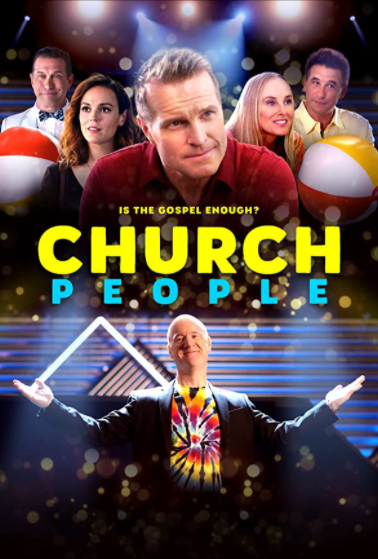 I normally have a pretty serious prejudice against the “Christian” movie genre. I’ve watched more than my fair share of them throughout the years and I generally dislike the genre. They lack the moral clarity of old Hollywood religious films like Meet John Doe or the Biblical scale of epics like Ben-Hur. They lack the somber meditation of a film like A Hidden Life or Silence. Even Mel Gibson’s films like The Passion of the Christ and Hacksaw Ridge dig deeper than your average independent “Christian” movie.

Nonetheless, I did give one a try recently. Did I hate it like the rest or did it moderately surprise me?

Violence/Scary Images: None.
Language/Crude Humor: None.
Drug/Alcohol References: None.
Sexual Content: Some awkward romantic situations and attractive women wearing low-cut clothing.
Spiritual Content: The movie is a Christian film that specifically addresses religious themes about problems within the church and individuals faith.
Other Negative Content: None.
Positive Content: Themes of redemption, family, love and proper faith.

I’ve had a pretty serious fatwa out against Christian films now for the better part of half a decade. I’m not sure I’ve actually seen a new film in the genre since Heaven is for Real in 2016. The only one I can think of is Unplanned (2019) and that movie was honestly more of a political film than a Christian film.

It’s probably not hard to figure out why. The genre has proven itself bereft of quality for over a decade now. While a handful of the films in the genre have proven themselves decent, it’s hard to point at the whole of a genre whose high water marks are God’s NOT Dead and War Room as being culturally significant. These films are made to preach to the choir and are completely disregarded by the rest of the culture.

That said, I actually did decide to give one a shot. Our friends over at The Babylon Bee recently interviewed the screenwriter Wes Halula prior to the release of his new Church People. The film recently escaped production troubles after an extensive development cycle and numerous rounds of scripting, getting a limited release in theaters through Fathom Events. I decided to forgo my apprehensions and give it a shot!

And let’s be clear, this is a film where the biggest celebrity cameos are Stephen Baldwin and the guy who played Turk on Scrubs…

Still, it was chuckle-worthy and amusing in so far as it’s self-aware enough not to take itself too seriously. The movie is, after all, about letting go of one’s pompous pretensions and living better for the Lord.

The story follows a prolific mega-church pastor who’s become cynical about his life. Guy Sides is a celebrity youth leader who travels around the country on gimmicky book tours who’s been somewhat sidelined as “The Beach Ball Guy” because of his willingness to sign beachballs and let his sermons turn into parties. Just as he’s feeling the urge to quit, he’s approached by his even more gimmicky lead pastor with an idea: in order to get more attention for the church, why don’t they literally crucify Guy for their Good Friday service?

Guy immediately hates this idea and starts throwing a fuss about how the church’s approach to the spectacle of flashy gimmicks is ruining their ability to speak truthfully about the word of Christ. Without Guy’s consent, Pastor Finney immediately turns to a gullible and impressionable teenage convert who believes that his own painful mock-crucifixion could lead more people to the Lord somehow.

Meanwhile, the church community is rocked by the arrival of two women onto the scene. Pastor Finney’s daughter, who has been serving as a missionary with her recently broken-off fiancee, is back in town and almost immediately starts crushing on Pastor Guy. Just as this happens, Pastor Guy’s estranged daughter from his first out-of-wedlock relationship appears and confronts him about being abandoned almost twenty years prior.

It’s not hard to tell what all this means and where it’s going. You know going into it there’s going to be a lot of awkward comedy, abruptly weird subplots and a sanctimonious final speech at the end where the main character teaches everyone the true meaning of Christianity through an epic speech and moment that gives the audience a visual signifier as to how they can replicate it in their own churches.

This last element is what film critic Tyler Smith would call an “emblem”; the physical takeaway from a Christian film that serves as the tangible lesson the film is asking its viewers to take away from it like the summary of a Sunday sermon. The film is very much asking its viewers what part of ourselves or the church at large is keeping us from truly engaging with the word of God.

This moral does give some weight to the film’s final scenes as that question is quite salient in Christian circles at the moment. Speaking for myself, I’ve met numerous young people from outside of the Church who have been interested in converting to Christianity but actively preferred Catholicism or Orthodox Christianity because they wanted to engage with the physical and external trappings of Christianity in a way that American-style Evangelical Christianity can’t offer.

For Christianity to be taken seriously, it does need to exist in a purer form than our modern consumer culture generally allows it to be.

These problems aren’t something that Church People articulates in great depth but it does sense that modern American Christianity is struggling with a spectacle and consumerism problem that’s choking mega-churches and watering down the gospel (which anyone who’s ever complained about Joel Olsteen on the internet can attest to).

The film overall is somewhat bumbling, if well-meaning, but it benefits from not taking itself nearly as seriously as its brethren. It’s the first one of these films I’ve seen in a while that doesn’t end with a toll-free phone number and a website to seek out at the end of the film to find out more information about <TOPIC>. It just ends with a cute joke about Christian humor (that I’m not exactly sure is accurate).

Church People probably would find a good audience with fans of other “Christian Movies” but, like those films, I’m not sure exactly who I’d recommend it to. It’s just awkward enough that it feels amateurish but just sincere enough that it’ll hit hard for a certain kind of religiously minded viewer.

Church People probably deserves to discover a modest audience among Christian filmgoers who like films like Do You Believe? or Miracles from Heaven. It's cute and harmless in the way those movies are but it doesn't really have any deeper ambitions other than trying to make Christians laugh. In so far as it would appeal to non-Christians, I would suspect it wouldn't appeal to most audiences.