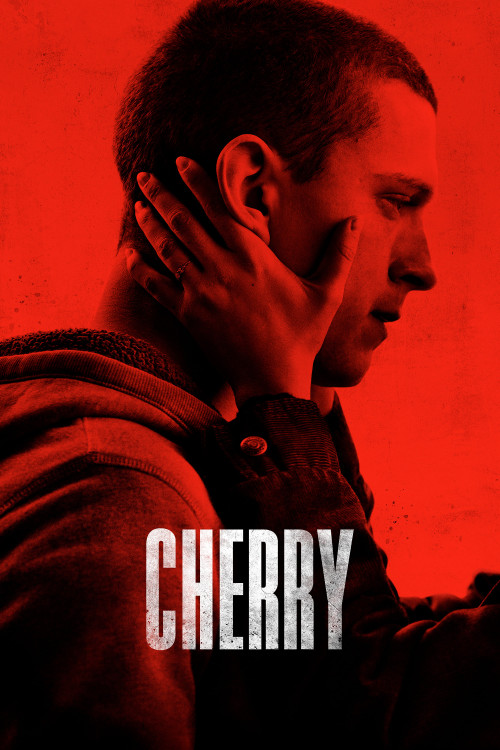 Cherry (2021) is the first film they’ve worked on following them becoming the most financially successful directors in cinematic history. With other projects such as their massive espionage film The Gray Man for Netflix incoming, this is the first taste of what their post-Marvel Studios filmmaking is going to look like.

Can the Russo Brothers scale back their talents to produce a smaller, more intimate character study or will their instincts for shooting massive action blockbusters intrude on the type of story they ought to be telling?

Violence/Scary Images: Violence and uncomfortable imagery throughout the movie; characters are depicted injecting needles and scenes of combat depict dead bodies and death sequences.
Language/Crude Humor: Heavy swearing and language throughout the film, including crude sexual references.
Drug/Alcohol References: A character works as a bartender; heavy drinking and drunkenness is depicted. The plot surrounds several characters becoming drug addicts and dealing with the fallout of drug usage.
Sexual Content: Out of wedlock sexuality, masturbation and partial nudity are depicted, although we don’t see full-body nudity at any point. Characters talk about their sexual frustrations.
Spiritual Content: None.
Other Negative Content: Themes of casual drug addiction, relationship violence and nihilism.
Positive Content: Themes of trying to overcome addiction and trauma.

I’ve been eagerly watching the careers of the Russo Brothers for years! I remember Joe and Anthony Russo from back on their days collaborating with Dan Harmon on Community and directing several of the best episodes of the series. Then they turned around and made a name for themselves directing Captain America and Avengers sequels, becoming the most financially successful directors in history.

As such, I’ve been genuinely curious as to where they’d go next and which projects they’d pursue. Last year they produced the mid-budget action film Extraction and got booked by Netflix to direct a $200 million espionage film called The Gray Man. That film just started filming this month with Ryan Gosling and Chris Evans and will likely release sometime next year. In addition to that, we now have their newest project which just released on Apple TV+, Cherry.

Based on the autobiography of Nico Walker of the same name, the film follows a man (Tom Holland) growing up in the early 2000s at the height of the Iraq War and the American Opioid Crisis. After performing a tour of duty, he returns home to his wife with severe PTSD and finds himself prescribed drugs to help ease his inability to sleep. Through this he became addicted to opioids, started shooting heroin to soothe his withdrawal symptoms, and then began robbing banks to pay for the new habits that he shares with his wife.

It’s curious to see this as the Russo Brothers’ first directorial debut after Avengers: Endgame two years ago. This feels almost exactly the opposite of their prior success. Instead of a bombastic blockbuster, we’re instead treated to a small-scale drama about addiction and war-trauma.

Oddly though, Cherry doesn’t feel small. It’s a film of epic cinematography, huge performances and heavy emotions. The camera swoops over every scene, captures every shot with depth and texture, and highlights the depth of every moment with its visual storytelling. Bank robberies and battlefields are filmed with the same scope as the airport battle in Captain America: Civil War.

The Russo Brothers carried all of their newly acquired filmmaking instincts and money over from Marvel Studios but don’t really change any of their habits to suit the new story they’re trying to tell. Even with a budget of only $40 million (half of Deadpool‘s budget and that film looked like it was shot in a parking lot), the film FEELS massive. That’s a credit to the Russo Brother’s and Tom Holland’s talent that they’re able to capture that feel so readily and clearly; they’re trying VERY hard to act and direct the heck out of this film.

That said, it all feels misplaced. The film has largely received middling to negative reviews since its limited theatrical release last month and it’s clear why that’s the case. The Russo Brothers’ instincts for filming action and superheroics is unquestioned, but they really don’t have much to SAY through their work and that’s made clear by the way the movie stylistically feels the same as their previous films. It’s even color-graded somewhat similarly.

In some ways, I suspect Cherry is the Russo Brothers’ first attempt at a “serious” film. Maybe they wanted a complete career pivot to prove they have more ambitious ideas and talents than just directing superhero/action films and picked the most inverse story they could have told. If it’s mimicking anything, its closest narrative comparison is Goodfellas for its overt use of narration and dark themes about the cost of crime, drug use and abuse.

Sadly, the movie doesn’t seem to have a deeper point to say about all these things. The story is broken up into five chapters that each focus on a different time period of his life from college, to Bootcamp, to serving in the Army during the Iraq War, to coming back to America and becoming a drug addict. It’s also bookended by a prologue and an epilogue that offer reveals about his ultimate fate and how he ends up once the story has come to a conclusion.

Weirdly though, I’m lost as to what exactly the film is SAYING about any of these things. The movie takes us through so many different life events that don’t meaningfully connect to each other and the film doesn’t build to any great catharsis or reveal. At times it feels like a coming of age film, a crime epic, a war movie and an arthouse movie about the banality of post-War on Terror/2008 Financial Crisis American life but the themes don’t really mesh. The film feels incredibly episodic and exists primarily to fuel the emotions of the immediate scene regardless of what’s happening.

The narration and background details scream suggestions of what they think is happening but there’s nothing insightful to the commentary. The lead complains about the horror of war, how much the Army sucks and explains what it’s like to suffer from PTSD. When he visits the bank, their logos are in-jokes that say things like “Sh*tty Bank” and such but the movie doesn’t call attention to it. It’s not done for the sake of being arty without the depth to back it up. It’s just a moment where the film is momentarily beating over the message of that scene to the viewer: war sucks, banks suck, drugs suck, growing up sucks, etc.

Without an overarching narrative though, the film feels like a plot in search of a story.

The Russo’s incredible talent with a camera and their ability to insert needle-drop music picks is still as good as ever but it’s hard to tell where this story is going. By the end, you realize that it’s a film without a punchline. The buildup of all these disparate themes and grievances merely leads to the main character growing a conscience and giving up his mistakes.  The movie just doesn’t earn any of its ideas or frame it within an important context that gives it meaning.

The clearest example of this came late in the film. Early in the film, our hero has an argument with a banker over overdraft fees and the banker is depicted entirely in shadow. When we see her late in the film, the light pans over her and we begin to see her face and humanity just as our hero starts falling into his temptations. The movie is clearly articulating the character’s struggle with his humanity and guilt over his actions via his relationship to the faceless bank teller but it never comes up again. We never see the same bank teller again so there’s no payoff. There’s no great moral at the end of the story where the two of them have a moment of coming to terms (we see a great example of this in Baby Driver where minor characters show up again during the final trial at the end of the film).

For a movie that’s trying to be a Goodfellas-style serious crime epic, it forgets the central lesson that made Goodfellas great: that movie had a point to say about the life of being a criminal. It tells us from the beginning that “I always wanted to be a gangster” and then lets every scene explore the nuances of every facet of a life of crime. The entire plot thematically alludes back to that one sentence. We think about the character’s initial lines late in the film when he’s a burnt-out, wife-beating, cocaine addict struggling to get by as a criminal while being stalked by the police. The irony of that film is that he gets exactly what he wants because what he wants is actually sinful, evil and soul-deadening.

Cherry has no moment like this. The title comes from a random line of dialogue during boot camp where a drill sergeant talks about “popping your cherry” which would suggest it’s a coming of age film or a film about waking up to the horrors of the world. Yet it’s not exactly a good coming of age story.  By the end, the film hasn’t earned a story about maturity. The only repeated lesson of the film seems to be that “life sucks”. Thus far, it’s been a story about falling into your temptations one compromise at a time. It’s a story about an average, nihilistic young man who could’ve been great but let himself fall into bad choices without a moment of self-reflection.

Unfortunately, a film like this doesn’t work unless it gives its character the ability to CHOOSE the path he walks down or at the very least offer an escape hatch. Without that, it’s merely a story about one innocent young man getting his face dragged through the muck until he can’t take it anymore and starts doing drugs to cope.

Cherry is an underwhelming return for the Russo Brothers following their immense success with Marvel Studios. If they don't find their voice with their subsequent projects, it appears that their success with superhero films would've been something of a fluke or a quirk rather than a match made in heaven.