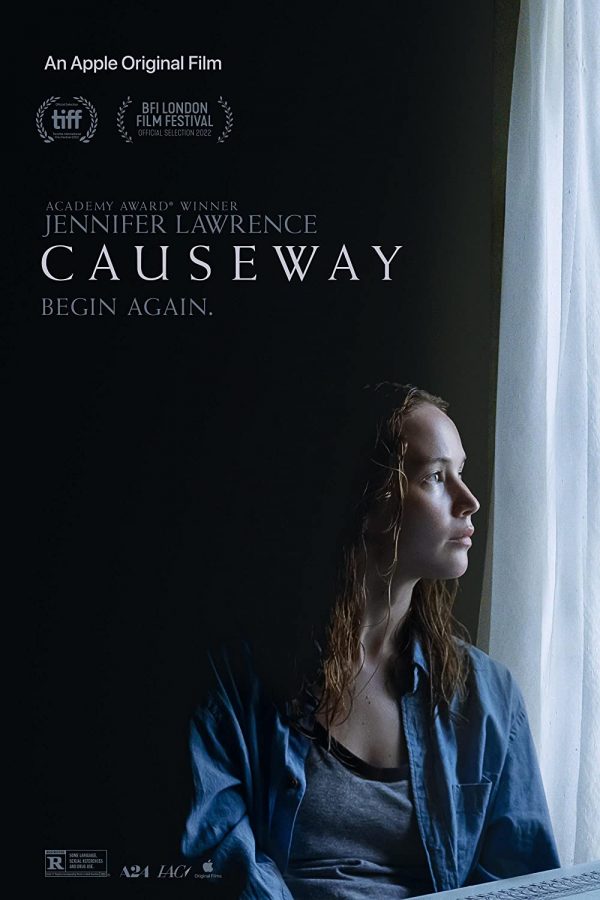 I don’t know if it is fortuitous or not that Causeway is coming out just over a year after the horrific withdrawal from Afghanistan. As it stands, September marked twenty-one years since the start of the war on terror and it is curious that we’re still making movies reflecting on a war that ended so dramatically—then again this isn’t the first time.

Violence/Scary Images: Limited to none.
Language/Crude Humor: Some heavy language and coarse discussion throughout the film.
Drug/Alcohol References: Some heavy drinking and drug use. Drugs are a major plot point in the film.
Sexual Content: The main character is a lesbian and strips down to a sports bra in several scenes.
Spiritual Content: Limited to none.
Other Negative Content: A character is sexually harassed. Characters suffer and struggle to see a possible future in their lives.
Positive Content: Themes of friendship, connection, and healing.

Causeway belongs to a mostly dead genre in modern Hollywood—the anti-war-on-terror drama. The genre of post-9/11 dramas like Lions for Lambs and Valley of Elah was made essentially as a form of protest art to contest the failures of the wars and the negative ramifications they were having on soldiers and civilians alike, here and abroad. These films were never popular but they were a fairly critically respected—if mildly sanctimonious—genre that approached the ongoing battles with deep derision towards the consequences of the war.

And certainly, there was a lot of negative things to be said about the War in Afghanistan, chief among them being how emotionally damaged America’s veterans came back from that war…

Causeway starts in media res with a young Army veteran returning to New Orleans to a military hospital where she is recovering from severe brain damage and physical stress after being injured by an IED explosion. The injury has permanently damaged her ability to function, slowing her reaction time and ability to concentrate to the point where she struggles to drive, hold down a job, or live without drugs.

The film is a fairly reserved character piece overall, focusing on Lynsey (Jennifer Lawrence) and James (Brian Tyree Henry) reflecting on their lives as people who had greater desires to leave their hometown and live grander lives, falling victim to circumstance.

The movie is a strong show for Jennifer Lawrence, who has mostly backed away from major acting roles for the last few years after her work on Mother!, Red Sparrow, and Don’t Look Up to focus on her family. It’s a more quiet role that calls back to her star-making performance in Winter’s Bone than her decade in the spotlight as Katniss Everdeen and Mystique. Given that she also produced the film for A24, it’s a clear sign of her desired trajectory as an actress—that she’s seeking serious attention and recognition as an actress apart from her blockbuster roles.

Again though, the timing of the film is what makes it feel most notable. The horrific images last year of refugees clinging to the sides of C130s as the Taliban reconverted the young republic into a tinpot theocracy drudged up A LOT of trauma from a generation of veterans who signed up to get back at the terrorists who killed 3,000 Americans in cold blood. In just a week, decades of sacrifice were destroyed.

Causeway is a very somber film, lacking anything flashy. There really aren’t any huge dramatic moments either as the characters are just too drugged out and sad to really get worked up. It’s honestly too reserved and oblique for its own good. It acknowledges the trauma of the war but without a clear sense of when the film takes place it’s hard to say if this is a film drudged up from the late-2000s or a movie directly commenting on our current post-war traumas.

The movie’s most notable reflection is Lynsey‘s desire to return to war, as if getting back to the job that destroyed her brain is all that matters to her because she has nothing else. There’s something to that, but it’s already an idea that films like The Hurt Locker have more meaningfully unpacked. Here, it’s just sad. Causeway has few answers. Lawrence and Henry carry what little the film has to offer but there isn’t much to the story beyond the listless purgatory of two lost souls getting high with little hope for the future.

Causeway is a film appropriate for the age of streaming, being mostly disposable but harmless. It's playing with sensitive themes given the subject matter and yet doesn't have much that's meaningful to say about them.