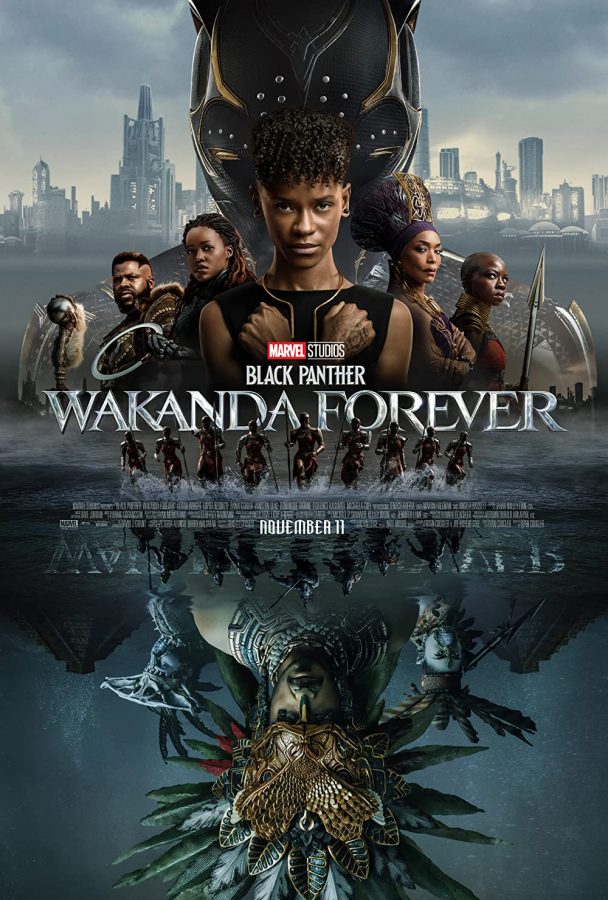 Black Panther: Wakanda Forever is the 30th film in the Marvel Cinematic Universe as well as the 7th and final film for Phase 4, which started with Black Widow last year.

This phase has certainly been odd for MCU fans. It’s had some genuine strengths like Shang-Chi and the Legend of the Ten Rings and Spider-Man: No Way Home, while the remainder like The Eternals, Doctor Strange in the Multiverse of Madness, and Thor: Love and Thunder were received mostly to mixed or negative audience reactions (although it seems my reviews for all three were typically more optimistic than general opinions). It will be curious to see if the devoted fans of the first Black Panther (2018) film will show up to support this film or if it is dismissed by MCU fans.

Violence/Scary Images: No gore or extreme violence but some frightening images of battles, including death and injury.
Language/Crude Humor: Some severe language including s***.
Drug/Alcohol References: None.
Sexual Content: Some scantily dressed female characters. Two women implicitly in a relationship kiss each other.
Spiritual Content: A Catholic priest is murdered in a flashback. The film explores ancestor worship and a Pagan version of the afterlife, and one character is worshipped as a demigod.
Other Negative Content: Themes of hatred, violence, war, and death.
Positive Content: Themes of forgiveness, justice, and peace.

I don’t envy the position that writer/director Ryan Coogler must’ve found himself in August 2020 with the death of Chadwick Boseman. Few actors have the reputation for being a perfect mensch quite like he did. He was an active Christian, a deeply philanthropic person, and an actor who used his celebrity status to take on huge inspiring roles like Jackie Robinson in 42, James Brown in Get On Up, Thurgood Marshall in Marshall, and King T’Challa in four MCU films. He worked in movies like Da 5 Bloods and Ma Rainey’s Black Bottom almost up until his death from colon cancer at the age of forty-three.

Few films can survive having to be a sequel to a massively popular and successful film like the first Black Panther, but fewer films survive losing the main character of their series. I can thus excuse Black Panther: Wakanda Forever for feeling like a film that preemptively had the wind knocked out of it. This obviously isn’t the kind of sequel anyone involved with the production wanted to make, but you can’t just ignore the fact that your main character has died offscreen.

I am happy to say though that the movie does mostly come together in the end. Whatever you think of the original Black Panther—that it’s either one of the greatest blockbusters of the 2010s or an overrated MCU film—its sequel was in an unenviable position and manages to mostly come across as an ambitious work greater than the sum of its parts.

The film is set a year after the events of Avengers: Endgame. Shortly after being resurrected by the Infinity Gauntlet, T’Challa contracts an unstated illness offscreen and passes away. His sister Shuri is arguably the hardest hit by his death, struggling months later with an inability to move on and a pervasive sense that she should’ve found a way to save him using her scientific prowess.

When a young MIT scientist named Riri Williams succeeds in developing technology capable of finding a hidden vein of vibranium on the ocean floor, Shuri and her mother find themselves confronted by the mysterious demigod-like Namor, the king of the underwater civilization of Talokan—descendants of a Mayan civilization who also gained access to vibranium and built a hidden paradise under the seas. Namor demands Shuri deliver the scientist to him and form an alliance against the surface world.

There are a lot of ideas in Black Panther: Wakanda Forever, and at times it feels like Coogler is throwing them at the wall to see what sticks. The film explores grief, the relationship between spirituality and science, the morality of vengeance, mother-daughter relationships, and the complicated relationships between oppressed groups of people and how they can or can’t align against their oppressors. Most of these ideas don’t quite work by themselves though.

A lot of the ideas in this film are recycled from the first film and Namor more or less feels like an attempt to make the Killmonger lightning strike twice. Tenoch Huerta does an admirable job though holding up one of the more cryptic, empathetic, and intimidating foes in a recent MCU film. Riri Williams as a character though has hardly anything to do and ends up being a plot device, only showing up to set up her role as the MCU’s next Iron Man.

It helps the film that Coogler did a lot of the nuts-and-bolts worldbuilding necessary to get this film off the ground. One of the film’s most interesting ideas is that Wakanda is in a very strange position as both the most powerful nation in the world and also a nation that is vulnerable. Kilmonger’s actions have destroyed the ability of the nation to ritually create new Black Panthers. The country still has powerful weapons and strong rulers but without a powerful protector, there is little to stop a superhuman from making serious threats.

Initially, this setup actually serves Shuri well. As the last descendent of his bloodline, she’s the rightful inheritor of the throne after her mother, and yet she’s mostly focused on her scientific work, considering the Black Panther to be an archaic ritual. Given she took on a more scientific pursuit, the movie leans into that in this film and makes her conflict that of a modern materialistic young woman struggling to grasp the spiritual significance of her family’s Pagan ancestor worship and spiritual beliefs, which make her feel more disconnected and alienated from the past than the rest of her family.

Again though, I don’t think a lot of these ideas received the focus they needed to work entirely on their own terms. Shuri and most of the side characters in the first film get a much larger spotlight and more interesting character development than we’ve seen previously, which works and is a testament to the strength of the first film that so much potential was left just on the margins. The film feels like it is missing the heart of the first movie but leaning into the real-life tragedy of Boseman’s death awarded the film needed pathos and helps it mostly stick the landing as a messy but touching blockbuster.

Kudos that this film had the good sense to not end on a post-credits stinger and let the story speak for itself.

Black Panther: Wakanda Forever is a film that likely couldn't have lived up to the hype of its predecessor, but director Ryan Coogler does his best to make the challenging situation into a meaningful memorial for the sadly deceased actor.