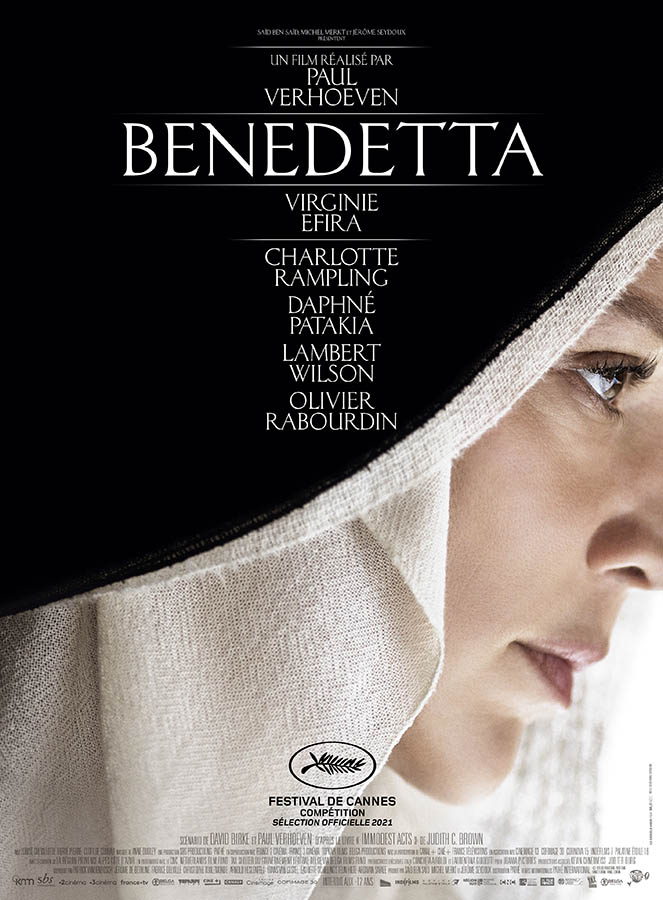 There’s a curious trend happening at the margins of the film industry in the past year. Between David Lowry’s The Green Knight, Ridley Scott’s The Last Duel, and now Paul Verhoeven’s Benedetta, there has been a strange set of anti-medieval films released in theatres. I couldn’t begin to tell you why directors as diverse as Ridley Scott and Paul Verhoeven independently decided to satirize the middle ages but the timing has been fascinating.

As a writer with several professional and amateur medieval scholars and medievalists in his personal life, the trend speaks to modern prejudices trying to reassert themselves against the possibility of religious revival. On the fringe of society, medievalism is popular as a rallying point for traditional Catholics and antimodernists. It serves as a way to look at the world through religious and symbolic eyes.

Maybe there’s some connection between that and these three directors making anti-medieval films but it’s hard to say. Scott, Lowry, and Verhoeven are filmmakers from different generations and cultures with little connecting them. Regardless, their thematic similarities are fascinating. The middle ages are a deeply misunderstood time in history, as anyone who has ever read Barbara Tuchman’s Distant Mirror can tell you. It’s all too easy to look back on those times with an air of snobbish post-enlightenment pride and think that we know better than the rubes and ideologues who let the world be run by patriarchal, theocratic tyrants.

Ultimately, that’s the atmosphere where a film as strange and provocative as Benedetta gets made.

Violence/Scary Images: Some intense and violent images; frequent depictions of blood and open wounds, a man dresses as Christ appears in several scenes and saves a woman by murdering people with a sword, a woman is violently tortured (off screen).
Language/Crude Humor:  Some heavy language in French.
Sexual Content: Extreme sexual content including frequent full-frontal nudity, two graphic softcore sex scenes, and sexual assault.
Drug/Alcohol Use: Characters drink wine frequently.
Spiritual Content: Themes of religious visions, damnation and miracles. The film is about nuns and Catholic convents dealing with internal church politics.
Other Negative Themes: Intense sexual content and depictions that will likely bother most Christian audiences.
Positive Content: Themes of faith, salvation, and learning to connect with God.

Most Americans know Paul Verhoeven as a contemporary blockbuster director of the 1990s. In that regard, he’s very well-liked as the director of Robocop, Total Recall, Starship Troopers, Basic Instinct, and Show Girls. Movie watchers outside of the United States would likely tell you a different story. Verhoeven is one of the most fairly controversial directors alive. His early Dutch work and contemporary French films contain a long string of depictions of sexual assault, masturbation, graphic violence, and a willingness to tap dance around sensitive political issues. He’s a contradictory and somewhat self-absorbed artist with a penchant for hypocrisy. He’s a materialist who loves mysticism. He’s a feminist who gets accused of taking advantage of his actresses.

Verhoeven is complicated and his non-English films like Turkish Delight, Katie Teppel, Flesh and Blood, and Elle reflect his controversial personality. Some of his films are so graphic that his home country of the Netherlands has had to write new film laws to ban his films. His newest film is very much in that vein.

Benedetta is based on the book Immodest Acts: The Life of a Lesbian Nun in Renaissance Italy and concerns the life of the real-life sister Benedetta Carlini; a self-proclaimed mystic Catholic nun from France whose visions of Christ landed her in trouble with the Catholic Church, with help from the fact that she was having a lesbian affair.

The film is a strange mix of dark comedy and religious epic, one and that explores the situation as a way of dramatizing the themes that Paul Verhoeven is very publicly famous for, namely his strange fascination with Christianity. Verhoeven is an atheist, as I discussed in my review of his book Jesus of Nazareth, but he contains a strange begrudging fascination with mysticism. Can it almost be called it a perversion? He takes pride in his materialism while indulging his fascination with mystery and the supernatural.

Benedetta dramatizes a very curious theme in that regard: the tension between spirituality and organized religion.

The film’s story starts with the introduction of its character Benedetta, who is revealed very early on in the film to be something of a mystic with a strange connection to the Virgin Mary and Christ himself, to whom she literally considers herself a bride. When a young street urchin is brought into her religious convent, she begins experiencing intense dreams and visions of Jesus at the same time that the woman starts drawing her into a lesbian sexual affair.

The film draws a clear line between her sexual exploration and her religious enlightenment. Despite being an atheist, Verhoeven seems to make it very clear that Benedetta is experiencing some kind of sincere religious experience. Clearly, her homosexual inclinations and disregard for the hierarchy of the Catholic Church put her in the sights of an aggressive prosecutor who charges her with blasphemy and sentences her to death.

There’s an interesting discussion to be had about Paul Verhoeven‘s interest in spirituality and distrust of organized religion but any discussion of Benedetta is ultimately going to stop at the film‘s content. The film is essentially an exploitation film with softcore pornographic elements, intense violence, and overtly profane disregard for religious imagery.

That’s not an accident on Verhoeven’s front. He isn’t merely asking difficult questions to challenge the audience. He shot multiple graphic sex scenes, including scenes that sexualize Jesus on the cross, and Catholic icons are sexualized as sex toys. There are multiple scenes of characters farting as if to make the film’s full intentions clear. Verhoeven is clearly trying to get a reaction out of his audience in equal proportion to the degree that he’s trying to say something about the limitations of organized religion.

It’s not surprising then that Benedetta has a reputation as one of the most controversial films of 2021. Its trailer and release announcement this past summer was met with widespread condemnations of its content among Catholic audiences who considered the project belligerent and grotesque. It’s not hard to see why either. Verhoeven has made it clear that he considers his critics to be puritans. The film itself regards the religious faithful who don’t follow sister Benedetta to be cruel and vicious, to the point where they’re literally damned to Hell.

It probably says something that the modest audience at my screening laughed at the religious characters rather than with them.

Benedetta is the work of a madman. It’s a bizzarre and contemplative work that is almost pathologically designed to alienate the audience to whom it’s satirizing. The film all but lionizes its transgressive female lead as a Christ-figure with the power to see the future and return from the dead. The film is literally inverting the religious hierarchies by laughing at the sacred and honoring the profane, from a traditionalist point of view. It’s a film designed to degrade the pious Catholics that watch it, and laugh at them behind their back as it brags about the piety of its central character.

I respect Verhoeven a great deal as a director, and as someone who directed a handful of my favorite movies, I will say that it is a well-directed film, but that’s all I can say because it’s not a film designed to dialogue and converse with its audience. It’s a practical joke.

+ Solid script and themes about religion

Benedetta is a film that I can only recommend to people in extreme margins. It's a work of overt sexuality and violence that advocates extremely heterodox ideas.