Review – Army of the Dead 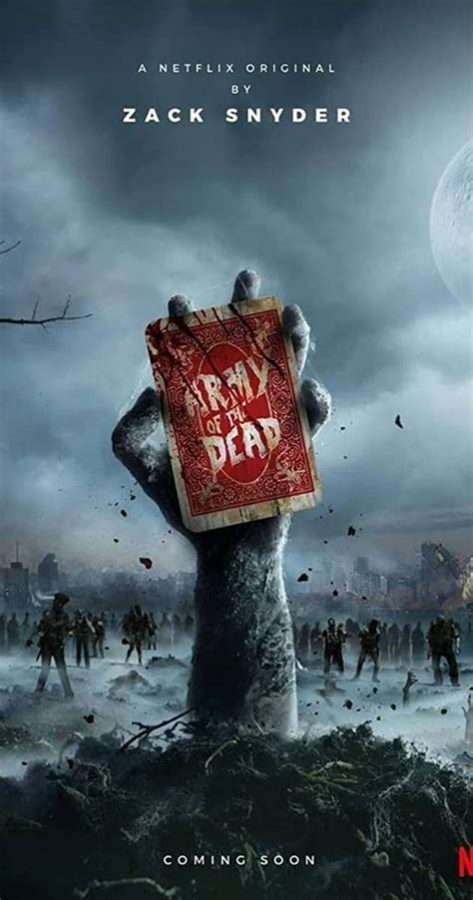 2021 is the year of Zack Snyder! Just two months ago, his new cut of Justice League was released to acclaim and widespread popularity on HBO Max. Now his first new film since 2017 is about to drop on Netflix!

Army of the Dead has been a project trapped in development for more than a decade. It’s been passed between multiple studios and directors before ultimately being bought by Netflix, rewritten by Snyder’s people, and finally shot. As his first fully NEW project since the three DCEU films he shot between 2012-2017, it’s interesting to see exactly what this film represents for Snyder’s career. Considering that we’re seeing this drop online just two months after the Snyder-Cut, what does this modest zombie flick have to offer or tell us about Snyder’s future projects?

Violence/Scary Images: Significant and extreme blood and gore throughout; characters are shot, crushed and explode into gushes of blood and gore. Characters are painfully bitten by zombies.
Language/Crude Humor: Severe language throughout the film.
Drug/Alcohol References: Some casual drinking portrayed.
Sexual Content: Some gratuitous nudity; several topless women are shown in one scene. One character is accused of being a rapist.
Spiritual Content: None.
Other Negative Content: Themes of human rights violations, violence and murder.
Positive Content: Themes of selflessness, family and preserving life.

The zombie genre is pretty played out at this point. Outside of a few highlights like Shaun of the Dead, Blood Quantum and Train to Busan (plus people I generally trust really like One Cut of the Dead but I didn’t get it), it’s pretty exceptionally hard to find a new way to make the genre interesting in a Post-George Romero world. That said, the genre remains the most popular genre in the entertainment industry. The Walking Dead is one of the most popular TV shows of all time. Video games with zombies and zombie modes, like Call of Duty, Dying Light, Dead Island, Left for Dead, Days Gone or Red Dead Redemption: Undead Nightmare, are among the most popular games of the last two generations of gaming. People don’t seem to get sick of the genre.

It’s probably for that reason that Zack Snyder decided to use the genre for his new comeback film. Following his dropping out of Justice League due to the tragic death of his daughter, Snyder hadn’t produced a new film in years. Obviously, he needed time to heal and spend time with his family. As a secondary problem though, Warner Brothers no longer wanted to work with him. His style and storytelling were a liability to the kinds of stories they thought might make them more money. As a result, he was forced to follow trends and pitch his comeback film to Netflix.

Considering that he had previously directed the remake of Dawn of the Dead, a project like this represents a kind of return to basics for Snyder. With a $90 million budget, this is a much smaller project than any of his DC projects and represents Snyder attempting to reestablish his skill as an action director without the benefit of a major studio behind him.

Army of the Dead is also a nominal attempt to play with the genre of the zombie film by adding a new twist on it: it’s also a heist movie. It’s not necessarily an original twist. Last year’s Peninsula used the same concept but this film has also been in development for much longer (originally pitched in 2007) than the South Korean movie so I’m willing to assume this is the more original out of the two films.

The movie is set in the aftermath of a contained zombie apocalypse in Las Vegas. The city was walled off with shipping containers after an outbreak consumed the city. Only a few hundred survivors of the outbreak are still alive and being forced by the government to live in quarantine camps until they can prove that they’re not a danger to the outside world. When a group of businessmen and generals realize there are millions of dollars in cash buried in the surviving vaults downtown, they hire a retired veteran to sneak into the zone with a team, retrieve their money and bring it back so they can all get rich.

As the team enters the zone though, things immediately start going wrong. It quickly becomes clear there’s more going on within the area than they are first lead to believe. The motivations of the people brought in slowly begin to unfurl as they realize not everybody is fully committed to the original plan. Some of them have ulterior motives and immediately people start dying.

Much of the framing and setting is lined with fairly weak attempts at social commentary. There is some light Trump-esc social commentary about “building walls” and imprisoning refugees but the movie never really commits to those ideas. There are a few racist cop characters who make disparaging references towards Latino members of the quarantine zone and one character works as a “coyote” smuggling people across the wall into the exclusion zone. At the same time, the unnamed and unseen President, with an extremely low approval rating and a very crass way of speaking, wants to detonate a nuke and obliterate the zombie menace once and for all on the Fourth of July. There’s a ticking timebomb element to the story as these characters know that the entire city will be going up in smoke based on the whim of an erratic and impulsive President’s decisions.

For the most part, this is just set dressing. The heist story itself is fairly unmotivated beyond the fact that the different members of the team all just want some extra money. As a result, a story that could be nominally ABOUT the nature of greed and how political decision-making drips down into the lives of the lower class feels underdeveloped.

Absent the framing device, there’s not much necessarily surprising to the story. If you’ve seen one heist film, you’ve seen this. They build a team, plan the heist, it goes wrong, and because it’s a zombie film the huge cast starts getting picked off one by one until only a few characters remain. The film’s cast is lined with your usual collection of rejects and survivor archetypes but there’s not much flavor to their performances to add the needed pathos to the story. Dave Bautista does an admirable job as the film’s action lead, playing up his soldiering with a Schwarzenegger-esc bravado, but he doesn’t really have any reason to take the gig besides wanting to find a new job. Tig Notaro, late of Star Trek: Discovery, probably does the best of any character in the film playing up her average-person-in-a-tough-spot gruffness with some underlying character work.

Undeveloped just seems to be the best way to describe it. It’s not bad but the film needed more work to conceptually come together into something tight or slick. You can even see that in the tone. The film is nominally trying to lean into its premise as though it were a comedy. The tone is relatively lighthearted, the gore is over the top and silly, and the song choices play up the goofiness. It never fully commits to being a comedy though and adds tons of “emotional” and “tense” scenes to break up the 2.5-hour screentime. This might’ve been a movie that could’ve benefitted from a hacked-to-the-bone 90-minute lean cut.

Like any Zack Snyder film, it’s overlong, high-minded, action-heavy and somewhat meandering. I wouldn’t call it a bad film in any regard and I certainly think it’s tighter work than he’s delivered on in a while. That said, Army of the Dead hardly competes with his best works like 300 or Watchmen. Coming in the immediate aftermath of Justice League, the film also feels very underwhelming. It’s clear this film was supposed to pave the way for him to earn his way back into Hollywood’s good graces by proving that he was capable of working on a budget and producing quality work. Honestly, my biggest takeaway from the film is that he already made his big power play with Justice League. This feels like an afterthought now.

It will be curious to see how Snyder leverages these two films in the near future. He’s rumored to be developing a Revolutionary War movie and a King Arthur movie at the moment and DCEU fans are still clamoring for him to come back and direct Justice League 2. We’ll just have to wait and see what gets announced next!

Army of the Dead will probably wet the tongues of zombie fans looking for their newest fix but I'm not sure it'll impress most people. It's a solid action flick but it probably won't be in the pop culture discussion for more than a few weeks.