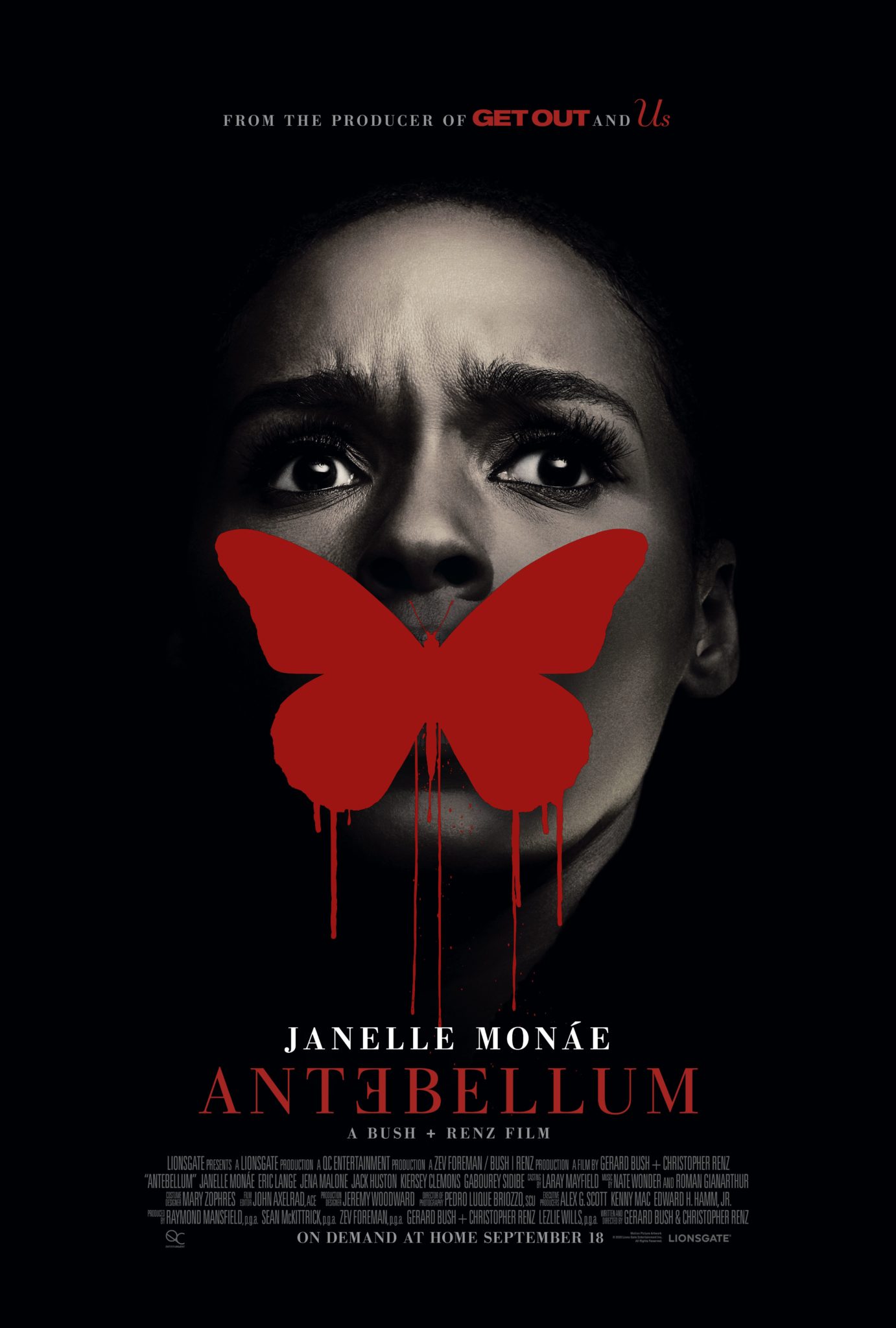 Yes, here we are again—yet another movie about slavery. Cue the Ancestral Negro Groan after we eye-rolled at the spectacle that is Harriet. Though Luke Cage taught us “Never backward; always forward,” we seem incapable of letting go of the past; then again, the past seems to not let go of us, either. After all, Antebellum alludes to William Faulkner’s famous quote, “The past is never dead. It’s not even past.”

Language and Crude Humor: One slaver/soldier enjoys punctuating his lines with f-bombs and other vulgarities. I am relieved to report that in a movie about slavery, the N-word is used sparingly. Plenty of euphemisms take its place, however. As my friends would say, “They said ‘darkie’ with a hard ‘R’.”

In contrast to the oppressively crude and cruel slavers, in another setting entirely, a certain woman embraces her lewdness. In one scene, this character playfully snatches her friend’s phone to look for any potential “dick picks” that her friend’s husband might have sent. Later, at a restaurant, she says that a man at the bar who buys her a drink is “eye f***ing” her.

Drugs and Alcohol Use: During a girls’ night out, the ladies order a specific, (expensive, perhaps; they reject the waiter’s suggestion for something else, but I am not a whino) Champagne, and get lit. A slaver smokes a cigar in satisfaction after raping a woman; another slaver vapes. Wait, what?!?!

(Sexual) Violence: In one scene, the camera focuses on a bed footboard shaking as a white man grunts repeatedly. It pans out to show him as he rolls over, exhausted and appeased, with his black female victim paralyzed from his violation, shedding silent tears. It is likely this pattern goes on for at least six weeks. In a different scene, another man requests that a slave “Sapphire”  woman meet him in her cabins, but for undisclosed reasons, he is unable to do the deed. His chosen woman to rape mistakes his hesitation for mercy, and beats her viciously, causing her to suffer a miscarriage the next day.

“Sapphire” is the incorrect stereotype; “Jezebel” should have been the operative word in the context of the general’s intentions.

(Physical) Violence: The film opens with a man in a pronged collar trying to fight off slavers as he is separated from his female companion. She tries to run, and she is lassoed around the neck and shot in the head, a tell-tell sign that Antebellum is doing strange work because a Confederate soldier’s pay was $7 per month, and a female slave could fetch $700. Slave owners were compensated if their “property” was damaged, but this does not happen in this movie. Her corpse is then burned to ash in an outdoor furnace.

A Confederate soldier beats a newly-captured slave, commanding her to recognize her new slave name. She refuses, and he brands her as if she were cattle. A slave woman hangs herself, and several individuals suffer wounds from bladed weapons. The audience can expect to witness an abduction.

In truth, I expected gratuitous physical violence in Antebellum as is appropriate for a film depicting scenes of slavery, but the violence here is somewhat mild. Instead, the film focuses acutely on the kind of violence that begins as ideological warfare—a series of microtransgressions that fully-evolves beyond discrimination, becoming a mode of subjugation. The consequential feelings of loss and hopelessness take visual root.

Racism and Bigotry: Read on, lest I end up putting the cart before the horse.

Antebellum opens with a long, continuous shot of plantation life as if to illustrate the daily goings-on of the pre-Civil War South, from the fields, to the big house, to the shacks. However, Confederate soldiers overrun this plantation, creating an anachronistic visual for a film whose title essentially means “Befo’ de War.” One soldier stops at a shanty to offload his cargo of human chattel from his horse. It is Janelle Monáe, whose character then sits up as though awakened from her torpor, only to discover that she now resides in a living nightmare. Antebellum then proceeds to follow her and her daily activities on the plantation, which includes being named Eden, picking cotton, staring listlessly into the ether, and getting raped—all in complete silence. This cycle continues until one night, after another rape, “Eden” hears a cell phone ring.

Antebellum then inflicts its audience with visual and narrative whiplash as it spontaneously shifts to Janelle Monáe in a completely different environment. Now answering to Veronica Henley instead of “Eden,” this persona is a renowned author, activist, wife, and mother of one. Business requires her to travel for a conference, after which she meets up with her friends, the most noteworthy being Dawn (Gabourey Sidibe). Through these interactions, the film all bout outright requires Veronica to look into the camera and proclaim with sauce that she is an uppity negro, and she cannot stop, will not stop.

Beware of little white girls who play with pickaninny dolls.

So how does Antebellum bind together the lives of a modern-day black woman and that of a pre-Emancipation Procolomation slave? Clumsily. I think what it is trying to perform is some cultural forecasting. The Faulkner quote is misleading; Antebellum deploys it like when a high school student uses a quote out of context in an 11th grade English paper just because they think it sounds cool. So allow me to provide a better coupling: Antebellum is not so much an instance of “Those who cannot remember the past are condemned to repeat it,” but rather, a warning of what “The South Will Rise Again” might look like. This is the “horror” of the film—what America looks like if it were “Made Great Again.”

I think that is the film’s takeaway—race relations in the US are delicate and tenuous. The ambitious delusions of a few (or many) white supremacists could result in Eden’s living nightmare. Therefore, we must remain vigilant, and snuff out white supremacy whenever and wherever it dares to step out of the shadows, lest it may take us captive. Yes, us, in the plural, because as Robin DiAngelo says in White Fragility, there is no neutrality—only active and passive participants in white supremacy.

And then Antebellum shifts again, into a sequence that feels like it was cut out of Django Unchained or Nate Parker’s 2016 The Birth of a Nation. I do think it is significant that a female lead gets to play action hero at the conclusion of a…horror? But Antebellum does not earn its victory, because it lacks endearing, moving moments that make me feel attached to Monáe’s personas. For example, in 12 Years a Slave when everyone is asleep, a slave woman inexplicably seizes Solomon Northup’s (Chiwetel Ejiofor) hand and masturbates with it in a feeble attempt to exercise what meager agency she has, until she climaxes and rolls over while weeping in despair of her predicament, while Northrup stares into the heavens, in fear and bewilderment of his newfound circumstances.

In contrast, Antebellum establishes the humanity of its victims outside of the peculiar institution. I think this creative choice creates a message that could be misinterpreted, that only the best of us, rather than all of us, have value. Additionally problematic is how Antebellum denies the audience evidence of how slaves managed to endure the grave injustices inflicted upon them by their white oppressors. In this film, slaves simply suffer in silence, and in perpetuity. Escape happens through a series of coincidences, rather than the execution of cleverly-conceived systems that required discretion and skill to undermine the peculiar institution (the Underground Railroad).

Antebellum tries to do too much, and therefore, does not capitalize upon its potential for meta-criticism. For example, the movie shifts scenes between the two Monáes, the sass of Gabourey Sidibe’s character in “modern-day” steals the limelight. Where Berard Bush and Christopher Renz are supposed to be bringing the audience closer to Veronica, Dawn’s personality simply overshadows everything. Perhaps she should have been the main character, though this suggestion opens the floodgates of whether plus-sized, dark-skinned women are as desirable as the petite Monáe. On the plantation, the first and only dark-skinned woman (the first screenshot in this review), is summarily executed. Are Bush and Renz critiquing colorism, or are they participants in its enterprise? Additionally, as per the horror trope, one should expect a monster of some sorts. The twist in Antebellum, is that the monster is not the obvious one, but the complicit, enabling one that appears to be the least dangerous, but is the most dangerous of all! While this movie makes for poor entertainment, it does offer some conversation pieces that might be more interesting than the movie itself.

Marketing for Antebellum aside, it is clear that Bush and Renz were inspired by Get Out, and made an ungainly attempt at devising a derivative alternate reality where the monster is ultimately whiteness. I think the producers would have been better served to have contacted Octavia Butler’s estate to acquire the rights to Kindred, which cannot have enough adaptations. After all, that is what critics were expecting out of Antebellum in the first place. What we got here instead is an obtuse rendition of Taken.

+ Hmm...looks great in 4K?
+ Gabourey Sidibe's depiction of Dawn needs her own movie

For the same $20 it costs to watch Antebellum, you can buy a hardcover of Damian Duffy's Kindred: A Graphic Novel Adaptation. Do that instead.