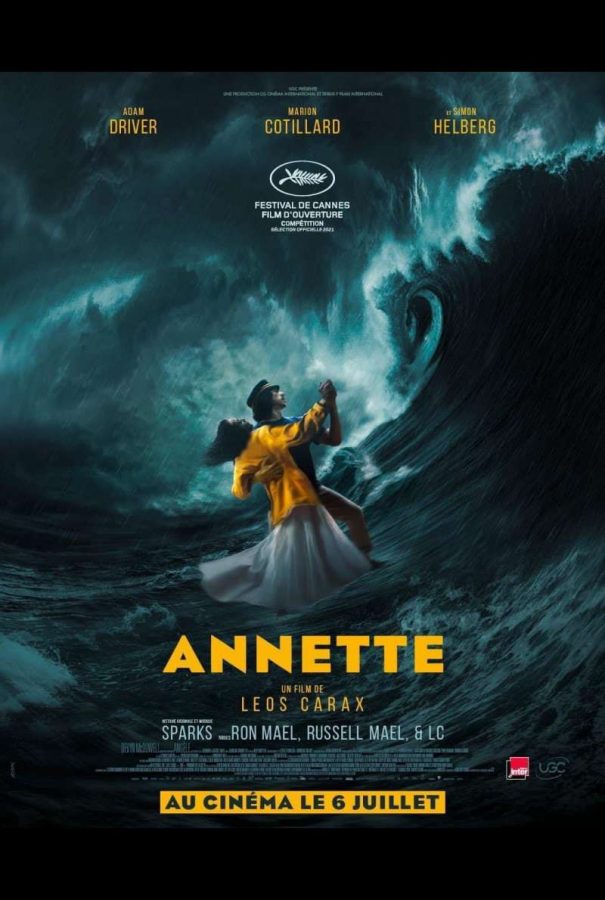 Last month I reviewed Leos Carax’s Holy Motors. His bizarre surrealist 2012 masterpiece stands as one of the weirdest works to come out of international cinema in the last decade. Now he’s finally back almost a decade later with his newest film, Annette. After a short limited release theatrical run, the film was released on Amazon Prime on August 20th. Now audiences can gaze in abject bewilderment at this prickly, dark, and VERY French arthouse musical!

I don’t know why I expected Annette to be a slightly more relaxed or diegetic story than Holy Motors. Maybe I just didn’t assume a movie could top the surreal craziness of Leos Carax’s previous film. Alas, Annette is every bit as strange as its predecessor. Maybe more so…?

The movie starts out with the director Leos Carax in a recording booth recording the opening number to the film itself called “So May We Start.” Then the film cuts to its main character Henry McHenry performing a set at a comedy club. Just when it seems like the film might pull back and reveal some level of reality, he starts rambling deranged rants about how he’s psychologically manipulating the crowd with his job while the crowd roars uproariously.

This sets up one of the film’s strangest motifs: all of the characters are constantly singing the subtext of their relationships and motivations in their dialogue. I suspect this is a very post-modern way to approach the traditional high melodrama and camp of contemporary Broadway musicals. Make no mistake, Annette is a musical first and foremost. The fact that there are characters who are belting their deepest motivations and secrets is just goofing on the reality that this is what a musical does anyway.

The nominal story is rather straightforward in spite of itself. Once the gimmick becomes clear, we start to see the love story being belted out. Henry (Adam Driver) and his lover (Marion Cotillard) are respectively a comedian and an opera singer living in Hollywood. The couple has fallen deeply in love but there’s a lot of unstated anxiety between them that becomes worse when they have a baby named Annette together. Subsequently, Henry’s wife dies in a tragic boating accident and leaves Henry fearing that he was at fault for her death. In his grief, he discovers his daughter Annette is actually an incredibly talented vocalist and he decides to start touring her around the world as a miraculous singer with the help of his composer friend, known simply as “The Accompanist” in the credits (Simon Helberg).

Laid out simply, there’s a lot that’s familiar about Annette as a story. It’s La La Land as reinterpreted by the dark surrealism of a film like The Killing of a Sacred Deer. Thematically though, I suspect David Lynch’s Eraserhead is the most notable cinematic comparison in that it’s a surreal film about a young man’s anxieties with fatherhood, love, sex, and commitment. More than any of those things though, Annette ultimately becomes a movie about guilt and the fear of one’s self.

Henry sets himself up early in the film as something of an exploitative figure. He makes a joke offhand at first that the point of comedy is that it allows you to exploit others without killing them. Quickly though, this remark becomes more serious in light of the way his exploitative nature begins affecting others. At one point early in the film, the older Annette has a dream that Henry is being exposed as a sexual predator by women he’s worked with within Hollywood. The accompanist complains to Henry that he’s exploiting Annette’s talent to solve his financial issues.

Thematically though, this is most explicitly expressed in Baby Annette herself. For the majority of the film, the character is portrayed as a wooden marionette doll. She’s literally seen by her father as a piece of wood to be controlled for his own benefit. When the film finally does portray her as a real actress, the meaning becomes clear: this is the moment when Henry finally sees her as a full person to whom he has to answer.

I can’t help but suspect there are more of the autobiographical elements we saw in Holy Motors being sewn into the story. Carax does appear again at the film’s introduction and once again there’s a clear father-daughter subtext to the story that loosely correlated to his own life circumstances (his wife committed suicide in 2011). Once again, the implication is that the film is a kind of dialogue with him at the helm. Maybe the most obvious read of the film is to say it’s a movie about being a father and feeling like you’ve failed in the aftermath of your wife’s passing, and presenting that as a fear that you’ve become a monster.

Thematically, that lines up very close to his most transcendental ideas. Carax is a very brave director and it seems he really wants to dig deep in his new films and explore the ugly self-loathing and fears that drive him in light of what has happened in his life. Annette‘s plot suggests that he not only feels estranged from his daughter but that his daughter ought to hate him for his actions. He seems to be implying that he’s beyond reproach, unforgivable and that the fear of becoming a bad father has turned him into a bad father. Film Crit Hulk put it best when he said that Annette is clearly a film about “survivor’s guilt”.

I can’t speak to Carax’s real-life choices. As always, he remains a quirky and self-aware director that wants to create strange and quirky works of art. The movie notably starts with gags and instructions for the audience to fart and breathe prior to the movie commencing so they don’t interrupt the performance. As bleak and prickly as the film’s story and presentation are, it’s hard not to respect just how deeply Carax is trying to dig down deep.

At the end of the day, Annette is telling a very simple story in a very complex way. It’s a traditional Hollywood story about how ambition, jealousy, and greed undo great and powerful men. It’s also a deeply postmodern work of French self-loathing arthouse cinema. It’s unpleasant to watch and feels almost too artificial to feel earnest. It DEFINITELY would never appeal to casual audiences. That said, there’s a quietly beautiful film buried somewhere under the strange artifice and music.

Annette is certainly not a story for everyone. Many people who I respect have said that it's a pretentious, boring slog of a film. That said, once you work out the film's dark heart, it opens up into something strange and possibly brilliant if you can't allow yourself to work with it.