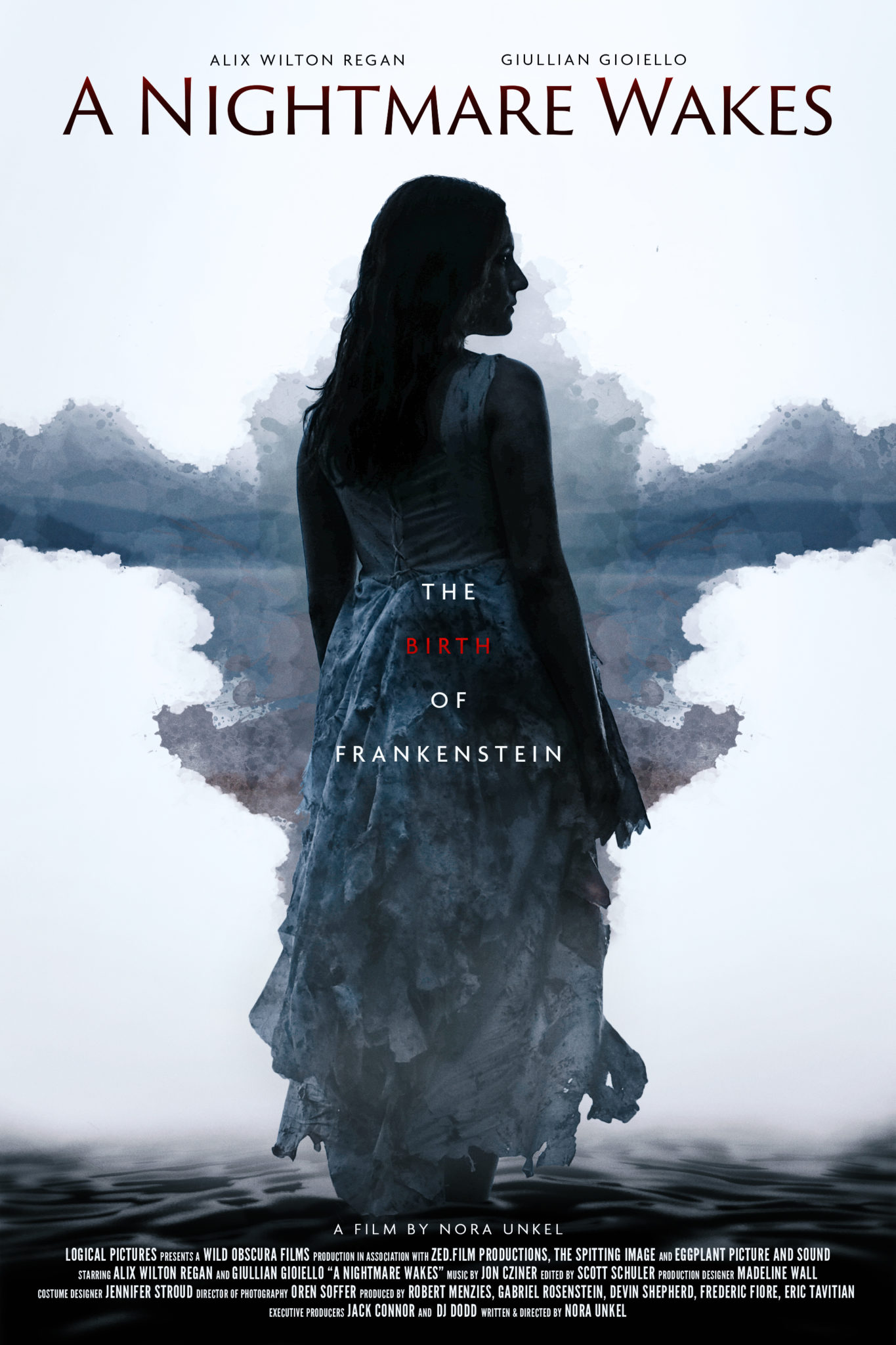 Made in honor of the 170th anniversary of the publication of Frankenstein; Or, The Modern Prometheus, A Nightmare Wakes is a low-budget drama that follows the life of its writer, Mary Shelley, as she deals with the challenges of her young life and the choices that lead up to its publication. Does this light drama manage to find something introspective to say about its subject or does it succumb to cliche?

Disclaimer: Geeks Under Grace received a screener copy of the film prior to its February 4th release date.

I should note going into this that I haven’t gotten around to reading Mary Shelley’s Frankenstein yet. It’s on my list (and a public domain audiobook is free on YouTube) so I will get to it soon. Naturally, I have seen the beloved Universal Pictures film adaptation and its bizarre sequel, The Bride of Frankenstein, but anyone who has read the book will tell you that the film is VERY different (for one: the monster talks in the book…).

I’m mostly going to be approaching this review from the perspective of a biography on its author, Mary Shelley. By itself, that’s a fascinating angle. Shelley is a particularly tragic figure in 19th-century literature. She was raised by the radical feminist/atheist Mary Wollstonecraft and her academic father and married into a horrific family situation. Her husband, Percy Shelley, was an adulterer whose previous wife ended up committing suicide during her pregnancy. Mary and Percy would attempt for children several times and lose all but one of them prematurely.

Death, radicalism, discontentment and loss permeated the young life of Miss Shelley. Much like subsequent horror writers like Lovecraft, the horror and uncertainty of her life poured into her writing. Frankenstein unmistakably bears the discomfort with the human body and a fixation on the nature of death. There is a lot of creative room to develop a story about the nature of artistic creation and the process of channeling trauma into inspiration.

In that regard, Shudder’s newly acquired light drama is a tepid success.
Artistically The Nightmare Wakes is a very similar film to the recent Tolkien biopic. It’s a low-budget Gothic drama with quasi-surrealist imagery and ends just as the author in question begins to work on their greatest literary achievement.

The film documents the young life of Shelley as she struggles with infidelity, abandonment and death after she’s already abandoned her family to marry Percy. As she struggles with the challenges of her life, she experiences flashes of inspiration and horror that foreshadow ideas, characters and themes that would eventually end up in her publishing her novel.

The film is loosely based on true events but departs from historical accuracy several times throughout the story. For one, Percy’s real-life death is changed for the film. In real life, he died in a boating accident. Elements like that are changed for dramatic license. The movie clearly dramatizes historical elements to craft a more clean-cut narrative.

I wouldn’t call The Nightmare Wakes a deeply introspective look into its subject. It’s a great deal more subtle than the thundering moments of stupidity in Tolkien, but the film works better as a light drama than as an origin story about Frankenstein. The drama merely alludes to the psychosexual horror and trauma that marked Shelley’s life without deeply tying into how they connect to the books. At best, the film seems to suggest that the trauma and loneliness that haunted her real-life bled into her opium hallucinations and sparked the inspiration for her novel.

I get the sense the director has spent a great deal of time pouring through literary and feminist scholarship on Frankenstein and its thematic underpinnings but doesn’t quite connect the dots in this script. There is an enormous amount of scholarship on Frankenstein from literary analysts and feminists alike who adore Shelly as one of the most successful female writers in history.

Ellen Moers argues that “the novel is a “birth myth” in which Shelley comes to terms with her guilt for causing her mother’s death as well as for failing as a parent.” Anne K. Mellor, a feminist Shelley scholar, suggests that Frankenstein is a story “about what happens when a man tries to have a baby without a woman … [Frankenstein] is profoundly concerned with natural as opposed to unnatural modes of production and reproduction.” Guillermo Del Toro described the book as the quintessential teenager story: “You don’t belong. You were brought to this world by people that don’t care for you and you are thrown into a world of pain and suffering, and tears and hunger.” Others have even described the novel as a gothic retelling of the themes of Paradise Lost.

There are so many rich veins to potentially tackle in a biography of Mary Shelley. It’s a shame then the movie doesn’t dig deeper. It’s a fairly slow-paced drama punctuated by moments of sadness and blood that doesn’t seem to find the dramatic catharsis in Shelley’s life that writing the book could’ve offered. We merely see that her life is moment after moment of pain and misery and that it gets better after she publishes Frankenstein. It’s a tortured romance story with no romance, and a story resolution that doesn’t grasp the tragedy of the human loss involved.

+ Some introspective themes about the inspiration for Frankenstein
+ Decent performances

A Nightmare Wakes could've captured a complex and introspective look at one of the most important female novelists of all time. Sadly, the film merely alludes to greater themes and gets caught up in the lacking drama of its romance story while its more inspired ideas sit on the backburner.