Retro Review – What Ever Happened to Baby Jane? 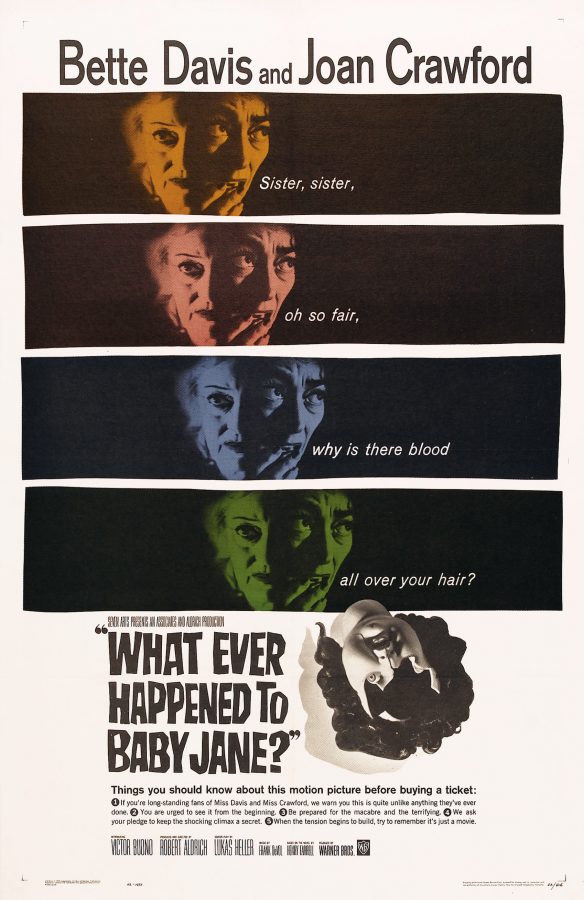 When this film was released, it caused something of a stir that spurred its initial success. Not only was it a sibling rivalry plot the likes of which had never been done before, but it was unique enough to spawn a whole film subgenre, known as the “psycho-biddy” movie. On top of this, the two main stars are Bette Davis and Joan Crawford; two actresses infamous in Hollywood for feuding that reached the point of attempts at physical injury during the making of this movie. With casting like that for a plot centered around jealousy, the production was perhaps bound for greatness – and the viewing experience delivers.

Violence/Scary Images: Like most films of the era, there is little direct violence shown; the victim is usually just outside of the shot. Regardless, the paraplegic Blanche is constantly placed in abusive, threatening, and violent situations; much of the plot is driven by worry for her safety. A murder occurs and there are also a few shots of dead animals.

Language/Crude Humor: Jane makes many threatening remarks towards her sister. There are infrequent swears such as d**n or h**l.

Drug/Alcohol References: Jane’s alcoholism is one of the central parts of the narrative. There is also casual cigarette smoking.

Sexual Content: There is a short reference to an implied one-night stand.

Other Negative Content: The central narrative of the film is how Jane abuses Blanche through isolation, mental anguish, and a belligerent attitude.

Positive Content: One person does stand up for Blanche and does their best to save her.

The movie opens with a child celebrity in the days of vaudeville, the well-loved and supremely spoiled Baby Jane Hudson. Her sister, Blanche, lives in her shadow as their parents focus all their attention on their star daughter who brings in all the money. As the years go by, vaudeville falls out of fashion and Jane’s career is over. In an ironic twist of fate, Blanche becomes a famous Hollywood actress while Jane is all but forgotten in the public eye. This acting career is cut short by a car accident that leaves Blanche in a wheelchair, and many years later the story picks up in the year of 1962 where the main thrust of the film takes place.

Now that the decades have rolled past, we see an almost jarring shock as the scene is cut to Jane in the present day. She takes care of her disabled sister, but everything about her appearance is ghastly. Her face is haggard and drooping, with her makeup completely over-applied and grotesque; her hair is done up with the tight golden curls she had as a child; her dress is far too immature and frilly for her age. She physically looks like the very personification of the hag archetype, and it’s clear that she’s trying to make her appearance look like she did during her child star days.

And thus, we see the central theme of the film: Jane is constantly trapped in the past, fueling her fantasy with alcohol, and traps Blanche with her by constantly bringing up their bygone lives as stars. All of the pent-up and unresolved regret, jealousy, and rage pours out as Jane’s bitterness turns her from deranged to outright controlling and dangerous, abusing Blanche while she desperately tries to grasp at her old life in the spotlight. She’s been living the past years in both dress and state of mind as an adult mockery of her childhood stardom, entrenching her further and further in her delusions, with terrible consequences.

Though falling under the category of a thriller or psychological horror, this movie isn’t exactly a traditional entry in either. The tension and the horror involved aren’t from the overwhelming strength and agility of the villain but rather in the helplessness of the victim, a formula done brilliantly later on in films like Misery (or earlier in The Hitch-Hiker). Though there are some moments of shock, it comes through the terrible situation rather than monsters or jumpscares. This shock is executed skillfully, still providing a good deal of creeping fear in spite of the age of the film and a lack of graphic imagery at the level often seen in modern-day movies. Any singular person could, at any time, step in and turn the entire situation around, but Blanche’s inability to communicate with the outside world about her situation keeps the issue present and brings the viewer to the edge of their seat whenever it seems like she might have a chance to call for help.

One of the highest points of the movie is the acting. Both lead actresses do phenomenal jobs, with Crawford portraying distress that’s almost palpable and Davis playing Baby Jane so well that it borders on disconcerting. Even minor actors who appear for but a scene or two perform their roles in a fitting way, amazed by or shaping the lives of the sisters. If you’ve ever enjoyed watching King Tut in the 1960s Batman TV show, here’s your chance to see the actor (Victor Buono) in his greatest film role!

Aside from the skill of everyone, from the actors to the costume designers to the makeup artists involved in this production, I believe the plot is notable enough to be discussed at length. It sticks fairly close to the book it’s based on, with the main difference being that Blanche comes across as less gullible and frail in the movie. As page-to-screen adaptions go, this is one of the finest out there; all of the things that would normally be difficult to adapt with the limited filmmaking technology of the time (like the many conversations Jane has in her head) are creatively expressed through different means (Jane’s mental regression is instead symbolized through her obsession with the doll made in her likeness).

Behind all of the fear from Blanche’s situation, the intense jealousy of Jane is on full display. The film doesn’t just present her as evil and leave it there, the opening explains how she got this way: her parents, so enamored with money, qualify the worth of both sisters by how much either is in the spotlight. It can be easy to watch this happen on-screen and not stop to question how much we do this ourselves, even as we see the utter destructiveness of this mindset unfold as two old women still cling to this value system years beyond their childhood.

Jane is a fading light clinging to a memory, but in truth, both sisters are isolated. Blanche is physically locked in her room while Jane is locked up in a mental room of her own making, imprisoned by her memories and unable to leave for as long as the door to the reality of the outside world is shut. To portray this on screen while still retaining the thrill is truly skilled filmmaking, and it’s one of the best things that sets this movie apart in its field. There’s also a plot twist near the end that adds even more to the whole situation! But you’ll have to see that for yourself.

The film is a classic and deserves a watch, if not for the great suspense, for the lesson it provides on the destruction that jealousy can produce.