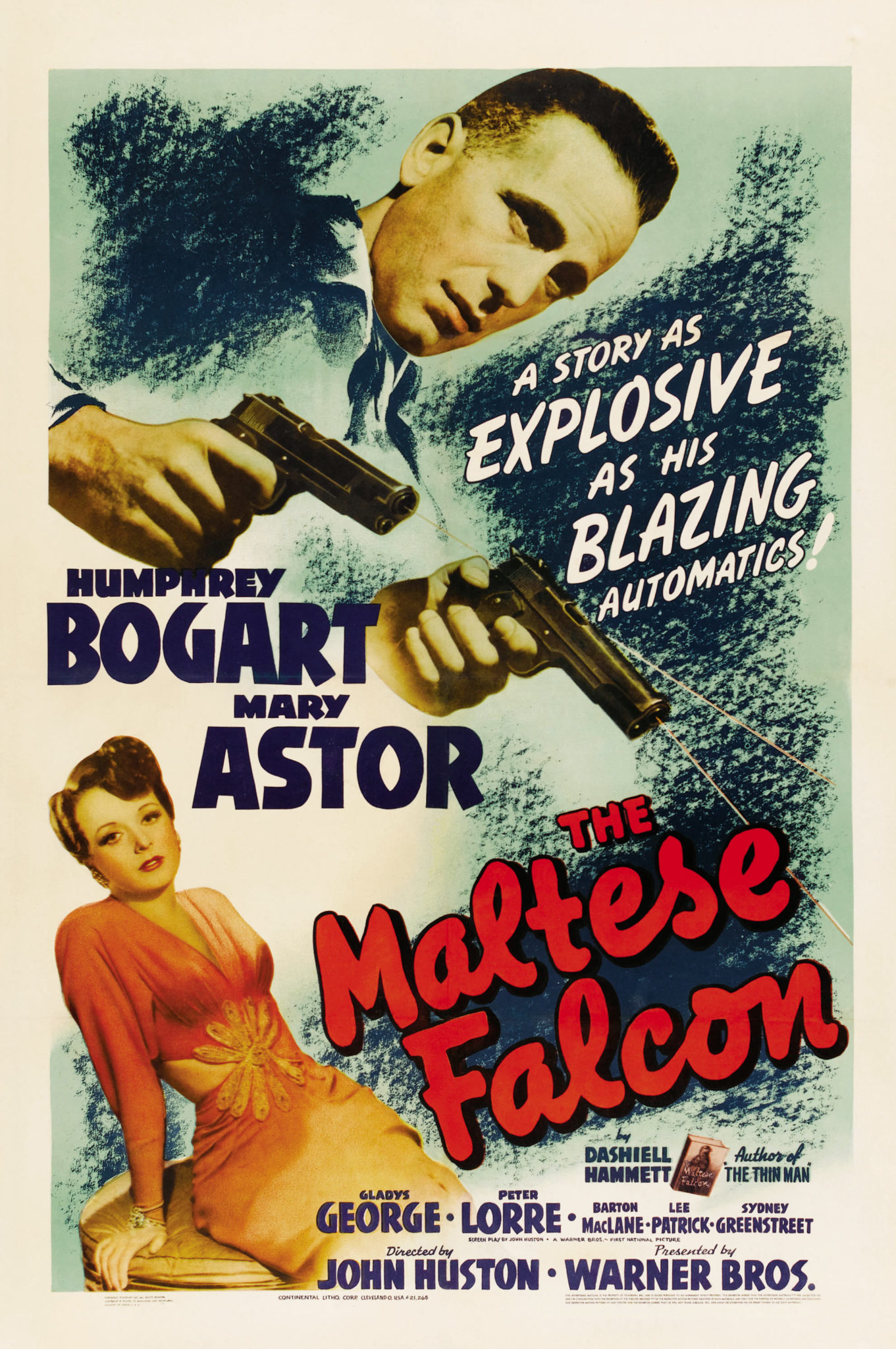 The works of author Dashiell Hammett have worked their way into Hollywood numerous times. Over half a dozen adaptations of his work exist! Naturally, the two most famous and beloved films based on his work are The Thin Man and The Maltese Falcon. The latter, released on October 3rd, 1941, would go on to be regarded as one of the best hard-bitten private eye stories in cinematic history! It would also serve as the jumping off point for one of Hollywood’s most prolific careers.

Violence/Scary Images: Characters are shot and killed. No blood is depicted; there is no graphic violence.
Language/Crude Humor: None.
Drug/Alcohol References: Frequent smoking and drinking. A character is “slipped a mickey.”
Sexual Content: A character is having an implicit extra-marital affair.
Spiritual Content: None.
Other Negative Content: Themes of apathy, greed and disloyalty.
Positive Content: Themes of honor, law and justice.

John Huston’s inaugural film adaptation The Maltese Falcon turns 80 years old this year! As with any old movie, the question arises as to whether it holds up to modern film standards. That can be a tall order. Sensibilities change and people want different things from the film now. I’d previously watched Maltese Falcon once several years ago for a review and didn’t find it that engaging at the time. I enjoyed it but I didn’t find it engrossing. Having grown a great deal as a film viewer, I can say that Maltese Falcon has blossomed for me into one of the greatest thrillers I’ve ever seen. That’s no small feat!

It certainly helps that director John Huston was working from Dashiell Hammett’s critically acclaimed novel. That said, the film stands up completely on its own as a powerhouse of drama, great performances, and visual storytelling. John Huston would quickly go on in his career to become one of the great “tough guys” in Hollywood history. He would direct classic films like The African Queen, The Treasure of the Sierre Madre, Moby Dick and The Man Who Would Be King. Here, Huston delivers on his cold-bloodedness and wit that would go on to define his career.

The Maltese Falcon is a film of immense wit and intelligence. Its script and performances all brim with an attitude and edge that have gone on to inspire entire genres in Hollywood. Whenever a modern filmmaker thinks of the cliche private eye in cinema, they’re thinking of images from this film.

Of course, Huston’s eye for cinema and pitch black dialogue were only some of the ingredients for the film’s success. The film stars the great Humphrey Bogart in the titular role of Sam Spade. Curiously, Bogart was not considered top-rate Hollywood talent at the time the film was made. It was released a year before Casablanca turned him into the household name he became. That said, this film is the Rosetta Stone for his entire career and persona. Everything we later see him accomplish is in his performance as Sam.

His character here makes for a sharp contrast too. Bogart delivers on one of his most despicable characters. Sam Spade is the opposite of the romantic we see in Rick Blaine. He’s not even the smooth Phillip Marlowe we see in The Big Sleep. Spade is a sardonic, self-centered womanizer who is introduced having an affair with his partner’s wife. When one of his cases results in his partner’s death, he pulls double duty as a private eye seeking answers for himself and the honor of his coworker to figure out why he was murdered in cold blood.

That doesn’t mean Spade necessarily mourns his death. Sam is a deeply emotionally distant character who doesn’t seem capable of admitting his feelings outside of practical realities and business deals. It’s possible that he just pursued the mystery out of a loathing for being inconvenienced.

I’m not sure how deeply you want to read malice into this portrayal. Spade isn’t evil. I just wouldn’t go as far as to claim he’s got a heart of gold. Spade is quite the compelling lead though! He’s born with the gift of gab and he has the talent and drive to talk his way out of any situation. Anytime he’s confronted with a gun, Spade either slaps the firearm out of his attacker’s hand or talks his way out of danger. He’s quick to get a word in and it’s an absolute joy to watch him talk circles around every other character in the film. Some of his lines are an absolute laugh riot!

Spade’s story naturally follows the titular “Maltese Falcon” which is explained in the film’s prologue. As we find out, the Falcon was an artifact from the Crusades that was lost to history but is worth a fortune. We follow him unfurling the conspiracy of what the Falcon is and why so many people around him are willing to kill one another for it. Spade’s story doesn’t just end up being a classic “whodunnit” tale. In order to solve the mystery, he personally involves himself in the story and makes himself a primary player in the conspiracy.

Some of the film’s best scenes are Sam and the film’s nominal antagonist talking circles around one another because they’ve both got each another in a bind. Both characters end up having something the other wants and Spade ends up enjoying the experiencing of playing this conspiracy for all it’s worth.

Spade isn’t necessarily playing all of his cards either. By the end of the film, the audience becomes keenly aware the man we’ve seen on screen does have a personal code he lives by. The sardonic personality and graft are partially disguised to help him attain his ultimate goal. Naturally, that doesn’t mean he will turn down a quick buck or a night with a beautiful woman if the time comes. Spade certainly has his moments of reluctant humanity in equal measure with his moments of brutishness.

The Maltese Falcon is a spectacular display for everyone involved with the project. Everything from the acting to the writing and cinematography walks the walk of a team with years of experience in the business of Hollywood.  Despite that, this was Huston’s first film as a writer/director. Here we see the artist arrives fully formed and delivering an incredible piece of artistry and technical proficiency. There is a reason the tropes we see in this film show up in everything from Indiana Jones to Who Framed Roger Rabbit.

- Some dark themes of greed, selfishness and vengeance

The Maltese Falcon is one of the greatest works of fiction to come out of classic Hollywood! John Huston crafted a story of incredible energy, wit and sin that captures the selfish depths of its characters as they conspire with one another to gain incredible riches.