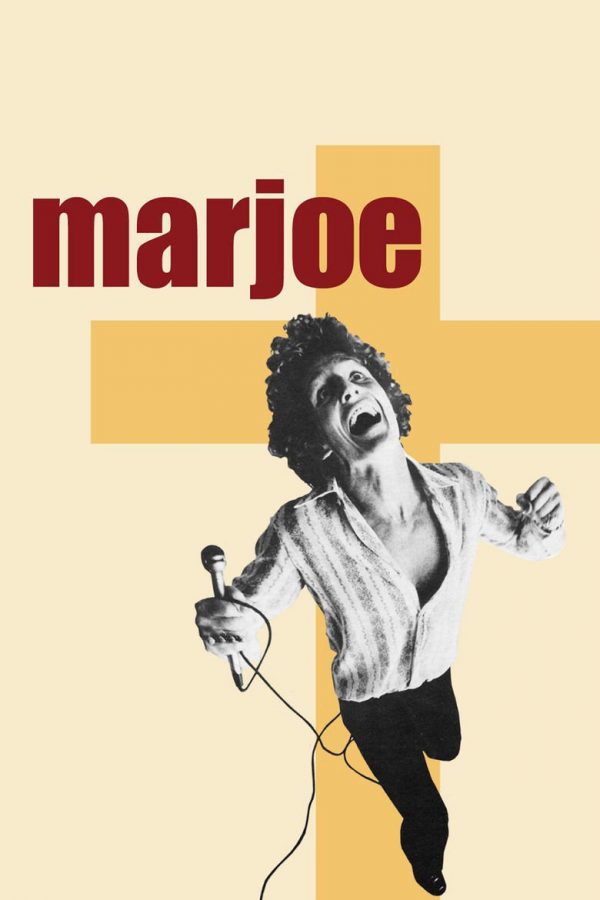 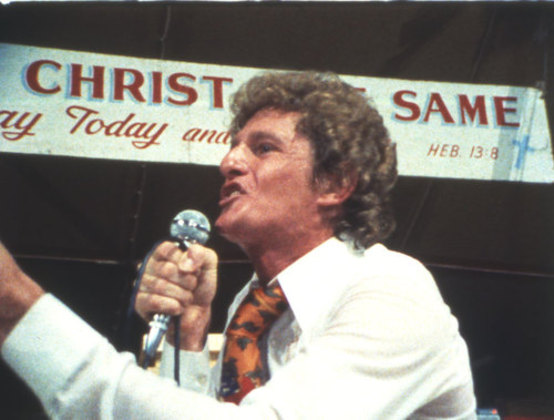 When this documentary was released, it gained the attention of critics, yet the film was extremely limited in its showings. Specifically, the distributor ensured the film would be shown no farther south than Iowa out of fear of upsetting those in the Bible Belt. Why such a cautious move? Read on to find out!

Violence/Scary Images: The impassioned shouting of Marjoe and other preachers in the film may be uncomfortable. Various crowd members occasionally perform actions such as falling to the ground and shaking. There is non-graphic description of child abuse.

Drug/Alcohol References: Some of the film crew and others who Marjoe speaks with are seen smoking. Drugs and smoking are talked about in the preaching.

Sexual Content: Marjoe makes a couple of casual sexual references, such as comparing the excitement of a service to “jerking off”; he also shares a brief kiss with his girlfriend.

Spiritual Content: The whole film is about false Christianity; namely, Marjoe’s manipulation and deception of churchgoers and revival meeting attenders.

Other Negative Content: The primary issue highlighted by the documentary is Marjoe’s deception of hopeful Christians for the purpose of making money.

Positive Content: In spite of the deception, the audiences are moved and it seems that some people came to Christ or had their faith ignited as a result.

Marjoe opens right into the thick of it: no introduction or build up, but clips from the late 1940s of the five-year-old wonder, the world’s youngest ordained minister and evangelist. After the Holy Spirit descended on him during bath time, he became anointed to proclaim the Word of the Lord. He shouts and stomps and praises God, preaching into the camera with all his might. Yes, this is the titular Marjoe Gortner himself, at the height of his childhood career, developing the skill that would later make him millions. The adult Marjoe explains to the filmmakers how he got started and we dive right into his later activities doing the same thing on a grander scale.

Most of the film is in this format – the viewer is presented with long clips of preaching (usually by Marjoe though other preachers do appear) interspersed with Marjoe’s backstage conversations with the film crew. The differences between his stage persona and the reality of his character are apparent as he drops the formality and dramatic poise and coolly explains how everything seen in the clip is a complete sham. This style does get repetitive, but what’s significant is what’s being told.

To understand Marjoe, a bit of introductory background information is useful. Though the film tells you everything you need to know throughout the course of it, the viewer having a basic understanding of the man explains the draw of watching it to begin with. Ostensibly, Marjoe was a gifted charismatic preacher, a man who went across the country emphatically talking about Jesus at revival meetings where the lame would walk and new converts would speak in tongues. Were one to see clips of these revivals, it may even seem encouraging that such emotion and fervor could take place for God.

The reality, however, is that Marjoe Gortner was a conman.

The bathtub epiphany? Complete bunk. The precocious preschooler who could pray with power? Nothing more than a child with a gift for mimicry who took secret cues from his mother in the front row. In truth, the world’s youngest evangelist was forced to memorize these so-called sermons and spent years making money for his parents. Later on after he moved out, he determined that he could use these same skills again and hit the preaching circuit to fill his pockets.

And fill his pockets he did, making enough off empty, gospel-devoid sermons that he could take long vacations to spend the cash on luxuries. The documentary displays crowds lining up to deposit their money into large buckets, all deeply thankful and reverent towards the passionate Marjoe. In truth, he’s done and said very little, but he’s a master of emotional hypnotism.

I’ll leave many of the details of how the preaching was faked, the sham healings, and the excited hallelujahs from the pews for you to see for yourself by watching the film. However, I will mention the scene I found the most notable: a moment where a preacher strolls back and forth on stage, waving the cane of a limping man who has suddenly found the power to walk, all while Marjoe counts an enormous amount of dollars in a backroom.

Other than the occasional cleverly-cut scene such as above, the film doesn’t present much in the way of impressive cinematics. It’s a basic and straightforward documentary in the direct cinema style popular at the time and seen in other contemporary films such as Grey Gardens or Salesmen —the significance lies in the subject matter rather than the presentation. This has its drawbacks, as Marjoe isn’t always a very exciting film. The basic cycle of preaching followed by a short explanation of preaching gimmicks followed by more preaching is essentially all there is. If you come looking for some type of significant progression, you may begin to yawn, but the situation itself—the sheer deception—is captivating.

There’s an important lesson here for Christians to learn from, a warning about empty emotionalism. The audiences shake and shout and speak in tongues, yet all of it is little more than guided hysteria led by a showman who believes none of what he says and has the sole goal of packing his wallet. While this was nothing new to American Christianity at the time, it’s still remarkably easy to find such preachers today, 50 years later, even after all the tricks exposed in this movie. The content of the preaching can be devoid of any significant message, yet fill a building to its brim from the delivery and form.

Marjoe shows us how Christianity can be reduced to a ritual and present a false gospel by replacing true preaching with manipulative performance. This should by no means cause us to doubt our faith or go down a reactionary track of over-intellectualizing God and losing emotional connection to Christ altogether, as if the Bible were only to be studied rather than lived and felt; but Marjoe illustrates the ditch on the other side of the road where we can let an emotional atmosphere blind us into ignorance. We need not just fire and vigor, but caution and understanding.

+ A startling peek into the world of false preaching.
+ Fascinating detail is given as to how the con is done.

- Repetitive in its presentation.

Though there isn't much variation in how the film is structured, this documentary is an exposé worthy of every Christian's time.