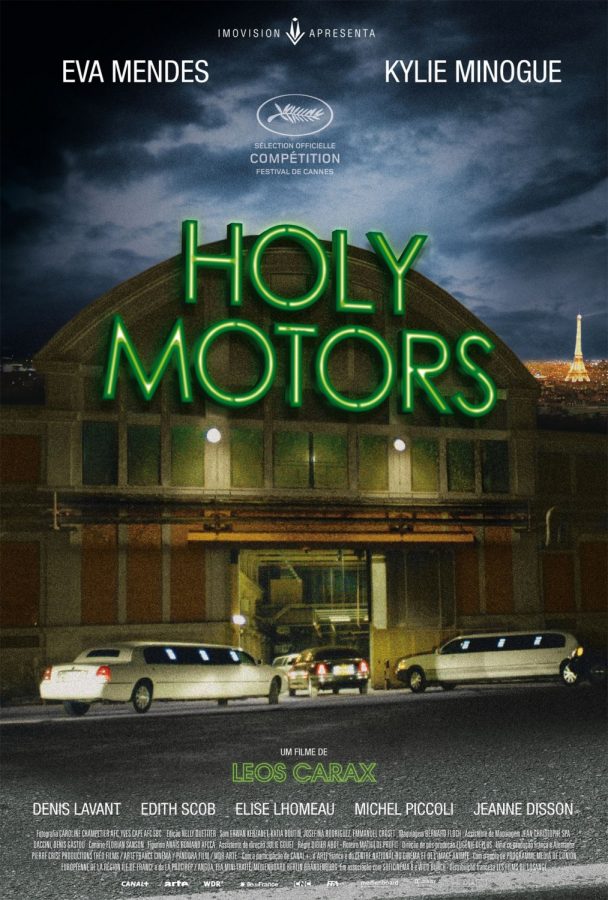 This month marked the return of one of world cinema’s most celebrated and important directors: Leos Carax. He’s certainly not a household name. Most filmgoers haven’t heard of his early films like Boy Meets Girl or The Lovers on the Bridge. He’s not even necessarily a director whom most film students study along the lines of a Jean-Luc Godard or Francois Truffaut, as one does when they’re studying the medium of film for the first time. What makes him notable though is that he directed one of the greatest films of the 2010s with his career-defining masterpiece, Holy Motors.

His first film since 2012 was just released this summer. Annette premiered at the Cannes Film Festival this year before receiving a limited international release and a North American digital release on Amazon Prime. I’ll be discussing my thoughts on that film as soon as I’m able to watch it, but for now I want to discuss the film that made him one of the most notable directors in current world cinema!

Violence/Scary Images: Some intense and bloody images; scenes of stabbing and shooting with blood-spurting out, a woman’s finger is brutally bitten off.
Language/Crude Humor: Some severe language including uses of s*** and f***.
Drug/Alcohol References: Heavy smoking throughout the film as well as alcohol consumption.
Sexual Content: Frequent and graphic depictions of full-frontal male nudity. A female supermodel is shown in a revealing dress. Explicit content not appropriate for sensitive viewers. No sex scenes.
Spiritual Content: Themes of death and grief; no references to God or faith. The Notre Dame Cathedral is visible in the background of a scene of two former lovers reflecting on life prior to a suicide.
Other Negative Content: Depictions of death, sexual abuse, violence, and suicide.
Positive Content: Themes of self-reflection, meaning, art, and comedy.

A man wakes up in a small bedroom. There are two beds and one bed is empty. It’s not stated directly but this man is Leos Carax, the director of the film we’re watching. The empty bed belongs to his wife, who died in 2011 of suicide and to whom the film is dedicated. The man exits his bed and opens a hidden door in the wall using a key. He enters a movie theater to see a crowd of dead people staring at a screen. He looks on the screen and he sees a young girl staring back at him. The actress is Leos’ real-life daughter. She then breaks the line of sight and stares at the male lead of Holy Motors, the movie within the movie that this strange, surreal introduction has just framed.

There’s a lot going on in that opening scene. We’re treated to subtextual reflections on death, estrangement, and art presented surreally and without much hand-holding. In all of these themes, death seems to haunt them. As the actual movie begins, we start experiencing a very strange series of events. A rich man is driven around Paris in a limo to “appointments” where he plays different characters in strange, often violent situations that don’t seem to carry with him once they’re done.

The first two times I watched Holy Motors, I didn’t understand the nature of these appointments and what they signified thematically. The film is very opaque and doesn’t answer questions with simple answers. It’s a story told in scenes and symbols. Even so, the scenes are powerful. I showed Holy Motors to friends who are less cinephilic than myself and the scenes themselves were intense topics of conversation that night. One, in particular, involves the lead character performing a motion-capture performance, performing stunts, and seemingly reenacting an unseen CGI action movie, while the entire scene focuses on the beauty of the actor dancing in a motion-capture suit. It’s an evocative movie even while it’s saying things that don’t necessarily connect with the minds of its viewers.

Still, it took a long time for all the pieces of the film to fit together for me. I didn’t have the life experience or intuition to put two and two together. As the YouTuber Kyle Kalgreen points out though, you can summarize what he’s doing in three words: “He’s an actor. He goes through the appointments of the day, to Paris and its suburbs performing scenes… We fall back into a strange ritual: shed one character, become another, an actor’s life.”

This wasn’t a connection I could make on my own. I don’t have the life experience of being an actor. Still, the clues are all there. Every one of his performances involves returning to a costume room in the back of his limousine where he stares at a mirror and puts on his new characters carefully so that he can perfectly fit into the strange, episodic scenes he’s paid to put on. It’s with this realization that you can start actually grappling with the strange and atonal nature of the scenes. Seeing our main character dressed up as a leprechaun eating flowers in a graveyard while the Godzilla Theme blares at full volume is still every bit as strange but we start seeing how these scenes serve as reflections of some inner torment as they continue.

The scenes embrace the weirdness of each moment while slowly revealing something about our protagonist, Oscar. Each scene slowly reveals a new crack in his persona, be it age, clumsiness, weariness, sexual anxiety, or parental anxiety. Sometimes these details come in the subtle ways that his acting ability comes up short and hurts the scene. At other times, these themes manifest in the content of the scenes themselves as he talks with family members about his inner torments and failures. Yet, these are all acts. At any given time, it’s not entirely clear how much of himself Oscar is putting into these characters. At times though, the wall between cinematic fantasy and reality breaks down and it becomes clear that the scenes are pouring out of his heart.

Even so, Oscar puts away every scene at their conclusion. He may pour his heart out or even die performing a scene but he winds up back in the car at the end of it. In the car, we get scenes reflecting Oscar’s exhaustion and weariness. He’s working himself half to death putting on all these emotionally disparate performances.

As other critics have pointed out, most of these scenes have a double meaning for Leos Carax himself. They’re all homages to projects that he’s worked on and most of the actors in these scenes are people he’s collaborated with in the past. The subtext grows deeper as though he’s working through his history and life and reliving moments. If we think back to the film’s prologue, the weariness starts to make more sense. Holy Motors is a movie about a weary filmmaker being made by a weary filmmaker processing the grief of his wife’s death and reflecting on his life, career, and his art form. Even with four or five rewatches of this film under my belt, I still can’t begin to fathom the full implications of how deep Carax’s satire goes.

To be frank, I can’t tell you just how deeply Holy Motors resolves the fundamental questions of Oscar’s or Carax’s lives. The movie famously ends on two moments of bizarre surrealism that places the answers to these two men’s lives in a metaphorical space where the cathartic resolution these people want and need is portrayed as fanciful. The movie’s comical final shot only seems to reaffirm the anxieties of its characters before putting them to bed and asking them to wake up again in the morning and do the same thing over and over again.

Regardless, Holy Motors isn’t a movie that can simply be fully grasped on a single viewing. It’s is one of the most audacious and ambitious works of art to come out of the 2010s and remains one of the most quietly underappreciated works of high art to come out of cinema in decades. For all of its post-modern surfaces and anxieties, it’s a work of incredible humanity that manages to glue your eyes to the screen the whole time you watch it. Even when you don’t understand it, you’re compelled by it.

Holy Motors is one of the 2010's greatest works of cinema! It's a challenging piece of filmmaking that's hard to digest but becomes more fascinating the more it's studied and rewatched over time.