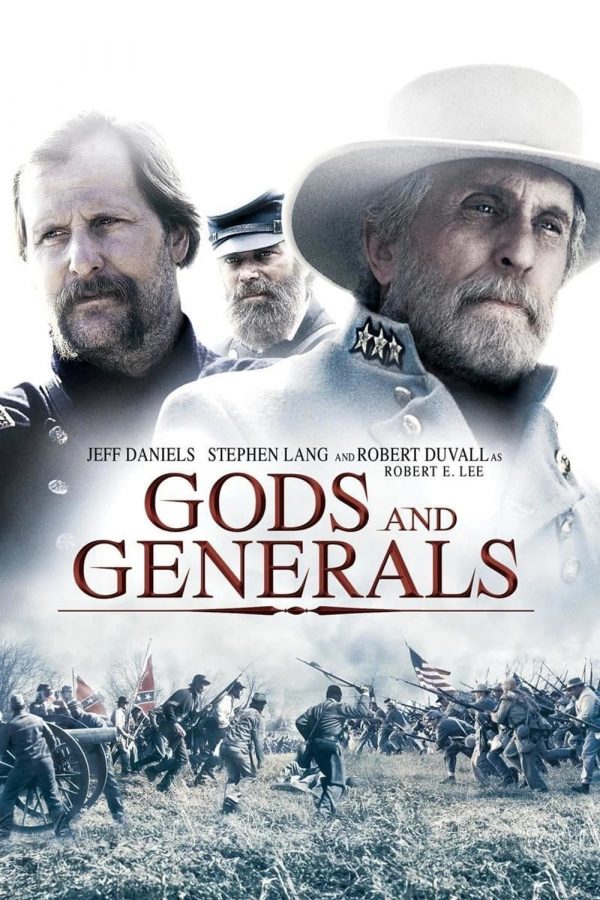 This weekend celebrates America’s Independence Day, which marks 246 years since the signing of the Declaration of Independence on Monday. With that, I wanted to celebrate the yearly tradition of celebrating the history of our nation (usually by blowing up a small part of it) with a double feature. Last year I discussed the somewhat forgotten musical 1776. This year I decided to tackle two of the greatest epic films based on the American Civil War—Gettysburg and Gods and Generals—which both adapt the critically acclaimed novels by Michael Shaara and Jeff Shaara to tell a painstakingly detailed account of the turning point of the bloodiest conflict in American history.

Violence/Scary Images: PG-13 rated war and violence, with characters fighting massive battles, being shot, and some amount of blood and violence depicted. Lots of dead bodies.
Language/Crude Humor: Frequent lesser swearing including d*** and h***.
Sexual Content: None.
Drug/Alcohol Use: Smoking and drinking.
Spiritual Content: Most of the characters are Christian and directly appeal to God for truth and victory.
Other Negative Themes: Themes of war, schism, violence, hatred, and slavery.
Positive Content: Themes of valor, bravery, and fighting for justice.

A little history here that will help when I go into the film in question, but it needs to be understood to understand this film. In 1993, media mogul Ted Turner financed a massive Civil War epic called Gettysburg; an adaption of the Pulitzer Prize-winning novel The Killer Angels. The movie was critically acclaimed upon release. A decade later in 2003, many of the same creatives and actors returned to make another Civil War epic, this time based on the novel Gods and Generals by Michael Shaara’s son Jeff Shaara. Director Ronald Maxwell returned as did many of the original actors, with Turner producing again.

The film would become an absolutely massive project, originally conceived as TNT miniseries but recut as a five-hour theatrically released movie. The cut was initially cut to 4 hours 14 minutes, but a later extended cut returned it to 4 hours 40 minutes, becoming one of the longest mainstream theatrically released films in Hollywood history. The film is split into different segments, or episodes, that cover different time periods of the American Civil war from May 1861 to June 1863. It starts with the debates in Virginia over secession before each chapter explores the battles of Bull Run, Antietam, Fredericksburg, and Chancellorsville.

Any historian will tell you these marked major Confederate victories. Generals Stonewall Jackson and Robert E. Lee were able to put up an extremely potent defensive force against the Union’s incursions into Virginia for the first two years of the war. Despite there only being 90 miles between Washington DC and the southern capital in Richmond, the war dragged on bitterly in this stretch of land, encouraging General Lee to mount an offensive campaign in Pennsylvania in 1863, with hopes of laying siege to the Union Capitol.

Gods and Generals has developed an unfortunate reputation as a Neo-Confederate film. It’s not, strictly speaking. Neither Jeff Shaara, Ronald Maxwell, or Ted Turner are confederate sympathizers to my knowledge or estimation. The film though is designed to depict the historical version of histories that the characters imagined themselves to be. This is a story of war fighting and the characters of history, and the slice of history it chose was that of military men on the winning side of a war where their motivations were (supposedly) based more on loyalty to God and country rather than politics. The Confederates are all depicted as voting for secession over rage that the federal government is building an army to march down into the south and crush the secession movements.

Slavery as an issue is almost totally marginalized because the film is told from the perspective of generals and soldiers on the battlefield. Even then, the film still finds time for a subplot about John Wilkes Booth and his seething confederate sympathies. This perspective also ends up placing General Stonewall Jackson as the nominal protagonist, the clearest point of view character due to his proximity to all of the major events and his motivations being so deeply tied to the (supposed) motivations of the confederate cause.

Stephen Long, who played General Pickett in the first film, plays General Stonewall Jackson here and does an amazing job carrying the film. His portrayal though is too sweeping and romantic, showing the slave-owning southern gentleman as a loyal patriot, a good husband, a beloved leader, and an honorable man. Robert Duval replaces Martin Sheen in the role of Robert E. Lee, but does an equally solid job carrying the (supposed) gravitas and dignity of the man who was once one of America’s leading military minds.

These themes are mostly unintentional of course. By the halfway point of the film, Union characters like Joshua Lawrence Chamberlain start getting introduced and given moments of valor and courage that rival that which we’ve seen from the confederates. The film’s seeming endorsement of confederacy ends up being an accident—a setup for why the army of Northern Virginia would feel so cocky that it thought it could successfully win the war at Gettysburg, to tragic results. It’s all a ruse in the end. This is the story of people who start to believe their own legends and don’t take the obvious warning that comes in Stonewall’s death that they aren’t invincible.

It’s a movie of contradictions. Maybe its best performance comes from a black soldier who voluntarily joined the confederacy, who at one point gives a speech to General Stonewall hoping that God will end the scourge of slavery, to which the confederate (slave-owning) general doesn’t disagree. I’d say there’s a complexity to a character that threads that much of a tightly woven needle but I’m not sure to what end.

As a war movie, Gods and Generals is spectacular. It lacks some of the grit that modern war movies have. There’s no Saving Private Ryan-style shacky-cam or intense gore. The scale though is massive. It lacks some of the intimacy and tension that its predecessor Gettysburg was able to find by shooting on location at the Pennsylvania battlefield. It makes up for that though in scale and breadth, building some of the most beautiful landscapes and matte paintings of 1860 rural America ever visualized. The result is a movie that ends up being impressive even if you can’t stomach its implications.

Turner poured $90 million of his own money into the production and distribution of the film, making it one of the largest independent film productions in history. Even Major American politicians like Sen Robert Byrd, Sen George Allen, Sen Phil Gramm, Rep Dana Rohrabacher and Sen Ed Market got cameos in the film as soldiers and politicians. At one point, Turner had considered financing a third Civil War epic based on Jeff Shaara’s book The Last Full Measure to complete a trilogy. The film’s box office failure with only grossing $12 million saw to it that this wouldn’t come to fruition. Without that capper, the duality of Gods and Generals and Gettysburg exists as a bizarre pairing. The former remains a beautiful anachronism, a Great War film, an accidental (unfortunate) love letter to the confederate lost cause myth.

Gettysburg is a very different beast, but we’ll save that for later this weekend…

- Some unpleasant thematic implications
- Weaker overall narrative than its predecessor

Gods and Generals isn't quite the film its predecessor was but remains an excellent and expansive companion to its brother, and well worth seeking out for history buffs!