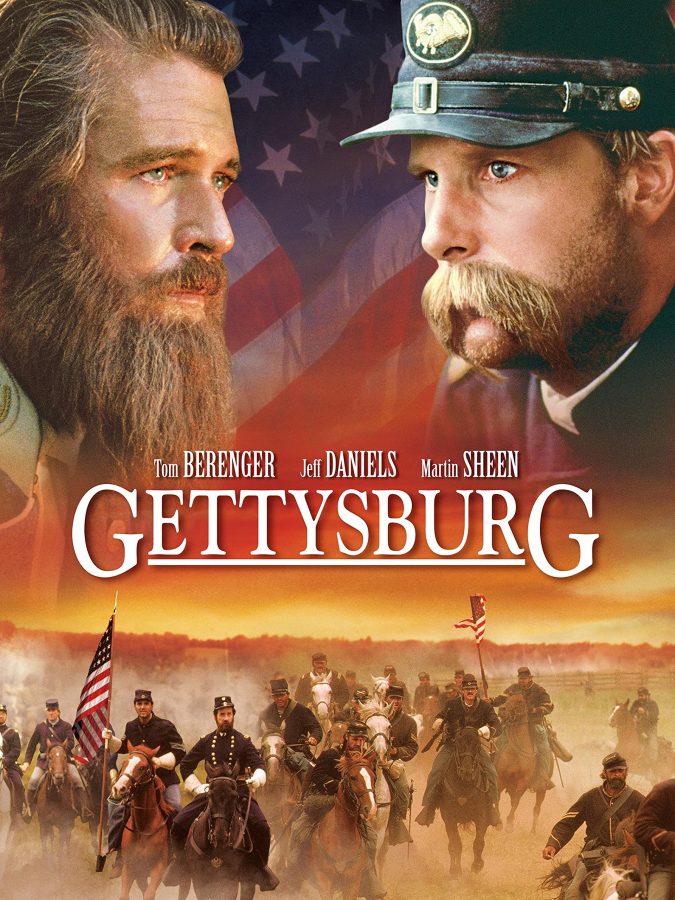 This weekend celebrates America’s Independence Day, which marks 246 years since the signing of the Declaration of Independence on Monday. With that, I wanted to celebrate the yearly tradition of celebrating the history of our nation (usually by blowing up a small part of it) with a double feature. Last year I discussed the somewhat forgotten musical 1776. This year I decided to tackle two of the greatest epic films based on the American Civil War—Gettysburg and Gods and Generals—which both adapt the critically acclaimed novels by Michael Shaara and Jeff Shaara to tell a painstakingly detailed account of the turning point of the bloodiest conflict in American history.

Violence/Scary Images: PG-rated war and violence, with characters fighting massive battles, being shot, and some amount of blood and violence depicted. Lots of dead bodies.
Language/Crude Humor: Frequent lesser swearing including b****, d*** and h***.
Sexual Content: None.
Drug/Alcohol Use: Some smoking depicted.
Spiritual Content: Most of the characters are Christian and directly appeal to God for truth and victory.
Other Negative Themes: Themes of war, schism, violence, hatred, and slavery.
Positive Content: Themes of valor, bravery, and fighting for justice.

It is a historical curiosity that July 4th marks two of the most important days in American history. The first is that it marks the date of the signing of the Declaration of Independence, or at the very least the day that it was published by the continental congress as the signing technically happened on July 2, 1776. The same day though would become important 87 years later when it would mark the turning point of the Civil War.

From July 1 to July 4 of 1863, the Union and Confederate armies clashed on the fields of Gettysburg, Pennsylvania. The Army of Northern Virginia had begun an active incursion into the northern states in an effort to threaten Washington DC and bring a decisive end to the war. The two armies, more than 175,000 men total, met face to face at a crossroads town, and initial confederate success chased Union forces onto the high ground ridge south of town where they were able to thoroughly defend themselves against repeated Confederate attacks, followed by the decisive failure of Pickett’s Charge.

The Union won. On July 4th, the broken Army of Northern Virginia began a long retreat south — marking the last major Southern incursion into the north and the turning point of the Civil War. The total casualties were more than 53,000 men on both sides, making the hills of Gettysburg, Pennsylvania the most bloodstained and hallowed grounds on American soil, the largest battle ever fought in North America. Within two years, General Lee would surrender to General Grant at Appomattox.

This battle was captured beautifully and with some of the best writing of the 20th century by the author Michael Shaara in his 1974 novelization The Killer Angels. The book has since become regarded as one of the greatest works of literature of the past century and was awarded the Pulitzer Prize for literature. Sadly, it was not a success. It did not sell well and Shaara died before reprints of the book started gaining popularity. It’s since become one of the most popular books of the past three decades.

Among its few fans though was mega mogul Ted Turner, who loved the book so much that he helped finance an adaption of the film after being approached by director Ronald Maxwell with a 400-page script he’d attempted to shop around Hollywood to little success. What came of it was one of the largest and most ambitious film productions since the golden age of Hollywood.

For the first time, the National Park Service actually gave the filmmakers permission to shoot the film on the real preserved battlefields in Gettysburg, Pennsylvania, adding an incredible authenticity to the film in scenes like the siege of Seminary Ridge, the attack on Little around Top and Pickett’s Charge to see soldiers walking the actual paths of real soldiers.

Thousands of Civil War reenactors volunteered as unpaid extras to fill out the massive armies depicted on screen. There’s a very real weight to the images we see on screen, even though the violence is tame by modern standards. The film was released half a decade before Saving Private Ryan and The Thin Red Line revolutionized the depiction of war in film, so it ends up having more of the tone of an older war movie than a modern one.

The heart of the film comes down to the genius of Michael Shaara’s book, a masterpiece that honesty deserves its own Classic Review for its influence and beloved prose. It provides so many perspectives on this historical event, from the egotistical strategies of the confederate soldiers who didn’t seize strategic opportunities that would’ve decisively won the war, to the pressure placed on the Union forces by President Lincoln to break the enemy army at all costs. The film’s massive runtime brings dozens of minor perspectives into the film, allowing us to hear rumination from soldiers on both sides, slaves, generals, and even an English journalist who managed to talk his way onto the battlefield.

Martin Sheen, Sam Elliott, Stephen Lang, Tom Berenger, and Kevin Conway turn in career-best work in their depictions as officers on both sides. Sheen captures the charisma and delusional nativity of Robert E. Lee, who genuinely believed he was invincible as a general at this point in the war and ignored obvious warnings from his men that things were in danger. The rest deliver performances with gravitas, reading some of the most beautifully grizzled and historically accurate dialogue ever put to film.

The best-in-show though belongs to Jeff Daniel as Joshua Lawrence Chamberlain, one of the greatest heroes of the Civil War whose incredible and unprecedented defense at Little Round Top has gone down in history as one of the bravest moments in American History. Daniels plays the man with honor and dignity, bringing to life one of the most literate, intelligent, and virtuous men ever to serve the American armed forces.

Gettysburg is a film known for its accuracy and love for history. As a war epic, it’s been somewhat outclassed and outgrown by the film industry around it which has become more interested in violence and horrific imagery in modern war films—reflections of the horror of war and the horrors of the men who start them. It’s a massive film from an older filmmaking paradigm, more similar in size and scale to the likes of John Wayne films like The Alamo or The Longest Day. It is nonetheless an impressive, nearly five-hour war epic that lives and breathes the battle and speaks through some of the best prose ever dedicated to the medium. It is a testament to the real place and people that fought and died, and bloody agony among the hallowed grounds of Gettysburg, Pennsylvania—who in the words of the Battle Hymn of the Republic, died to make men free as Christ died to make men holy.

It’s just a shame the beards are really goofy looking…

Gettysburg remains one of the largest and most impressive war films of the 20th century. While it can be somewhat stilted and flat from a filmmaking level, it is nonetheless a massive and expansive work of historical cinema!