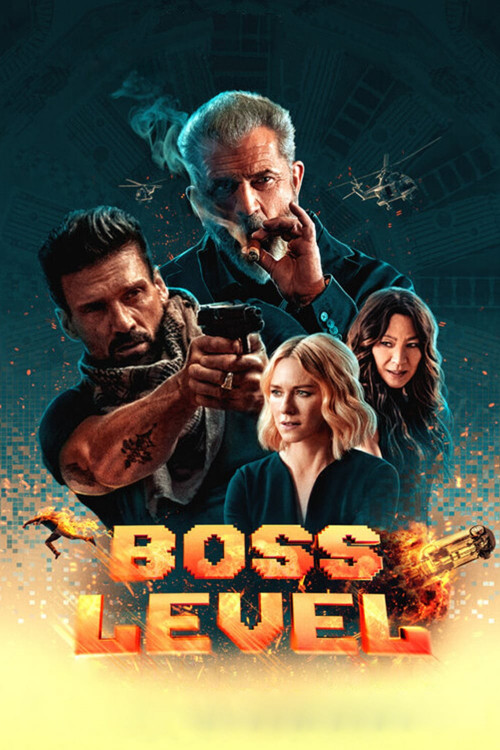 A character finds him or herself reliving the same day over and over again. It did not begin with 1993’s Groundhog Day, but certainly the Bill Murray vehicle is the most famous and well-known example of this. And still, arguably, the best.

The first occurrence that I could find, according to the internet, was a short story from 1941 by Malcolm Jameson, “Double and Redoubled,” where a person is accidentally cursed to repeat a perfect day. In the ‘70s, Japan brought us the novel The Girl Who Leapt Through Time, and this adaptation is the first on record to make TV and film.

In recent years, Bill Murray may have been the first to apply this to the comedy genre, and since then, it’s crossed into others like horror (Happy Death Day), science fiction (Edge of Tomorrow), young adult (The Map of Tiny Perfect Things), romantic comedies (Palm Springs), and now action.

Violence/Scary Images: Violence and gore abound in this movie. Lots of decapitation and blood, often played for humor.
Language/Crude Humor: There is probably more foul language and innuendo than normal words.
Drug/Alcohol References: Alcohol is prevalent. Several scenes take place in a bar, and the main character willingly drinks ridiculous amounts of alcohol.
Sexual Content: Loose. There is a seduction scene with kissing, but sex is absent, no nudity. Women walk around in tight clothes. One scene shows the main character in his underwear with his hand down his pants as he checks his body for tracking devices; this is not a sexual scene but is implied for laughs when someone walks in on him.
Spiritual Content: Philosophical questions abound — See discussion below.
Other Negative Content: The main character begins the story as a bad father, a failed husband, and a womanizer.
Positive Content: Redemptive themes and restored relationships.

I’ve long been a fan of director Joe Carnahan. When it comes to solid action films, few other directors compare to movies like Smoking Aces and The A-Team. At least in my book.

He re-teams here with the classically underrated Frank Grillo, whose biggest claims to fame are the Purge movies and his turn as Crossbones in the MCU. Also starring are Naomi Watts and Mel Gibson.

Grillo plays Roy Pulver, an ex-special ops officer who becomes stuck repeating the same day over and over again. He does not wake, however, to the classic Sonny and Cher song on his alarm clock, but by an assassin trying to cleave his skull in two, followed quickly by a helicopter spraying bullets in rapid succession. If your youth was anything like mine, you know it’s not a fun way to wake up.

The gaggle of assassins after him are an eclectic and diverse gathering, not unlike the cast assembled in Carnahan’s Aces movie; a team of women wielding Hitler’s personal handgun, a pair of muscle-bound brothers, a samurai “goddess,” a hillbilly with a speargun, a doppelgänger of Grillo’s character, and an explosive-happy dwarf nicknamed Ka-Boom.

The story is darkly comedic, styled similarly to Zombieland with the narration, flashbacks and comedic deaths. But it also carries a lot of heart. As the story goes on, despite the ample amounts of gore and enough f-bombs to destroy a small fleet, the viewer begins to see the core of the story is a father/son relationship. It’s a touching moment about halfway through when Grillo’s character realizes there’s more at stake here than just what he thought and begins to use his many lives in a more fulfilling way. Sure, the action takes a nose-dive here, but the film is ultimately better served for it and the character of Roy becomes a far more likeable and relatable protagonist than just the military butt-kicker that we had accepted him as prior.

For the most part, the movie had me grinning ear-to-ear throughout its runtime. So, what’s the catch? Language, as I mentioned before. Gore also abounds. In fact, this movie may win the prize for “Most Heads Severed in a Single Movie.” I think that’s a category at the MTV Movie Awards…? And I do have a slight issue with the loosely-applied video game aesthetic that is wielded liberally to the many repeated deaths Grillo suffers, as though they were lives in a game. Even the title is game-inspired, but the only game reference in the story at all is the fact that Grillo’s son skips school to go to a vintage arcade tournament featuring classics like Galaga and Street Fighter, but that’s only loosely relevant.

The problem I have with nearly all modern action movies is the John Wick of it all. The action in that series is so honed and refined that every movie to follow it fails to clear the bar by an embarrassing margin. Mostly. If Wick sent a challenge into the universe, Carnahan and Grillo answered in kind. It’s not 100% on par, but it comes closer than most, and will leave a satisfying taste in your mouth if the Wick brand is what you’re craving.

I mentioned before that these types of movies have become a bit more common. When watching movies like this, I tend to think of Murray’s line from Groundhog Day, where he quips, “Maybe God isn’t omnipotent. Maybe he’s just been around so long, he knows everything.” When we are made in the image of God, it isn’t off-kilter to compare ourselves to Him. But the danger lies in believing He is anything other than what He is. Or worse, that we can be anything like Him apart from His grace.

Which leads me to something most casual viewers probably won’t like: the ambiguous ending. I can’t say too much – partly because it may venture into spoiler territory, and also partly because I don’t fully understand it myself. There is a moment… a notion… that Grillo’s character Roy has transcended. Perhaps not to godhood, but… well, you tell me.

In writing this, I’ve thought a lot about the Time Loop subgenre, mostly about it’s appeal. Why is it trending? I perceive a spiritual reason for that.

It’s that God-shaped hole that was molded into each of us at our creation. We long to fill it with things that aren’t God. When we don’t know God, we subconsciously reach for him. We see this in multiple places.

Years ago, Twilight was all the rage. And it wasn’t a good story. But you had an audience that was seeking Jesus, our First Love, and trying to find him in Edward. An immortal love that will never die, that is drawn to us despite how unworthy we feel, who will always love us despite the dirty, hairy other thing that fights for our affection (a metaphor for the secular world seen here as Jacob the werewolf) and ends up madly in love with our children… It’s not a perfect analogy, but you get the point. And let’s not forget the parallel with vampires and their need for a redeeming blood to keep them alive, to give them a death and rebirth.

We see this also with the popularity of superhero movies. In the book of John, Jesus tells his disciples, “These things and greater will you do in my name…” (I’m paraphrasing). This from the dude who healed the blind, raised the dead, and fed massive crowds with what a kid carried in his lunchbox. There is a yearning inside of us to do super-human feats that defy logic because our Creator and Love gave us that edict. And as we look around the room, we find a lack of that happening. So we answer in fiction. And these become our heroes because so many have forgotten our First Love.

And so the trend continues in the Time Loop. We are made to live forever. It’s just a Biblical fact. And we are aware that death is imminent. Couple that with the concept some have of purgatory and having the chance to perfect what we got wrong before crossing over into paradise. Perhaps you see the appeal to this kind of story.

Not to mention the redemption of a father/son bond being repaired and healed because of a father’s sacrifice, despite a sin-torn world that would tear it apart.

It's been a long time since I've enjoyed a movie this much. Sure, it was pure Hollywood escapism and it's a sci-fi trope that's becoming far too common, but it's performed with style and flair and at least feels original.

An author who spends the bulk of his time creating new worlds to play in and characters to talk to and tell their stories, Joey Ruff is also an avid fan of most pop culture media, from the MCU to Legos to video gaming with his kids. He also passes the time throwing a ball for a couple fiesty labs and enjoys home improvement projects, baking, and spending time with his wife.