Most people love a good mystery because we are curious by nature. I grew up reading mystery books where the detective would survey the crime scene, interview the witnesses, and finally make his or her accusation of the criminal. Almost all the great detectives used their five senses to investigate the crime, but what if you could only use your hearing? How well do you think that you could pick up on what people say, or how people talk during the events leading up to a crime? Unheard by Next Studios presents us with a detective game where the only evidence the player has access to is audio recordings. The game asks the player to piece together the events leading up to a crime in order to solve it. Unheard is a masterful game that will have the player questioning everything they hear.

Unheard is about listening to characters speak to each other. There’s no visuals other than a map of the location where the investigation in taking place. Players will hear curse words such as the “F” word and the “S” word, and they will hear the sounds of violence when a character knocks out another character. The characters will also talk about adult themes like murder, blackmail, and drugs. I would recommend this game to older teens and adults. 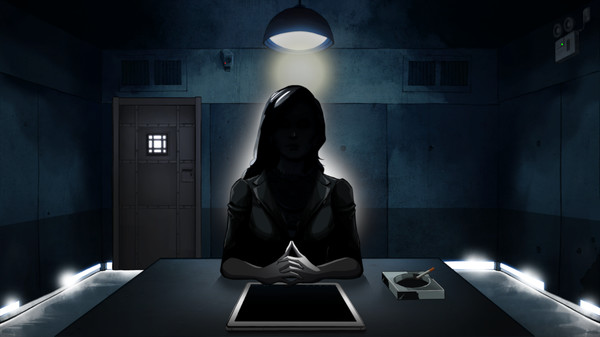 The player interacting with the Acoustic Detection System.

Have you ever been sitting in a restaurant and you wanted to know what the couple across the room was talking about, or maybe you have been at work and some co-workers are talking quietly while looking your way?Don’t you want to know what their saying? Unheard allows you to be a fly on the wall, overhearing conversations. There’s a catch, though, because this time you’re a detective who needs to piece together many different conversations in order to solve a mystery. That’s the hook that pulled me into the game when I first saw the trailer. 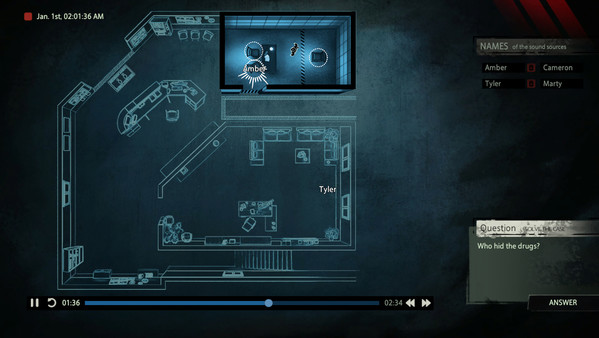 Over hearing an interrogation.

Learning the simple interface for the game takes no time at all. Each mystery takes place in a small building with several rooms, the view being from above. A small dark figure represents the player while the characters are represented by dotted circles. The characters don’t respond to the players presence because you’re listening to recordings. There’s a list of names of the characters in the scenario of which the player must match up to each of the dotted circles. The player can move from room to room as they please while they listen to the sounds of the event. A time track control along the bottom of the screen allows the player to fast forward and rewind the event in order to hear everything. In the end, the player must answer one or two questions to solve the mystery. These answers require understanding the whole event, because characters often have complex stories. 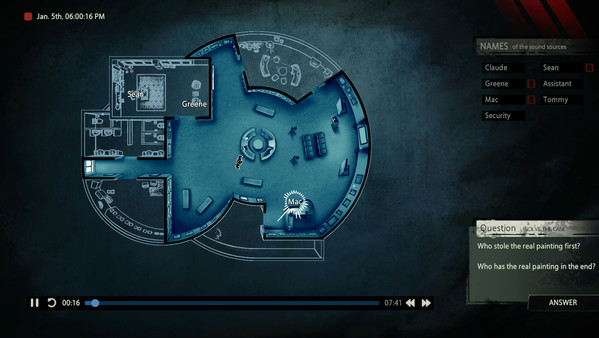 Unheard amazed and engrossed me the whole time I was playing the game. I spent at least an hour on each mystery, following characters around listening to them. The most helpful thing to do at the beginning was to label each of the characters. Figuring out someone’s identity just by listening to them talk took a lot of time. Sometimes, a character would identify themselves to other characters, but other times, I could only figure out the identity of characters after following others around the map. Someone might talk to an unlabeled person, then, in another conversation a few minutes later, casually throw out the unlabeled characters name. 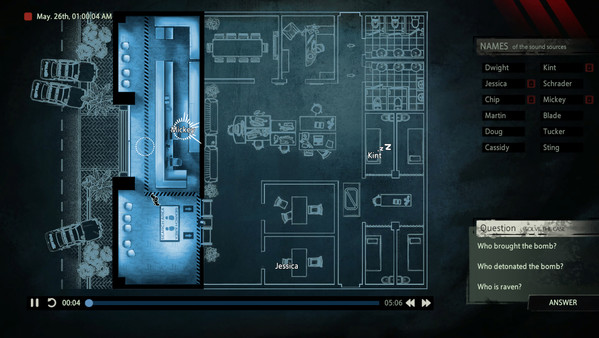 Investigation in a police station

Once I had labeled all the characters, then I could start to construct the event. A helpful feature the game provides is a note taking system. Each note can only be about ten words long, and the notes can be time stamped in the event. I found this system very helpful, especially in keeping track of specific character actions in the event. I could be standing in one room listening to two characters talk when a note appears that lets me know what other characters are doing in another room. Once the characters have been labeled, you can see them move around the building, but the player still won’t be able to hear anything they say or do.

Unheard relies heavily on the voice acting of characters to convey the emotions and intent of each character. The acting is adequate, but don’t expect award-winning acting. I never felt like the voice acting was taking me away from the story. I appreciated that the developer took time to craft the dialogue of each character, giving them a part in the story. As I moved on to other mysteries, I also found that characters would pop up again in another mystery later on in the game. 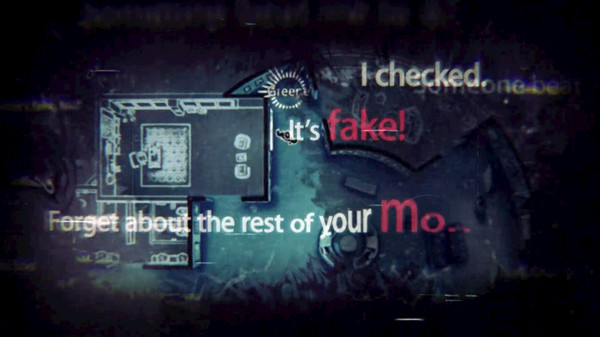 Graphically, the game layout is simple, but very effective. The dark figure that represents the player moves smoothly through the rooms. When I moved rooms I noticed that the sound could be heard three-dimensionally. Depending on where I stood in the room, I could hear the sound coming from different directions. Unheard encourages the player to play with headphones, which I also recommend.

I found that my only complaint for Unheard was the length of the game. It took me about four hours to beat the game. The replayability of the game is low because there’s only one solution to the various mysteries. There are alternate endings, but that’s only for the last mystery. I enjoyed the storyline of the whole game, and I hope that there might be a sequel or DLC with new stories.

Unheard is a fantastic game that gamers should try out. Using dialogue alone as the medium by which to tell a story was great. The mysteries were challenging and really engaged me. At only $6.99, Unheard should be in every gamer’s library.