It’s safe to say, I have faith in Nicalis as a publisher. I feel like I can look at any game they release and know that it has potential. With their latest release, Tiny Barbarian DX, developer StarQuail has created a beautiful hand-crafted pixel art adventure full of neat chip tunes and fun dynamic play styles. Before you even get to the title screen, you are prompted to take on an endless horde of orcs on top of a plateau until the Barbarian perishes, and it’s this loving homage that sets the stage for the adventure to come.

Violence: Since you play as a barbarian, there is a generous amount of action violence, though there is only occasional use of blood on some walls or when slashing some enemies. There is no gore.

Other negative themes: Some warlocks seem to use occult spells to try and defeat the hero. Also, the lady you are trying to rescue appears to wear a bikini, though the graphical style does not pronounce certain features. 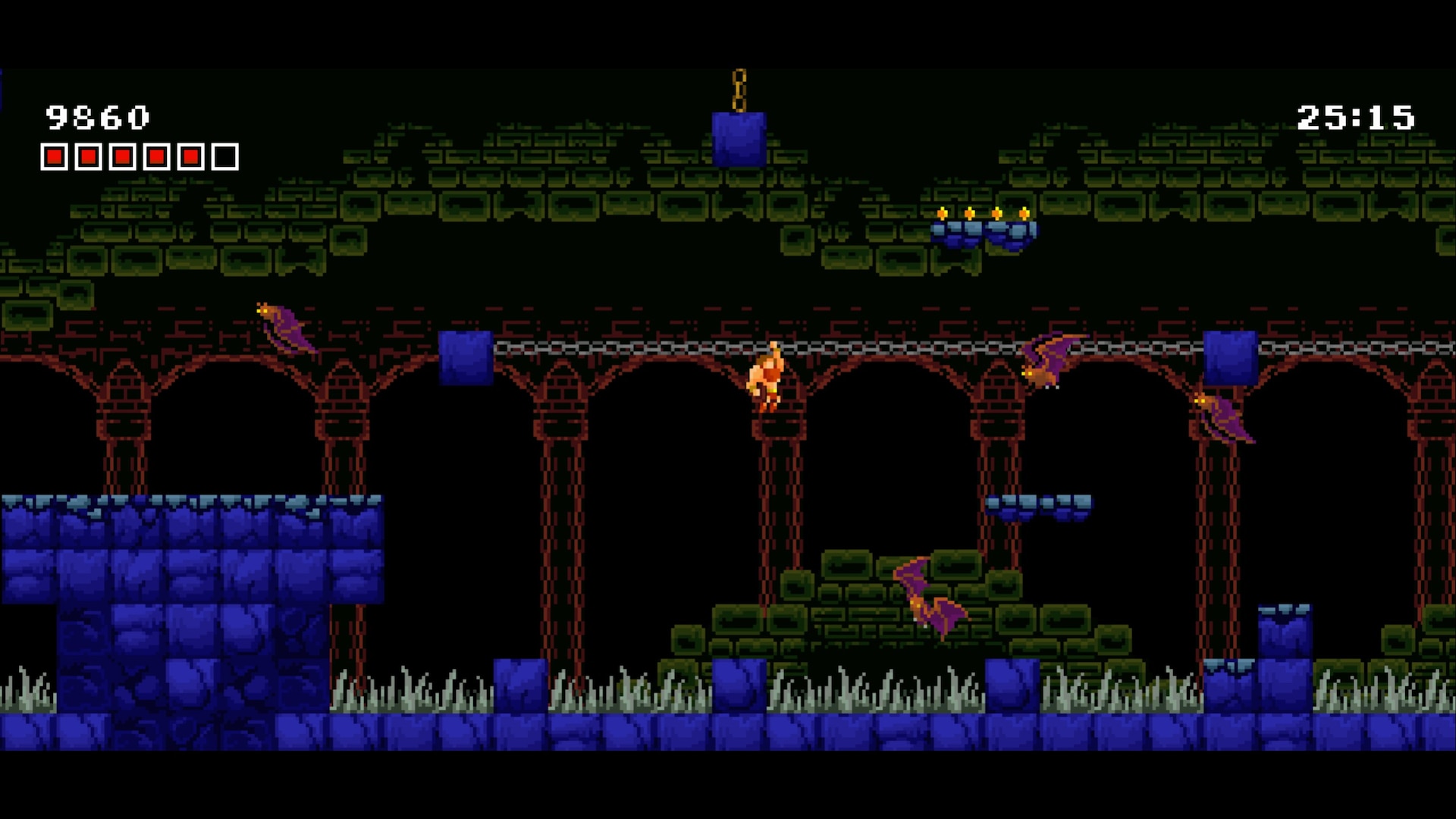 Tiny Barbarian DX is split into four completely separate episodes about the little barbarian himself. They are designed so that each episode could be completed in one sitting in a way similar to most classic Nintendo games, so having these short stories really gives the impression of having accomplished something. You shouldn’t expect to be gripped by the story, as most are somewhat generic: for example, rescuing a damsel in distress from a serpent lord or rescuing the same damsel from a group of apes in the jungle.

The gameplay is pretty bare-bones, but addictive. You can swing your sword and do a jumping elbow slam in to the ground to defeat enemies, jump onto ledges and vines, and that is pretty much it. My biggest gripe with all this is that it doesn’t require anything inventive. Slashing through guards, snakes, and apes feels good enough, but not unique. You can also flex the barbarian’s biceps to use as a counter for enemy attacks, showing off just one of the more humorous aspects of the game. 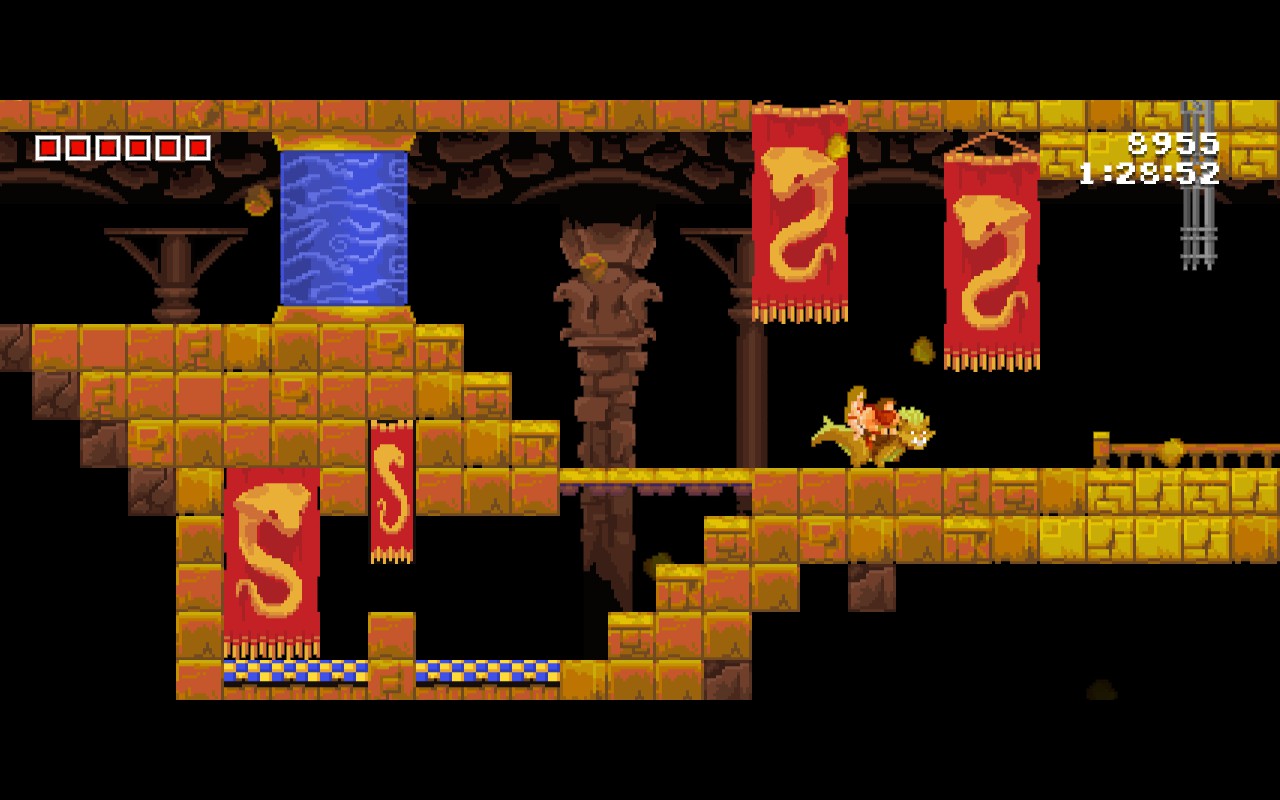 When I look at some of my favorite platforming titles of all time, there is almost always that one defining aspect. This could be its brutal difficulty, level design, or power-ups you obtain. There is really nothing that makes Tiny Barbarian DX special when it comes to gameplay and this is somewhat disappointing. Unfortunately, this is amplified further when paired with the level design. While it’s not designed poorly by any means, almost every single level is structured for the player to go to the right, defeat enemies, evade traps, and defeat the boss at the end. The level design overall feels uninspired and it shows.

There are moments in Tiny Barbarian DX that will take you by surprise, such as the first time you mount a creature, but these moments are few and far between. I can see that the developer was going for a more challenging angle, and I’m sure for many players that will be just fine, but in my experience there were just far too many checkpoints which took away all the penalty for death aside from being taken back just a tiny bit. It’s enough to make death punishing, but not enough to be overly frustrating.

On a positive note, I think the boss battles are done exceptionally well. There’s a good bit of variety in how each boss attacks and is defeated, and some even give homages to classic Nintendo games. These were definitely the highlights of Tiny Barbarian DX, although it would have been nice to have more of them and even feature some mini-bosses as well. If the battles become too hard, you can also play in co-op mode with a friend—it doesn’t alter the core gameplay experience in any way, but it’s fun to slay foes with a friend by your side. 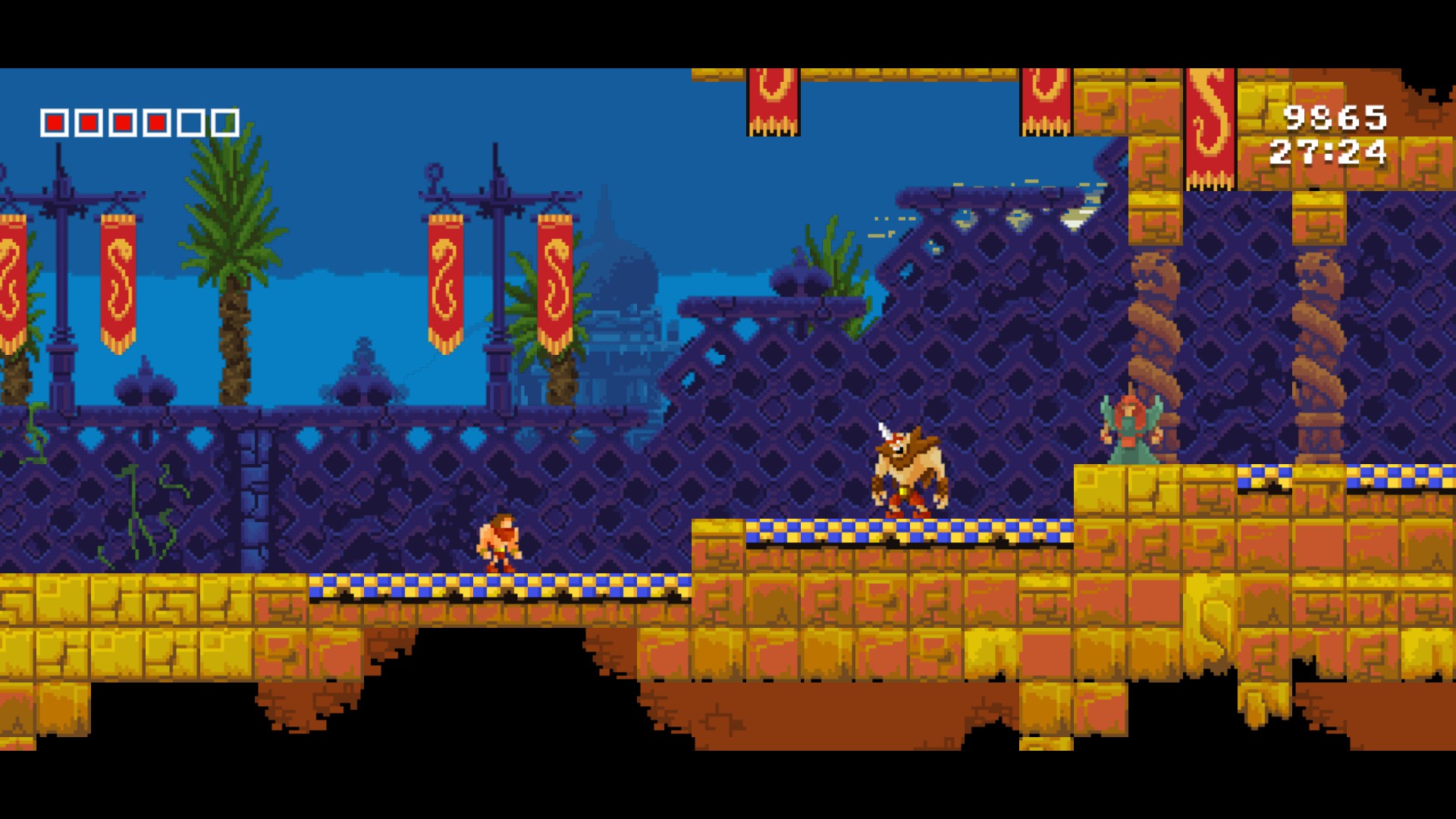 Visually, while the pixel art is beautifully crafted, it could have used some more inspiration. The title goes for a certain graphical style and succeeds with it, but I think the character sprites in particular should have had more detail so that they would have popped off the screen a bit more. The music is also wonderfully created and right from the start, you are thrown front-and-center with this super fast-paced soundtrack that really gets you pumped up. Every track is exceptionally well done for the action on-screen, and they envelop you into the world.

Overall, Tiny Barbarian DX is a good title that could have been a great one if it was more inventive and experimental with its presentation. There’s a decent amount of content here and while the price for the four rather expansive episodes may be a little too high, the title is still enjoyable nonetheless. While most of the gameplay and presentation is generic in nature, the gorgeous pixel art, great soundtrack, and generous yet increased difficulty make Tiny Barbarian DX a worthy title to invest in.