Game developer ACE Team, best known for their quirky strategy series Rock of Ages, is back with their latest project: the equally quirky action-adventure title The Eternal Cylinder. Here you play as a Trebhum, a small ball-shaped alien with stubby legs, a trunk, and a Kirby-esque ability to inhale items and use them to transform and gain new abilities. Your goal is to escape destruction from the Cylinder, a massive metal…well, cylinder, that stretches in each direction as far as the eye can see and crushes everything in its path. By finding new Trebhum friends and leveraging the capabilities of the myriad mutations at your disposal, you may just have a chance to unravel the mystery of the Cylinder and save both your species and your planet. 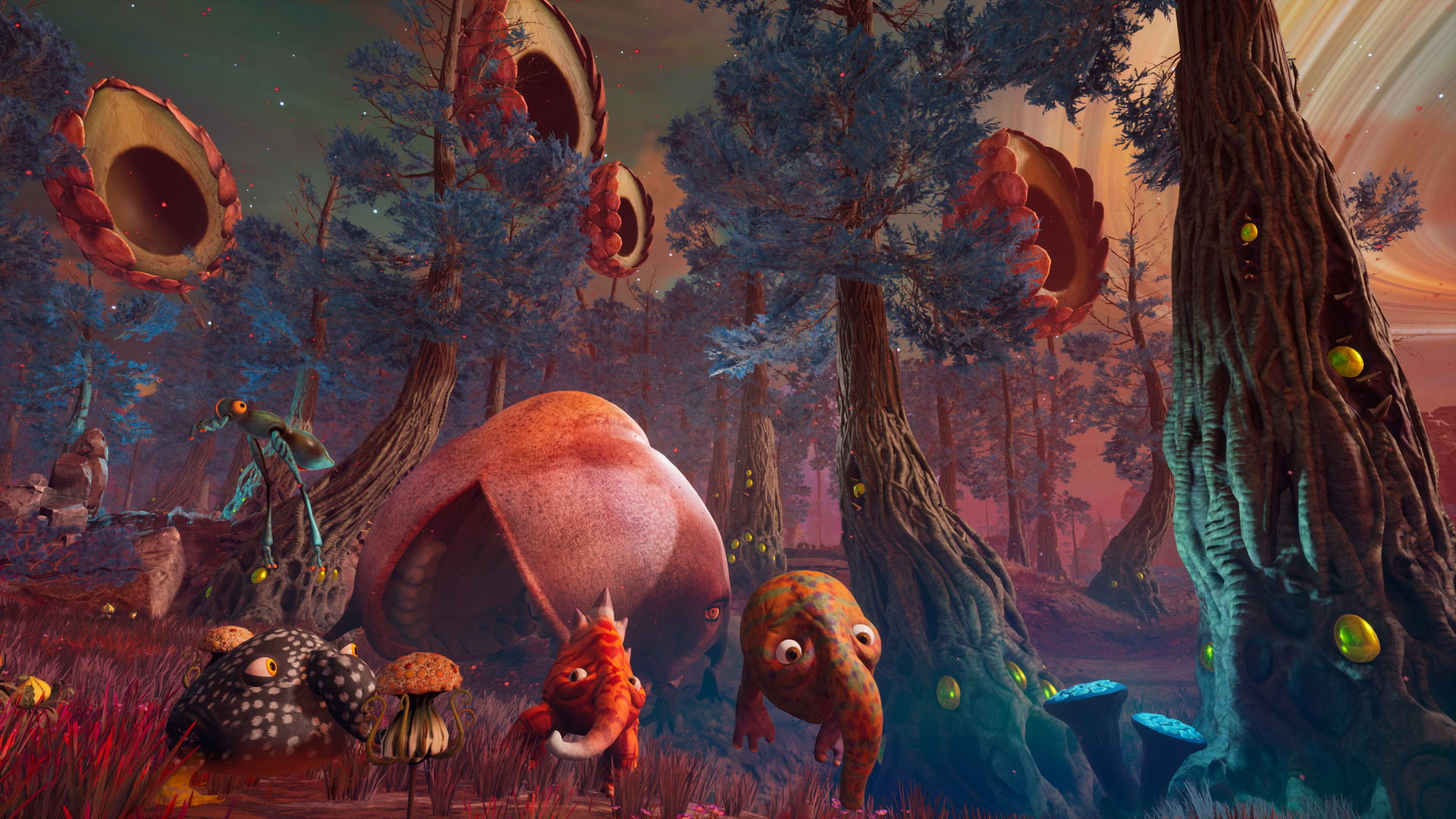 In many ways, The Eternal Cylinder is quite family friendly. There is no blood, gore, foul language, or sexual content to be found, aside from a very large, naked humanoid creature that lacks any genitalia. The game contains plenty of death, however, as the Cylinder crushes everything in its path; some of the friendly NPCs you encounter in old ruins even make mention of their impending doom, as they know the Cylinder is near and lack the strength to make an escape like your party can. The Trebhum in your party can also die if they are trampled by enemies or smooshed by the Cylinder. At the same time, resurrection plays a role as well, as any of your party members can be brought back to life at specific shrines. 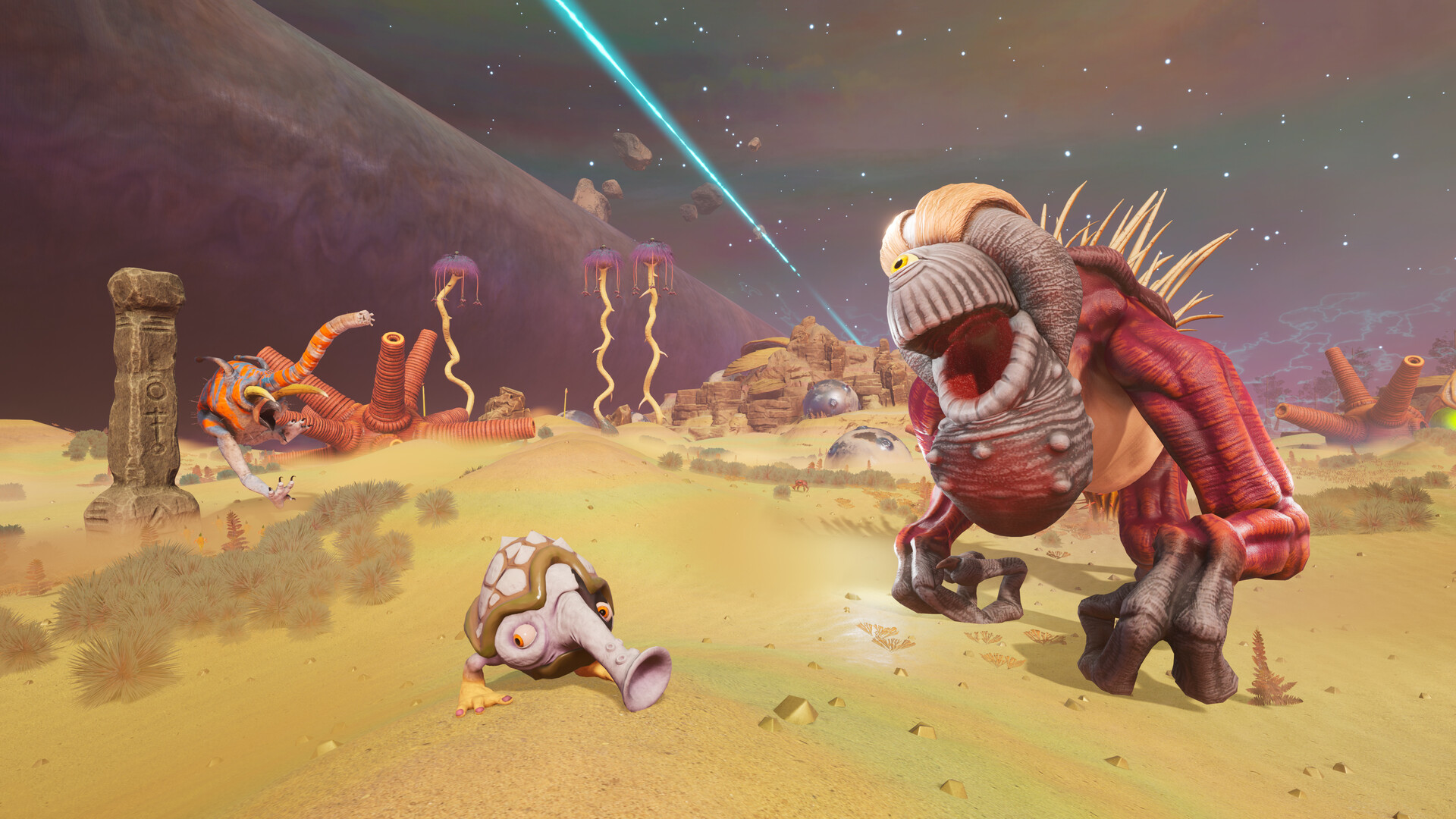 The Eternal Cylinder tells its story predominantly through narration. The game’s narrator relays everything that the characters say to one another and even explains what the Trebhum are thinking at key moments; it almost feels like listening to someone reading a book. I appreciate this unconventional approach to in-game storytelling, and the narration is well performed, with a heartfelt delivery that makes the otherwise mute and strange Trebhum into likeable and sympathetic figures. Unfortunately, this style grows stale and monotonous before long. The game would have been better served with a mix of storytelling styles, rather than relying entirely on this one approach. Furthermore, the story becomes monotonous in its substance as well. Over and over, the narrator explains how the Trebhum have long memories that have somehow been locked away, and they just so happen to remember critical pieces of information right when you as the player need them in the game. The old adage “show, don’t tell” may be cliché, but it exists for a good reason, and The Eternal Cylinder “tells” things to its audience far more often than it “shows” them. 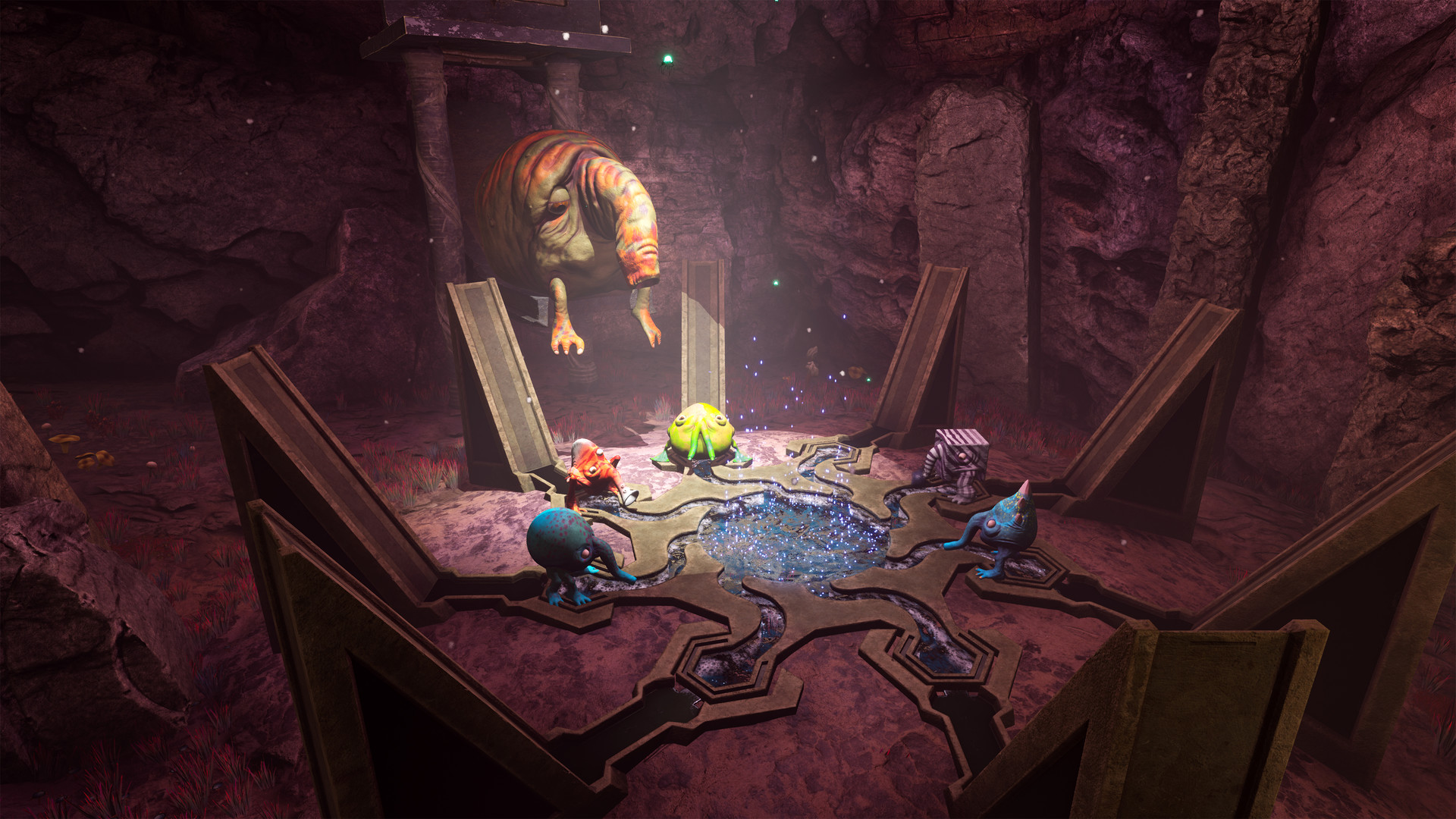 As a Trebhum, your chief characteristic is your ability to suck up small objects with your trunk, store them in your body, and then use those items to transform in a wide variety of ways. Depending on what you inhale, your skin can change properties to allow you to withstand extreme temperatures, your trunk can blow out fire or filter poisonous fumes, and you can even grow a third eye that lets you see things previously hidden to you. Some mutations transform your body in such a way as to let you process the materials stored in your body into new resources, such as water to help keep you hydrated, gemstones to spend on permanent upgrades, and projectiles with which to defend yourself from enemies. The game boasts an impressive array of mutations, and combined with the fact that you can have numerous Trebhum in your party at one time, it encourages you to transform these Trebhum differently so that you can leverage the strengths of all these different mutations at the same time; one Trebhum can process materials for water, another can process upgrade currency, yet another can store food items, and so forth.

However, after a time, I realized that this whole dynamic is not actually that important to your success. Having a host of Trebhum in your party to fill different roles is a nice thing to have, but you can get by with only one or two Trebhum just as well. On the occasions when you need a specific mutation survive in a specific environment or solve a puzzle, the requisite material you need to inhale to make that mutation will be easily found in the area, and once you move on to the next area, you can typically pick up another mutation that overrides the previous one without any consequence. 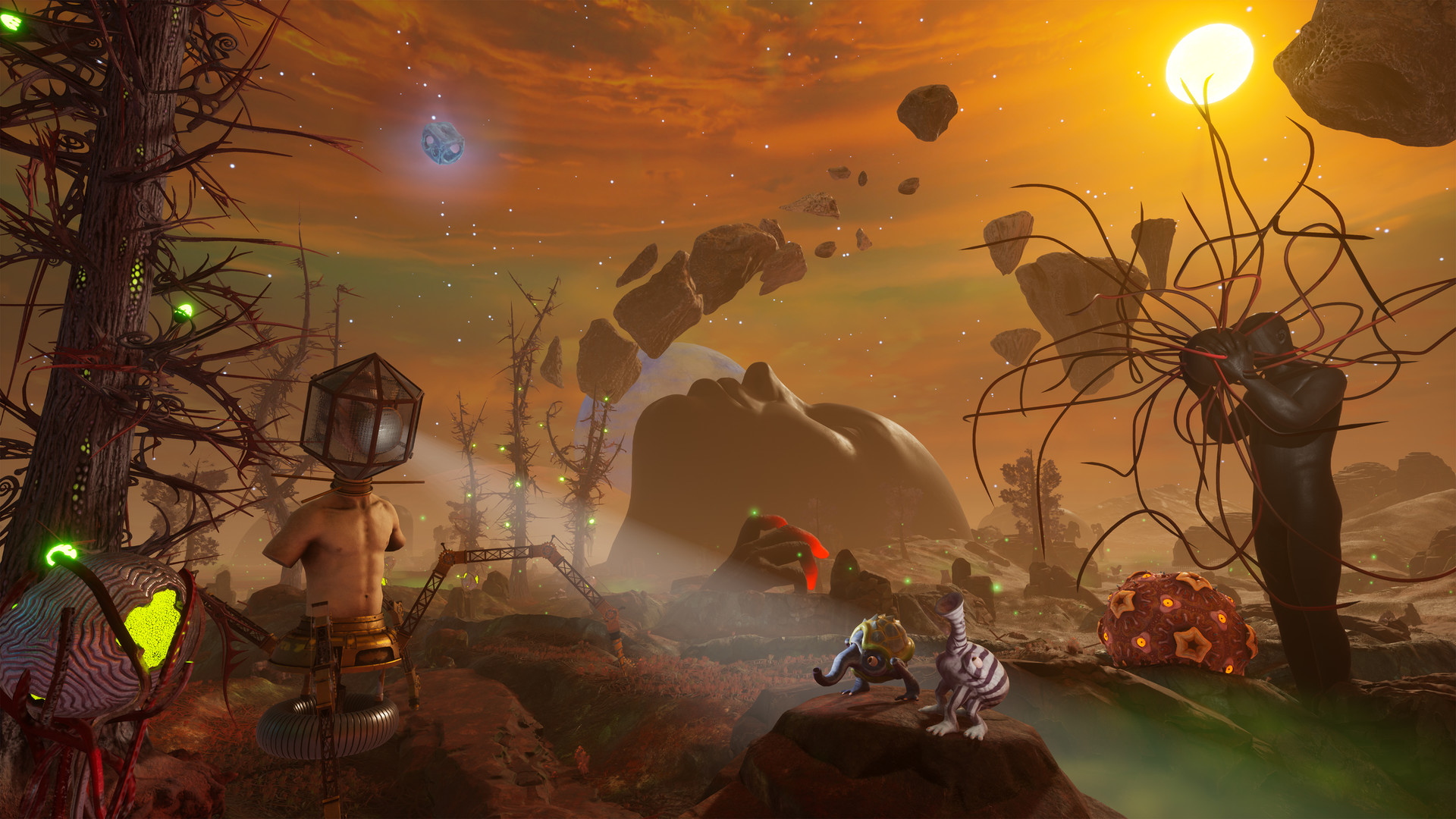 The only gameplay mechanic that necessitates maintaining a large party is in storing items to mix into permanent mutations. Some of the adversarial creatures you find in the game are equipped with yellow lights which, if shined upon you, will remove your mutations. By gathering the right materials and mixing them together, though, you can create permanent versions of those mutations which can’t be taken away and can be toggled/swapped at will. You’ll likely need a large party to hold all the materials you need to craft these improved mutations. However, as mentioned above, if you ever truly need a mutation to make it through an area, the game will practically hand you the ingredients you need on a silver platter, so that you never truly have to worry about getting stuck because you like the right resources.

Furthermore, if a member of your party dies, it costs currency to resurrect them, currency that otherwise would be spent on upgrades. Since you don’t really need a large party, it makes more sense to just leave your fallen teammates dead and use the money on improving your stats like expanding your stamina bar and your food and water reservoirs. 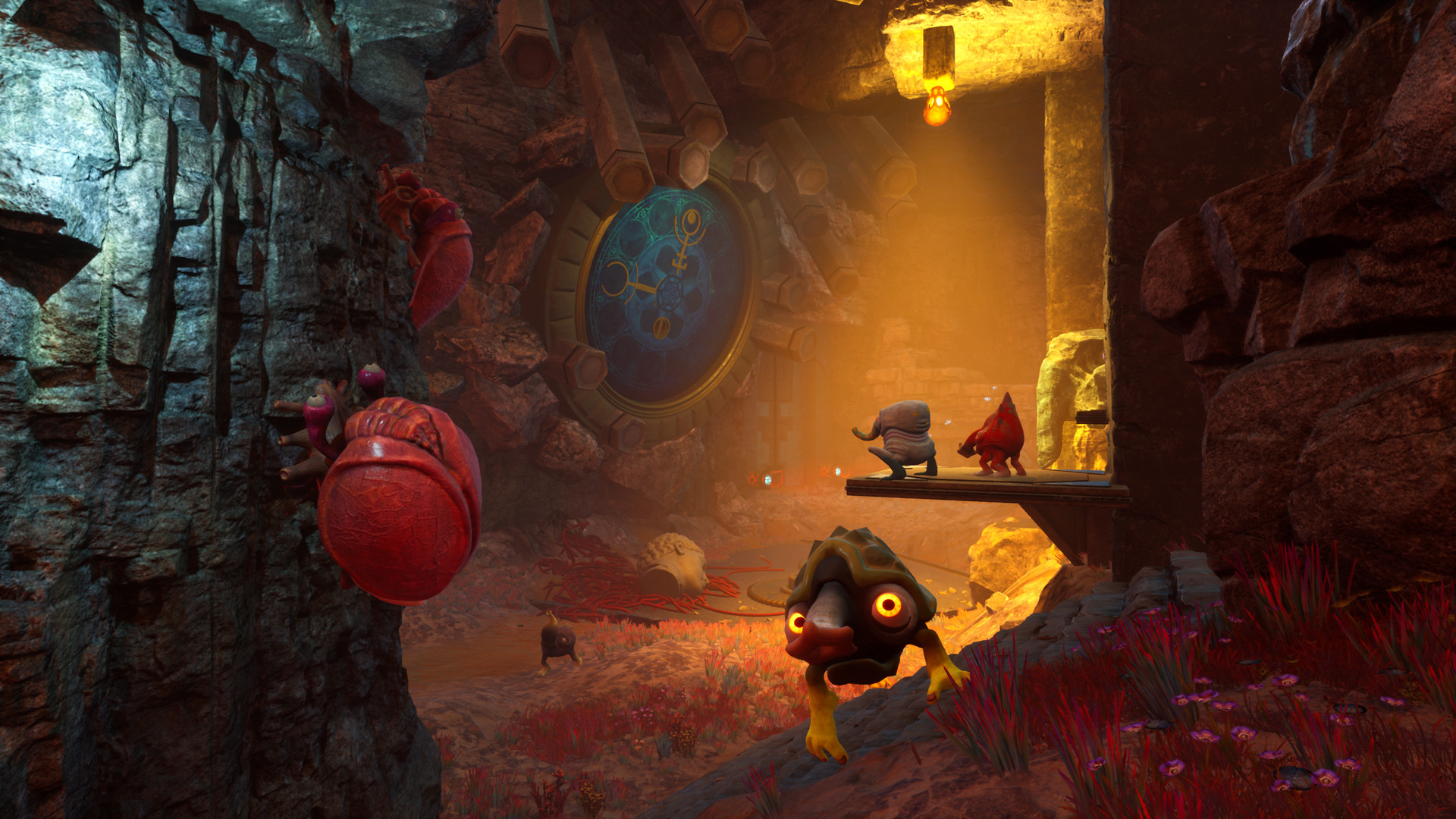 Speaking of food and water, The Eternal Cylinder incorporates some light survival mechanics, in that you have food and water meters to keep filled. Unlike many other games with similar mechanics, however, leaving these meters empty won’t lead to your death; it simply restricts your abilities, such as how much stamina you can build up. Such restrictions aren’t unimportant—escaping the Cylinder requires you to curl up into a ball and quickly roll away from it, which consumes stamina, so having a low amount of stamina reserves can be lethal—but the survival mechanics overall prove much more forgiving than those found in games more dedicated to survival. As such, the presence of these mechanics feels superfluous, and keeping your food and water meters full would subsequently feel like a nuisance, where it not for the fact that food and water appears frequently enough that you rarely have to deal with an empty stomach anyway. 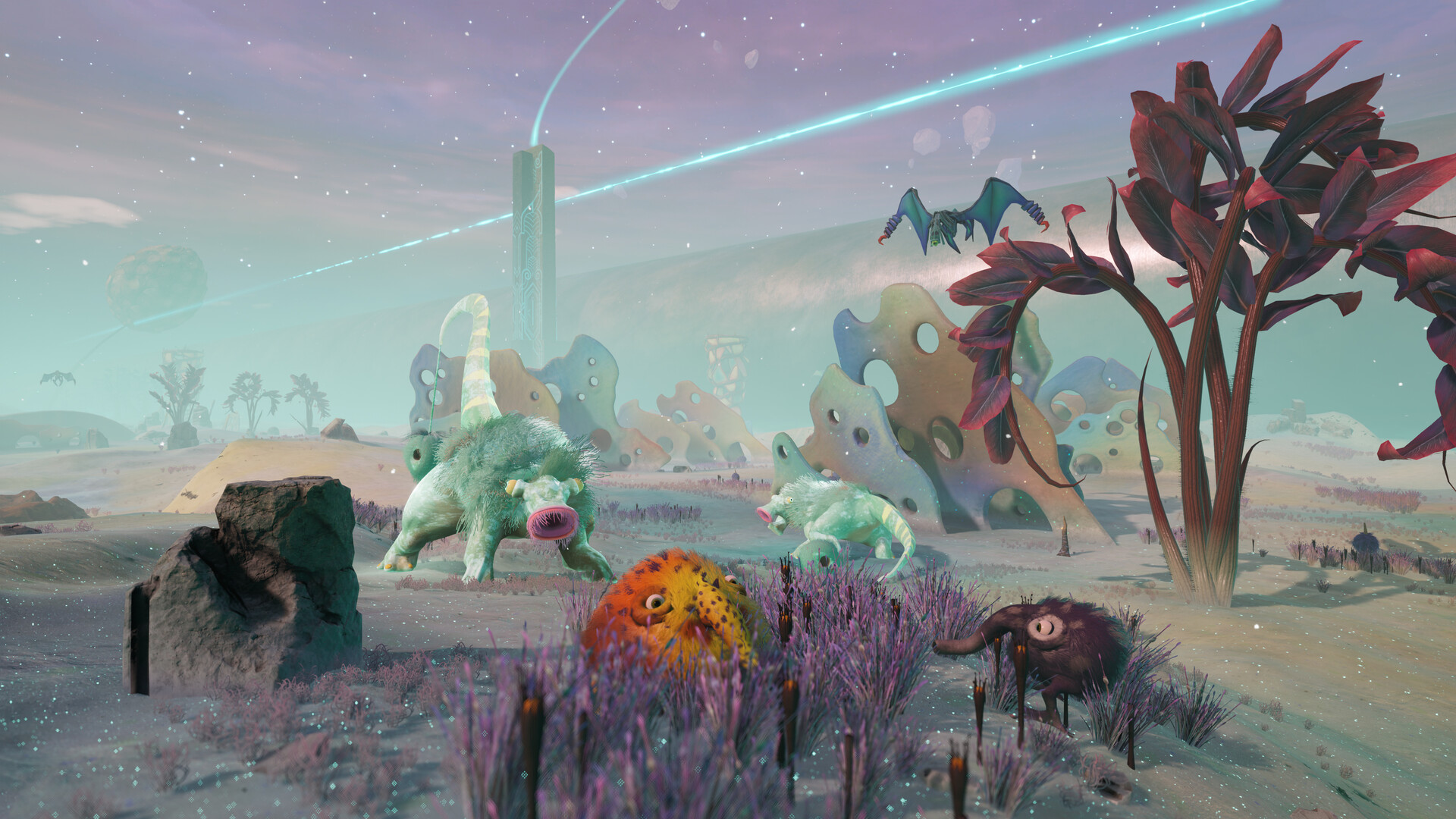 Just as significant to the gameplay as your player character is, as one would expect, the eponymous Cylinder. As the Cylinder rolls toward you, you must curl into a boll and quickly roll away from it, making your way to a tower and stepping on a glowing seal at its base. If you can reach the seal before you get crushed, the Cylinder will stop when it reaches the tower. That gives you the opportunity to explore the surrounding area, harvest resources from the local flora, and delve into caves and ruins containing valuable materials, statues at which you can spend currency on upgrades, and Elder Trebhum who provide you with a bit of lore and inform you of your next. Once you go far enough away from the tower, crossing over a glowing blue barrier that marks the boundary of the safe zone, the Cylinder will restart its movement, and you are forced to press on to the next tower. This cycle makes for a nice rhythm, alternating between the tension of being chased and the relative relaxation of exploration.

I only wish that the world you explore was more interesting. The alien landscape contains a smattering of odd plant life and bizarre creatures, and to be fair, the creatures are quite striking in their peculiarity, including what basically amounts to a giant mouth with legs that tries to eat you, and the aforementioned Servants of the Cylinder which fuse parts of human bodies—such as arms, torsos, or a face—with bits of machinery. However, the world as a whole feels largely empty, lacking any large sections of vegetation or major signs of civilization, apart from a handful of ruins scattered throughout. I would have felt much sadder about the destruction caused by the Cylinder if it was crushing vast forests or massive cities, rather than just a few trees, monsters, and a whole lot of rocks. 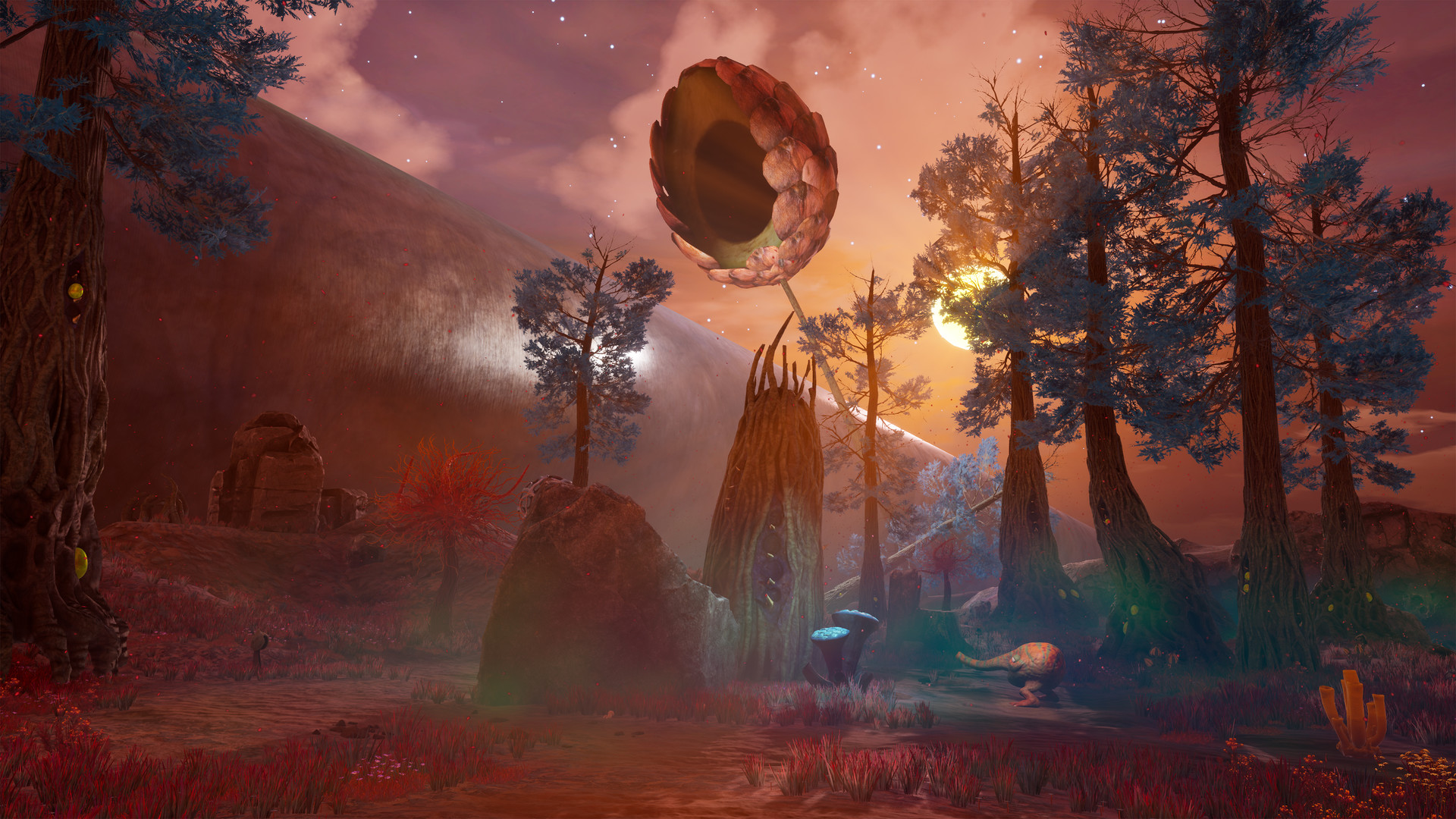 All told, The Eternal Cylinder takes a number of creative and unconventional approaches to its story and gameplay, resulting in an intriguing and unique mix. Once the novelty wears off, though, it lacks the depth and variety needed to maintain an engaging experience. The game tries to sell itself as an inspiring tale of hope with an emphasis on diversity and cooperation, but the game’s own mechanics—wherein keeping a large, diverse family of Trebhum in your party proves unnecessary and possibly not worth the trouble—undermines its narrative thrust. 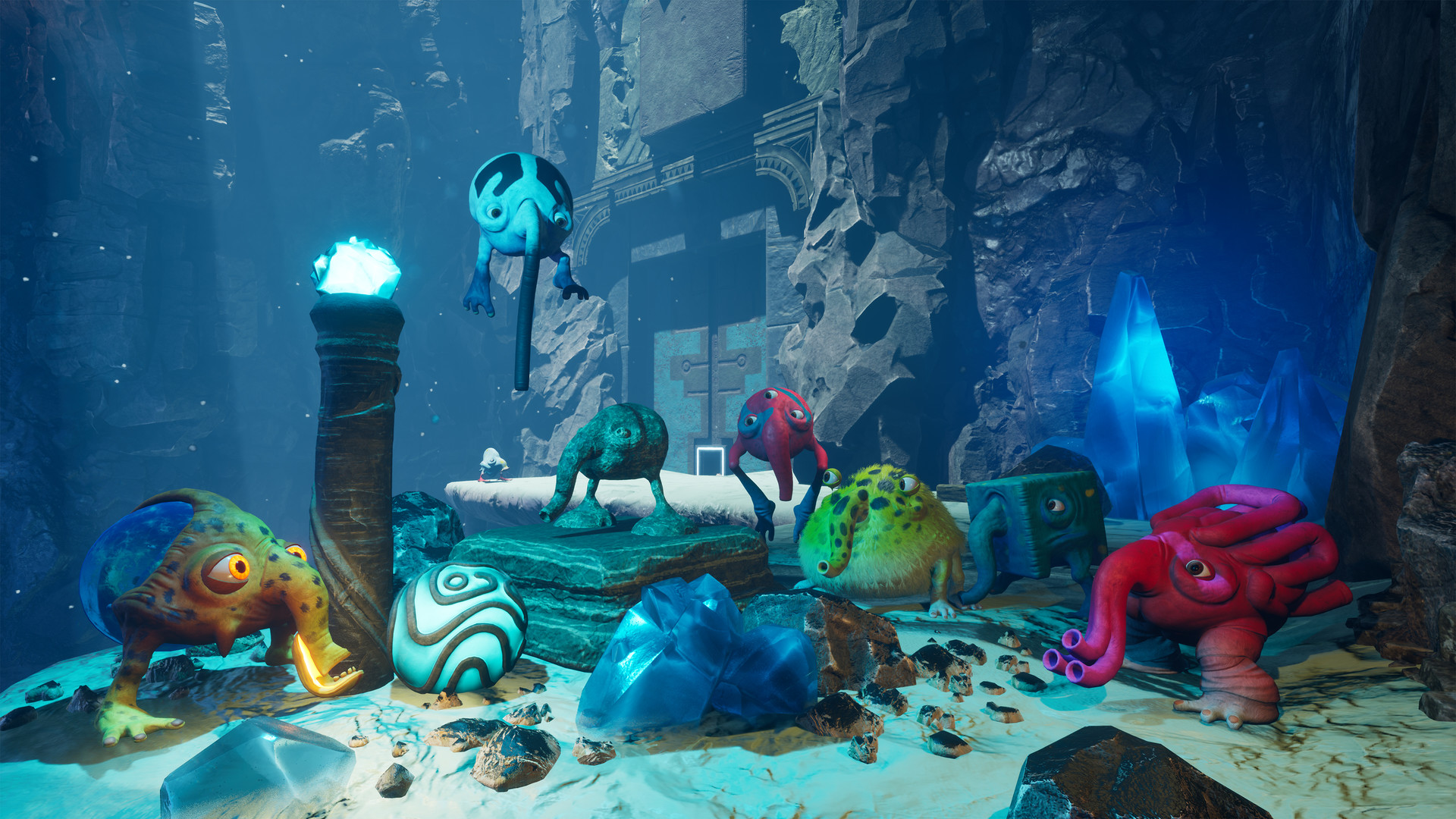