At this point, the battle royale genre is not new. Like the MOBA and Hero Shooter genres, many companies have tried to get a piece of the pie and make the next big game. Spellbreak is the most recent newcomer to the genre and brings a unique setting and fresh gameplay to the table. I’ve spent my fair share of time with the genre, and have kept playing some and have never come back to others—Spellbreak will stick around in my digital library for a long while.

Spiritual Themes: Spellbreak is set in a fantasy world with a magical theme. Characters use magical gauntlets that help them launch elemental spells at one another. Within a match, players pick up items such as runes, amulets, and scrolls to aid them in battle. People who believe that the themes mentioned in this section collide with their faith may want to give Spellbreak a pass.

Violence: During a match of Spellbreak, you won’t find any blood or gore, but experience battles against one another with magical gauntlets. Players use various elements to damage one another, such as fire, electricity, rock, poison, wind, and ice. When a player has been defeated in a squad match, they turn into an orb for a chance to be revived by an ally or be exiled by an enemy.

Spellbreak takes place in a world called Primdal, and a battleground called the Hollow Lands. Proletariat promises an evolving map that will eventually reveal more lore about this mysterious place. 42 players (referred to as Breakers) drop into battle and harness the forbidden magic held within powerful gauntlets. The objective is no different than any other Battle Royale—be the last person or squad standing and avoid the storm. At the low price of “Free” and with crossplay, anyone who owns a console or computer can check out this newcomer to the popular genre.

What I enjoy about Spellbreak is how simple it is to understand, yet strategically deep. There are only six gauntlets (Fire, Ice, Rock, Toxic, Wind, Electricity) instead of a dozen different weapons. When it comes to pick-ups, you only need to worry about shield and health consumables along with upgrading three different items (boots, amulet, belt) that strengthen you throughout a match. Players can also acquire Runes, which adds another layer of strategy to your loadout. Aside from the starting gauntlet, it is wise to pick up a second. All of that information was taught to me in a very short tutorial, and soon I was firing spells at my opponents. 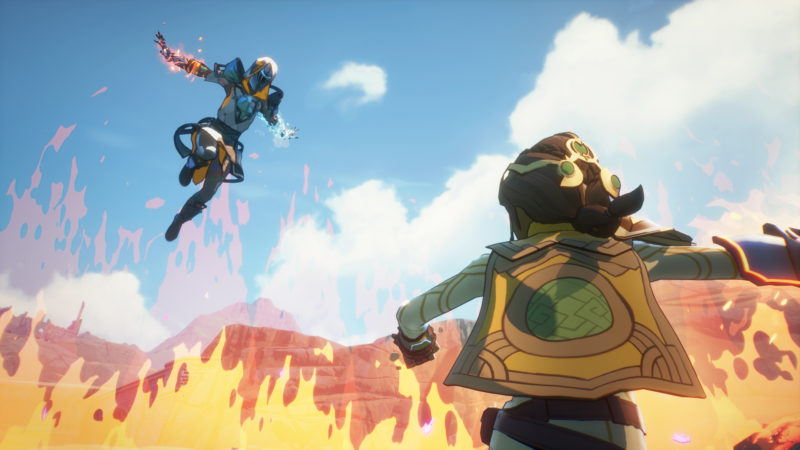 Like a typical BR, tiers of rarity determine the strength of the Runes, Equipment, and Gauntlets. It’s very easy to upgrade as the lower tier item automatically swaps out for the one that is stronger when picked up. Picking up the previously mentioned equipment strengthens your run speed, mana pool, and armor value. The available runs are mostly transportation-related, such as flight or teleportation, but others like Wolf’s Blood and Shadowstep are great tools.  They add a nice layer of strategy, but it’s utilizing the magic of the Gauntlets that separate the beginners from the more experienced players.

The Gauntlets are the main weapons of Spellbreak, and two can be used at a time with primary and secondary mapped to the shoulder buttons.  A fascinating aspect of gameplay is the physics involved in mixing the elements with specific gauntlet combinations or snuffing out an enemy’s spells. For example, creating a whirlwind and launching a fireball into it creates a fiery tornado, but the basic wind attack also puts out sections of an enemy’s firewall. Though battles sometimes amount to who can throw out their attacks the quickest, using your equipped gauntlets in tandem with one another becomes super effective. I personally need to apply those physics to my tactics much more, as I greatly admire such depth. 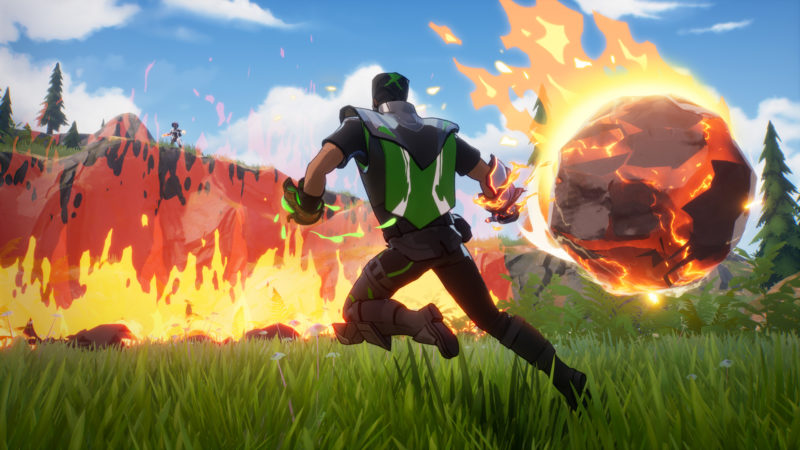 Trying to make it through the rest of 2020 like…

I wish I admired the battlefield as much as I do the battling. Spellbreak shows its weakness in is the variety of the environment. I like the concept of the shattered medieval lands full of broken villages, castles, and fortresses, but it doesn’t change much beyond that. One particular desert area stands out from the rest of the map, but other parts look very similar to one another. I would’ve liked to see biomes that strongly vary, much like how Apex Legends does with its King’s Canyon map. Even so, the Hollow Lands make a fun battleground, but I look forward to seeing how the map will evolve in future updates.

The same could be said for the game’s overall presentation, but I appreciate the cel-shaded graphics. I also enjoy the soundtrack, especially when dropping into the map. Some have compared the visual presentation to Netflix’s Dragon Prince, and I agree with those remarks. Many games before Spellbreak have aspired to get silly with their style and personality since Fortnite became so popular, which makes me appreciate that a different direction is being taken. However, it may be only a few steps away from ending up like those that came before it.

Without a price tag, Spellbreak includes F2P mechanics, such as premium currency and a store in which you can buy skins and other cosmetics. That currency can be earned as you increase your Mage rank, but just as with any game of this nature, it is best to spend a few bucks of your real money if you want something. At the time of this review, there is no Battle Pass, though I expect there will be one soon. I haven’t seen any pay-to-win schemes, and nothing significant is locked behind a paywall—I consider that a win. 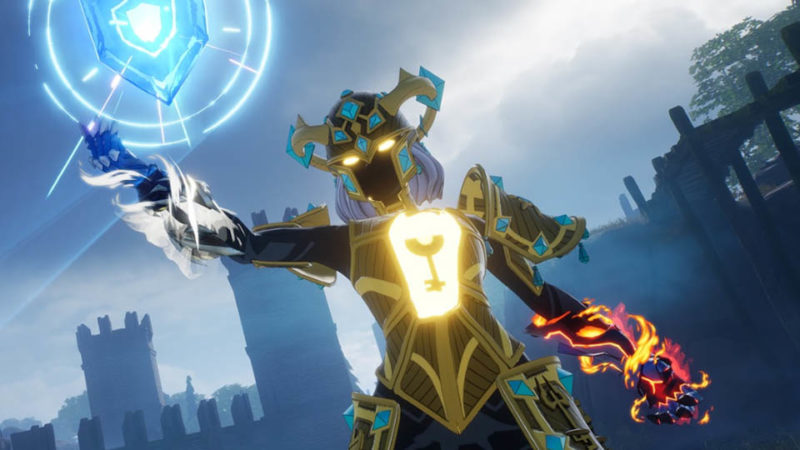 Style doesn’t earn you a victory, but looking cool makes it much sweeter.

Spellbreak also includes cross-play and cross-progression, which are features that have been a much more positive industry standard in the F2P market. All it takes to carry your progress to different platforms is to create an account and then log into your console or PC. After playing on my Xbox One X, PS4, Nintendo Switch, and PC, I was pleased that these features worked flawlessly. I was able to take my account and flex my Master Founder’s Pack skins (kindly provided by Proletariat’s PR rep) in front of my squadmates. My base PS4 was the weakest platform out of the bunch with some minor loading issues, but none of that got in the way of my overall experience.

Spellbreak is a battle royale game that could bring in some players that aren’t into the genre. The gameplay loop is nothing new, but the presentation and setting might be enough. The lower player count makes for some short and entertaining matches that are full of frantic combat. The Hollow Lands currently lack charm and discovery, but that will change as this world evolves through the upcoming seasons. If you find yourself needing a break from another world you frequently drop into, Spellbreak is worth jumping into for a few matches to see how it stacks up against its battle royale siblings.

Spellbreak is a fun and frantic battle royale that still has room to grow as it evolves with future seasons.

Posted in Gaming, Reviews, Xbox One