There are times when I want to play a game that doesn’t require a lot of brain power. I just want to sit down turn on my gaming music mix, and slay some bad guys. Rage 2 is a great game for a gaming session where you just want to turn your brain off and shoot some post-apocalyptic bad guys. Rage 2 excels with great gunplay and neat powers, but the game suffers from a lack of motivational plot. I don’t always need for a game to have a deep meaningful story; but I do need the game to motivate me toward the next objective. The characters and story of the Rage 2 really don’t give me a reason to care about them, but even so, the game is fun.

Rage 2 is rated M for Mature for violence mainly, but also for foul language and some suggestive, adult themes. The game takes place on post-apocalyptic future earth very reminiscent of Mad Max: Fury Road. The populace of this future earth is brutal and savage. I would not recommend this game to anyone under the age of 17 for the following reasons:

Violence—The violence of Rage 2 could be seen as over the top because most of it is gory and bloody. When you shoot enemies from a distance, there’s not much blood, but shoot them close up and they will sometimes explode into a bloody mess. It’s possible to chop off limbs with bullets, grenades, or boomerang weapons. When a player is in the Overdrive mode, all bullets will explode enemies as do the melee attacks with the butt of the gun.

Adult Themes—The post-apocalyptic land of Rage 2 is filled with people with disturbing sexual ideas. There is a location that hosts a game show called Mutant Bash TV where the player signs up for a deathmatch to kill a bunch of mutants. This show is run by an aging showgirl host who makes several inappropriate comments throughout. Several scantily clad, oiled men and women wearing large masks follow the showgirl host around every time they interact with the player. In between the matches, I got to see some of the NPCs hanging around the studio. I saw one man dressed in a BDSM costume pretending to chase another man who was on all fours pretending to be an animal. 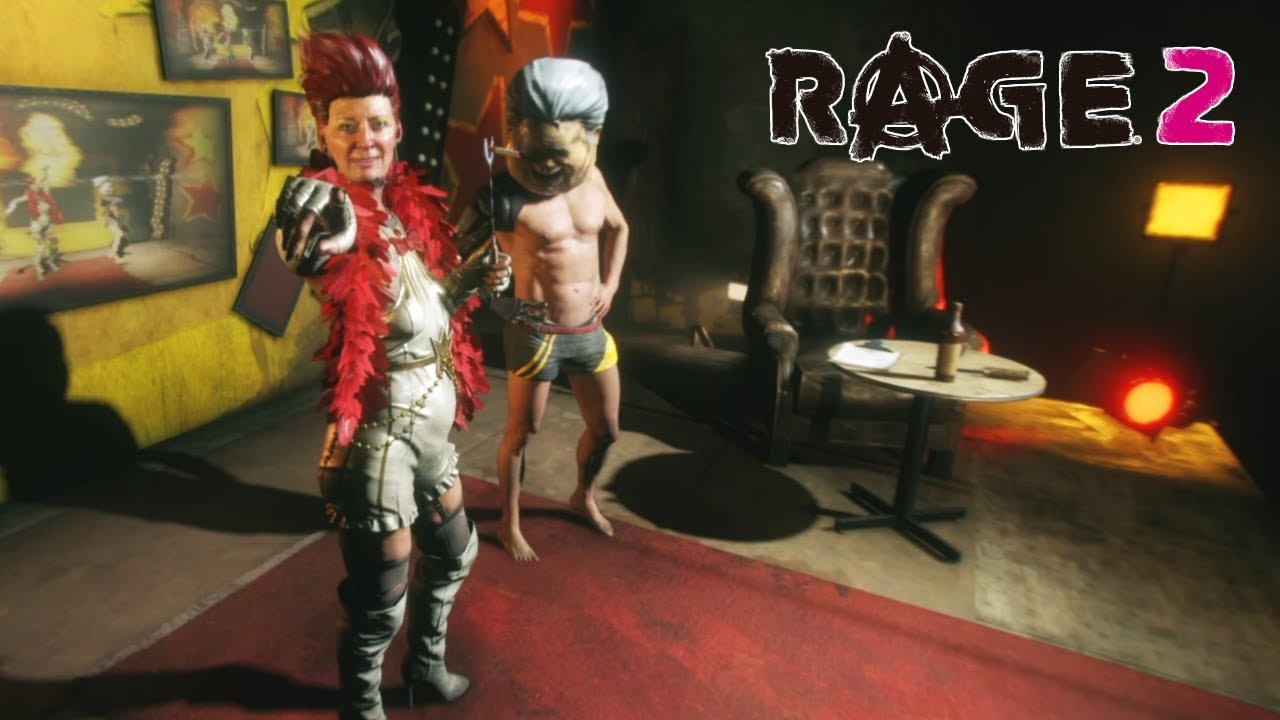 Drug Use—I never saw any drug use by characters in the game, but there was an NPC who appeared to be shaking and talking to another NPC about drugs. In the swamp area of the map, marijuana plants grow everywhere. The plants seem to have been planted by the crash of an eco-pod in the area which can be found near fields of marijuana plants. Bars can be found in each of the towns where NPCs can be seen slumped over tables or the bar apparently drunk.

In Rage 2, the player takes the role of a young man or woman named Walker, the last Ranger in the Wasteland. A meteor strike wrecked earth several years before Walker was born, creating the Wasteland, but humanity found a way to renew the planet by calling down Eco-pods that began to re-seed the planet. At the start of the game, Walker lives in one of the few strongholds in the Wasteland called Vineland. The game starts with an attack on Vineland by the Authority, a cybernetic army controlled by General Cross from the first Rage game. The player gets a standard tutorial level during the attack on Vineland where the game teaches the player the basic controls.

It frustrated me that the game spent a lot of time going over how to move, jump, and shoot and no time diving into the menus and the crafting. Rage 2 doesn’t break any new ground with the controls so if a player has played any FPS in the last five years they know all the controls. I didn’t fully understand that I could craft health items until about an hour into gameplay by mistakenly buying an upgrade at a store. I would have preferred that the game spent more time teaching me this instead of how to move.

Once I played through the tutorial level, I got access to the Ranger suit which Walker gets from a dead Ranger. There’s a gory scene when Walker pulls pieces of the dead Ranger out of the suit that he uses throughout the game. The Ranger suit gives the player access to powers like dash, double jump, slam, and overdrive. Most of the powers are not given to the player at the beginning of the game, but they can be obtained by finding Arks in the open world of the Wasteland. Arks contain the lost technology and weapons of the old world.

The variety of weapons in the game is limited. Unlike some other FPS games where the enemies drop weapons, the player obtains weapons only by finding them in Arks, and there are only eight guns to find in the entire game. Despite the limited inventory of the guns, they weapons handle really well, and the guns are fun to shoot. I enjoyed the shotgun which has a fun knockback feature so that when I hit an enemy with a shotgun blast, they would sometimes fly backward. I loved the revolver the most because it was like a flare gun. When a player shoots an enemy with the revolver, the rounds can be ignited inside the enemy causing them to the burst into flame.

Once the Wasteland opens up to the player, they get a truck and the nebulous goal of defeating General Cross and the Authority. The player meets three important people in the Wasteland: John Marshall, Loosum Hagar, and Dr. Antonin Kvasir, who help Walker towards defeating General Cross. Most of the missions that these three will send the player on are simple missions such as go to location X, shoot all the bandits there, then flip a switch to complete the mission. Along the way, the player will see question marks on the map or they may run into gas stations and roadblocks. Once the player finds these locations, it’s pretty much the same thing: kill all the bandits, maybe flip a switch or turn a wheel and you’re done. There are other things to find in the world such as Arks and the last known resting place of fallen Rangers, but again most of those locations have bandits that need to be killed before you can flip the switch to open the Ark or find the fallen Ranger.

There’s no loot to be collected, and as I stated before there are a limited number of guns to collect. The locations on the map are where players find resources for crafting items and for upgrading the Ranger powers. Players can learn to craft health shots, grenades, power boosts, and boomerangs called Wingsticks through purchasing perks from vendors.

The lackluster story and flat characters disappoint me most about Rage 2. I recognize that most FPS games follow the formula of go to location X kill everybody then push the button which will do Y so you can progress to Z— rinse and repeat. The reason that I state that missions seem simple has to do with the lackluster story; I didn’t care about the NPCs or their motivation which made the missions feel repetitive. What makes this problem worse is the disconcerting light-hearted tone of the pre-launch trailers.

Or this trailer which has some foul language:

After playing the game for several hours, I didn’t feel like the time of the game is very light-hearted. I killed hundreds of people and mutants by that point, and the game was not really giving me a reason to feel like this was some kind of fun romp. I felt like Rage 2 wanted me to take the plot seriously because NPCs maintain a very serious tone when they speak about the missions, but the pre-launch trailers made me expect a goofy game. It may be that Bethesda was trying to compete with the Borderlands franchise, but the incongruent tone of the game doesn’t match the hype.

I will continue to play Rage 2 because the action and gunplay are awesome. I can overlook the lackluster story and confusing tone because I’m hooked on the action. It’s a game that I can turn on crank up the heavy metal music and play for a couple of hours. It’s also enjoyable because of the single player content which doesn’t require other players and an internet connection in order to enjoy. Rage 2 is a game that I have recommend to friends who aren’t interested in story or plot but who want pure action.