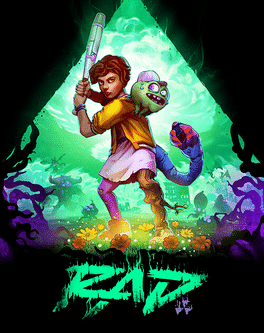 Let’s start out with a little history lesson about the 80’s. Society thought that the world was very close to an apocalypse, especially because of the Cold War. This can be seen by the pop culture of the time in movies like Mad Max, The Day After, and Steel Dawn (Editor’s Note: And games like Hotline Miami and Black Future ’88). Double Fine Productions started out with the idea of an 80’s style apocalypse. What if there were two apocalypses? How would the world look? The game that they developed resulted in the highly enjoyable RAD. This game captures the feel and style of an 80’s teen pop movie with highly enjoyable rogue-like gameplay. I’m tired of the amount of rogue-like game being dumped on the market, but I can say that RAD really hooked me from the start and keeps me coming back.

RAD earned a “T for Teen” for juvenile language and fantasy violence. The game more closely matches an 80’s cartoon content, which I found enjoyable. I would recommend the game to teens and adults. 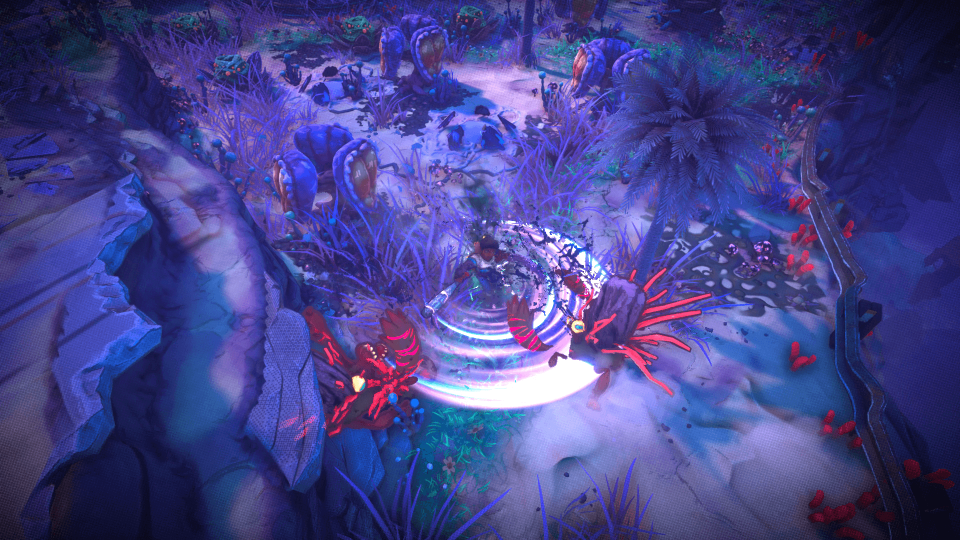 The violence contained in the RAD consists of physical aggression toward mutated creatures in the wasted land. The players use a bat as the main weapon, but there are also some mutations which can give the player weapons such as acid pools, spikes, or exploding heads. All creatures die by shriveling up into a black lump until they disappear. The only blood that I noticed in the game came from the hero character who leaves a blood trail when they’re low on health.

RAD’s population consists mostly of teens and preteens. The dialogue reflects the teen level of humor, and from time to time, they will use “a**” or “s***” in the written dialogue.

RAD starts after the world suffers not one, but two apocalypses that have completely wrecked the landscape and mutated animals. At the start of the game, the elder of the village informs everyone that a new power source needs to be located in order to keep the village alive. The elder looks to the youth in the village to find the hero. The player can pick which hero they want to be at the start of the run. Other than cosmetic differences, there are no discernible variances between heroes. Once the player picks the hero, they begin a run which means they progress through each level until they win or run out of health. If the player wants to switch heroes, they will need to stop their current run and start a new run with another hero.

When I started playing the game, I was amazed at how well the game captured the 80’s style in music and visuals. I had been hoping that RAD would be able to emulate this style when I first learned about the game, but it went above my expectations. The music that I heard from the loading screen to the gameplay had me bopping my head to the beat. I kept thinking to myself that I knew the tune that was being played from a movie or television show I used to watch. As far as I know, the developer composed the music originally. 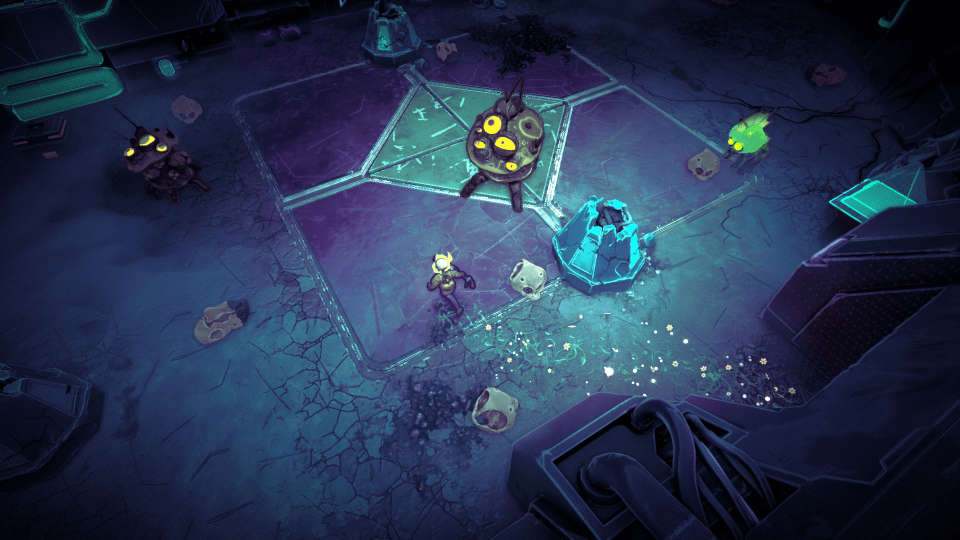 Even though the landscape of RAD is post-apocalyptic, I saw so much 80’s styling in the game. The village or home base the player uses is a multi-level mall with neon lights and colors everywhere. The villagers all wear high tops, jeans, and some even have colored mohawks. Throughout the landscape, I found references to VHS tapes, laser discs, and Rubik’s cubes. The heroes’ village uses cassette tapes as currency and 5.25 inch floppy discs as keys. Everywhere, the game oozes 80’s references, which make the game retro for some players and nostalgia for other players.

Gameplay for RAD keeps up with the high standard of quality that the music and style of the game sets. The player controls the hero from an isometric viewpoint. At the start of the game, the hero undergoes a transformation that allows them to survive in the world outside of the village called the Fallow. The transformation also allows the hero to take on mutations from defeating mutant creatures, which I will cover a little later. At the core of gameplay, RAD contains some very responsive platforming gameplay. Players can make their hero run and jump around the world easily while using the bat as the primary weapon. RAD made each run feel fun and challenging since there’s not a lot of health boosts in the Fallow. As the hero runs, they leave behind a trail of green ground cover, and when the hero gets near some mutant plants, they change into green plants. Another helpful feature of the green trail is a speed boost, when the hero runs along their own trail.

Once the hero defeats enough mutants creatures he/she gets a random mutation called an exo-mutation. Exo-mutations will give the hero offensive abilities such as spikes or flame shots. Besides the exo-mutation, there are also endo-mutations, which can be gained by exploring the underground tunnels in the world. Endo-mutations boost the hero by giving them extra critical hits or allowing them to see hidden enemies. The hero can have at least three exo and three endo mutations—after that the mutation get upgraded and changed. Mutations also affect each other, causing various combinations when paired together. 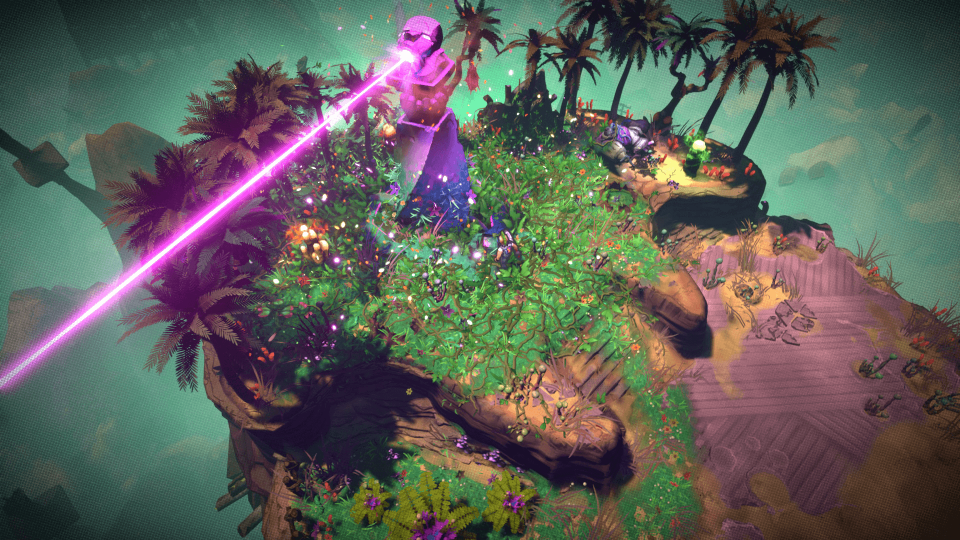 Unlocking the door and healing the land

RAD procedurally generates the landscape each time the player enters the Fallow. I found that the procedural generation of the landscape felt very new each time I played. I noticed landmarks that were repeated, but that didn’t affect gameplay. In addition to procedurally generated landmarks, the game also generated weather features and day and night conditions that affected the landscape. The creatures in the Fallow can be challenging, but the game includes some handy menus which allow the player to start with more health or higher damage. As the player progresses to higher levels, the creatures get larger and gain more mutations.

One thing that I don’t like about some rogue-like games is the sense of futility when I repeat run after run without earning anything. RAD solves that problem by rewarding the player with weapons and features based on how well their run went before dying. I enjoyed earning new bats within a couple runs, but I also like getting new style selections. The style selections allow the player to start a run with some special variables, such as mutations. At the end of each level, RAD gives the player the choice to move onto the next level or go back to the home village. This kept me from feeling like I was beating my head against a wall. I could save my currency or switch out my bat before moving onto the next level.

RAD feels like a very well thought out game with many different player types in mind. I think that anyone would get hours of enjoyment out of RAD.