While simulators have long played a role the video game space. Sports games and racing games often strive for a large degree of realism, and other franchises like Microsoft Flight Simulator take the technical side of simulation to an even higher level. In recent years, however, we’ve started to see some more…quirky introductions to the simulation space, such as Farming Simulator and American Truck Simulator. Now, we have another amusing oddity: PowerWash Simulator, by developer Futurlab. In this game, you are plopped into the fictional town of Muckingham with a simple job: grab your power washer and start hosing down the impossibly dirty vehicles and buildings that this city has to offer. It’s not exactly the height of realistic simulation—your power washer is just a simple gun, needing no big motor or cords, and you run no risk of slicing up your fingers and toes if you’re careless with your watery blade—but no other game on the market has ever even tried to simulate something like this. Can this intrepid indie title make a mark with its unique and simple concept? 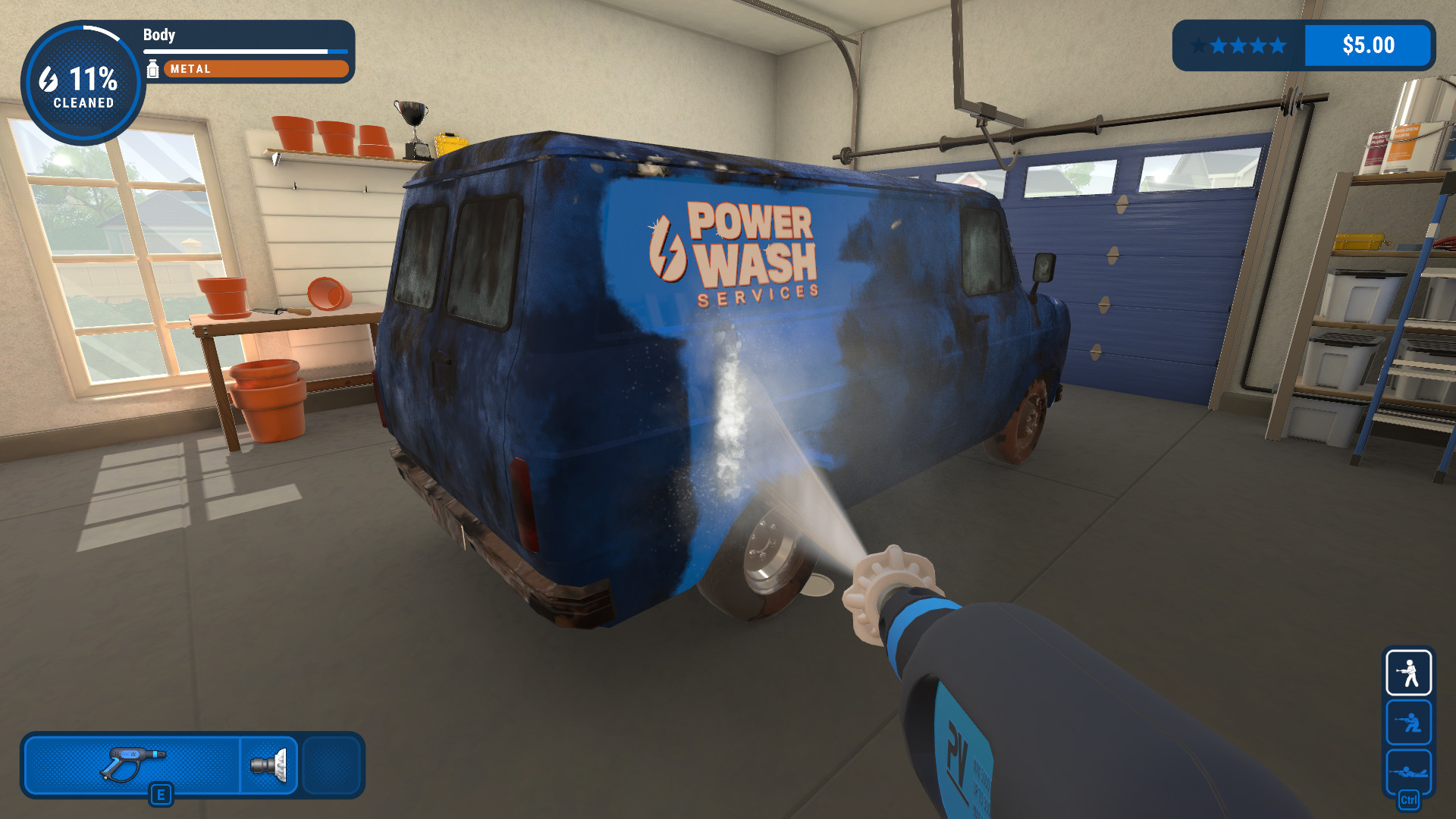 For a game brimming with filth, PowerWash Simulator proves remarkably clean. There is no foul language, violence, or nudity whatsoever. In my time playing the game, I have found only a couple of matters worth bringing up here. First, the game implies that two women who live together are in a lesbian relationship with one another; this is portrayed through the presence of numerous instances of heart graffiti that appear on their vehicle (and which presumably they added themselves as a means of expressing their feelings for one another). The second—and this is technically one of the only elements that could legitimately be referred to as a SPOILER—relates to a group of monks who are revealed to have been responsible for the humorous yet mean act of egging the mansion of the town’s lousy mayor. 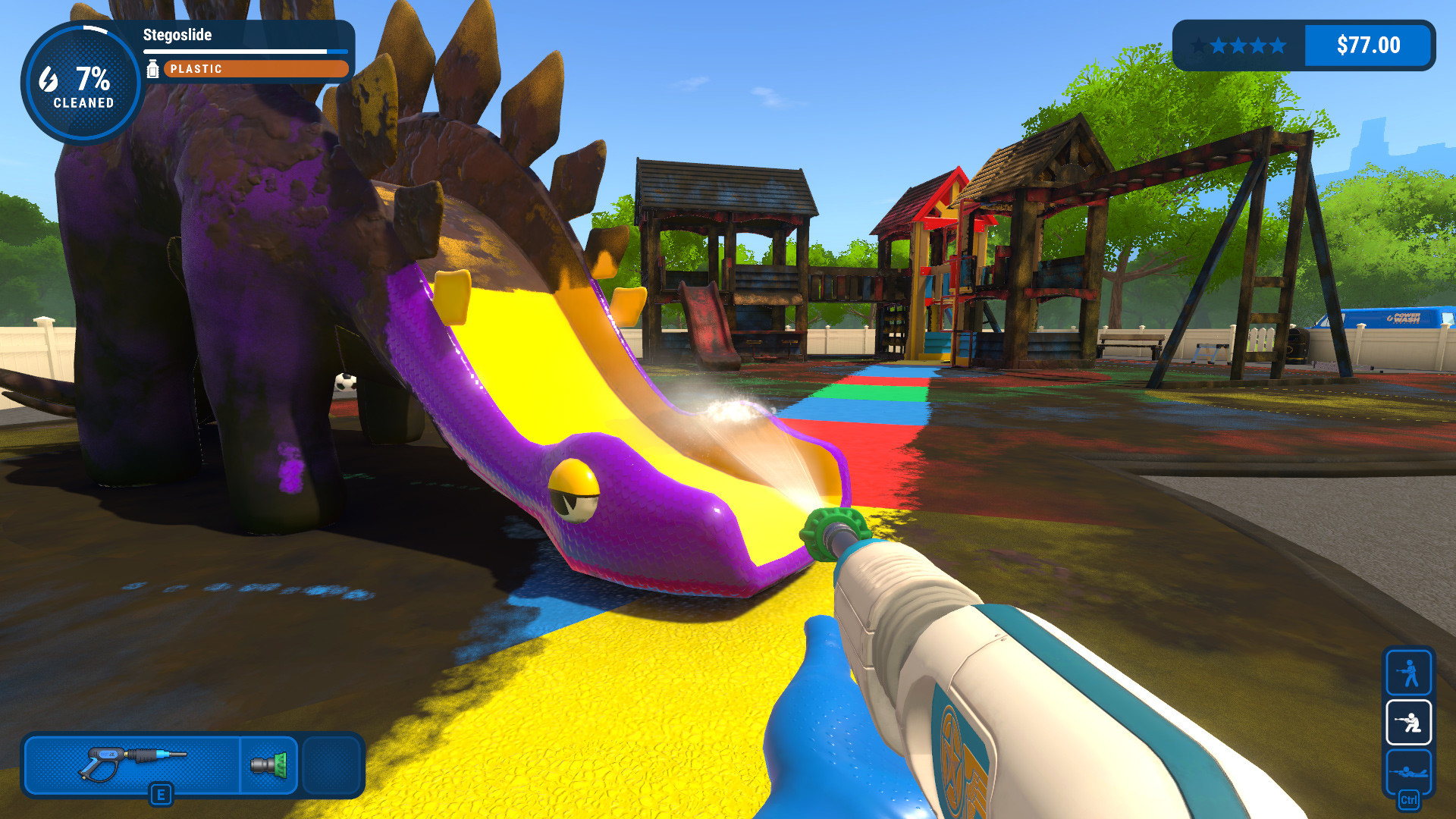 Just like its narrative premise, PowerWash’s gameplay is also remarkably simple: your goal in each level is to completely wash off the dirt, grime, and other forms of muck that cover the surface of the object(s) in question, be it a van, a house, or a skatepark. There are no other significant gameplay mechanics present here; you spend the entire game doing the same basic task that you are given right at the beginning. In most video games, such a scenario would amount to a nightmare of boredom. In PowerWash Simulator, however, this turns out to be a strength, for the most part. The objects you wash are impossibly dirty when you begin each job, obscuring much of the objects’ aesthetic beauty. Cleaning these structures and vehicles feels satisfying, even addictive, because you can clearly see your progress. Furthermore, each dirty object is divided into many distinct segments, and each segment has its own progress bar to show you how clean you’ve gotten it. For example, a car will have meters for each of its headlights, each of its windows and mirrors, each of its doors, each of its tires (or rather “tyres,” as this British-made game spells them), and more; a house, meanwhile, will have dirt meters for things like the roof, the eaves, the steps, the walls, and so on. Every time you finish cleaning off one of these parts, you earn a small amount of money and hear a satisfying cha-ching sound effect. 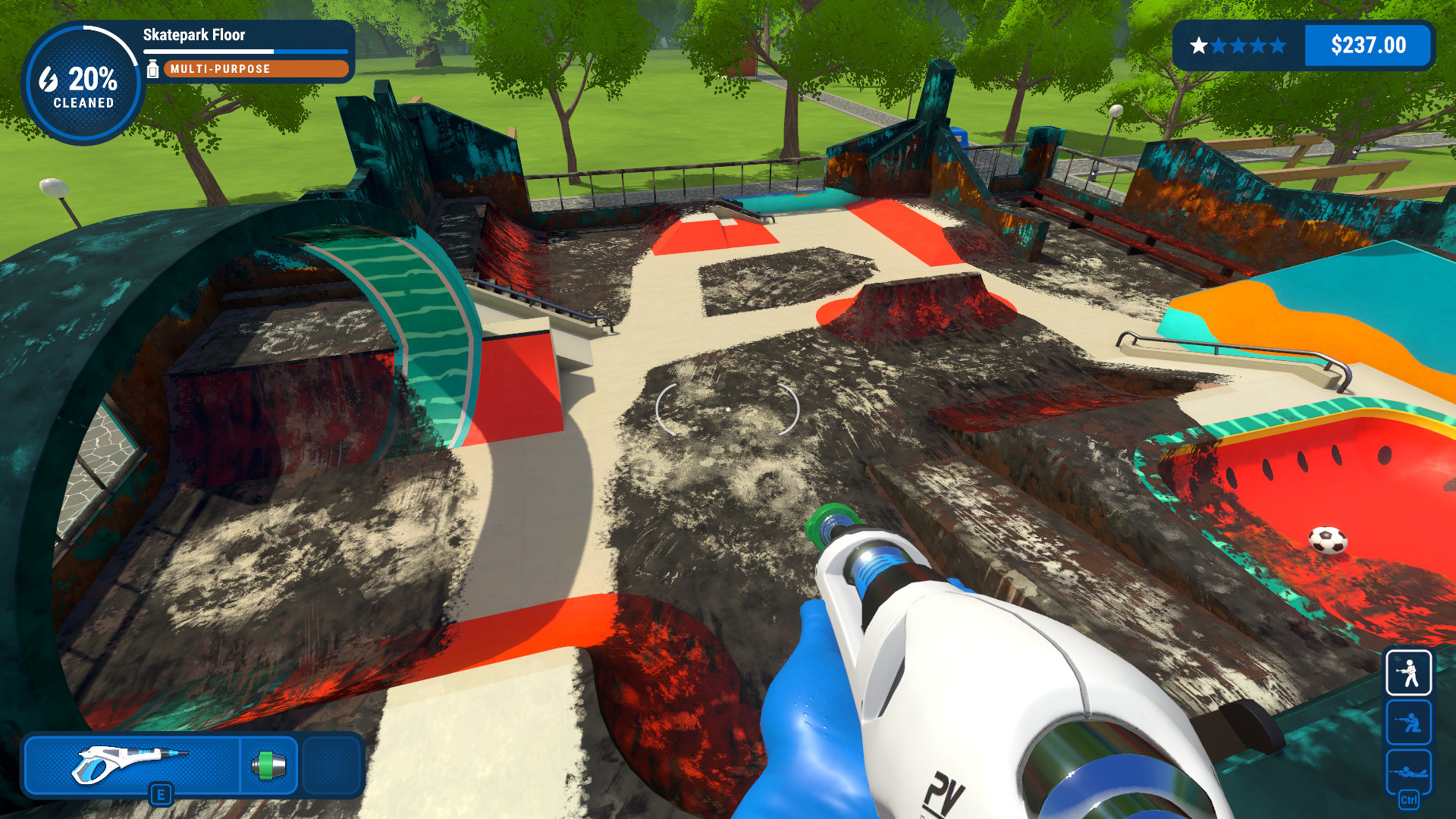 Another small reward appears in the form of text messages that appear on your phone every time as you clean more of the object. These messages typically come from your clients and provide mildly humorous anecdotes relating to the object you’re washing or the clients’ personal lives. Combined with the aforementioned incentives built into the structure of the core gameplay, these small rewards further enhance your sense of progress, enticing you to keep going.

The money you earn allows you to purchase various upgrades, including more powerful sprayers, extensions, and soaps that specialize in cleaning dirt off specific types of surfaces like metal or wood. Additionally, you can also buy cosmetic color changes for your outfit and your washers. I don’t recommend purchasing these early in the game since the upgrades provide a tangible benefit to the gameplay experience, but it’s a nice feature nonetheless, especially once you’ve eventually purchased all the upgrades and if you’re playing with friends.

One element of the game’s design that I didn’t expect to be as noteworthy as it turned out to be is the audio design. It didn’t take me long to tire of the constant sound of the power washer, especially as I started tackling larger projects. This would have been a major problem given the nature of the game, but the designers included a robust audio section in the game’s settings which allows you to adjust the multiple elements of the overall sound, including the water volume and the ambient nature sounds. In the end, I turned the water volume way down and just enjoyed the peaceful ambient sounds running in the background, making for a relaxing overall experience. Alternatively, the simplistic nature of the game makes it a great choice for those who like to mute a game’s audio all the way down and listen to their own music. 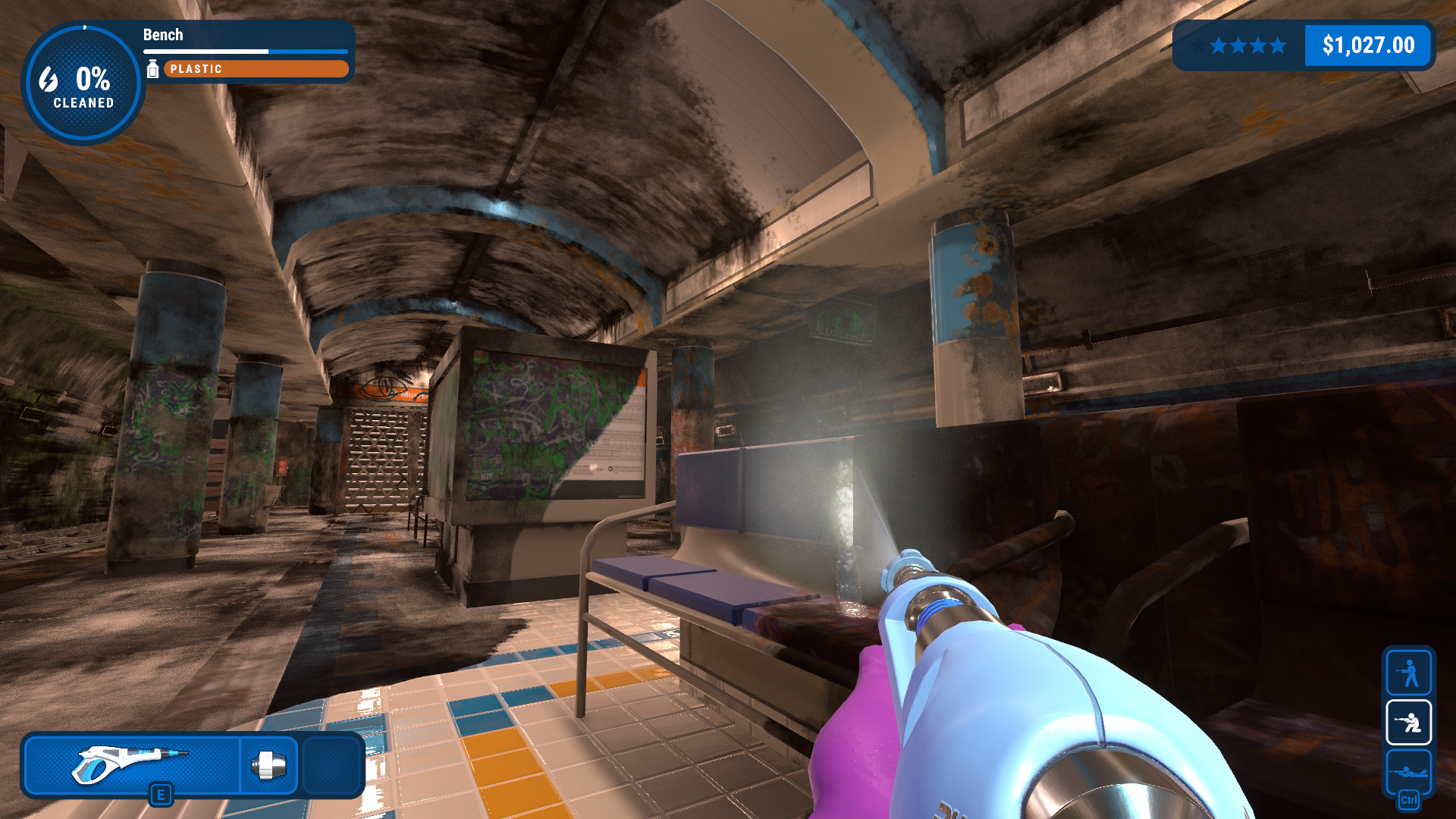 The game sports four different game modes: Career, Free Play, Challenge, and Specials. Career is where most people will start, because almost all of the game’s levels are unlocked in the other modes by first playing them in Career Mode. From there, you can replay them for more money in Free Play, which lets you play them at the same leisurely pace that you can in Career, just without message chatter, and in Challenge Mode, where you are tasked with completing the level either in a specific amount of time or by only using a certain amount of water. Specials is the exception; here, you can play unique levels right out of the gate, including a Mars rover and a massive gnome-themed fountain.

While the Specials take the prize for the quirkiest levels, the Career mode tosses in a few oddballs as well. While most of the levels require you to clean various commonplace vehicles and structures, such as cars and houses, you do get a few surprises along the way, such as a couple of carnival rides and a boot-shaped house inspired by the classic fairy tale “There was an Old Lady Who Lived in a Shoe.” The developers clearly had fun coming up with creative objects to cover with filth, and that playfulness colors the whole experience to create a lighthearted, easy-going atmosphere that’s great for when you want to just kick back and relax with some low-stress gameplay.

Furthermore, you can enjoy the game with friends in coop play. Career lets you partner up with one other person, while Free Play and Specials allows groups of up to a whopping six people to all tackle a job at once. The only mode that requires you to fly solo is Challenge, which makes sense given its additional gameplay restraints aimed at online leaderboard competition. 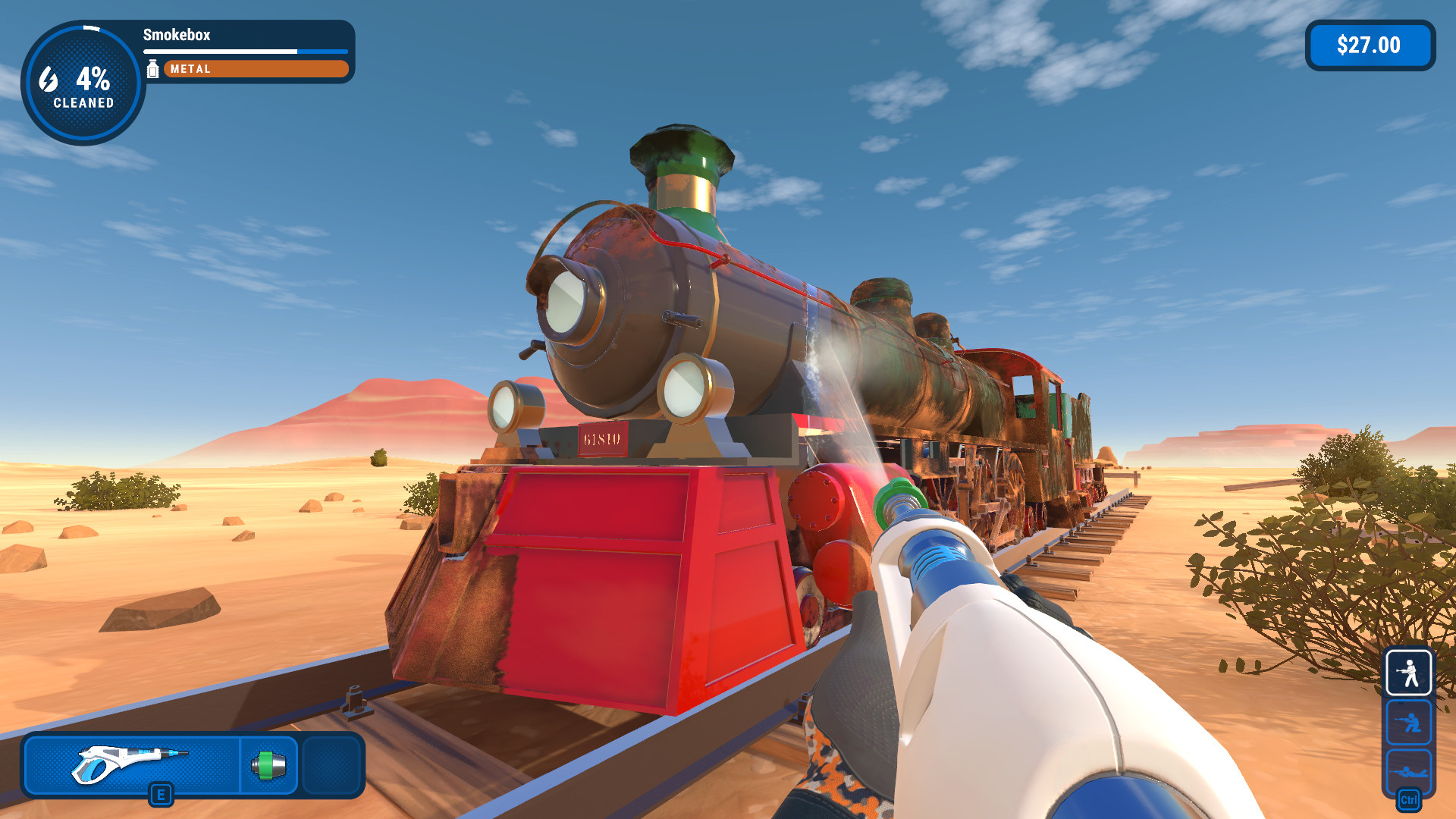 For all that this game gets right, it contains a couple of noteworthy flaws as well. One small complaint relates to the lack of other interactable objects in the environment. The areas in which you work contain plenty of objects that, in real life, would normally be affected by the force of a power washer; it would have been fun to knock tools off of the shelves in my garage, for example, or to use the washer to interact with stalls at the circus where I was hired to wash down a carousel. There are, in fact, one or two items that you can knock around with your washer, usually either a soccer ball or a garden gnome (the latter of which can be found in some comically out-of-place locations). But this only highlights the larger missed opportunity. One gnome or one soccer ball wasn’t enough to even distract me, let alone allow me to engage in any sort of creative wacky hijinks.

The bigger issue is that, as the game progresses, the environments you need to clean sometimes become too big for one player to finish in any reasonable amount of time. Equipping the most powerful sprayer (once you can afford it) helps, of course, but it can’t hit any wider of an area at any given moment than any other sprayer. Using the soap dispenser to clean off large areas as quickly as possible becomes a necessity, as these bigger jobs can take well over an hour to complete; however, spending money on soap means that it will take longer to save up the money needed to buy equipment upgrades, and I definitely felt the need to start using larger quantities of soap before I had gotten the most powerful washer, let alone the upgrades for it, as each washer uses its own extensions and soap dispenser that must be purchased separately from the others. As such, in its later stages, PowerWash Simulator becomes more fun to play with friends than alone, not only because of the joy that comes with cooperative play in general, but also because attempting them by yourself simply takes too long, counteracting the otherwise stellar system of frequent incentives and rewards. 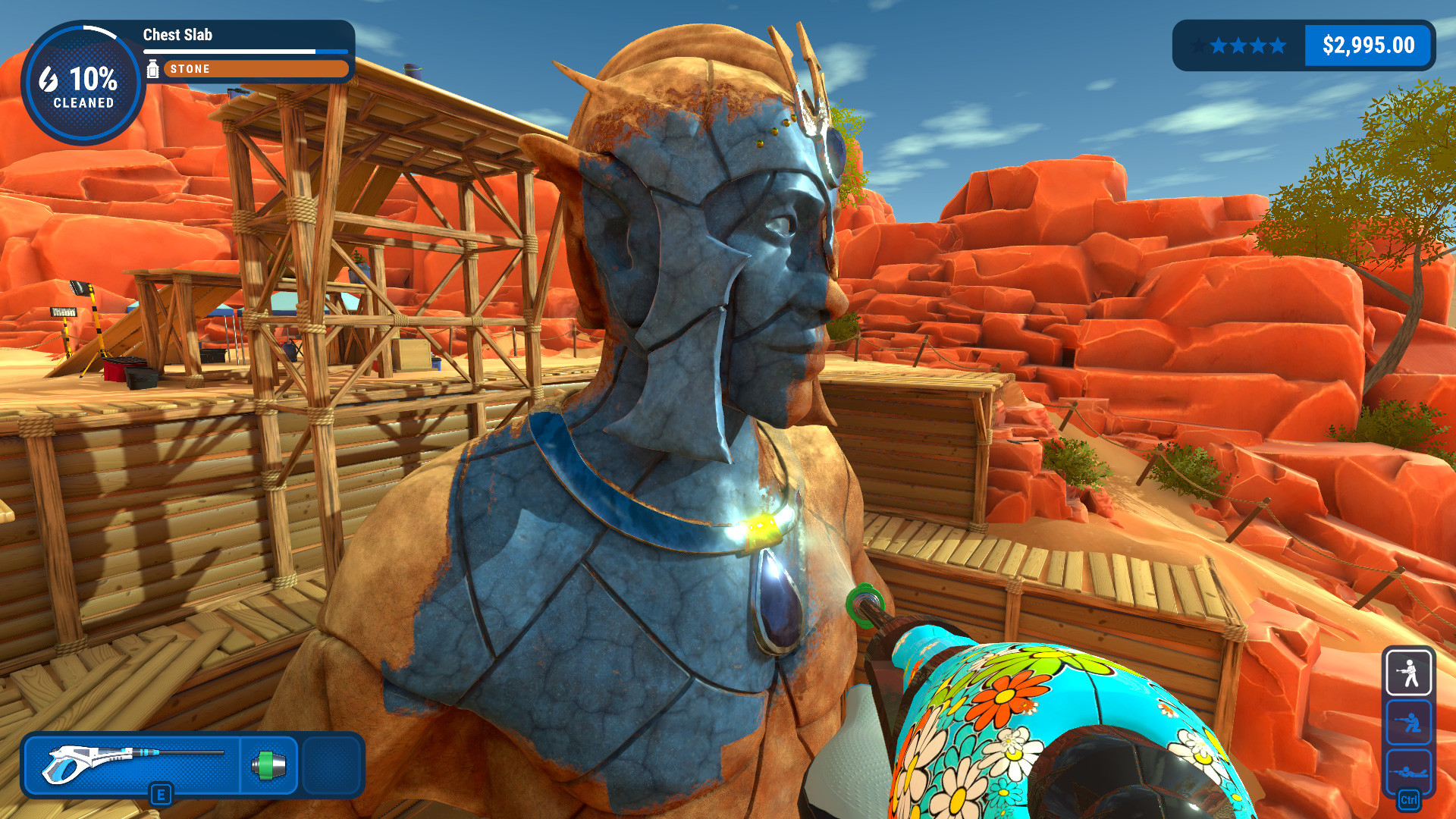 Despite these issues, I’ve still enjoyed my time with PowerWash Simulator. It may be far simpler than most other games out there, but that proves far more of a positive than a negative. If you’re looking for a relaxing game to play as you unwind after a long day, or a simple game that you can enjoy with friends or even young kids, PowerWash Simulator is a good choice. 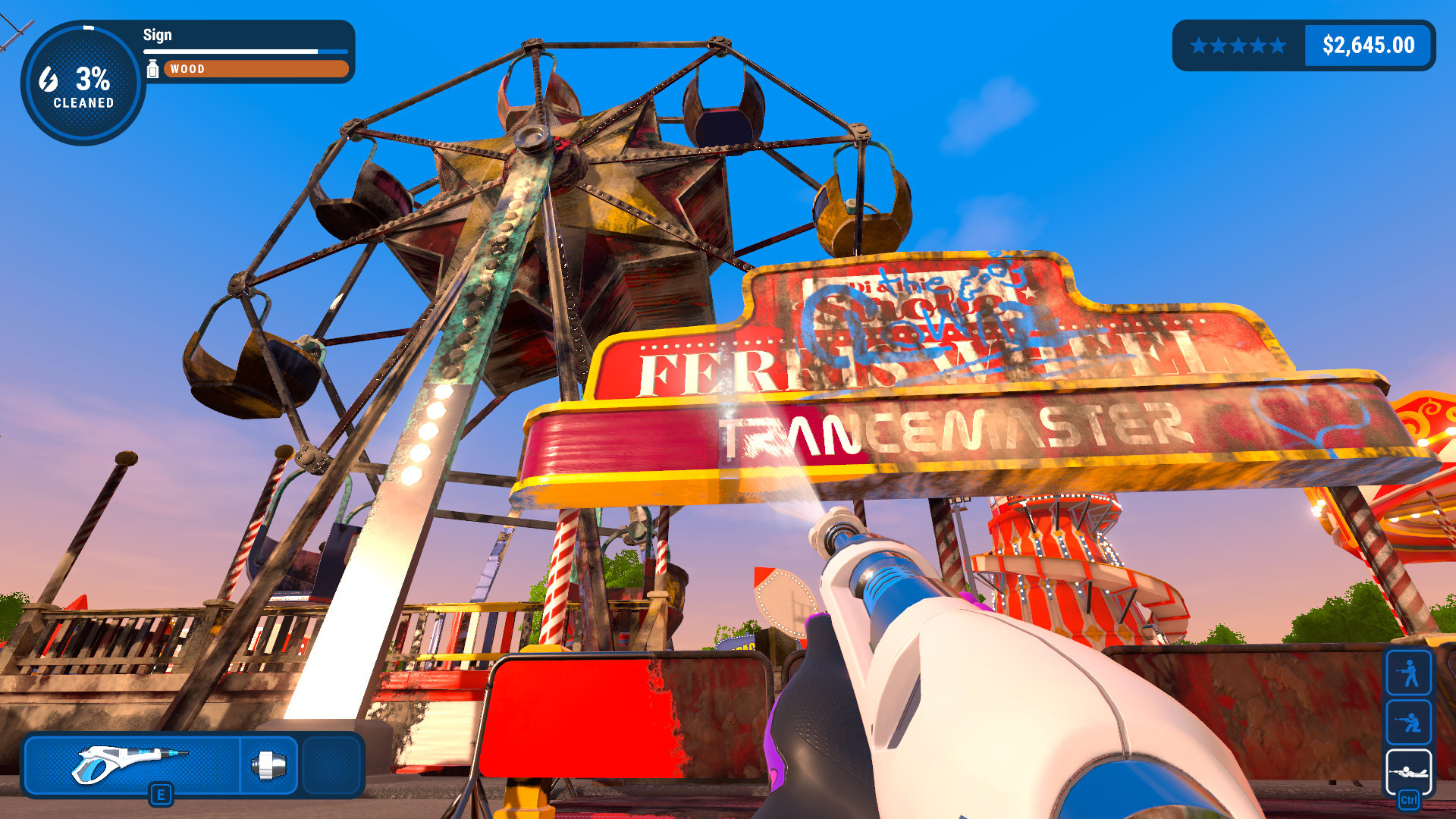