If you remember the first Ni no Kuni game released in the US in 2013, whose Ghibli animation and childlike story charmed players, then you have most assuredly been anticipating the sequel. Ni No Kuni 2: Revenant Kingdom has been in development for years and experienced delay for a number months too. Now finally, it launched on March 23, 2018. The question now is whether it was worth the wait. To a fan like me, the answer is absolutely! No PS4? No worries: it is available on PC as well.

The Revenant Kingdom is a world that values friendship, loyalty, honesty, braveness, wisdom, strategic planning, and happiness, in addition to helping each other from individual to national levels. Here, the heroes win the hearts and battles. This realm is also full of creatures, monsters, and magical powers. With more power comes more responsibility.

In Ni No Kuni: Wrath of the White Witch, you play as a boy named Oliver who enters the Ding Dong Dell magical kingdom to save his mother. In Ni No Kuni 2: Revenant Kingdom, you are a boy prince of the Ding Dong Dell cat kingdom, and your mission is to build a kingdom that makes everyone live happy ever after. You have different characters to play within your party, and you can switch to them any time depending on your play style. Without spoiling the storyline, I only can say that both Ni No Kuni games share the similarity of  a heavily-involved emotional beginning, and those feelings should motivate your journey ahead with purpose.

On this journey to build your own kingdom, you will collect your party members in the early part of the game, in contrast with Wrath of the White Witch where one member in particular didn’t join until almost the end game. Even though their personal background stories are lacking in some areas, you will appreciate having what feels like close friends running around and fighting against monsters along side you. This is a JRPG, so they all have multiple abilities and equipment. You have to keep an eye on what you loot so that you can make sure you are equipping the best suited items for each character. While leveling up, your party members will get stronger with increased HP, MP, and abilities. You will also collect different cute creature called Higgledies. They come with vibrant colors and various personalities too. Plus, Kingmaker Lofty, who takes over Drippy’s role as the comic relief, is a character that helps make the whole group feel full of life. 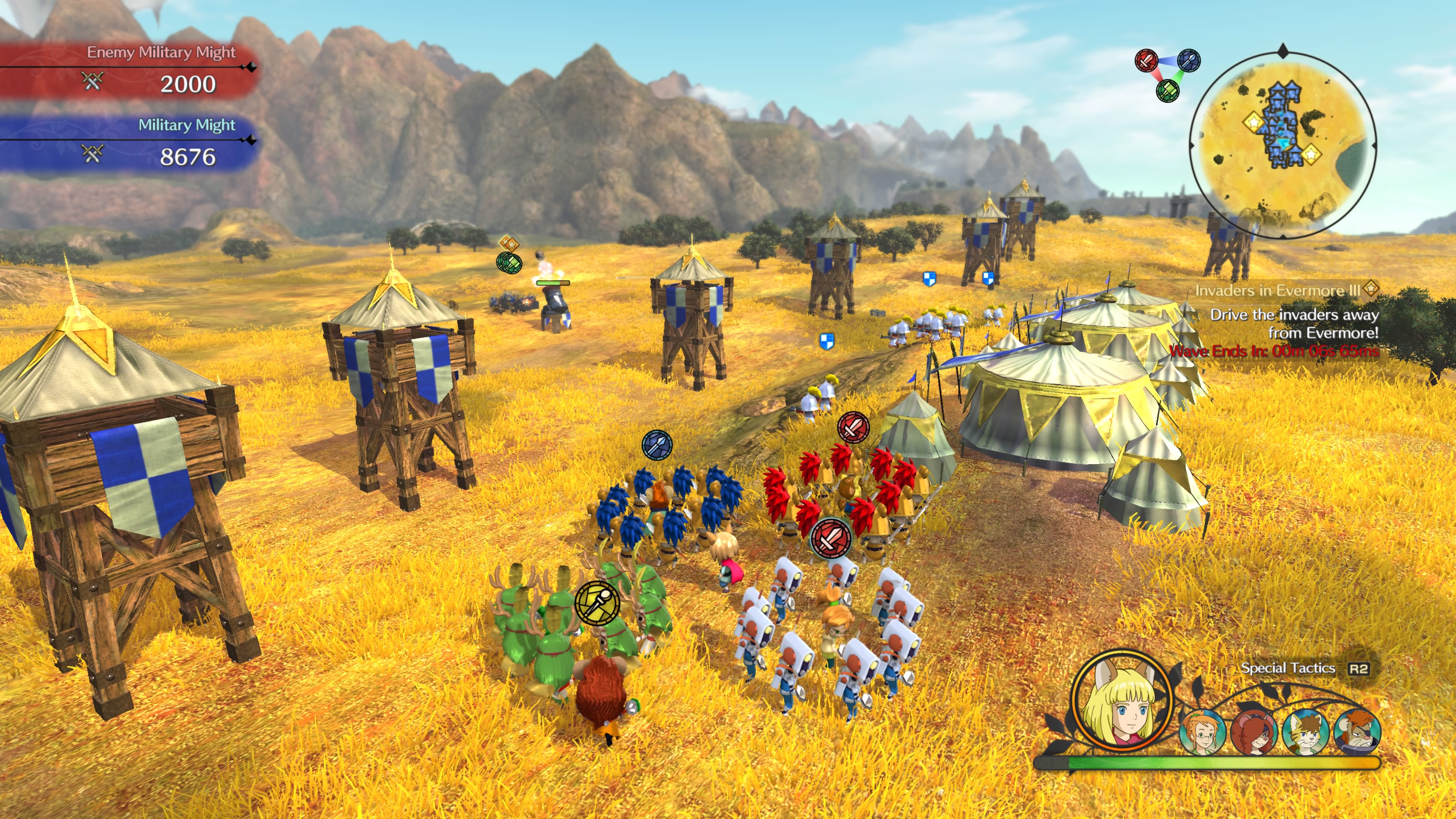 The combat system is completely overhauled. The first Ni No Kuni uses a turn-based Pokémon-style battle system, while Ni No Kuni 2 adopts the popular real-time party combat dynamic. You can use melee, ranged, and magic abilities fighting along side your party members, which sounds a lot like Final Fantasy XV. The combat effects are flashy and beautiful to watch. Victory is not hard to achieve at all, but make sure to practice a lot as boss fights will be punishing if you are not ready.

Diversity is another interesting thing in Ni No Kuni 2: Revenant Kingdom. You will solve puzzles like The Legend of Zelda: Breath of the Wild; you will conduct skirmish army battles like the Total War series; you will also run around as a cute chibi characters like the World of Final Fantasy. It reminded me so many other games during my playtime. Of course, the most important part is the music soundtrack and the art style of both characters and environment. It is a pure joy to just admire the beauty of anime and the sheer feeling of awesomeness in each musical piece. If you have seen all the Miyazaki movies, then I am sure that this game will recall some great memories of your favorite ones. I appreciate the integration of both very much. 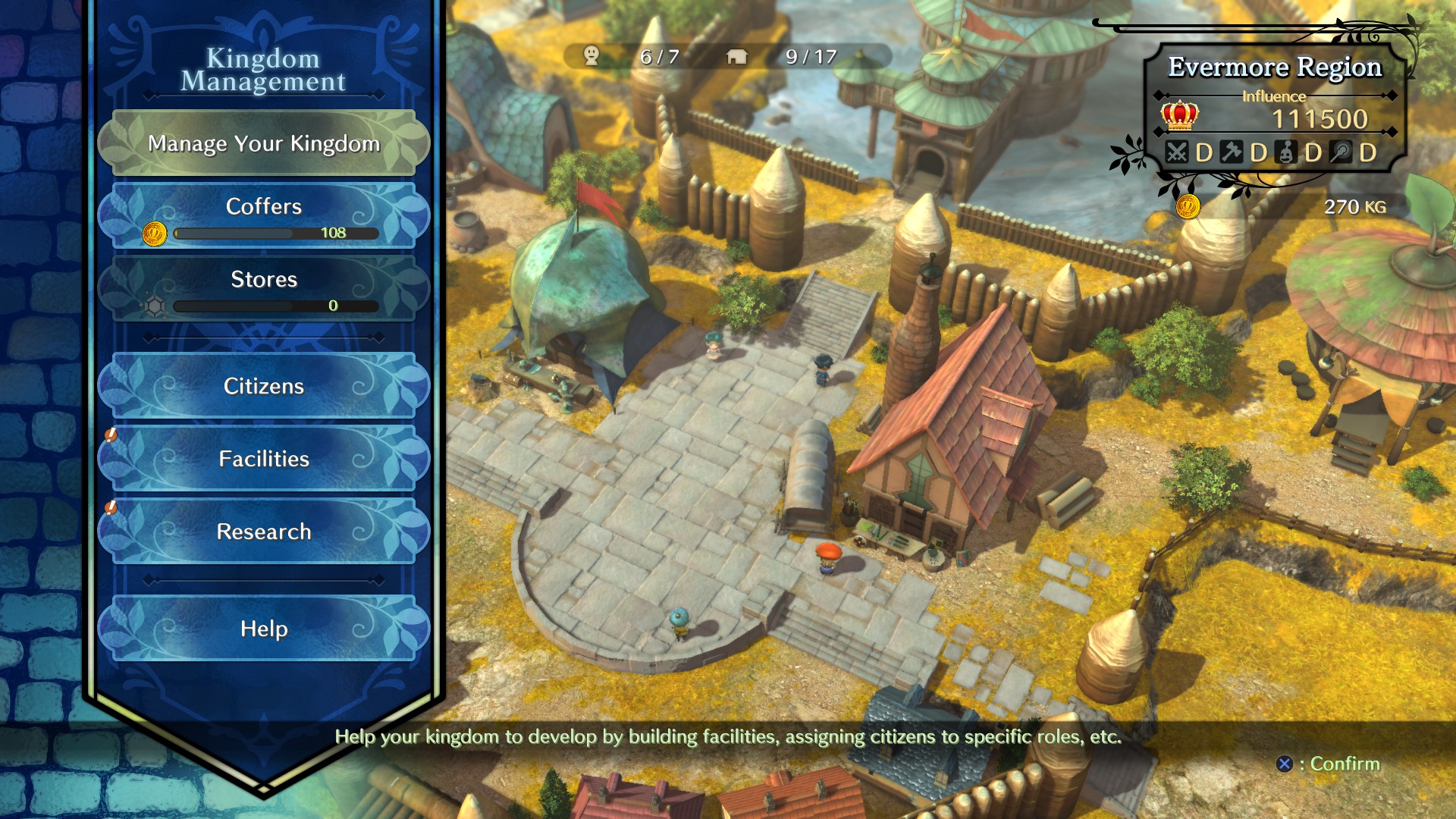 Ni No Kuni 2 wants you to build a kingdom, and it does deliver the feeling for players by adding the construction elements. If you have built a garrison in World of Warcraft, you will have a general idea of what it looks like. However, Ni No Kuni 2 requires you to put the best suitable people to manage your buildings like in the Tropico series. This produces a great release of satisfaction when you finally find the best fits for the differing positions. You will encounter over 100 citizen characters within the game, and you can recruit them into your management teams. You can also create or upgrade weapons, clothing, magic abilities, and Higgledies companies at your buildings if you so desire. Nothing is greater than visually seeing your boy prince rising from being naive and weak with nothing to someone wise and strong at the end.

The game runs smoothly and I haven’t had any experience of bugs yet. However, I do wish that the developer would add more voiced lines throughout the game. That is also why I will say that Ni No Kuni 2 is not a game for everyone as you will have to read a lot of text dialogues. When I say “a lot,” I really mean that reading non-voiced conversations occupies a large portion of game time. Many may find this boring or unbearable because of it. It is a JRPG after all, so it may not appeal to those who get used to all-voiced games. The story itself is not the most deep or memorable epic adventure ever, but rather a silly and light-hearted childlike journey with friends. I have moments asking why and how the story plots come together, but at the end of the day I have to laugh about it and then move on. Ni No Kuni 2: Revenant Kingdom is a lighthearted game, so approach accordingly—just have some fun and relax along the way. It could be a good escape from the world of reality if you really immerse yourself into this unique fantasy land.