Adventures of Dino Riki was my first foray into the world of vertical/overhead shooting games. The backdrop for this game is far from typical. You have neither a vehicle such as a tank or a spaceship, nor do you have a firearm. Your weapons here are stones, axes, boomerangs, and fireballs, and your “vehicle” is a young caveman warrior named Dino-Riki.

There really isn’t much of a story in Adventures of Dino Riki. Essentially, a strong and courageous Neanderthal named Dino-Riki sets off to defeat a number of large and nasty creatures to ensure the future and safety of his people. Fun Fact: The inspiration for the Dino-Riki character came from Riki Chōshū, a Japanese professional wrestler. In fact, the Macho-Riki sprite was designed to resemble him. 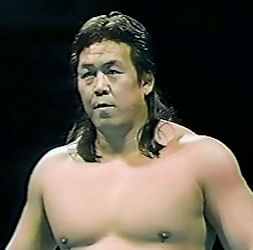 Not for the faint of heart. That’s why Macho-Riki is here!

There is some old-school, pixelated, fantasy violence, but the game is appropriate for all ages.

Those overgrown pebbles won’t cut it for very long. Hunt for power-ups!

In standard shooter fashion, the screen will move by itself and you must keep pace to avoid being pushed into pits or smushed behind obstacles. You start out with stones as your only means of defense, which have poor attack damage and short range. Soon, however, you’ll find upgrades in the form of fist tiles that will give you better weapons. Axes have much greater range, but can only be fired in a straight line. Boomerangs are even stronger than axes, and have terrific range, but their trajectory is unpredictable and can be difficult to aim at a single target. Supreme among the standard weapons are the fireballs, which have a cone-shaped spread that covers most of the screen, fantastic damage, and a high rate of fire. Finally, you may have the opportunity to transform into Macho-Riki, a super-buff fighter capable of blasting enemies with fast-moving clone-projections of himself. His strength allows him to take a hit without losing any health, but if this happens he’s downgraded back to Dino-Riki and armed with only stones again. So, tread carefully.

Jumps like these must be timed carefully, or the rug will literally be pulled out from under you.

Scattered about the landscape are other items, such as a speed boost that allows Dino-Riki to zoom across the screen. Hearts will increase Dino-Riki’s maximum health, in very similar fashion to The Legend of Zelda. Wings let Dino-Riki fly for a short period of time, allowing him to avoid pits and certain other environmental hazards. If you unearth a star tile, picking it up will annihilate all the enemies on the screen. Diamonds will increase your score. Meat–of course–will restore some of your health.

Over the course of seven levels, you will run, jump, dodge, and fight your way to victory. Enemies will come from nearly every direction. Frequently, you will encounter areas where you will have to jump over pits or water, including wide rivers that feature disappearing/reappearing lily pads. There are other things to watch for as well, including fire-spitting dinosaurs, quicksand, and impassable ground. Fortunately, for all the fast-paced and grueling action of the stages, the bosses are comparatively easy. They attack in predictable patterns, and the fights take place on a single, non-moving screen.

Do you give up your fireballs to become Macho-Riki? Decisions, decisions!

If you can get your eyes away from the action long enough, you will be able to take note of the environments. The palettes are not the most imaginative or diverse, but they are fairly bright and do cause the screen to pop. There are jungle, desert, and swamp levels, which are all fairly reflective of a prehistoric environment, but some players may be disappointed at the lack of differentiation in the Stage 4 levels.

The music has that classic retro feel and represents the 8-bit musical genre very well. As you progress through the stages, the mood of the music gradually shifts from upbeat, to frantic, to dread-inducing. The boss music likewise invokes a slight feeling of panic.

Perhaps the most disappointing aspect of this game is the lack of a proper ending. While it stands to reason that a game without a real story probably wouldn’t have a real ending, the player is simply whisked back to Stage 1 after defeating the final boss. Some players could accept this if there were at least something as simple as one congratulatory screen describing in short detail the aftermath of your victory. Alas, this is not so. It is more reminiscent of Arkista’s Ring; however, you do actually get an ending after playing through the game four times, with the difficulty increasing each playthrough.

Hailing from an age where many NES enthusiasts discuss Mega Man and Ninja Gaiden in terms of classic 8-bit difficulty, The Adventures of Dino Riki, while lesser-known, is no more forgiving. It’s a challenging game and definitely not for everyone. However, I strongly urge you find a copy of this diamond in the rough and play it. I beat this game as a child of 9. You can do it!

To avoid getting eaten: Hold the fire button and keep moving!

Live to game; game to live. Nominal Christian from birth; practicing Christian since 2002. I love to talk all things gaming, from console classics to Dungeons & Dragons.