The Rat Pack Strikes Back

French developer Asobo Studio is back with A Plague Tale: Requiem, a sequel to their 2019 title A Plague Tale: Innocence. Once again, we dive into the shoes of Amicia de Rune, a young woman in medieval France looking after her cursed brother, Hugo, whose power over plague-infested rats threatens the lives of everyone around them. The first game delighted with its gorgeous visuals, compelling story, and solid mix of stealth action and puzzle solving. Can Requiem build on the strengths of its predecessor? 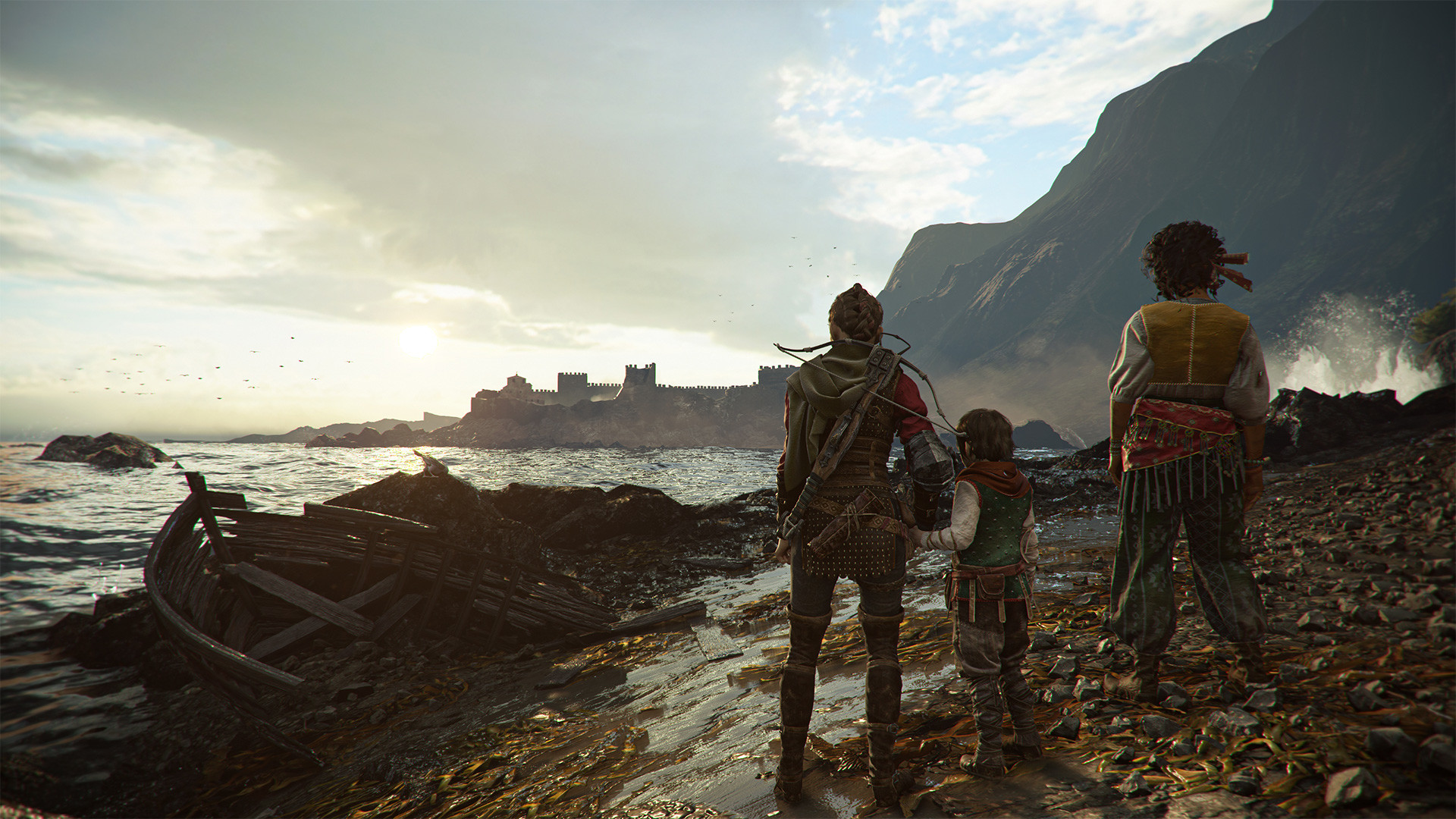 Violence: Violence and death are prevalent throughout the game. Characters killed with all manner of medieval weaponry, from arrows and bolts to knives and axes. While some gameplay sequences allow (or require) you to pass through an area without killing anyone, others require carnage. And, of course, the series’ iconic swarms of rats are always hungry and waiting to devour any unfortunate soul that they can get their teeth on.

Unsurprisingly, then, Requiem contains copious amounts of human corpses, from the skeletons of those long dead to the freshly deceased bodies of those who were diseased or munched on by rats. A few animal entrails make an appearance as well. The game isn’t shy about getting your character up close to these corpses, either, and Amicia and her compatriots express their unease in such situations. If you’re uncomfortable seeing lots of blood and dead bodies, you’ll likely have a very difficult time making it through this game. 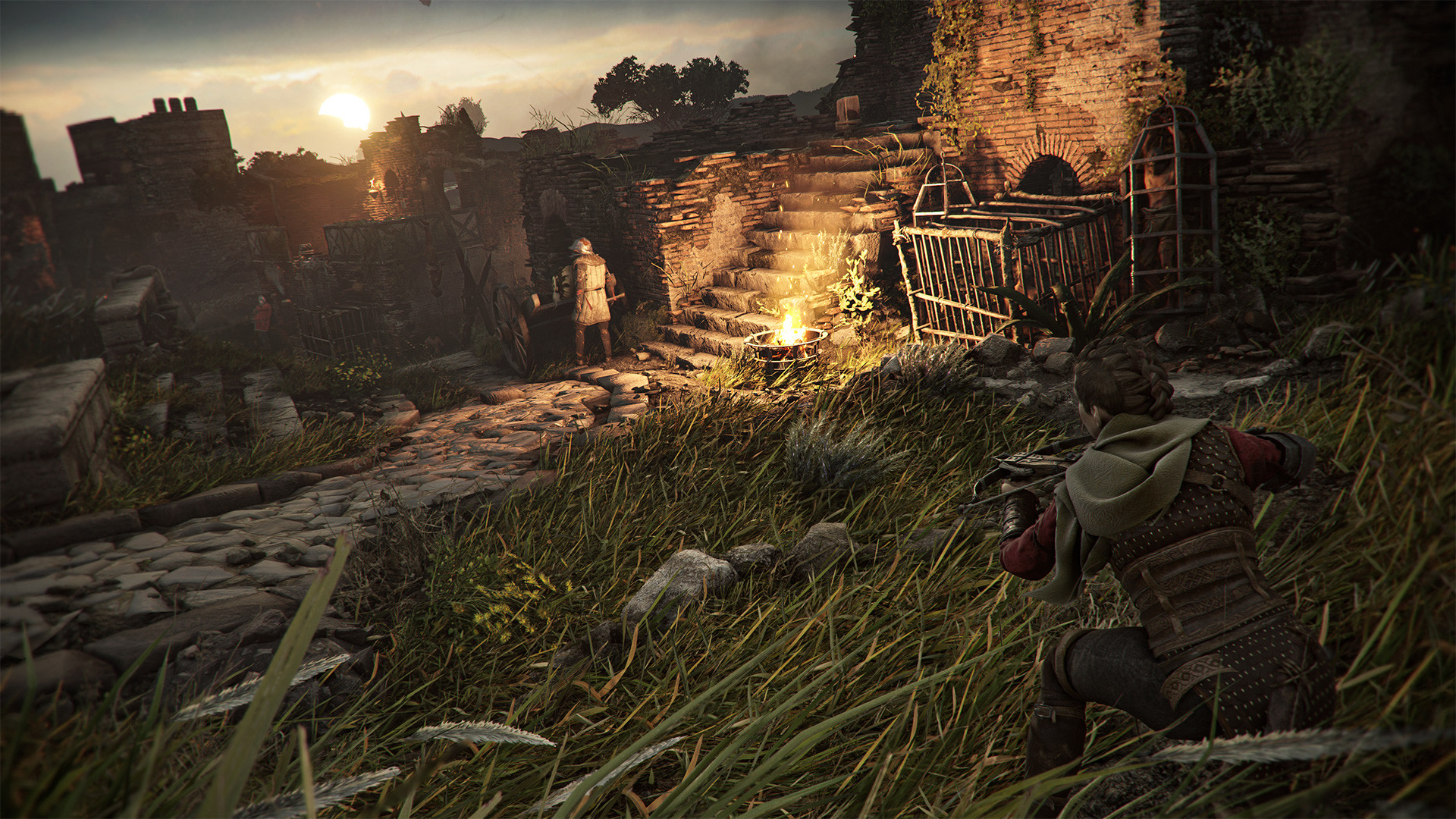 Language: Foul language isn’t used often in this game, but you will occasionally hear characters utter “f**k,” “sh*t,” and other such terms.

Sexual Content: Requiem is free of any objectionable sexual content. The characters never make any sexual innuendos or wear any unusually tight or revealing clothing.

Spiritual Themes: Amicia says “Lord” a number of times throughout the game, sometimes as an exclamation in the face of something terrible or shocking, and other times as an actual cry to God. One character describes how she was sent to a convent as a girl to make up for her father’s sin of smuggling, only for her to later become a smuggler herself and declare that she prefers to be “a sinner and free.” The game also contains a cult, and the characters remark that this group’s beliefs would run afoul of the church.

Positive Themes: The bonds of love between the game’s heroes is frequently celebrated, especially the familial love between Hugo and Amicia, which rests at the heart of the story. 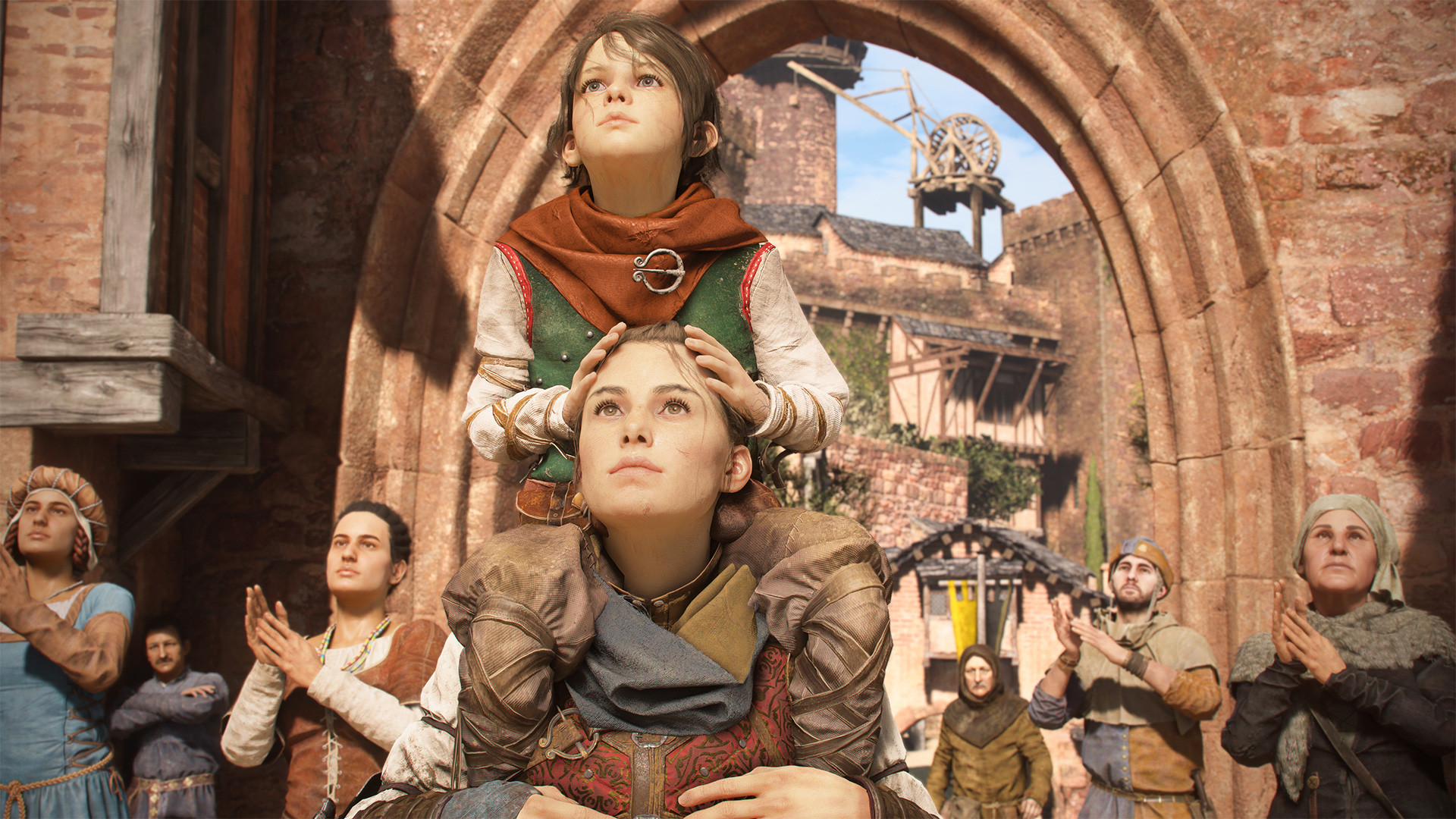 The story picks up a few months after the end of the first game. Hugo, Amicia, their mother Beatrice, and their alchemist friend Lucas have been enjoying a bit of peace together, and they find a nice town that they hope could become their new home. However, their underlying problems—that is, the Macula curse flowing through Hugo’s blood just underneath the surface of his skin, and the endless hordes of plague-infested rats bursting up from underground—rear their ugly heads once again. Hugo’s limited ability to control the hordes of rats hasn’t given him the ability to make them go away; the plague continues to spread, and Hugo’s own mood swings can cause the rats appear in even greater numbers. At the same time, Hugo is having a recurring dream of an island, a bird, and a pool of water that he believes may be able to heal him. Could this be the solution that they’ve been searching for? 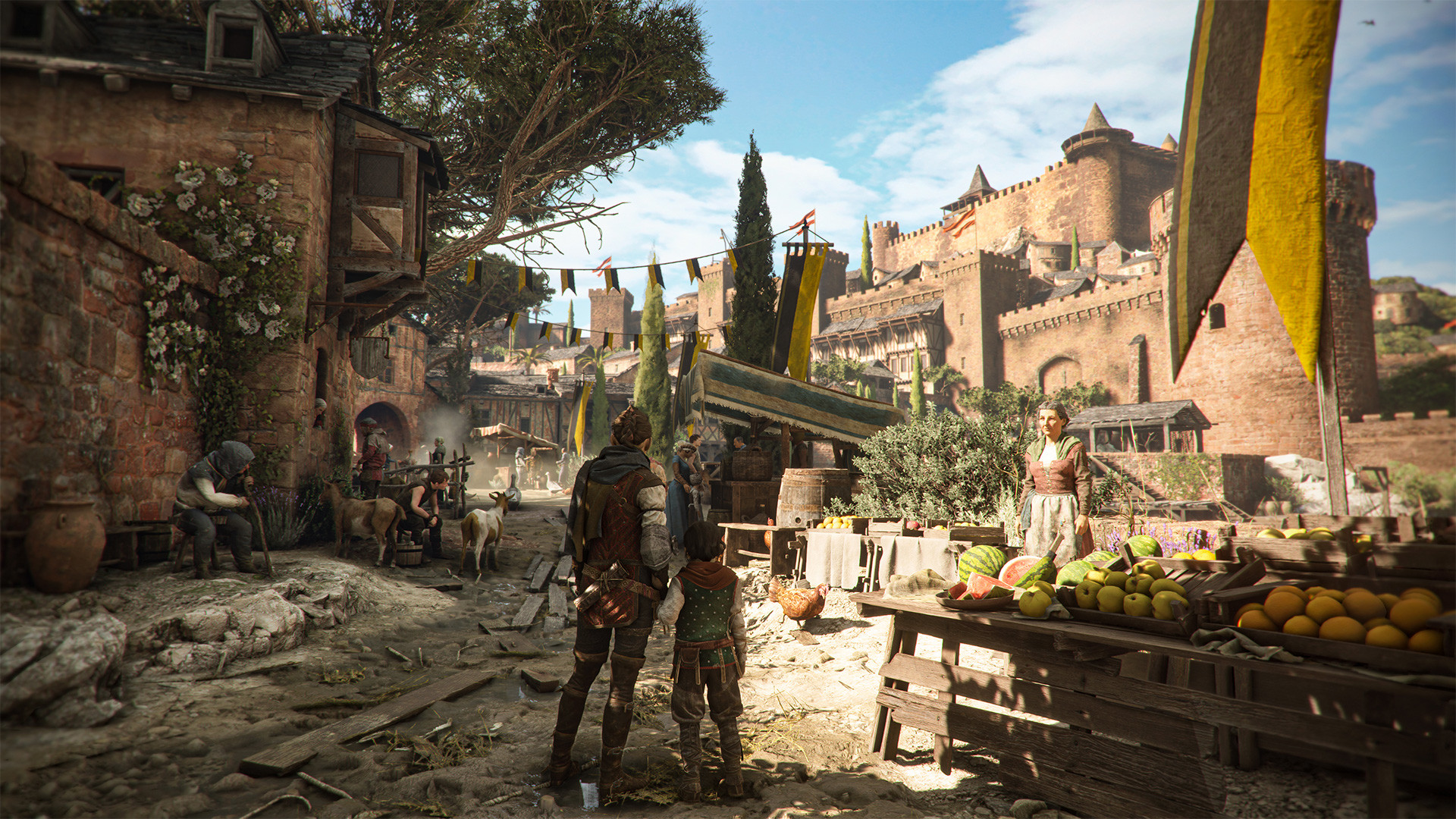 Requiem’s narrative is well told overall, with a handful of twists, turns, and dramatic story beats, including its emotional finale. Hugo and Amicia form the backbone of the story; much love and care went into crafting the relational bond between the two of them. I also enjoyed seeing how the other characters, especially a couple of new ones introduced partway through the game, interact with the main duo, responding to Amicia’s straightforward demeanor and Hugo’s childlike innocence. What stands out the most, however, is the voice acting. All the actors deliver phenomenal performances, especially Charlotte McBurney as Amicia, who deftly expresses an incredibly wide range of emotions, from joy, to anger, to deep sorrow and anguish. It is these performances that truly sell Requiem’s story and characters, especially as the story approaches its stirring finale. 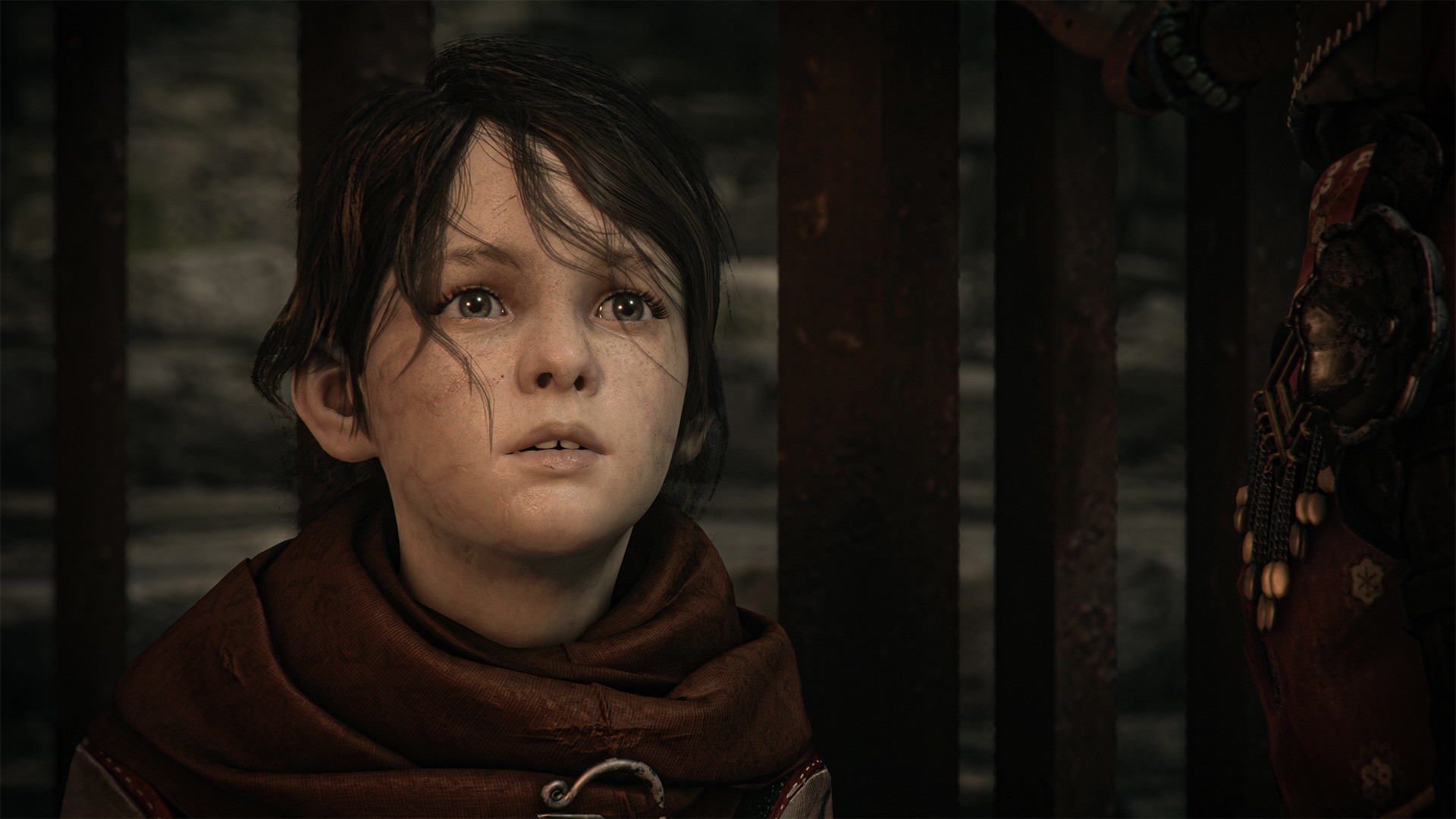 While the game’s story is perhaps its greatest strength, it’s not quite flawless (I delve into MINOR SPOILERS here, in case you would like to skip ahead in this review). At a few points in the game, friendly characters remark on how killing their adversaries, rather than avoiding them, will only lead to more hardship. Amicia is even chastised after one segment in which, for the purpose of the story, she goes on a rampage, and you as the player are required to kill a whole bunch of soldiers. However, by the end of the story, this concept is largely forgotten; there are multiple other occasions in which you are required to kill in order to keep your loved ones safe, and the protests from your allies gradually fade. The concept feels half-baked and should have been left on the cutting room floor. Fortunately, this isn’t such a prevalent issue as to derail the narrative as a whole, which leans much more heavily into the game’s endearing cast. 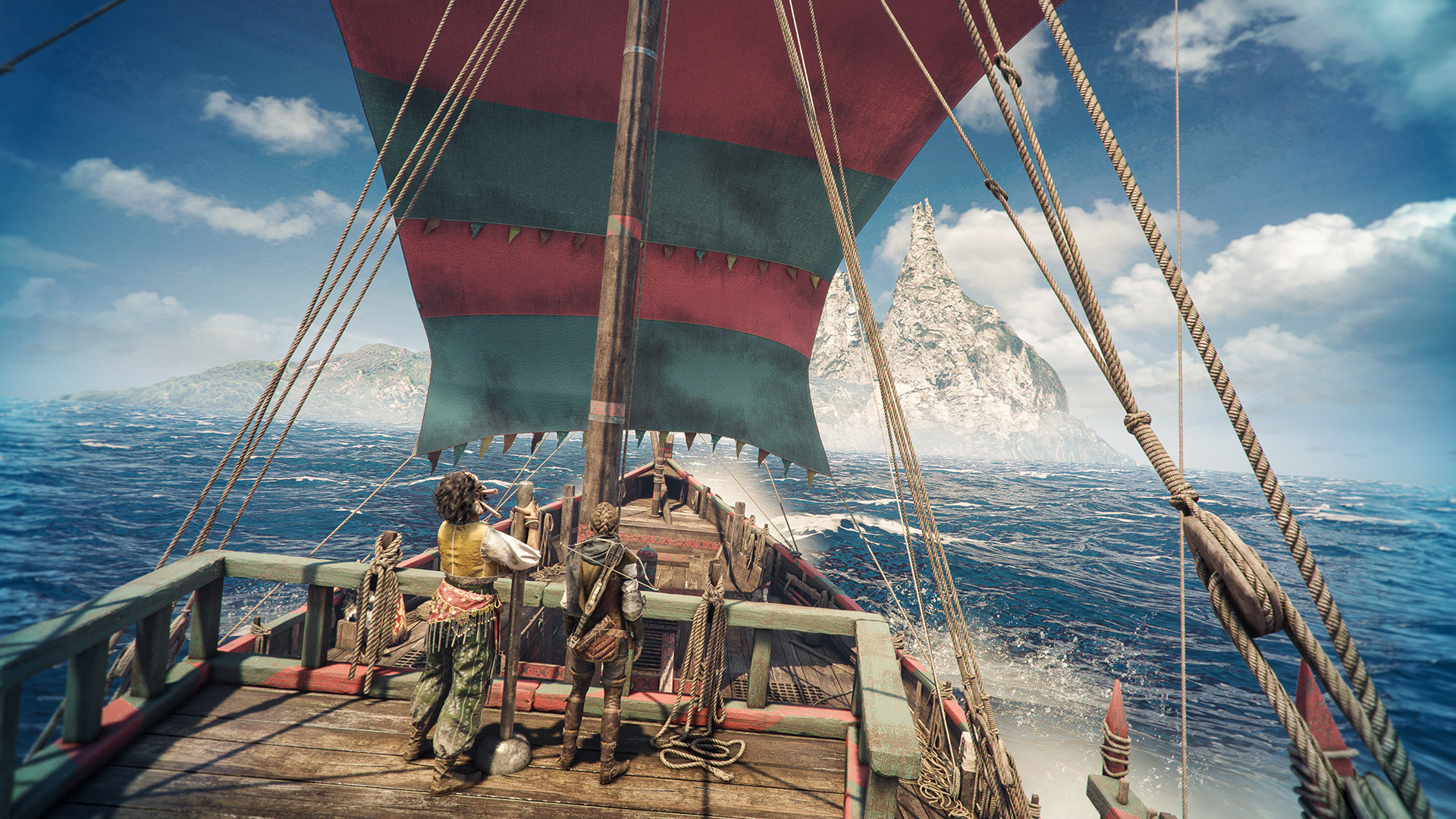 The team at Asobo have truly outdone themselves with Requiem’s audio/visual presentation, giving us one of the best early showcases of what these latest consoles are capable of. The environments burst with detail, the sounds of people and animals fill the air in busy markets, and the lighting—of chief importance in a game that directly utilizes light and darkness in its gameplay—is top notch. Requiem also improves upon one of its predecessor’s weaknesses: the facial animation. The wooden, lifeless faces of Innocence have been replaced with far more expressive models that no longer hamper the storytelling. There’s still room for improvement here, but Asobo has come a long way in this regard.

The soundtrack also deserves a special mention, making particularly excellent use of stringed instruments and the vocal talents of the Estonian Philharmonic Chamber Choir. The contemplative “Brother” and dramatic “No Turning Back” are two of my favorite tracks.

Requiem’s gameplay largely mirrors that of Innocence, with a few slight changes which improve the overall experience. Once again, you split your time between stealth-action combat and simple environmental puzzle solving. In combat, Amicia is at a physical disadvantage to her taller, buffer, and frequently armored adversaries, and she can only take one or two hits in close succession before dying. As such, your best strategy is typically to stay low, hiding behind cover and in tall grass, striking enemies with the element of surprise or sneaking past them entirely. However, you have a wide range of tools at your disposal that let you tailor your approach to your liking, helping keep the encounters fresh and giving you the freedom to take whatever approach suits your fancy. Your sling remains your primary weapon, letting you kill enemies David-and-Goliath style with a swift stone to the head, made even more convenient in that you now carry an endless supply of stones at all times. The alchemical ammunition you craft serves a vital purpose in both combat and puzzle solving; your ability to light, enhance, and extinguish flames lets you manipulate the light-averse rats to your advantage, clearing pathways for safe passage or serving your foes up on a silver platter. You also gain access to a crossbow and knives, but these play a much more limited role in combat. The crossbow, for one, can only be used if you have bolts on hand, and you don’t find many of these laying around. Knives, on the other hand, let you kill enemies quickly and quietly at close quarters, but they’re immediately consumed, and ultimately more useful in opening the locks you find on some workbenches, where you can upgrade your equipment. 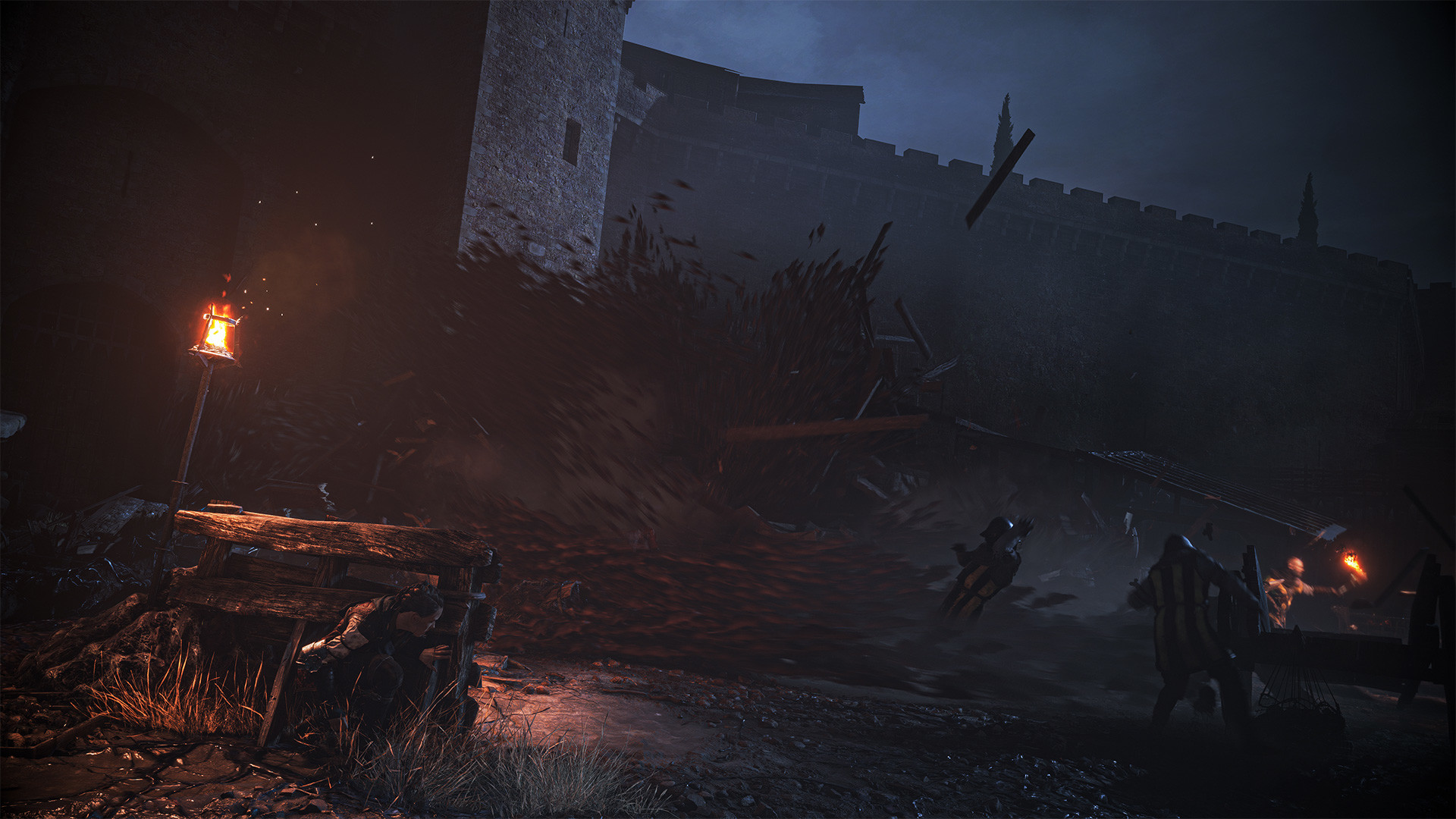 Speaking of which, Requiem features two forms of upgrades: one for your equipment and one for your skills. The equipment upgrades work in the same way as they do in Innocence, requiring you to spend a combination of tools and pieces to improve your gear in various ways, such as increasing the amount of alchemical resources you can carry, and reducing the noise made by twirling your sling. Your skills, meanwhile, provide passive improvements to your abilities, and are divided into three categories: Prudence, Aggressive, and Opportunism. How you deal with enemies will move you along a scale in these categories and closer to a related upgrade. So, for example, if you tend to sneak past enemies without harming them or catching their attention, you will move along the Prudence scale and eventually learn abilities to make you quieter and swifter while crouching; if you prefer to take the fight to the enemy more directly, you’ll either gain Aggressive abilities like pushing enemies into groups of rats, or Opportunistic abilities that improve your alchemical crafting. In short, the game rewards you by enhancing the playstyle you naturally gravitate toward, which is an excellent design choice.

All told, Asobo has delivered a beautiful follow-up to their 2019 hit. With its compelling cast and refined stealth gameplay, Requiem builds on the narrative and mechanical foundation laid by Innocence, and while I can’t go into much detail, I’m intrigued by how the series is set up for future entries. I can’t wait to see what the team has in store next. 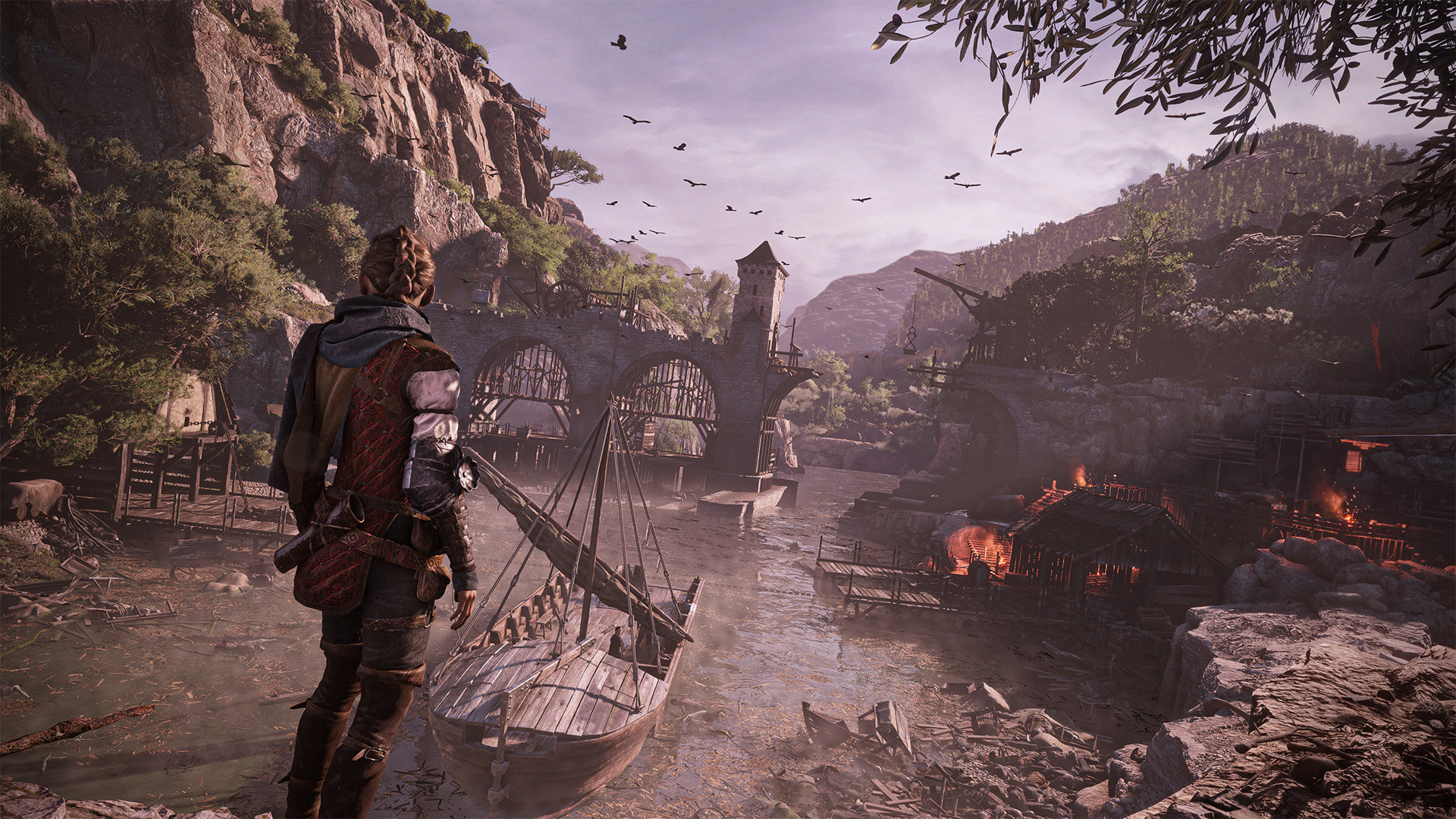 A Plague Tale Requiem successfully refines the gameplay of its predecessor while delivering top-notch visuals and a powerful, character-driven story.