If you are a proponent of videogames, and their supposedly dwindling creativity (or fun), I suggest you turn a blind eye to Besiege, for it will make you question that stance.  If there were ever any games like it, they certainly didn’t succeed in being as entertaining or downright rapturous as this one has proven to be.  Though Besiege might still be in its early stages, it doesn’t feel as such.  The concepts and dynamics, while still awaiting some minor tweaks, are very mature and promote innovation and creativity in the mind of the player.

Functioning over a physics-based engine, Besiege provides you an in-game space with which to utilize various tools for creating a siege weapon that can complete each stage’s goal.  Sometimes the objective is simply to move from point A to point B, while others require you to destroy armies, break down walls, move large objects, or otherwise.  Each of these tasks can be accomplished in a variety of ways, and they are really only limited by the player’s own ingenuity and how they devise their creation.  The individual items available for building your weapon are diverse, not only in type, but also in specific properties, and sometimes you’ll accidentally learn a new way to engineer the physics system to your advantage.

It should put on the record that this is not the sort of game I’m naturally inclined to play.  I lack both the constructive inventiveness and spatial awareness to be capable of truly masterful designs.  After my initial taste of the game, I eventually found myself turning toward the internet for hints and tricks about how to build things.  While there is a tutorial, it’s thin, and doesn’t give you many specific details on how to use each tool.  This can lead to some frustration right out the gate as the player works to climb the steep learning curve.  But the rewards are great, and before long the player is mesmerized by the possibilities presented within the game, and even accepting of their failed attempts.  Why?  Because failed attempts usually involve hysterical problems ensuing, like accidentally making a trebuchet that shoots itself into the air and explodes, or not bracing your constructs appropriately so the entire build is ripped apart by some sheep.

Which leads to a mild content warning for those of you who are interested.  There’s some blood when you kill sheep and soldiers, all of which can be disposed of in a large number of ways.  They can be burned, crushed, skewered, sawed to pieces, or some combination of all these macabre fates.  Nevertheless, the cartoon style doesn’t make it feel morbid.  Though if you have the sort of mind for it, you can come up with some pretty twisted contraptions.

But that’s on you.

In sum, Besiege is a wonderful game with a splash of indie love, one you should give a spin, if only to satisfy your curiosity.  It’s still in development, so don’t expect much available content (levels), at least for the time being.  The developers are accepting all the feedback they can get in order to make their idea thrive.  Lend a hand.

God bless, build something, and always remember to smile.

VERSE OF THE DAY – Revelation 21:4
“He will wipe every tear from their eyes. There will be no more death or mourning or crying or pain, for the old order of things has passed away.”

SONG OF THE DAY – “Who Needs Air” by The Classic Crime 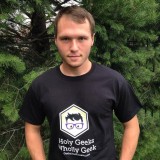 Aspiring author, marriage and family therapist, and active behavioral health technician, Cooper fills his world with God, music, videogames, anime/manga, drawing, reading, writing, and some physical stuff in between. If you ever want to talk about the big or little things of life, fire him a message. Helping others through tough times is both his passion and way of living. 'Got it memorized?'