Review: Tennis in the Face

Tennis in the Face

Play as Pete Pagassi, former tennis star, to get revenge on the Explodz energy soda company. This puzzle-based game is great for those moments when you're waiting around.

Thank goodness for this new generation of consoles. Now, games that normally would never make it to consoles are getting ports—like games that work best on phones or tablets. Tennis in the Face is a perfect example of this. This is a game that, while fun and challenging, falls a bit short on console platforms.

There isn’t much to warn about with Tennis in the Face. There is no swearing, alcohol use, or sexual themes. There is mostly cartoonish violence (characters getting hit with tennis balls, energy drinks, and garbage bags). 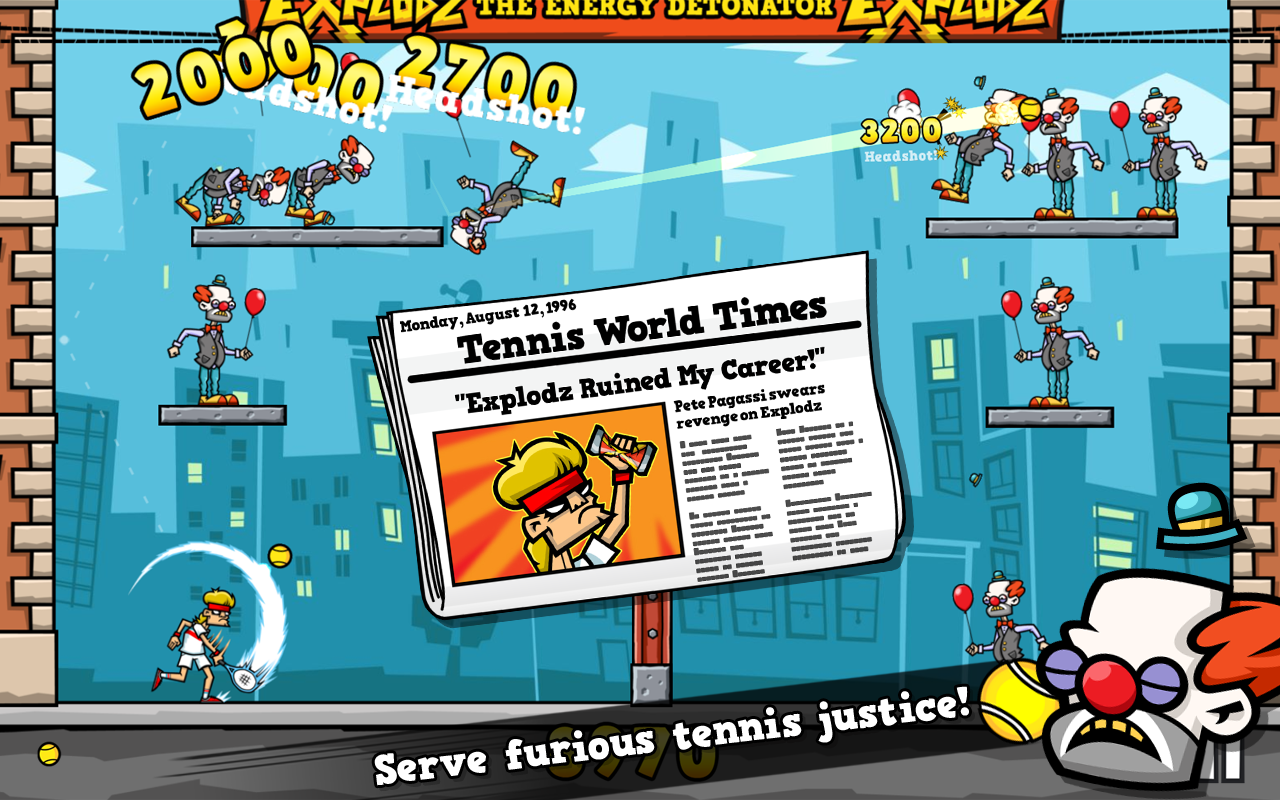 You play as an ex-tennis star whose career was destroyed by a serious addiction to Explodz energy soda. Once out of rehab you vow revenge on the company. You head through the town of Oddington, taking out anyone involved with Explodz. There are a lot of levels, each one with a different enemy. You face clowns, hipsters, PR guys, scientists, and more. Eventually, the bad guys get add-ons to challenge your skills (for example, the hipsters get shields). This increases the strategical difficulty of the game; you must come up with new ways to take out old characters. Occasionally you’ll face two types of enemies, but it rarely works to the benefit of the game. Most of the time you still have to take them out the same way.

The gameplay is similar to that of Angry Birds. Tennis in the Face is a 2D physics game where you must knock over objects and enemies. The big difference is that the tennis ball, once hit, will bounce all over the room. You get the chance to hit several enemies with one ball. You have a limited set of balls, and you get bonuses if you knock over all the enemies without using your limited set. Eventually you start hitting energy drinks, and they have a different physical reaction than the balls.

Some levels act like a Rube Goldberg machine; it’s not so much trying to hit each enemy with the fewest number of balls, but using the environment to set off a chain reaction. Eventually you get cases of Explodz that, if hit, will blow up. You also get cases of tennis balls that will fly all across the level once hit.

Once you finally finish the last section you head into the Explodz factory. Unfortunately, instead of a conclusive level that uses all the different mechanics from the game, the final section forces you to replay the fifteen levels that you’ve already played through. I wish the ending were different. I enjoyed most of the challenges the game had to offer, and was excited to see a “boss zone.” Frankly, the ending felt like a copout.

Tennis in the Face, while not the best game on the console, is a nice game to play if you’ve got a few minutes, or if you’re waiting around. Perhaps even if you’re waiting for a bigger game to download. If the game eventually makes it to Playstation Vita it will find a perfect home.

Tennis in the Face is currently available on iPhone and Android for $2.99 and on PS4 for $4.99. If you need a new physics-based puzzle game, and don’t feel like paying more than a few bucks, then pick this game up for a mobile device. If you want to play it on consoles, I’d recommend waiting for a Vita version with cross-play functionality.

While this game is fun and has a good story, in the end, it’s just plain too repetitive. You end up playing just to finish the game, as the repetition gets in the way of the original problem-solving nature. I’m not sure if it’s worth the investment. Try out Google Play’s Clowns in the Face (a game created by the same developers with a shortened, similar structure) to see if Tennis in the Face is right for you.

Have you played Tennis in the Face? What did you think of the game? What are your favorite physics-based games? Let us know in the comments!

- Gets repetitive
- Would be a better buy at a lower price

If you don't want to pay the Angry Birds console price, but want a similar game, then Tennis in the Face is a good alternative.

Review: Return of the Obra Dinn

by Adam Mueller on July 8, 2020
Like a 60-person riddle for mature audiences, Return of the Obra Dinn is sure to get any mind thinking. Check it out in our review!

by Johnathan Floyd on July 7, 2020
Waylanders is an RPG with a big adventure. Create a custom character that has no fate except the one the player wants. What will you do?
Comments
Leave a reply