Review – The Vision Vol. 1: Little Worse Than A Man 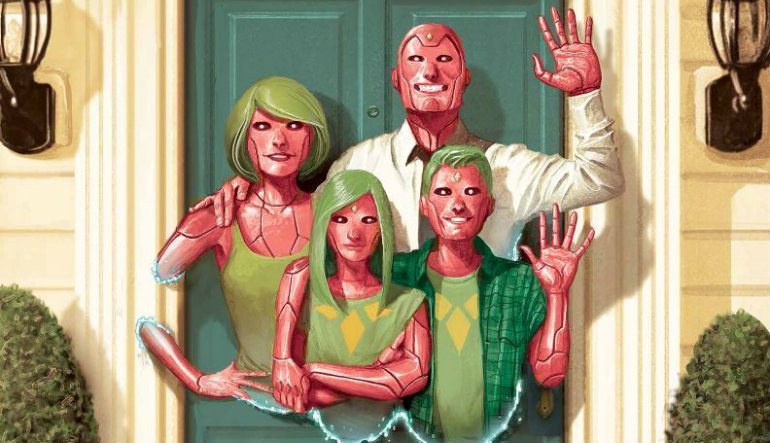 One year ago, Marvel was in the midst of the continuity-shattering event Secret Wars. Spinning out of this event was the All-New, All Different Marvel initiative, bringing with it slew of new titles, some familiar, and some bold departures. The Vision is of the latter sort. The book is written by Tom King (The Omega Men, Grayson, and, as of June, Batman), who has been described by industry staples as the greatest up-and-coming writer seen in years. And for good reason. King’s words, along with the art of Gabriel Hernandez Walta (Magneto, Thunderbolts) have crafted a story unlike any other I’ve read in a long time, and produced what is undoubtedly the best book to come out of ANAD Marvel.

The book does a great job of telling you what you need to know about the character, but let’s do a quick overview anyway: The Vision is a synthezoid, created by Ultron, using the brainwaves of the slightly more obscure hero, Wonder Man, to fight the Avengers way back in the 60s.  The Vision turned on his “father” and joined his would-be victims, and has been a trusted member of the Avengers ever since (with some hiccups/deaths along the way; this is comics after all). Years ago, Vision was the husband to Wanda Maximof, aka Scarlet Witch. With those days long past, we begin our story here with Vision’s desire for a real family.

Violence: Unlike most books from the Big 2, the story is not rife with cartoon violence. When it does occur, however, it can be pretty graphic, with lots of dark blood and blunt trauma. I would rate it PG-13.

Language: Books from the Big 2 generally don’t stray into strong language, and this is no exception.

Spiritual Content: There are questions posed about the nature of life and humanity, and, while not explicitly related to religion, they will make you think.

Sexual Content: There is an implied sex scene, but for once it’s between a man and his wife.

Positive Content: This is a dark book, where many characters make poor decisions. Still, the questions it poses about life, humanity, and family are important ones to ponder.

The beginning of our story showcases one of King’s main talents–that of setting a scene. Before we lay eyes on The Vision, his new northern Virginia neighborhood is showcased to us. King tells us about the kind of people who live there, and what their lives have been like. We then follow two of The Vision’s neighbors, George and Nora, as they bring cookies to his home as a welcoming gift. Before The Vision answers the door, we learn more about George and Nora, what they do, and how they think. (With any other writer, spending time on minor characters might seem a waste, but with King, everything fits. Everything that might seem irrelevant comes back in some way.) When he opens the door, we find that The Vision has built a synthezoid family for himself. He is accompanied by his wife, Virginia, and his children, Vin and Viv.

The majority of the first issue is uneventful, but enrapturing. Though we’re being shown relatively mundane things, such as The Vision’s showing the neighbors around the house or the kids going to school, the characters and questions explored keep the reader hooked. There are many philosophical overtones as The Vision and his family contemplate what it means to be human and how they fit in a world in which they are so different. Each character, from major to minor, has a defined and unique personality, evident in both their speech and in King’s narration asides about their past and future. The fact that most of the first issue is dedicated to setting the mood makes its ending all the more shocking. I wouldn’t dare spoil it, but what happens at the end of the first issue shatters their peaceful suburbia and plunges the family into a life of violence, secrets, and lies.

If this book didn’t feature Marvel characters, I would swear that it was an Image or Vertigo offering. Its dark mood and blunt narration set it apart from the rest of ANAD Marvel. The use of foreshadowing is especially effective, with King explicitly telling the reader that certain characters are going to die by the end of his story, and the circumstances in which they will perish. It adds a sort of oppressive weight to the story, an ever-present shadow hanging over the proceedings.

Walta is at the best I’ve seen him here in this book. My last exposure to his art was the Thunderbolts run, featuring Red Hulk, Deadpool, etc, which I hated everything about, so I was pretty sour on him by association. But his art is perfect for the gothic suburbia that King has crafted here. His pencils are realistic and unexaggerated–a far cry from the superhero norm. The faces are unique and detailed, with The Vision’s being as expressive as the humans, while still appearing synthetic. A standout is the shadowing work, which is excellent. Shadows dance across scenes, adding to the moodiness of the affairs.

The coloring work, by Jordie Bellaire is also excellent, with the inks being very defined yet still slightly mute in keeping with the gothic tone. The coloring and pencils work with the writing to create a somberness that pervades the book, which I still feel now, just typing about it.

King and Walta have crafted something special here. King has said that he has planned for this story to last 12 issues, and, if the second volume is as good as the first, then it’ll be one of the best creative team runs that I’ve ever read. I have my share of issues with All-New, All-Different Marvel, but I’ll gladly take the bad in exchange for this book. If you don’t read anything else from Marvel or from the Big 2, or even if you don’t read comics at all and just stumbled on to this review, you should read this book. I’ve always been one to champion comics as having just as much literary merit as conventional novels, and this book is a perfect example of that. The setting, narration, mood, themes, and characters are all products of top-notch writing. The Vision is a truly outstanding title, and one that you should be reading.

The Vision provides a moody take on life, love, and the American Dream in superhero suburbia. If there's any comic you should be reading right now, it's this one.

Marketing and Government student at the College of William & Mary. Video Games and Movies writer. Enjoys Jesus, writing, and all things geek.