Review – The Vision Vol. 2: Little Better than a Beast 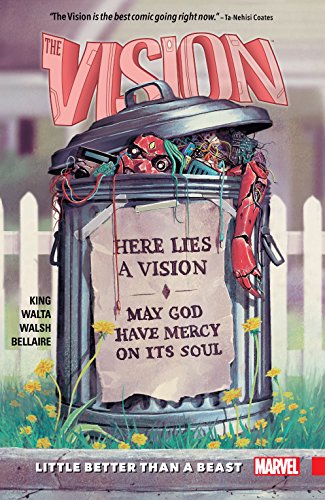 When Daddy Dearest Ultron created the Vision, he gave the Christmas-colored synthezoid a prime directive, destroy the Avengers. In a classic example of “You Had One Job,” Vision defied his robotic master’s commands and eventually sided with the heroes. As a member of the Avengers, he battled in the Kree/Skrull War; found love in the arms of Wanda Maximoff, the Scarlet Witch; and was torn apart by She-Hulk after his (now ex-)wife suffered a psychotic breakdown. Standard hero stuff, I promise.

Through it all, Vision has tried to maintain a certain level of humanity, a narrative thread found in Tom King’s The Vision miniseries. Volume 1 of King’s story, Little Worse than a Man, collected the first six issues. Volume 2, Little Better than a Beast, continues from where King left off, wrapping up the series.

Violence/Scary Images: Much of the violence in the book happens to Vision and other synthezoids. For example, a robot’s heart is ripped from its chest; another is slammed against a wall and torn open. One synthezoid is punched repeatedly in flashbacks. A character is killed by electrocution while a different one commits suicide by ingesting a lethal substance. An all-out brawl occurs between a character and several opponents – combatants are punched, kicked, and blasted through walls. It’s implied a couple die in a house fire.

Sexual Content: Two different couples are seen in beds, without clothes but covered by sheets. A few people kiss.

Spiritual Content: Two characters discuss prayer and the unlikely existence of God. A character is prophesied to raze the world.

Language/Crude Humor: A few characters use God’s name in vain. D*** pops up a few times, plus a handful of bleeped-out curses.

Other Negative Content: Several characters lie and keep secrets from each other, including police officers. Someone makes a false confession to the police. A character is recruited to spy on others.

Positive Content: Vision and his family try their hardest to be human, despite the suspicion with which others act towards them. They deal with problems as they come along, initially confronting issues in the kindest way possible. Characters genuinely care for one another, risking their lives for the safety of those they love.

“Family” is King’s key word for the first half of The Vision. Readers are introduced to Vision, his wife Virginia, and their children Vin and Viv. The writer imbues each family member with personality, giving all four main characters distinct voices and attributes and showcasing how even synthetic characters could resemble humans. Maybe they don’t need food, maybe they can phase through walls instead of using doors, and maybe they’ve got a reddish complexion and metallic skin instead of flesh, but they’re awfully similar to you and me.

“Humanity” serves as a potent phrase for the second half of the series. King has palpably introduced readers to the theme of the Visions being “almost human but not quite,” but he ramps up the idea in this second volume. The first six comics displayed the Visions’ attempts at being human: meeting neighbors, making friends, attending school. The series’ latter issues deconstruct that concept, asking what happens when the Visions’ efforts are stymied, either by others or themselves. Despite their best efforts, the family has found the road to a normal life is full of potholes, as evidenced by some of Virginia’s actions and the response to her actions.

The author earnestly makes a case for the Visions’ humanity while continually reminding readers that his protagonists aren’t quite human. Vin may enjoy reciting Shakespeare aloud (I mean, what high school student doesn’t, right?), but he simultaneously hurls a Frisbee out a window for his flying robotic dog to catch. When the family goes out to dinner, as families are periodically wont to do, Vision simply asks their server to “wait forty-five minutes and bring me a bill for that amount” instead of ordering any food. Viv visits a snowy grave site, but instead of tramping her feet, she makes her body intangible and phases through the flakes. This blend of the natural with the unnatural–and, considering this is a superhero comic, occasionally supernatural–gives the series a decidedly uncanny yet engaging vibe.

Even the way the Visions speak is both relatable and unique. The dialogue evokes a mechanical tone, with drawn-out phrases and complex utterances, helping you realize the Visions don’t express themselves the way we do. Even so, the meanings behind their eloquent phrasing is comprehensible and relatable. When Viv views something disturbing, she simply states, “I should not have seen that.” The statement is objective, yet the girl has become so involved in the story we can instantly identity the emotions behind the words. Thus, King gives you characters to relate to but offers enough differences to add conflict and tension. As you read, you understand that, in one way or another, the Visions will never be wholly normal. This doesn’t mean their endeavors are in vain or considered foolish; they’re just difficult to achieve. That struggle endears them to you.

This same struggle also brings a certain amount of tension to the plot. For the sake of spoilers, I won’t reveal details, but it should be noted that much of the conflict comes from a singular incident. In the series’ first issue, Virginia murdered one of her husband’s old enemies, the Grim Reaper. As a result, several characters are put in positions where they have to choose between a moral option and a selfish alternative. How these characters respond to those situations frames the story and continues building upon King’s theme. If the Vision chooses whether to keep secrets from his Avengers teammates or be honest with them, and if that decision is determined by an inherent sense of right and wrong, doesn’t that mean he isn’t just a computer? A computer can’t know the difference between justice and injustice. But humans can.

On the flipside, King also introduces several moments of joy for his fictional family to experience. Vision gently touches Virginia’s hand when she’s distressed. When Viv attempts praying, Vision kneels beside his daughter and joins her. Vision’s “brother” Victor Mancha (another synthezoid given life by Ultron) visits his “family” and tries to connect with the kids and Virginia. Genuine moments of loving humanity pepper the tale, working to balance out the grimmer aspects. The writer reminds us that, as difficult as human experience can be, there is also joy. The Visions are like us in more ways than one. They come to understand both the bitterness and sweetness of life in all its magnificent, fragile complexity.

Interwoven with the story are absolutely wonderful references to past continuity. King devotes a whole issue to summarizing Vision’s previous relationship with the Scarlet Witch, implying that Virginia’s programming is based on Wanda. Scenes of romance and care are mixed in with several historical tidbits. Continuity buffs can take joy in watching the Avengers battle Count Nefaria in the background or be entertained by Vision and Wanda seated at the same dinner table as Quicksilver, Agatha Harkness, and Wonder Man. King takes decades of Vision’s history and compresses it into one issue, and as someone whose experience with the character is highly limited, I enjoyed the detour.

Though King is reliant on continuity, he’s never pushy about it. As I mentioned, it’s only implied that Virginia is based on Wanda, showcasing the writer’s talent at subtly injecting details. He never beats readers over the head with the fact, but juxtaposes the two women in a way that makes you draw your own conclusions. Victor Mancha, who debuted in Brian K. Vaughan’s early-2000’s Runaways series, becomes an intriguing supporting character. His connection to Ultron, and by extension Vision, make him an ideal member to bring into the story. Several Avengers pop up late in the game. Though characters like Sam Wilson’s Captain America, Jane Foster’s Thor, and Kamala Khan’s Ms. Marvel may confuse some readers unaware of Marvel’s All-New, All-Different titles, their inclusion still feels natural. King’s focus is primarily on the smaller world he creates for the Visions in Washington, DC, but he doesn’t shy away from reminding readers just how large, imaginative, and intertwined a world his characters inhabit. The Visions don’t live in a bubble; their actions have consequences spilling outside the confines of their family.

Vision was always meant to be more than a robot, from a narrative perspective. Roy Thomas famously had the character shed a tear in Avengers #58 when the team accepted him as one of their own. But even though Vision has been treated as human–undergoing pain, experiencing triumph, even getting married–nowhere does that humanity express itself better than King’s miniseries. It’s funny how non-human characters can so beautifully and succinctly describe and mirror the human condition, perhaps better than some of their flesh-and-blood counterparts. Through Vision’s eyes, we get a view of ourselves from the outside, from the perspective of someone looking into our world and going, “I want that.”

King doesn’t skirt the difficulties of humanity, but he doesn’t make being human look bleak and undesirable. There is right. There is wrong. We exist in the middle, seeking purpose and identity in an imperfect world. The concepts here are not grounded in matters of faith or spirituality, with no mention of the hope provided by Christ. Vision’s humanity, no matter how profound, still falls under a “pull yourself up by the bootstraps” type of individuality. This lack doesn’t cause King’s narrative and themes to lose their poignancy, though. Instead, it gives his story a perspective readers will benefit from pondering and debating as they finish the final issues.

The second half of Tom King's well-written miniseries is a joy to read, an introspective look at humanity through the synthetic gaze of a genuinely sympathetic family.