Review – Word for Word Bible Comic: The Book of Jonah 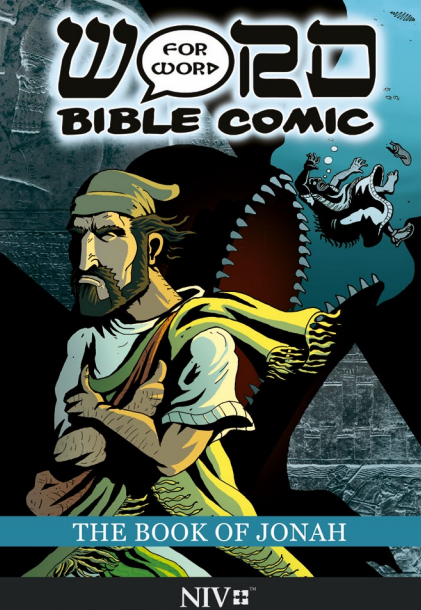 Some people do whatever they can to get out of a commitment. They make excuses, ditch at the earliest opportunity, chart a boat to a different city in the opposite direction of the one where they’re supposed to preach a message of repentance. We’ve all been there. Jonah was no different.

The Word for Word Bible Comic (W4W) presents the ultimate fishing trip in a new, graphic format. Taking books of the Bible and translating them literally, W4W provides visually appealing takes on Scripture that are also, in their words, “unabridged” and “untamed.”

By “unabridged,” W4W means they present accurate portrayals of biblical narratives. NIV translations of Scripture are used for dialogue and narration, with characters, actions, and scenes framed by the literal words of God.

By “untamed,” the creators refuse to shy away from the darker parts of Scripture. The Bible is filled with stories of violence and depictions of sin. While the book of Judges describes how Samson slew the Philistines with the jawbone of a donkey, W4W presents such action viscerally. Obviously, certain subjects are discreetly implied, but W4W wishes to offer a real look at Scriptural narratives, not diluted images.

That being said, W4W advises their content for readers 12 and older (or 15 and older in some cases). Fortunately, with their retelling of Jonah, you won’t find anything fishy… except maybe the story.

Violence: We see silhouettes of a few impaled people and a series of heads are (bloodlessly) shown on spikes. Sailors sacrifice to God, leaving a bloody animal corpse on the deck of their ship.

Spiritual Content: We see people worshiping both the living God and false gods. People make sacrifices. The entire story centers on Jonah’s relationship with God and the city of Nineveh’s repentance.

Other Negative Content: Jonah is, somewhat graphically, regurgitated by a large fish.

Positive Content: The graphic novel emphasizes the themes of repentance, God’s forgiveness and mercy, and redemption as found in the book of Jonah.

In my mind, the story of Jonah is one of those Old Testament tales right up there with the Israelites crossing the Red Sea, Elijah calling down fire from heaven, and David vs. Goliath. It’s a “classic,” if such a word can be ascribed to Scripture, a tale told and retold for generations. You hear “Jonah,” you immediately think of a massive fish swallowing the prophet whole like an Old Testament precursor to those giant sandworms in Dune.

So what new way can such an ancient tale be told?

W4W wisely opts for a middle ground position: their method isn’t “new,” per se. This isn’t VeggieTales exchanging sea-faring sailors for a trio of lackadaisical pirates with a hankering for Mr. Twisty’s Twisted Cheese Curls. W4W isn’t telling an updated or modern version or turning Jonah’s tale into an allegory. They take the original biblical text and breathe illustrated life into the familiar narrative.

The idea seems simple enough, but once you dig into the story, you discover an intriguing challenge. Unlike other adaptations, W4W utilizes direct quotations from Scripture for all their text, both dialogue and exposition. They don’t deviate. They don’t create new dialogue, invent new characters, throw in a couple subplots, or offer creative thematic elements to bolster or enhance the narrative. Where other adaptations may rely on humor or audience surrogates to rope in readers, W4W sticks to its mission by providing a “bare bones” retelling. They must engage the reader by exposing the text’s inherent creativity without adding to it.

Occasionally, the narration feels a tad distracting. A few phrases are written alongside panels instead of in text boxes and can sometimes be missed; I actually went back a few pages to see if I had skipped over a phrase or two. These phrases are mostly limited to dialogue tags (“Then the sailors said to each other”) and don’t hinder the story if missed. I just wished, for the sake of consistency and ease of reading, that these phrases were either removed or inserted as caption boxes. Otherwise, W4W’s retelling is largely successful.

To engage its audience, the comic draws in readers on both the merit of the story and W4W’s interpretation. The beauty of the graphic novel format is how it visualizes text and verbiage. This is especially true of adaptations, where previously text-only stories are given visual form. W4W takes a story we’ve only ever imagined when reading the Bible and gives it to us as a series of images.

When readers are told Jonah’s journey through Nineveh takes three days, a panel depicting the city emphasizes its breadth and width; Nineveh extends horizontally beyond the panel’s edges and back to where it meets the horizon in the background of the panel. In a notes section after the story, W4W describes the research and contemporary depictions of Nineveh consulted in shaping the city. Instead of hastily drawing a city that only looked like it would take three days to venture through, W4W turned to the resources available to them to make Nineveh feel historically authentic.

Reading the graphic novel, I was struck by how sparsely dialogue is used in the original biblical story. By sticking to the literal translation, W4W has to make Jonah relatable through methods other than dialogue. Fortunately, they admirably struggle against this limitation through facial expressions and posture, visually reflecting unspoken attitudes.

One of my favorite moments in the graphic novel sees Jonah flee from God on a boat to Tarshish. An insert panel (a panel within another panel), imposed on a larger image of the boat, highlights Jonah’s face. He smirks cunningly, his eyes slanted upward. Without words, W4W gives the impression that Jonah is mighty pleased with having “successfully” fled from God.

A Message of Mercy

Impressively, as they retell Jonah’s story, W4W never loses sight of the book’s powerful message. After his ordeal with the giant fish, the once proud prophet is seemingly humbled. His appearance is starkly different in the following pages–his hair and beard are bleached, his demeanor downcast, his skin creased. His time entombed within the fish has left its mark. Though W4W fantastically notes the physical effects of Jonah’s trial, they also carefully craft his character as he delivers his message to Nineveh. Arms folded, Jonah grumpily goes about his work, his anger erupting into a shouting match with God after Nineveh is spared. Without directly telling us, W4W makes it clear: Jonah actually hasn’t learned his lesson after his time as an hors d’oeuvre.

In the graphic novel, Jonah jabs an angry finger at God; he pouts and shouts, sulks and sits in his self-inflicted misery. W4W wonderfully contrasts this with a scene of Nineveh’s king, wearing sackcloth and covered in ashes, decreeing his people to turn from their sinful ways. A table piled with food in an earlier panel sits empty, and the king’s royal robes lay folded to one side. Again, W4W creatively works within the narrative to provide an illustrated contrast – depicting the king’s throne room before and after his repentance showcases the deep change within him.

The book of Jonah is a story of contrasts – Nineveh’s repentance vs. Jonah’s continued stubbornness, Nineveh’s immediate obedience in light of God’s message vs. Jonah’s disobedience in light of God’s commands, Nineveh’s reaction to mercy vs. Jonah’s reaction to mercy. All of this is rendered wonderfully. You could consider these narrative themes easily enough by reading the original biblical text, but I also appreciate W4W’s ability to draw attention to these parallels by giving them physical form. Simultaneously, W4W doesn’t make these parallels obvious or heavy-handed. Jonah’s brief delight at the plant God sends is never verbalized; even so, we can understand his joy at receiving such a merciful gift and the impact of its object lesson once God takes it away.

As fantastically as they shape the contrasts, W4W stresses a constant: God’s mercy. He mercifully sends the fish to swallow Jonah when the prophet could have drowned, He mercifully spares the people of Nineveh after they repent, He mercifully provides shade for Jonah. Again, you could pick these ideas out of the original text, but the illustrations here make the themes more impactful. The image of Jonah descending to the sea’s depths, entangled in seaweed, heightens the danger he’s in, enhancing later moments where Jonah is rescued by the fish and disgorged from the creature’s stomach. Jonah’s joy at the weed growing and protecting him from the sun serves as a microcosm for God’s mercy towards the Ninevites.

Despite the age rating suggested on some of W4W’s other interpretations, I found little disagreeable content in the graphic novel. Some of Jonah’s narrative moments may feel a bit grim and hopeless – like sinking to the bottom of the sea only to be engulfed by a massive fish. Yet these seemingly darker moments reflect the overall message. A brief essay after the comic states, “Jonah is not the model believer and has many character flaws,” claiming Jonah’s story is meant to point beyond the prophet’s failed nautical excursion. It’s when Jonah comes to the end of himself that he (momentarily) seeks God’s succor and mercy. It’s when God points out the mercy He’s shown both Jonah and Nineveh that the reader is meant to pause and reflect upon how He’s shown them mercy and how they might react. Are we grateful or grating? W4W’s visually enticing treat only helps the often bitter pill of self-reflection go down as easy as a mouthful of seaweed-flavored prophet.

- A few distracting strands of text

This literal graphic translation of Jonah stays true to the source material while visualizing its powerful themes and messages in a captivating format.