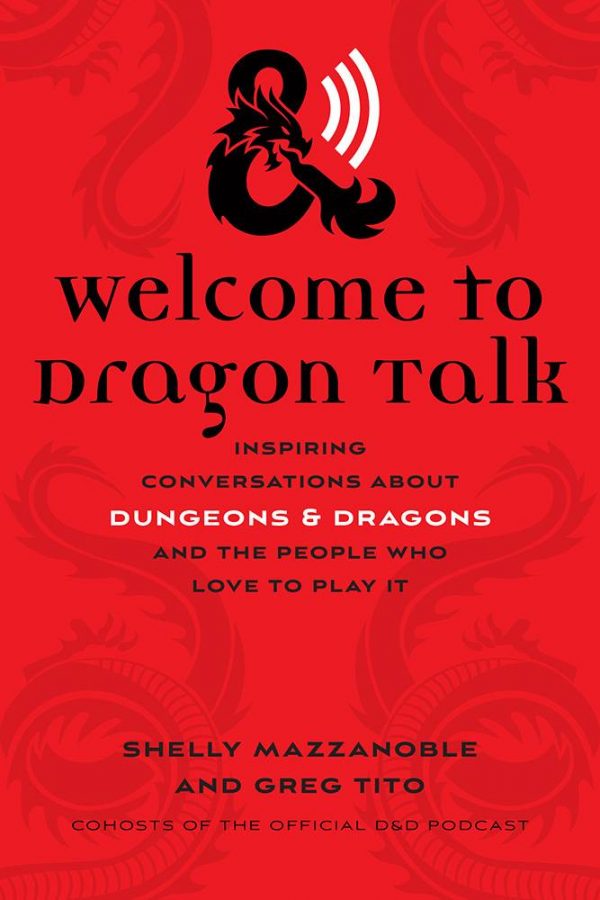 I love the concept of Dungeons and Dragons (D&D). I grew up imagining myself in the worlds of fantasy novels like Harry Potter, The Hobbit, and The Witcher series, so it’s only natural the idea of getting to roleplay as an elf cleric or even lead a game as a Dungeon Master (DM) would be appealing. Alas, I say I love the concept of D&D because I’ve never actually gotten to play! Nevertheless, I’ve collected many related tomes such as the Player’s Handbook, Monster Manual, and Dungeon Master’s Guide simply because I love the art and writing style found within.

That being said, Welcome to Dragon Talk only increased my desire to one day find the time and friend group to give it a go. With interviews from a vast, diverse group of people whose lives have been touched by the game, this book packs a powerful punch and would help any skeptic realize D&D is so much more than a group of middle-aged man-children hanging out in their mom’s basement. In fact, nowadays, you’re more likely to find mom and dad joining in on the fun!

(Please note: this review will not be getting into whether or not Christians should play D&D…we already have an article on that!)

Violence: References to killing monsters throughout. Talk of being hit in the face with a kickball. A character is burned and killed in an oil fire (not detailed). A crack about a kickball almost knocking the braces off your teeth. A spell called magic token enables a character to pull off fingernails or yank out teeth to use as telepathic messaging devices. The Hand of Vecna is a magic item that involves cutting off a character’s own hand and replacing it with said magic item.

Drugs/Alcohol Use: One player character is named Drunky. A stolen beer is mentioned. Greg mentions Shelly sipping sparkling wine on vacation. It’s noted one DM is a pothead. A humorous reference is made to an IV filled with Pinot Grigio. Mention of White Claws and swigs of vodka. “Take a Xanax” is used as a catchphrase. A podcast previously titled Dungeons and Dragons and Drunks is called out.

Spiritual Content: Obviously, there are numerous mentions of wizards and magic/spells (this is D&D, after all). Greg mentions the “conservative Christian fear-mongering” of the Satanic Panic in the 80s. Plenty of gods/goddesses that are a part of game lore are mentioned. Shelly states one of her player characters may or may not have made a pact with a demon. One player in an essay is said to be a practicing sorcerer. There is mention of a warlock character making a deal with a devil. Greg is an admitted atheist. Necromancy, the practice of magic involving communication with and resurrection of the dead, is a possible skill in the game.

Other Negative Content: One author is clearly still upset at his Catholic mom for not letting him play D&D with his friends when he was growing up, as he mentions multiple times throughout the book. There is talk of Nazi symbols in war gaming heraldry. Slavers and slavery, as well as blackface in cosplay, are written about. Some interviewees have dealt with suicide and depression. One essay discusses playing an “evil campaign” (from a villain’s point of view).

Positive Content: Both authors stress the game is for anyone and everyone. Inclusivity, diversity, cooperation, imagination, and making new friends are heavy themes throughout. There is some discussion against systematic racism and misogyny. The basic concept of a group of heroes fighting evil is what D&D is about at its core. A few essays focus on playing D&D as group therapy. By playing the game, young people learn the importance of empowerment, leadership, and how to say no. One interesting aspect brought up is the concept of the X-Card — “an optional tool created by John Stavropoulos that allows anyone in your game (including you) to edit out any content anyone is uncomfortable with as you play” (X-Card official definition). An interviewee has worked to overcome body dysmorphia. There are examples of using D&D to enhance reading skills and discuss ethics. A visually impaired map maker has been extremely successful in her craft, and has played with a hearing impaired DM and started a game for people with impairments. D&D helped one interviewee overcome alcoholism. Jennifer Kretchmer and Blind Temple have built guidelines for playing a disabled character. An interviewee with hearing impairment talks about how cochlear implants changed her life.

At its core, Welcome to Dragon Talk, written by the hosts of the official D&D podcast Shelly Mazzanoble and Greg Tito, is a collection of essays about the interesting and incredibly diverse array of guests they have had on the show.

When I use the word “diverse,” I mean it. Men and women, young and old, introverted and extroverted… the list goes on. I think the one thing this book set out to do, it accomplished. It enables one to see the average D&D player is anything but stereotypical. While I’m sure there are plenty of those who fit the “geek with glasses and pocket protector” image (and I say this as a geek with glasses… sans pocket protector), Dragon Talk opened my eyes to the astounding range of different people who love this game.

I’ll start off with some of what I loved about this book. As someone familiar with the concept behind the game but not its history, I found the introduction to be extremely helpful and informative. From how it got started to the different editions of the game (the company is now on its fifth edition), newbies will catch right on and have a solid foundation for understanding D&D’s background.

As a woman, I loved how the authors included some great interviews with many female players. The chapter about how Gary Astleford created a D&D badge for a Girl Scout troupe made me smile from ear to ear. While I love my male friends dearly and have many of them, I wish I had more friends of the fairer sex who’d be down to give the game a shot.

There are many interviews with people of color, different gender identities, and disabilities, so you’re never left with just one perspective. From teachers to therapists, children, teens, actors, parents, and grandparents, this book makes it clear anyone can play. As a side note, I think it would have been fascinating to delve into a few players of different religions. I know the Satanic Panic left a bad taste in many people’s mouths, but not every Christian sees the game as a pathway to the “dark arts,” myself included.

This point actually leads into something about the book I didn’t care for. I’ll preface this by saying I know many people whose hobbies have been knocked or even outright banned by their parents. I am not a parent myself, so I cannot say I would react the same way to my child’s interest in D&D as some others would. However, Greg’s mentioning of how his parents wouldn’t let him play when he was growing up was restated multiple times and felt stale to me after a while. Granted, I was blessed with a mom and dad who let me enjoy Harry Potter without thinking I’d serve He-Who-Must-Not-Be-Named, so maybe it’s a bit harder for me to relate. (Sorry, Greg! Nothing personal.)

Both he and Shelly sometimes got a little too personal/random for my liking for a book centered around D&D. For example, Shelly talks an awful lot about her passion for The Bachelor and HGTV’s House Hunters in chapters about actresses Emily Axford and Krystina Arielle. I’m here for D&D, not guilty-pleasure TV. In the first chapter featuring actor Matthew Lillard, Greg spends too much time talking about running into SNL’s Bobby Moynihan at a restaurant while waiting for Lillard. I felt there was no real purpose in mentioning him other than the chance to name-drop. Nevertheless, these were only a few flaws in an otherwise great collection of interviews.

Welcome to Dragon Talk was an enticing read. I truly hope Greg and Shelly write a sequel that covers some of the other interviews they’ve conducted during their time on the podcast. I’m not a regular listener, but after reading this, I just might be.

And Greg, for all my complaining, I have to say this quote stuck with me: “Mom used to say she knew a lady whose son was into Dungeons and Dragons and that’s why he didn’t have friends. Ironically, it’s exactly the reason so many kids do have friends.” While I’m an advocate of parents being in tune with what their children are watching, playing, reading, etc., I also want them to realize a parental desire to love and protect their children may be a hindrance to their growth in this world. Every great adventure features trials that must be overcome, and these very trials are what build us into who we were always meant to be. If you’re that worried… why not try to make it a quest for the both of you?

“Consider it pure joy, my brothers and sisters, whenever you face trials of many kinds, because you know that the testing of your faith produces perseverance. Let perseverance finish its work so that you may be mature and complete, not lacking anything” (James 1:2-4).

- Unnecessary details included at times
- May have been an enhanced reading experience if photos of each interview subject were included
- Would have liked a little more specificity in how to get started playing (book titles, links, etc.)

Despite some unnecessary details included by the authors, Welcome to Dragon Talk is an interesting read packed with what makes D&D great: adventure, comradery, and acceptance.

Lexi Tucker wishes she had a more exciting story to tell about being saved, but she's been a Christian literally her whole life. She's a graduate of Loyola Marymount University in Los Angeles, Calif. with a bachelor's degree in English and minor in Asian Pacific Studies with a certificate in Journalism. She likes anime, manga, handheld games, cats, and boba.