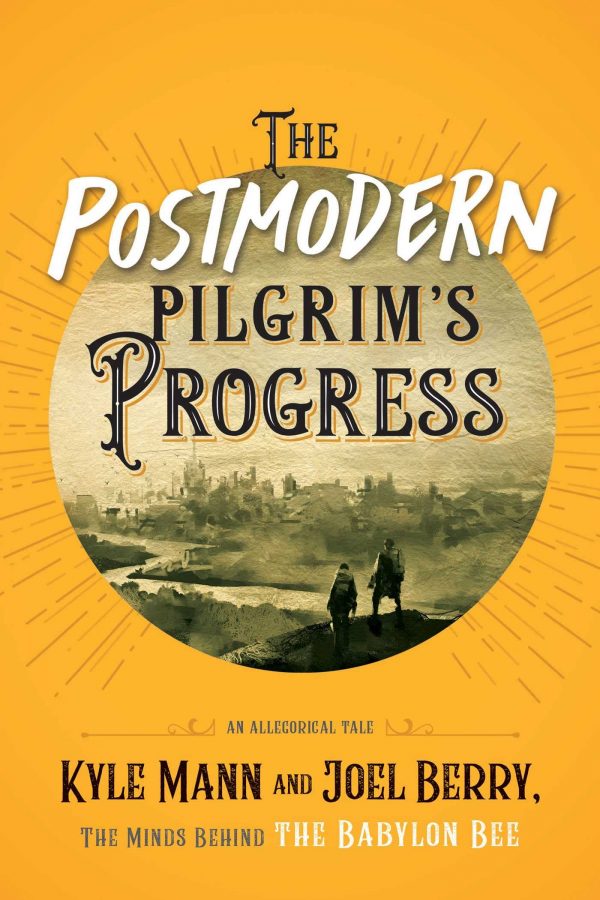 Those crafty Christians are at it again.

Wrap your head around this: the Babylon Bee, a conservative Christian news site…that’s completely satirical. “Fake news you can trust,” a newsletter sign-up prompt pithily pontificates to visitors. In an age where we scrounge around the internet to determine whether something is true or not, isn’t it great to have a site that honestly tells you it’s making stuff up?

Humorously targeting politicians and issues on all sides, church leaders and culture, and various strains of entertainment, the Bee routinely leaves few unscathed… or unstung, as it were. Kyle Mann and Joel Berry, editor-in-chief and managing editor of the Bee, respectively, have recently distilled a whole host of concepts and principles into their new book, The Postmodern Pilgrim’s Progress.

A tongue-in-cheek parody of John Bunyan’s classic The Pilgrim’s Progress, Mann and Berry’s novel is an updated rendering of Bunyan’s prose with a couple twists. If you’ve ever wished Bunyan tackled American political divisions or used 21st Century theological rhetoric while exploring a small sliver of the multiverse (I mean, I can’t see why he didn’t), this may just be the book for you.

Not a niche market whatsoever.

Violence: People are struck by rocks and obliterated by a meteor. Other characters are sliced, stabbed, or shot with arrows in somewhat detailed fight scenes. Still others are slapped, punched, kicked, or generally beaten. A few references are made to suicide. A city prioritizes infant sacrifice.

Sexual Content: Someone lives with their “life-partner,” though this is not mentioned in a way to suggest the authors condone such a practice. Characters sojourn briefly through a city’s red light district.

Drug/Alcohol Use: A couple of references are made to drugs and drinking. We see a few folks down beers and smoke cigars.

Spiritual Content: The entire book is based on Bunyan’s classic novel. As such, several Christian concepts, items, and individuals are recast in an allegorical mode, such as the King and the Book, a kind of Bible. References are made to prayer, the afterlife, and the Old Testament. An early scene takes place in a church. Someone is encouraged to make a deal with the Devil.

Language/Crude Humor: No swearing, but we’re told a few characters curse; it’s said one person utters “the F word” in a stressful situation.

Other Negative Content: A character lies. A joke is made of an obese character.

Positive Content: Protagonist Ryan genuinely grows throughout his journey, particularly with his companion Faith; they aid and help one another throughout the novel. Ryan also dearly loves his brother, and the novel takes some time to explore their relationship. The whole book is allegorical, and readers should be interested in comparing and contrasting their own spiritual journeys to Ryan’s.

The reviewer received a copy of this title from the writers.

I am not overly familiar with the Bee’s particular brand of satire, having browsed only a handful of articles over the last several years. But I understand the site often aims their crosshairs at people and events for the express purpose of lampooning their foibles. Maybe they’ll poke fun at Joe Biden’s faulty memory, Joel Osteen’s perfect smile, or Geeks Under Grace’s awful review of their recent foray into fantasy.

The Postmodern Pilgrim’s Progress, while containing satirical elements, is not necessarily satirical at its core. Sure, various elements feel like parody – the whole premise is blatantly based on Bunyan’s novel, and the story’s narrator consistently references pop culture in a winking manner – but the crux of the novel is intended to be serious. As a reader, you’re not supposed to reach the final page and chuckle at a last-minute quip or verbal barb thrown in anyone’s direction. This book is supposed to sit with you.

Here There Be No Lions, Witches, or Wardrobes

The novel follows Ryan, an average 33-year-old white male who gets clonked on the head by a video projector at a megachurch and, in his unconscious state, is transported to the Dying Lands. From here, Ryan is thrust on a quest to reach the Golden City and find its King, who will save the Dying Lands from complete devastation. That Ryan is an agnostic with serious issues against God/the King is also important. This journey is one of internal transformation as much as it is about external transportation.

The Postmodern Pilgrim’s Progress amuses on several levels, particularly regarding the story’s unnamed narrator. An opaque cosmic being and chronicler of stories, the narrator guides us through Ryan’s tale, offering a plethora of clever witticisms, cultural references, and fond reflections on cheese. Running gags, footnotes detailing other parallel worlds, and pop culture references ranging from Fight Club to Infinity War maintain the narrative’s comedic tone. Ryan forges a bond with his traveling companion Faith through anecdotes and actions alike, a decent blend of awkward humor and genuine humanity from both characters.

When the novel focuses on these “actions” – on characters behaving in ways both aligned with and counterintuitive to their natures – the story’s deeper themes resonate. On the surface, the whole book is structured as an allegory for the Christian faith (lower case “f”), centered on Ryan’s personal journey. In some places, this message is subtle. One of my favorite passages describes Faith (upper case “F”) glimpsing a King-follower stumbling out of a seedy institution. For a moment, they lock eyes in recognition… and then he walks away. The authors don’t hammer the message into you. Faith is clearly disappointed by this man’s example, and his brief yet dismissive look momentarily points to his guilt. Even the faithful still fight imperfection.

Other passages like this exist, where the authors employ a very distinct “Show, don’t tell” policy. The city of Evangelion is filled with scholars dedicated to studying the Book, a powerful, life-giving tome used as a “map” to the Golden City. However, they never practically use the Book as the guide it’s supposed to be. Ryan and Faith later encounter two slippery slopes alongside the Road they travel. A few characters, blind to the slopes’ descent into destruction, quibble whether the right or the left is the better option. These moments are nicely left open to interpretation – I am merely assuming, based on dialogue choices, that the discussion surrounding “right” and “left” slopes is subtly political. The message lies within the metaphors.

Even Progress Can Take a Step Back

Yet this practice is somewhat unbalanced. Scenes subtly reflecting the authors’ views on politics, real world issues, or even Christianity are contrasted by moments which thump you more directly. In Evangelion, Ryan and Faith are guided to a cemetery for followers of the King who got caught up in their debates and discussions and never moved towards the Golden City. Mann and Berry write:

“Pilgrims, followers of the King, professors, scholars, students–all had met their end here in the domed safety of Evangelion. There was no dark magic at work here, no spell that made them stay and wither away and die. They had just never wanted to leave the comfort and safety of the city. They had never left the iron gates and continued on their journey, for staying was much more comfortable.”

By this point, Mann and Berry have already made plain Evangelion’s snarled grip on its inhabitants through prior description. Even presenting the graveyard is enough to dig the knife in a little deeper, to help us understand the lives which were wasted by speculating and arguing. The above passage reinforces a point already stated.

Some readers will prefer the more in-your-face, direct approach. I personally enjoyed the metaphorical moments where I was encouraged to tether Mann and Berry’s words and circumstances to actual concepts. I get that a benefit of parody and satire is to be outlandish and blunt, reaching so far beyond the confines of logic that humor, wit, and often poignancy are found in the ridiculous. Yet, in the graveyard scene and others, a layer of seriousness presides over the words, and that same bluntness hurts their message rather than aids it.

Ryan and the Roadmap

This isn’t to say the novel fails in its mission. The story’s more beautiful moments occur when Ryan takes genuine steps of faith or makes mistakes that readers can see in their own lives. He expresses anger, doubt, and worry; he’s rattled by tragedy and circumstances he cannot control. He takes small, progressive steps in trusting a King he doesn’t even believe in at the story’s start. After facing shambling creatures, violent zealots, treacherous cliffs, and a demonic dragon, Ryan questions if his journey has been worth it. “It’s just not fair,” he says at one point, looking back at his life before the Dying Lands and his journey in them.

This is where The Postmodern Pilgrim’s Progress becomes real, tangible, truly relatable. Ryan takes stuttering steps of faith, wavering between hope and hopelessness, all on the promise that there is a King out there – a King he’s never met and cannot see but is promised He’s real. The King doesn’t strike Ryan’s enemies down with lightning, save him from peril, heal his wounds, or give express direction outside the Book. Ryan isn’t a stalwart believer from the beginning… he has to trust with every step.

Ryan stumbles. Ryan falls. Ryan gets back up. We witness it all. Occasionally, he falls, and someone tells him, “Hey, you just fell.” Sometimes, he stands, and someone tells him, “Hey, you’re a bipedal organism who just used their lower body muscles to attain an upright position.” The novel can be blunt in that regard. That’s just the writers stumbling a little themselves. Yet other times, when Ryan falls, we simply watch his pain and empathize. When Ryan stands, we watch him rise, move forward, and feel the weight, power, and risk of taking real steps of faith. When Mann and Berry allow the reader to see without telling them what to see, The Postmodern Pilgrim’s Progress becomes a Road worth traveling… like faith, it’s better when you find it for yourself.

Mann and Berry present a modern-day allegory that's thought-provoking and humorous, even if it periodically forsakes subtlety.