Exploring the "disjunction" in "The Junction" 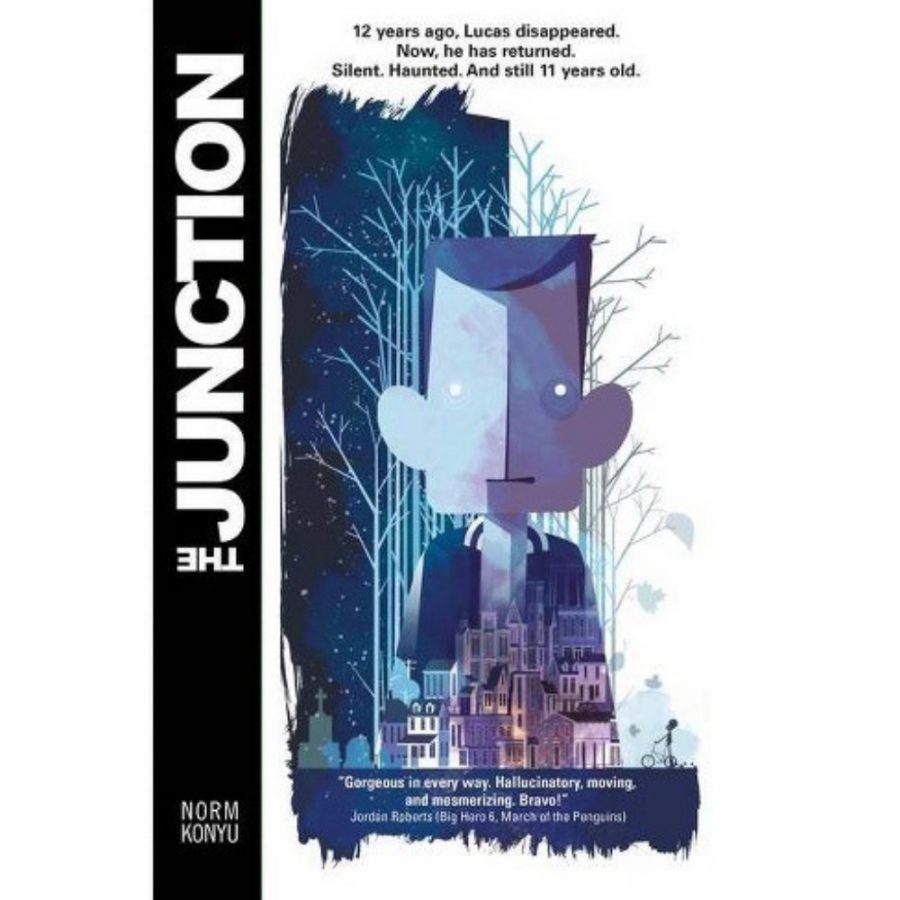 The hit Netflix show, starring vibrant, unique protagonists drawn into supernatural conspiracies centered in their hometown of Hawkins, Indiana, has been one of his go-to narratives. He loves the characters in particular. Jim Hopper, the sheriff you don’t mess around with. Former BMOC Steve “The Hair” Harrington. The little goons that make up the ever-expanding inner circle of intrepid children. Well-written and wonderfully acted, Stranger Things injects its small world with horror and fantasy alike, blending reality with a touch of amazement.

Norm Konyu’s The Junction feels similar. The book has no otherworldly abominations or telekinetic heroines; what it does have, however, is an eerie premise founded on a vanishing boy, the world he enters, and his subsequent return to reality. What happened to Lucas Jones in 1984? Where did he go? Now that he’s back, can the reasons for his disappearance be unraveled and understood?

Violence: We’re told someone is hit in the face with a rock. A character has a recurring dream involving drowning.

Spiritual Content: References are made to a family Bible and a few local churches. The main plot is constructed upon a supernatural premise.

Language/Crude Humor: A single use each of Jesus’ and God’s name in vain, plus two uses of d***.

Positive Content: Lucas possesses a loving family – parents who care about him before he disappears, and an uncle and aunt who receive him when he returns home. A few moments focus on Lucas’ friendships. Detective David King and Doctor Jean Symonds try their absolute best to help Lucas however they can.

Merriam-Webster defines the noun “junction” as “a place or point of meeting” or “an intersection of roads, especially where one terminates.” Two spaces conjoining, two roads becoming a single avenue.

Konyu’s Kirby Junction, where Lucas disappears to in 1986, serves as this sort of in-between reality. The world behaves like the Upside-Down from Stranger Things – a reality smack dab next to ours, or somehow entangled within ours, but one that’s very difficult to access under regular circumstances. The people of Medford County have never heard of it; as Detective David King and others see it, Kirby Junction doesn’t exist. But Lucas’ diaries, which David pours over as he tries discerning Lucas’ disappearance, clearly discuss the boy’s life there. This tale-within-a-tale, told from Lucas’ perspective, details Lucas’ time in Kirby Junction. We meet his parents, neighbors, and friends as they all experience life in the Junction.

Konyu masterfully dials up the mystery and suspense of Lucas’ situation, toying with the reader’s perspective. He’s never underhanded; the reader is aware, shortly after Lucas’ reappearance, that the boy was truly gone for over a decade and returned as an 11-year old kid. The mystery is not whether you can believe Lucas’ story about Kirby Junction, but more how Lucas found himself in the Junction. Not “did this happen?,” but rather “how did this happen?”

Konyu paints Kirby Junction as a blend of the fantastic and mundane. As Lucas experiences life in the town, seemingly the only home he’s ever known, he becomes more aware of bizarre occurrences. His neighbor, Mr. Singh, waits for a train that never arrives. The Schusters on Ember Street are paranoid about fire safety even though they live next to the fire station. Houses inexplicably pop up, fully formed, without explanation. The words in books and newspapers fade. Only Lucas is curious about these circumstances – or perhaps he’s the only one willing to ask the difficult questions.

Konyu leaves his inciting incident vague for most of the novel, dangling that “how?” question before readers’ noses as he unravels the rest of the tale. I often found myself encouraged to keep reading, following Konyu’s meandering narrative as detail after detail emerged. I never became confused or frustrated, but remained consistently intrigued.

I believe it’s a testament to Konyu’s writing to keep his audience curious about the narrative’s endgame throughout the graphic novel. Much like David as he explores Lucas’ diaries, and much like Lucas as he experiences these bizarre events, the reader is carefully pulled along, the promise of answers just out of reach until Konyu is ready to deliver. Skimping on details, I would argue Konyu succeeds in delivering upon his premise. The questions you find yourself asking are answered by the time you reach the final pages.

As he crafts Lucas’ story, Konyu imbues thematic elements which become clearer as the narrative unfolds. I found myself comparing The Junction to WandaVision or the Truman Show. In those stories, characters become involved in towns constructed or manipulated for specific purposes. In WandaVision, the Scarlet Witch transforms Westview into an idyllic town reflective of the life she wishes to live. In the Truman Show, Truman Burbank lives in a town carefully constructed to hide the fact it’s a reality TV set for a show centered on him.

Lucas, too, operates in a world where grim truths lie right beneath the water, where Kirby Junction is more than the town it appears on the surface. What those truths are and how they come to light impact the character as he discovers his own role in suppressing the mysteries of Kirby Junction.

Lucas, though the main character, finds himself at the mercy of circumstance as much as he becomes an agent of change. I wouldn’t necessarily criticize Konyu’s decision to limit Lucas’ agency early on, particularly as he allows the young man to have more development as the story progresses. Lucas, like the reader, learns about the world before he can practically interact with it; he becomes engaged in the mystery before he can begin to resolve its intricacies.

But Lucas truly grows as the story progresses. He’s able to act, push against the bounds of face value, and resolve inconsistencies. He gains knowledge and understanding and equips that knowledge as he best sees fit. The Junction’s primary conflict would not be propelled forward without Lucas’ thoughtful, intentional engagement with the town’s enigmatic dynamics.

At its core, this is one of Konyu’s primary takeaways. Lucas could choose to ignore the odd circumstances, leave the inconsistencies unresolved, and/or shrug his shoulders whenever a new family randomly stumbles into the neighborhood. As the narrative tells it, his family, and possibly even the Junction itself, would rather he do so. But for whatever reason, the boy is compelled to see beyond these oddities, push back, and find the truth.

Faced with the choice between accepting a half-truth, or even a conspiratorial lie, and challenging himself to discover the actual truth, Lucas selects reality. Lucas becomes endeared to the audience through this blend of uncontrollable circumstance and voluntary agency. You root for him to find the truth even as you know how the answers will change and affect him.

I did end the novel wishing Konyu had more time to develop his supporting cast, particularly the neighbors. Again, mysteries are resolved by the story’s end, meaning each character’s inclusion makes sense narratively. From an engagement perspective, however, I would have enjoyed seeing Lucas interact more with his neighbors and friends. Konyu crafts entertaining quirks, such as Mr. Singh’s eternally late train or the Schusters’ insistence on fire safety. Beyond these characteristics, the supporting cast remains largely passive. They’re static images whose importance lies less in their characterization than their presence.

The Junction is a story I would encourage readers to obliviously dive into. From the start, Konyu reveals certain plot points: You know Lucas disappears to Kirby Junction, which doesn’t appear to be real, and you know he returns. But discovering the answer to the question of “how?” is highly rewarding for anyone willing to read the tale. Whether the story’s scope surprises you or not, I hope most readers will enjoy the intellectual act of unraveling Konyu’s mysteries as he explores its depths.

As a reader, I finished the story largely satisfied with Konyu’s narrative. I found the lingering questions answered and Lucas’ characterization strong, even if the whole cast isn’t crafted as well as the boy. Konyu allows Lucas to assess and wrestle with Kirby Junction and its secrets, and it’s through this wrestling Lucas finds reality beneath the surface.

When Jean and Dave initially meet, the doctor encourages the detective as he scours Lucas’ diaries. She suggests he looks for “shreds of truth.” The suggestion feels like a subconscious nod to the reader to keep an eye out for where the empirical and enigmatic collide. Truth and fantasy meet at an intersection in this tale – a junction, if you will – and though they meld together to form a single story, Konyu keeps both aspects distinct. Amidst the paranoid neighbors and eerie circumstances, Lucas discovers how to distinguish truth from reality. How he uses that understanding shapes the rest of Konyu’s graphic novel and brings the final pages to a genuine, touching close.