G.K. Chesterton and the First Nations 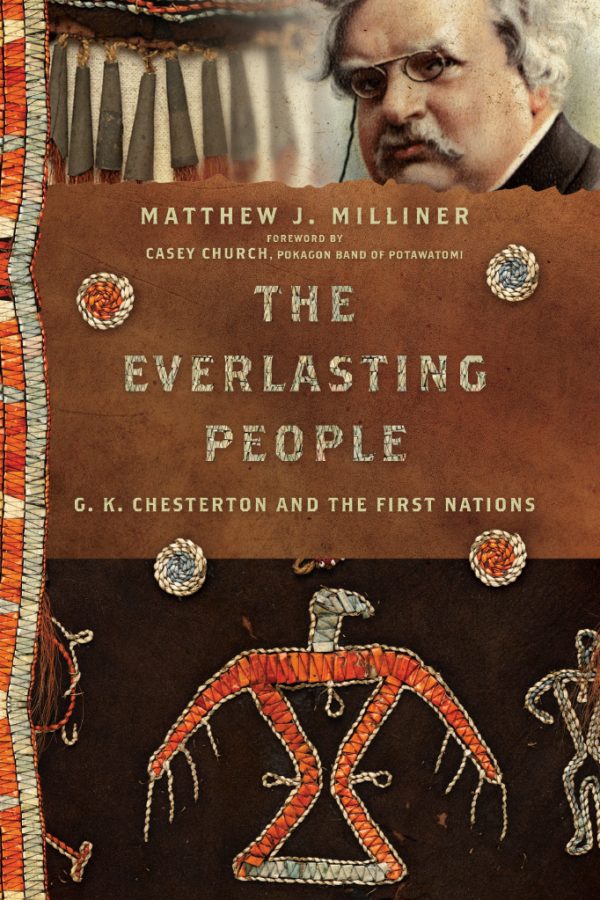 When I attended the 2021 Chesterton Conference outside of Chicago, I was curious to learn of the existence of Pr. Matthew J. Milliner’s new book The Everlasting People. Milliner is a member of The Marion Wade Center at Wheaton College, a center dedicated to the study of C.S. Lewis, J.R.R. Tolkien, and their various influences. Also among them is G.K. Chesterton, the brilliant catholic journalist and satirist, who has become a lay-saint for many modern Christians.

Spiritual Content: Themes of Christianity, Paganism, and the places where the religions mix
Violence: Discussions on Native American expulsion and murder
Language/Crude Humor: None
Sexual Content: None
Drug/Alcohol Use: Discussion of tobacco and other drugs used by Native cultures
Other Negative Themes: None
Positive Content: Themes of understanding, history, faith, and consolation

Disclosure: This reviewer received a review copy from InterVarsity Press

I knew I wanted to get my hands on a copy of The Everlasting People the moment I read its provocative subtitle: G.K. Chesterton and the First Nations. The title and subtitle are both allusions to Chesteron’s masterpiece The Everlasting Man, his late-in-life work of Christian historicism that contextualized the entire history of humanity from within the Christian worldview. In the opening chapters, Chesterton speaks quite eloquently on the subject of Native peoples in Europe who drew early cave paintings and uses it as an exploration of the nature of human consciousness, namely that our caveman ancestors thousands of years ago were likely just as intelligent and inquisitive as we are.

“When ancient cave paintings were first discovered in Europe, GK Chesterton was baffled that this did nothing to uproot stubborn ideas about the primitave “cave man”. These paintings alone could have broken the European addiction to facile notions of progress if only they could be seen. Chesteron’s approach was to connect the art of the past with the present… These paintings offered an equivalent to the Big Bang Theory in terms of human conciousness – an inexplicable explosion of human awareness confirmed by more recent research, and applicable to reductive theories in Chesterton’s own time and our own.” (31-32)

Such an allusion made me imagine Pr. Milliner was onto something with his new book. As he says, this was part of the methodology by which he hopes to bring light to underappreciated works of Native American art.

“If rock art is evidence for human uniqueness, then recently published midwestern rock art should be at least as exciting at the discoverings to which Chesterton responded.” (32)

Having finally read it, I’m less impressed than I was hoping to be. I can’t help but wonder if The Everlasting People is somewhat misapplied in its thesis. It is an interesting and sympathetic, if somewhat muddled, text that’s more interested in exploring the history of human rights atrocities committed against the Native American peoples of the Great Lakes/Midwest region of the United States. Peppered in between these long stretches of history are small tidbits of what the book seemingly sold itself on.

The greatest insight the book brings is to the underexplored and fascinating history of the intertwining of Christianity and Native cultures. The book avoids the cliche of treating Christianity as an outgrowth of western colonialism and explores the beautiful ways in which Native people adapted Christian practices, namely Catholic iconism and liturgy, with Native legends and art styles.

Speaking of the French Jesuit missionaries who traveled to bring Christianity to the midwest, Pr. Milliner writes:

“Marquette spent the majority of his narrative describing not how he took possession of Illinois, but rather how the Illinois took possession of him. These were the Jesuits who are on record weeping in relief, not when Native persons became French but when they worshiped Christ in their own way, namely, for sprinkling powered tobacco over a crucifix.” (38)

The professor also does a wonderful job exploring the ways in which Native superstitions became ways for Christian spirituality to intermingle and blossom within new cultures, such as the Thunderbird, a creature of the upper realm who stood in opposition to Mishipeshu, a dark underwater entity that stole the children of indigenous people. Images of the Thunderbird have worked their way into Native Catholic iconography and taken on a new symbolism for indigenous peoples.

“The theme of the Christian Thunderbird has continued well into the present… To most of the Indians peoples of North America… the Thunderbird is a powerfully awesome messanger of the great God… Christianity did not eradicate old indigeonous beliefs… Rather, it supplemented and even strengthend them, providing a new, broader spiritual basis.” (47-49)

One shouldn’t judge a book by its cover, of course. Functionally speaking though, the book could’ve cut a large majority of its Chesterton references and still functioned mostly the same. The Chestertonian art analysis that made the book appealing is only a marginal aspect of the book’s overall discussion. It’s 2/3rds white guilt and 1/3rd art analysis, which might be fine if this was a 600-page university textbook and had time to flesh out its methodology, but it’s a 150-page book. We only get about sixty to seventy pages of the strict Native American art analysis.

The book even seems to hold Chesterton himself at a distance, highlighting an obscure reference I had never read wherein he muses he isn’t comfortable with the idea of a black pope.

“In a spirit of disgraceful compromise I suggested meekly that, (if not quite ready for that) I should be delighted to see a black Cardinal… Then I remembered the great king who came to Bethlehem, heavy with purple and crimsons and with a face like night; and I was ashamed.” (20)

The Resurrection of Rome, Page 320

The book comes closest to its methodology, in all places, during a response letter to the second chapter. David Hooker, an artist at Wheaton College and a member of the Catawba Nation, describes his upbringing as part of a tradition of pottery making that is 4,000 years old. Hooker shares Milliner’s and Chesterton’s fascination with understanding the history of a place and falling in love with the roots of deep-rooted culture, which makes the history of Native expulsions and wars even more painful.

Such insights, though, are secondary to entire chapters about why Chicago’s four-star flag should be changed to reflect the four great Native American atrocities as opposed to its current representation of the four great moments of Chicago history.

The result is a book that’s slightly more concerned about Pr. Milliner’s guilty consciousness than about the actual fascinating and underexplored history of North American peoples, absent their relationships to white people. It’s also not really a book about Chesterton. The history of Native peoples is extremely important, but it didn’t start in 1492 or 1619. The history of Christianity and its intermingling with indigenous peoples alone is a topic large enough that it ought to be focused on with greater clarity. The Everlasting People is a well-meaning work filled with sparring insights, but I suspect there are a dozen books that could be written expanding on the ideas that The Everlasting People merely skims past.

The Everlasting People is well meaning, but hardly required reading for either the Chesterton completionist or the person seeking a greater understanding of Native history.