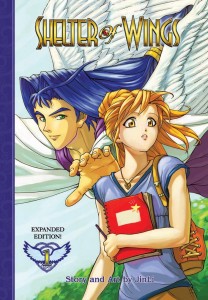 There aren’t many manga that are based on faith, the Bible, and Christianity. The few that exist are poorly drawn, not complete, or are just not very good. When I received a review copy of Shelter of Wings: The Master’s Bench from one of the authors, Lisa, I was excited to finally find a new title I could recommend, in addition to Manga Messiah. I hope you’ll purchase a copy for yourself and others who love manga or love God, or both.

Since this is a Christian manga, you will find plenty of positive content here, but there are a few things to keep in mind for younger children.

Positive Elements: Biblical values are represented throughout, such as forgiveness, kindness, and friendship. The importance of studying the Bible and spending time with God are touched upon, and so is keeping His ways in our daily lives. The battles are not gory or very violent, but more comical. The bond of sibling love is strong; even though they have their small disagreements, Sam and Jen are there for each other. For girls, Jen models good morals, from knowing how to build relationships with others to seeking God even when we don’t understand it all. For boys, seeing these strong angels who have all sorts of power bowing down and worshiping their Creator will show that no matter how tough, smart, or big your ego is, submitting to His authority humbles you. When we are weak, He is our strength (2 Corinthians 12:9).

Worshiping God and good triumphing over evil are main themes throughout, and I enjoy the fact that victory is not achieved easily. The angels have to fight these demons and even out-scheme them so they are not beaten, though we may imagine God’s army defeating darkness simply. To see the battle between spiritual forces in detail is fascinating, even if it is a manga (Ephesians 6:12).

Spiritual Content: The entire manga is based upon angels, demons, and their interactions with the natural world. Bible verses are used, but paraphrased in most situations. In fact, you don’t see the exact book/chapter/verse used, but many will recognize them. The spiritual world is shown several times, and God Himself speaks to His angelic host as well. Forgiveness, grace, and God’s purpose for our lives plays major roles and are shared in detail.

Violence: Angels and demons do fight, but there is no blood or gore shown.

Language/Crude Humor: The only kind of humor are words like “Dimwit,” “Idiot,” “Fool,” and similar language.

Sexual Content: There are no sexual jokes nor innuendos used. A couple of male characters wear no shirts, but their physique is not very detailed.

Other Negative Content: The devil is present, as are demons. Yet, the demons look like people, similar to the angels themselves (since they are fallen angels, hence the similarities). There are threats of violence against disobedient demons who fail to accomplish their tasks, but the actual punishments are not shown.

Angels-versus-demons is how the story opens up, with Satan’s army being beaten back by God’s angelic host. These demons want to release a seal that will let loose angels who turned on God. While that side-story is going on, we are taken to Philadelphia, Pennsylvania, and introduced to Jenna and Sam, who are brother and sister. Jenna is an artist who is skilled enough to have art requests from her peers. Sam cares about his sister and is very smart, even aspiring to be a tutor at their school. As demons begin to monitor Jenna, who is starting to manifest a desire to seek after God’s kingdom through her art, she becomes a target for nefarious plans to the point that the demons plot her death.

Soon enough, she meets her guardian angel, Mosirashek, who begins to explain that her life has meaning, even though she doesn’t feel the same way. Jenna thinks her brother is the best, and she is far from qualified to do anything for God. After his short introduction, Mosirashek disappears and the story focuses on several angels by the names of Temus, Eben, Zehuran, Verik, and Ramvis. As worship continues in Heaven, demons are trying to get their hands on an ancient scroll that could spell disaster for God’s angelic hosts. Jenna is caught in the middle, trying to figure herself out while she meets new friends and discovers more of her past.

It’s not easy to find manga that looks well drawn, and I’m not talking about just Christian manga. Most are done quickly because of deadlines and the fact that so many are churned out constantly in Japan. Shelter Of Wings looks majestic, and there are several pages full of detail.

Characters are introduced well, but there is a point where too many angels and demons are brought into the story at once and their names are difficult to remember. Being that it’s just the first volume, so many personalities can be a little overwhelming and distract from the main plot – which I wanted to get back to instead of watching silly antics by demons.

Battles are well done, and take a serious tone. Lives are on the line in one fight to kill our protagonists, as they are the prey of a band of demons while on an airplane. The angels are given strength as Sam reads the Bible to his sister to calm her down, and we see God’s real protection occur as they pray. I personally love this scene because it shows how God works in times of peril, even when we don’t see how with our natural eyes. “For He will command His angels in regard to you, To protect and defend and guard you in all your ways [of obedience and service].” Psalm 91:11

Jenna is a very realistic character whom you feel for and want to see develop. Her emotions, personality, and reaction to situations are similar to what most of us (though more girls than boys) would do. She is frightened to see her angelic guardian, unaware of what God wants to do with her life even though she is serving Him, and is learning how to deal with personal relationships. Her brother Sam, even though he’s not the main character, plays the role of protector to his sister and does his best to lift her up with God’s Word. While they are living with Vincent and Rosa, their grandparents, we get to see more of Sam’s personality. He whines about having to take care of his sister, but it is an expression of the feelings he has toward his father, who left him alone after Sam and Jen’s mother passed away.

In the times you see the demons training or showing off, their playful attitudes contradict their natures as agents of evil. I feel that if I am going to get to know the main antagonists of the story, I shouldn’t be seeing them act just as silly as the angels. The fact that there are so many angels and demons as characters thrown around can make it confusing at times as to who is fighting who, since their outfits look very similar.

Names can be hard to remember since many are in Hebrew, and most readers are not accustomed to seeing names like Commander Silom, Xuros, Kolom, and Ramvis. Going back to certain sections to make sure you keep up with the story is necessary, as there are two side-stories going on in addition to Jenna’s experiences. While the angels are watching over her and worshiping our Heavenly Father, the fallen ones are looking for a special artifact to mount an assault on Heaven itself.

As the story comes to a climax, we find Jenna becoming more relaxed around her newly discovered guardian, and an opportunity to learn how to improve her artistic skill opens.

For Christians who are in search of manga or anime that reflects their faith and values, Shelter of Wings: The Master’s Bench delivers. It’s action packed and full of biblical allegory and beautiful artwork. Some readers may not like the artistic license taken with angels and demons (names, appearances, dialogue, etc), but personally, I enjoyed it. For the non-believers or those just wanting to read a good story, you will find it here. In fact, you will get hooked and wonder how you can get your hands on more! I wanted to continue on Jenna’s journey, but sadly, the second volume has yet to be released as of this writing.

Remember, this is a manga and a story of fiction, not a word for word copy of one of the 66 books in the Bible. God is supernatural, His angelic host are real, and there are battles for our very souls happening every day. Most of us are just not aware of it.

Pick up a copy of this for yourself or someone who likes anime/manga. Whether it’s someone you’ve been praying for, or who just loves a great story, you will not be disappointed.

Buy The Book On Amazon!

+ Beautiful art style
+ Memorable characters
+ Faith filled, biblical and full of scripture
+ Lots of action
+ Inspires the reader to seek after God, and learn more about the supernatural

For those looking for a Christian manga that actually looks great, then look no further. Not only is the artwork excellent, the story is one that will hook you in with wanting to know what happens next. Faith filled and inspiring!

Michael is a child of God, husband, teacher, business owner, anime lover and a life long gamer. When not conquering distant world's via console, he can be found reading, watching anime or Netflix, writing, or just enjoying life as a geek in the city of Miami. He aspires to travel to Japan and possibly...never leave.