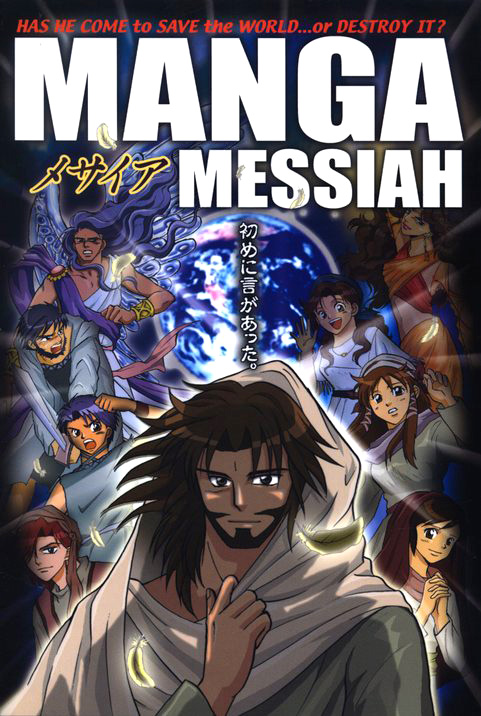 I’m a fan of manga, but only a few of them.  I never got into it like a lot of other anime fans do.  To be honest, I watched anime for several years and had no idea that manga even existed.  Remember, I live in the USA, where you never see manga anywhere, especially 10 years ago!  One day I found out about this wonderful book called Manga Messiah which I had never heard of.  Picking it up from Barnes & Nobles, I was shocked that the art was so well done.  The reason I say that is because Christians often try to do something for God’s glory, yet the final product isn’t professional.  Fortunately, that’s not the case here!

The story is based on the book of Matthew from the Bible.  It begins with the birth of Christ and ends with His resurrection.  It’s a lot of ground to cover in a manga, but the artist and writer do a really good job!  It’s not rushed, and covers the most important parts.  Again, the art shines when you see the face of Christ and His disciples.  You’ve never seen a cooler Jesus drawn than this one.

His first miracle is when Jesus turned water into wine.  I love the reactions of the people and the emphasis put on the miracle when it happens.  The words of Christ are detailed and exact, keeping the original text intact.  Your favorite miracles come to life in Manga Messiah!

There is some artistic license taken, but you can see the direct parallel to the Bible verses.  If you’ve never read the book of Matthew before, or maybe your Bible’s collected dust, then you need to pick this manga up.  As you read, page by page, the Bible will come to life in ways you’ve never imagined!

Here, you can see all twelve of Christ’s disciples.  I don’t honestly like that they are all pretty young, because I’m sure they were older. Of course, I’m no theologian but that’s just my opinion.  Isn’t it nice how they made Judas look a little shady, like he’s up to something?  If you’ve never been able to remember all their names, this manga is a great way to memorize them.

Jesus tells His disciples that He’s going to die

In this scene, Jesus tells His disciples that He’s going to be crucified.  His disciples refuse to believe it, and one even tells Him not to go, which makes Jesus turn around and tell Peter, “Satan, get behind me!”  Jesus isn’t talking to Peter in this scene, of course, but to the demon trying to convince Him (through Peter) to stop fulfilling His purpose.

The crucifixion of Christ

Christ is laying on the wooden cross, looking up to Heaven, screaming to God because He has abandoned Him.  He’s taken the sins of the world, which made God the Father turn away from Jesus so that He would take our punishment instead of us.  We will suffer in this world, but because of Christ’s crucifixion, we don’t have to suffer for all eternity.  Eternal life is forever, and, without accepting His forgiveness of your sins, you won’t enter that forever called Heaven.

The resurrection of Christ, in all His glroy

The final words to His disciples are a command and a mission: to make disciples of all nations.  Now that they themselves are disciples, they are to bring His Kingdom to every corner of the Earth–to every tribe, people and tongue.  This mission is still in effect to this day, and that’s one of the missions of Geeks Under Grace.  We are here to challenge believers towards a deeper place in God. To those who don’t know Christ as their savior, I want you to know that He paid the ultimate price for your sin.  Trust in His forgiveness before it’s too late.  Nobody is promised tomorrow, so I want you, my reader, to ask Christ into your heart right now.  Tell Him that you need Him in your life, that you need a savior, and that you want to have eternal life–a life with purpose here on Earth.

Let me know what you thought of my article.  Have you ever read this manga, or another one like it?  Are you a fan of manga, and, if so, which ones?  I would like to know, so looking forward to your comments!  I reply to every single one.

+ Very detailed in regards to scripture.
+ Artwork is fantastic, very well done.
+ The complete book of Matthew in one manga.
+ The coolest looking Jesus Christ you've ever seen!

- A little too long, but it is the entire book of Matthew...
- The disciples, Mary, and Joseph look very young. They would've been much older.

If you've never read the book of Matthew, or need a refresher, this is a great resource. This is the best manga of Jesus Christ done with excellence and professionalism.

Michael is a child of God, husband, teacher, business owner, anime lover and a life long gamer. When not conquering distant world's via console, he can be found reading, watching anime or Netflix, writing, or just enjoying life as a geek in the city of Miami. He aspires to travel to Japan and possibly...never leave.