Review – Light of the Jedi 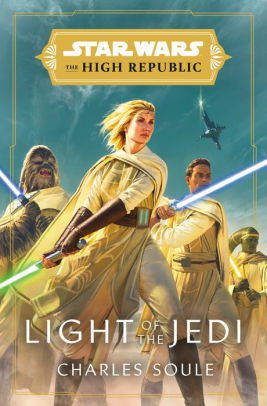 The writer of recent Star Wars comics like the well-regarded Darth Vader series has joined the newest multi-media initiative to come out of the House of the Mouse! The High Republic series starts this year with its first book, Light of the Jedi, which will grow into a larger story over the next few years.

Is this something we should be excited for? What can we learn about this huge storytelling effort from its inaugural outing?

Spiritual Content: Themes of connection and communication through an all-powerful spiritual force that connects all the peoples of the universe
Violence: Action violence and warfighting. Characters die in meteor strikes and unexpectedly swift deaths. Some are shot or stabbed, and they bleed.
Language/Crude Humor: Some mild language
Sexual Content: None
Drug/Alcohol Use: None
Other Negative Themes: Themes of Meaninglessness and Secular Humanism
Positive Content: Themes of Preserving Life and Cooperation

Star Wars: The High Republic has been an intriguing media initiative that I’ve looked forward to indulging. The series, set to run for at least three seasons of content from 2021 to 2023, is an interconnected story of books, comics, and tv shows that explores an unexplored area of the franchise’s timeline.

Set 200 years before the Prequel Trilogy, the High Republic era is described as an era of high democracy, cooperation, and exploration. The Jedi are at the height of their strength, and the Republic is expanding into unexplored regions of the Outer Rim. The Great Sith Wars of the Old Republic are centuries in the past. As new threats begin arising across the galaxy, the Jedi are going to be tested with new enemies and challenges never before seen.

The writers working on this new multi-media project have been granted a rare amount of creative freedom. That can certainly be a risk. The last time Lucasfilm gave its paperback writers some license to tell an original story, Star Wars was blessed with the infamous 19-volume Yuuzhan-Vong arc where the Star Wars galaxy is invaded by an army of genocidal extra-galactic edge-lords.

That’s not to say High Republic is a terrible idea. There is a lot of potential for original stories in this universe. Naturally, it hasn’t gone without controversy. Critics of the Disney-era of the franchise mostly met the initiative with a shrug. Siting the inclusion of controversial activist authors (Claudia Grey, Leslie Headland), Tumblr-esque art designs, and an underwhelming story pitch, many have been hostile to the initiative while applauding more fandom-centric projects like The Mandalorian.

I went into the inaugural book with an open mind. I enjoy reading Star Wars novels like Heir to the Empire, Dark Empire, and Darth Plaguious that build on the stories and add new/weird ideas to the franchise. I can set aside my purist critic brain to enjoy a fun science fiction novel!

Having finished it, I can say that I’m curious about the story direction but generally underwhelmed. As a stand-alone book, Light of the Jedi functions as a story prologue with a ton of balls to juggle. It needs to establish its characters, time period, conflicts, setting, and principal antagonists. It does all of this but lacks the meat and potatoes of complex character drama that would make most of the new faces compelling.

The first third of the book is spectacular. The story begins when a colony ship heading to the Outer Rim is destroyed by a mysterious event in HyperSpace. The wreckage of the ship begins flying out of HyperSpace and impacting highly populated worlds. Millions of people start dying. With only a few hours to stop the deaths of further worlds, a team of Jedi flying back to Coruscant descend onto one of the doomed planets. They begin working a series of plans to save lives using their incredible force abilities to change the fate of the system.

This part is incredibly engaging. The ticking clock of apocalyptic destruction hangs over the heads of our characters as they’re beset by emergency upon emergency. Small victories are won just as soon as massive death counts begin to mount. The more powerful Jedi feel thousands of souls wiped away from the force with no warning.

By the time the catastrophe has come to its head, the actual plot of the book kicks in and things slow down substantially. The story splits into two main arcs. The Jedi and the Chancellor of the Republic work together to solve the mystery of what happened in HyperSpace with the hope of preventing future tragedies.

As this is occurring, groups of scattering Jedi and settlers in the Outer Rim are left to deal with the encroachments of the dangerous Ni-Hil. This coalition of “Space Vikings” and marauders have mostly stayed off the Republic’s radar till now but their encouragements and possible involvement with the hyperspace tragedy place the misanthropic pirates in their sights.

The name Ni-Hil is clearly drawn all iteratively from the word “Nihilism” or “the rejection of all religious and moral principles, in the belief that life is meaningless”. Charles Soule, Light of the Jedi‘s author; has stated in interviews that his goal with this new faction was “to explore a villain that was truly frightening and lacked a loyalty to any ideology”.

So far, the book has established them as a potentially dangerous antithesis to the Jedi. The High Republic Jedi are expressed as radical idealists. Their first priority is the protection of the Light Side of the force and the people of the Republic. They’re the ultimate institutionalists. They believe in civilization, and they will do anything to protect their new progressive/humanist vision of the universe.

An antagonist faction solely driven by the rejection of beliefs, morality, meaning, and altruism has a lot of potential. They’re essentially playing the role of a character like Joker against a galactic government they see as arbitrary and oppressive.

That’s not all that the Nihil stands for of course. Not everyone who joins is a true believer. Plenty of them are mercenaries who see the Nihil as just another system of power and wealth creation. It does have sinister leanings behind the scenes though. It’s clear that there’s more going on with the Nihil than the book immediately tells us. The group’s leader, Marchion Ro, is implied to have a hidden past and connections to the Jedi that we don’t yet know. It remains to be seen where this story will go. Sadly, I can’t say I’m itching to find out what the answer is.

The creative team behind The High Republic initiative has done a decent job forging the clay for this new timeline so far. In the hands of Charles Soule, I’ll even go as far as to say they’ve crafted a pretty decent start to their ongoing story. Unfortunately, I don’t think they have accomplished much else yet. I’m not terribly interested in any of the individual characters or spin-off novels like Into the Dark, The Rising Shadow, or A Test of Courage.

I’ll definitely give their Disney+ show The Acolyte a chance, but I can’t say I’m dying to watch it. After all, it will essentially be an epilogue to whatever story is currently ongoing. I’m willing to see where this story heads. However, I’m not immediately invested enough to go out and buy a whole line of Young Adult novels and comics just to solve the mysteries that Light of the Jedi posits.

If you're looking for something new out of your Star Wars novel, you might find the seeds of a story you'll like in this inaugural book!