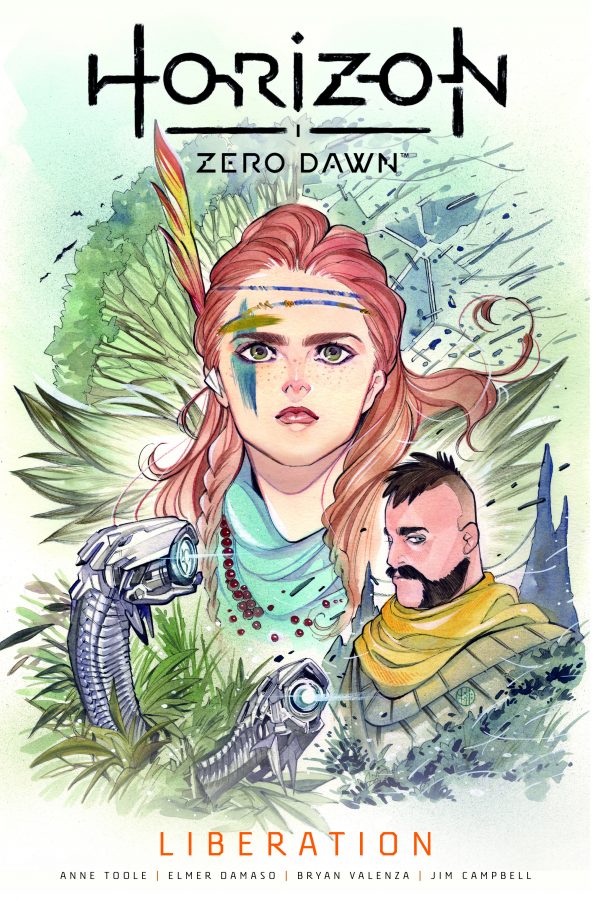 Horizon Zero Dawn: Liberation is a graphic novel story taking place during the events of the first game. While Aloy is in pursuit of some answers to a holographic picture of someone who looks like her, she takes a side trip. The writers get to spend more time with a series’ favorite character.

Violence: Use of projectiles and bludgeoning weapons against machines and humans. Some explosions. Spears and swords are shown stabbing humans. Blood is depicted shooting out of wounds.

Spiritual Content: The enemy faction takes in slaves for the sun for future sacrifice. This is implied.

Erend finds a dying campsite, the last location of his target Korl. In anger, he storms off to continue finding his sister’s killer, convincing Aloy to follow him. In order to understand, Erend begins the story of how Ersa angered both Korl and Dervahl to the point of seeking revenge. We get the chance to enjoy more of Erend and the wonder that is Ersa.

Through this four-issue comic, we see Ersa taking on things like going into an arena against a stalker bare-handed. We see how she finds a friend amongst enemies, and enemies among friends. Dervahl and Korl play your typical rebels with great strength but greedy hearts.

Ersa eventually makes her way back to her brother and the resistance with her new friend in tow, with a plan to overcome the Jiran by uniting everyone else against him.

It was a nice fleshing out to an important part of Erend’s character. Ersa herself is very similar to Aloy: strong, dependable, forward thinking, but is better with people than Aloy herself. Although, to be fair, Aloy hasn’t had the best time with people in general, being outcast from a young age.

Most of the characters and the lore stick to the game almost perfectly. It is nice to see a couple of panels and think to myself, “I think I remember that spot!”. Even if it wasn’t, the landscape and clothing of each different tribe felt like it was ripped right from the game.

I give praise to the one moment where Aloy and Erend were riding a Tallneck to traverse the land. The moment was great. Someone else manages to climb up the machine, but my ability to see it used practically brought new life to the world.

It was intriguing to have a version of Aloy that was majorly friendly, smiling and agreeable most of the time. This is in opposition to her deadpan face between choosing dialogue options.

And speaking of dialogue options, following the story couldn’t be easier. Like the main song of Kingdom Hearts, discourse and narration are Simple and Clean. There’s no pointless banter or discussion, no page-length scrolls of text to explain some pseudo-science, or unpaced plot. The writers get to the point, and waste no time.

The art blends simple, powerful facial expressions with detailed armor and clothing. Each panel of wasteland or city is different, and varied. It’s delightful to see them in a different medium besides video, because sometimes, gamers don’t get the pleasure of finer details in faces.

My overall impression is enjoyable throughout. The writers and artists did a great job. For the hardcore Horizon Zero Dawn fan, this is a great pickup. Not much else can be said for what is the equivalent of a side mission for a game.

Hardcore Horizon Zero Dawn fans will love having this.

A current work in progress while being a work in progress. Johnathan has bounced around multiple jobs until he found his passions later than most people would. After two attempts at college, he is aiming for the career as a published author, and professor of English lit. Until then, he is enjoying being a worship leader, and writing about video games for Geeks Under Grace.