Review – From Plato to Christ 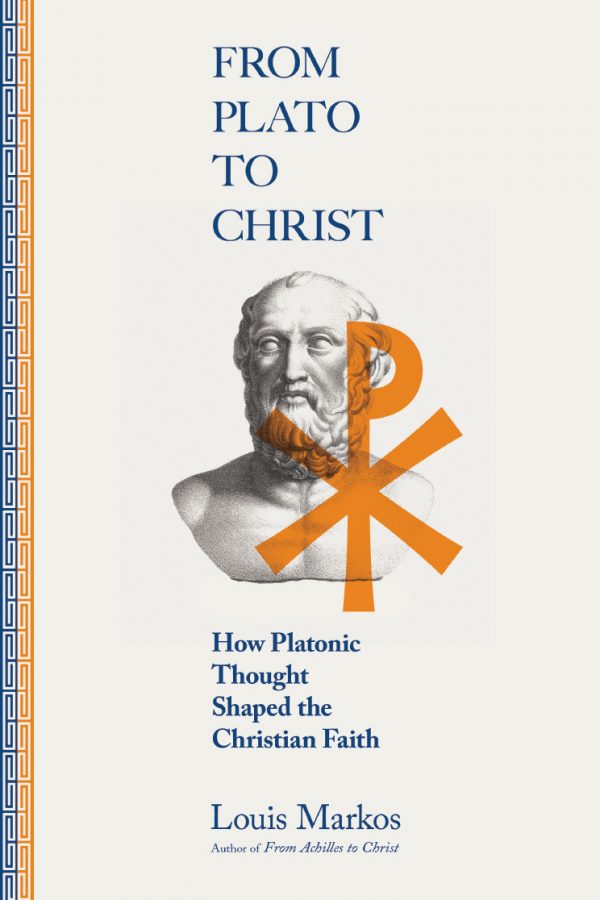 I’m starting to believe Professor Louis Markos Ph.D. is a man after my own heart. He’s a professor at Houston Baptist University who I first discovered while working on my review of The Aeneid this past summer. His essay on that poem in the book C.S. Lewis’s List was hugely influential in how I approached my own writing on the subject of the first-century Roman poem. I recently started listening to an audiobook of his 2018 book Atheism on Trial which explores the history of anti-religious and materialist philosophy over the past 3,000 years. I also received a review copy of his newest book From Plato to Christ a few months back and I’ve been slowly working through that as well.

Professor Markos has a wide background in literature and theology and his works discuss the history of the Greek philosophers, classical poets, early Christian philosophy, romantic poetry, enlightenment philosophy, contemporary apologetics, and the works of the Inklings. He’s also a contributor for The Imaginative Conservative. I can already tell you his books From Achilles to Christ, The Eye of the Beholder, and Lewis Agonistes are going to play a prominent role in my future classics reviews!

Spiritual Content: Complex philosophical examinations of how ancient greek philosophy intersect with Christian theology
Violence: None
Language/Crude Humor: None
Sexual Content: None
Drug/Alcohol Use: None
Other Negative Themes: None
Positive Content: Themes of reconciliation, faith, maturity, and growth

I am not a philosopher. I’m a journalist with an associate’s degree in audio engineering. That said, I do consider myself an amateur classicist (emphasis on amateur). I firmly believe classical education, deep rooting in classical philosophy, and a proper realistic understanding of the world are necessities for people that seek self-actualization, maturity, and the preservation of civil society.

That said, I’m a dummy. It’s for that reason I appreciate a good book that can condense complex concepts into a modern framework. Just in the past year, I read Mortimer J. Adler’s excellent Aristotle is for Everybody and GK Chesteron’s biography on Saint Thomas Aquinas. Both are wonderful condensations of bodies of work that require lifetimes of research and dedication to fully working through and understanding with any sort of reasoned understanding. I wanted to continue that path and was happy to receive a copy of Professor Louis Marko’s new book on the history of Platonism, From Plato to Christ.

Plato is most remembered now for his eccentricities and anecdotes, from his famous parable of the cave to positing the existence of Atlantis. He lived in the fourth century BC at the height of Greece’s golden age, was taught by Socrates, and subsequently was the teacher of Aristotle. He wrote dozens of philosophical treatises and letters that have survived the past 2,400 years remarkably well. They survived so well that Christians have largely embraced Platonism as a respectable lens by which to grapple with the Bible.

“I argue that there are a number of key elements of Plato’s philosophical and spiritual vision that can not only be reconciled with those of Christ but can actually increase and empower the spiritual life of the Christian humanist who desires to drink from those two streams that flow from Athens and Jerusalem to meet together in Rome.” (xiii)

From Plato to Christ walks the long path from ancient Greece all the way through Rome, the early church, renaissance Italy, romantic England, and finally into the halls of 20th century Oxford.

The first half of the book tracts the philosophy of Plato as it’s laid out in his most essential dialogs; namely, Plato’s early dialogs, followed by Republic, Laws, and Timaeus. Plato starts his career primarily as a debunker of the sophists, philosophers who sold their rhetorical skills to be used for personal benefit. By the time of Republic, though, Markos presents us with the fully formed Plato that has influenced the entire history of western philosophy. We’re introduced to Plato’s “theory of the forms” which states everything in existence is a shadow of an ideal version that exists beyond the veil of the known world. This concept tracts everything from a simple cup to the concepts of justice and the afterlife. There is an ideal cup, an ideal definition for words, and an ideal state of being.

In Republic, Plato famously lays out his vision for the perfect virtuous society where all elements of its function are constructed together to bring out the ideal state of man. In attempting to disprove the proto-nihilism of his philosophical opponents, Plato lays out the basic virtues of civilization itself.

“In a very real sense, Republic exists… as a vehicle for disproving Thrasymachus’s position. Indeed the very possibility of civilization, I would argue, rests on whether Plato can answer the Thrasymachuses of the world. (27)”

“As it turns out, in constructing his ideal republic, Plato succeeds in locating and defining not only the virtue of justice but the other three virtues that make up the four classical (or cardinal) virtues of the ancient world: wisdom, courage, and self control. The virtues that Plato fails to define in the early dialogues Plato now defines… (38)”

There are certainly controversial elements to Plato’s positive vision of the world. It’s unclear just how sincerely Plato wants to enact his vision of the perfect republic and whether or not his vision wouldn’t just be a dystopian tyranny. Many contemporary conservative and atheist philosophers, many of whom I’m friends with, have made the case that Plato’s ideas unintentionally set forth the great utopian monsters of modernity such as Soviet communism, Mao’s great leap forward, and German Nazism by placing a distant perfect standard within view of the fallen world.

As regards From Plato to Christ, however, what’s important is to view the works of Plato as proto-Christian. Plato was a pagan worshiper of the Greek pantheon, but his idealism, conception of the afterlife, and the way he abstracts principles are remarkably influential in Christian thought. For the second half of the book, Markos tracts how Plato’s works have trickled into the writings of men like Augustine, Origen, Boethius, Dante, Wordsworth, Coleridge, and finally C.S. Lewis.

“Such thinkers are generally referred to as Christian humanists – or to be more accurate humanist Christians – for they yearn to draw together the confession that Jesus Christ is Lord with the mandate that Socrates and Plato learned from an inscription at the Temple of Delphi; know thyself. They acknowledge the sovereignty of God and the depravity of man while yet believing in the power of human reason and creativity to order human society through the establishment of laws, institutions, and ethical codes and the cultuvation of arts and sciences. (120)”

For some classical theologians and poets, Plato’s ideas were taken quite literally. Wordsworth and Origen both took away heterodox theological concepts from Plato such as the preexistence of the soul before birth. Other theologians like Augustine were drawn out of heterodox and heretical Christian movements because of their studying Plato. Dante dramatizes concepts like the “parable of the cave” and “the myth of Er” to philosophically set up the backdrop for his Divine Comedy and uses them to explore the Catholic afterlife by means of an internal and spiritual pilgrimage.

“Just as the sun in the allergy of the cave represents the Form of the Good, so here it stands in for the triune God. Unfortunately, Dante soon finds that he cannot ascend directly towards teh sun; if he is to find his way back to God, he must take a far longer and more arduous route. Like Er, he must descend, while still alive, into the underworld to see the final state of souls and undersatnd the consequences of our choices on earth. (185)”

C.S. Lewis in particular was deeply affected by Platonism. He was a student of medieval philosophy, romantic poetry, and classical education; realms deeply ingratiated to Platonic thought. Plato’s concepts work their way into almost all of his books, including Abolition of Man, Mere Christianity, The Great Divorce, The Problem of Pain, The Space Trilogy, and The Chronicles of Narnia, where he name drops Plato in the final book. Lewis’s work is heavily influenced by ideas such as his virtue ethics, understanding of heaven and hell, and understanding of salvation.

Platonism and Christianity are not perfect matches, of course. Plato was more obsessed with the soul and generally disgusted with the body than a Christian necessarily should be. That said, his abstractions do map onto Christianity remarkably well and it’s clear Plato’s work was extremely important for laying the groundwork for early Christianity throughout the Roman Empire. Even now in the age of materialism, Plato’s ideals lay out an alternative philosophical groundwork from the pure rationalism of our modern age.

“The modern world, with its naturalism, its utlitarianism, and its deep skepticism, has not proven to be a breeding ground for disciples of Plato, whther Christian or secular. Bentham and Mill, Darwin and Freud, Nietzsche and Marx, Satre and Derrida have so relatived Goodness, Truth, and Beauty as to cut Western man off, not only from Plato’s forms, but from any transcendent origin or source or cause. Worse yet, in the absense of a divine standard or touchstone, not to mention a personal creator, the goal of ascending the rising path towards the beatific vision loses not only its desirability but its possibility as well. (202)”

“It is my belief that Plato was one of the greatest sub-creators of the ancient world. He may not have written epics like Homer or tragedies like Sophocles or histories like Herodetus – or for that matter fantasties like Lewis and Tolkien – but he did construct myths that brough to shimmering life his vision of a two-tiered cosmos in which the unseen world of being is more real and substantial than the world of becoming that we perceive, day by day, through our senses. (217)”

From Plato to Christ is an excellent introductory text to the history of Platonic thought and Christian Platonism that ought to be sought out by young philosophically inclined Christians.