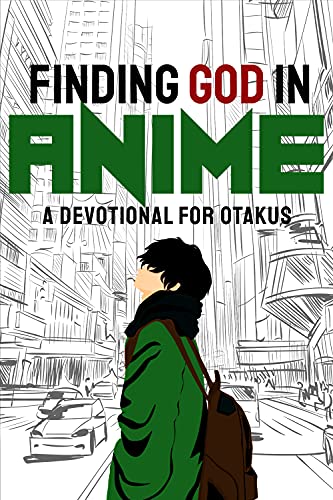 Finding God in Anime is a labor of love from various otaku Christians, including GUG’s own Danny Andrade. The authors weave spiritual lessons from anime events/characters and Scripture. While a good idea, this could be a very niche book, appealing to the small but growing audience of Christian otaku and weebs. Do the cheesy chapter titles take away from the spiritual truths, or are there deep nuggets of knowledge hidden in places like Naruto?

Since this is a devotional, there is no objectionable content.

The reviewer received a copy of this book from the editor.

Finding God in Anime is a pleasant read. People familiar with the source material will immediately connect points the authors make. For those who have not seen the anime discussed, the writers include small summaries of necessary characters and events. These summaries directly contribute to the moral of their section and are seamlessly woven in, never taking up too much space or time.

Each chapter deals with a different topic and anime than the last one. These sections range from two to five pages. Despite the short length, each bite-sized devotional manages to convey its point with specific examples from the show and Scripture, always giving readers something to ponder.

While there are no deep, theological truth bombs one would find in the works of a pastor or academic, these short and sweet devotionals are the perfect size for early morning or pre-bedtime reading. Otaku and weebs can find their spirits strengthened by a medium they intimately understand, instead of wading through dense academic vocabulary to find the point.

Most of the chosen anime occur over and over. Some authors write multiple snippets about one show; other anime have blurbs written by multiple authors. The majority of shows covered are what fans call “mainstream” – they are loved and enjoyed by almost everyone, including people not into other anime. The most popular include Haikyuu!, My Hero Academia, Attack on Titan, and Sailor Moon. However, a few more obscure anime make their way into the pages, as well.

Some people do not enjoy “mainstream” anime simply because everyone else is watching it, and they want to stand out from the crowd. However, in a work like this, appealing to the largest possible audience is a boon. The authors released Finding God in Anime for free on Amazon Kindle, wishing only to bring other otaku closer to the Lord. Because that is the case, they want to discuss works many people have seen. This way, a large population could come to know God through an unlikely source.

The inclusion of various anime also gives anime-lovers an excuse to add more shows to their to-watch pile. I found myself interested in new anime (Cat’s Eye) because of the way these authors connect it to Scripture (unfortunately for me, seeing as my to-watch list is already far too long!). Even when I had already seen a show, I found myself thinking about it in a new light after reading what other Christians had to say.

The book is written informally, as if the author is talking directly to the reader. This intimacy gives the tome a feeling of familiarity, almost a safe space. Readers can learn and be convicted through the words. However, those words feel more like they are coming from a concerned friend than a harsh preacher.

Because this informal volume is self-published, there are a number of slight errors which made my editing brain cringe. Some sections were composed of a single paragraph two pages long, even though there were places to break it apart. The occasional spelling error, hyper-long sentence, and grammar mistake distracted me from the message and forced me to reread certain sections.

Each blurb began and ended differently, which is understandable since this is an anthology. However, certain authors had very distinctive ways of ending their sections, which could have, and arguably should have, been applied to the rest of the book. For example, one writer ended each section with a prayer; another added steps for further study into the subject. Had these application steps been added to the other sections, the book would have felt more cohesive, and I personally would have gotten more out of the reading, spiritually speaking.

Despite these setbacks, I thoroughly enjoyed Finding God in Anime. Before I joined Geeks Under Grace, I found myself discovering God in strange places, like Sherlock and The Promised Neverland. Reading this book reminded me there are other Christian nerds, geeks, otaku, and weebs out there just like me, finding God even in anime. If you’re an anime or manga lover and need a spiritual pick-me-up, check out this book. It’s short enough to read the whole thing in one sitting, and the chapters are small enough to start or end your day.

Check out the free Kindle version here to get started: https://www.amazon.com/gp/product/B094QCFPHQ?ref_=dbs_p_mng_rwt_ser_shvlr&storeType=ebooks

+ Moral lessons from favorite shows
+ Informal tone, like talking to a friend
+ Excuse to add more anime to my TBW list (also a negative)
+ Free for Amazon Kindle!

Finding God in Anime will not show you the truths of the universe or even uncover deep theology of which everyone else is ignorant. However, it is a fun read to uplift and encourage Christian otaku and weebs in their faith.