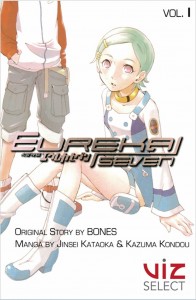 Note: This book was read through the Book Walker app — a digitalized application for PC and mobile devices, provided by Book Walker.

Known in Japan as Psalms of Planets Eureka seveN, Eureka Seven began as a 50-episode anime series which first aired for English audiences in 2006. After a successful reception, the franchise spun off a manga adaptation, light novels, and video games.

Positive Elements: Renton is not naturally gifted like the rest of the Gekkostate, but he has fortitude unlike anyone else. Through using his unique talents and self-expression, he’s able to showcase his abilities and learn to gain confidence in himself. Perhaps those special abilities are due, in part, to Renton’s kindness—treating even his boards and the LFO mechs with gentleness and consideration. Despite being a ragtag bunch, the crew of the Gekkostate have a strong sense of comradery. More than anything, they challenge each other to grow, and Holland, especially, finds ways to challenge Renton’s maturing abilities. There’s something poignant in the manner that the crew trusts each other. Contrasted to the oppressive militant state, the Gekkostate symbolizes the inherent freedom of human worth, teaching Renton to appreciate the simplicity of living in every moment.

Spiritual Content: Eureka seems to have an innate connection with the Nirvash mech, though whether it’s more psychic or scientific has yet to be revealed. Three judges are shown wearing religious attire reminiscent of the papacy, though their roles are left obscure.

Violence: A few aerial fights result in explosions and the most minor of mech damage. The combat scenes are difficult to follow, which inadvertently masks most of the violence, reducing the panels to images of missile-fire, bits of flying debris, and mushroom-cloud-esque explosions. While a few LFO mechs are obscurely destroyed, the fatality count goes unacknowledged. Eureka strikes her head during a mech fight and is rendered unconscious. Renton receives his fair share of comedic bumps and scraps—smacked on the back of the head with a flying object, pelted by canned projectiles until his face is left bruised and swollen, and piled on less-than-delicately by three rumbustious children. Blood is used exclusively for humor, with Renton bleeding out his nose due to his crush on Eureka. A small blood spatter tells of an off-panel smack.

Language/Crude Humor: Four uses of h***, three of d***, and one each of a** and the abbreviation B.S. “Oh my go—“ is left unfinished. A few tame insults are thrown around, like “moron.” Renton throws up (off-screen) during an LFO flight, but the moment is recollected (and earns him the appropriate nickname “barf boy”).

Sexual Content: Renton’s crush on Eureka ranges from innocent blushing and naïve proclamations of love to more innuendo-inducing gags (usually with the assistance of other characters, who use his “crush” against him). A crew member lifts Eureka’s dress to reveal her underwear (trying to distract Renton), causing Renton to have a nosebleed. In an effort to improve his romantic life, Renton picks up a couple of magazines for tips — these consist of cliché tropes and superstitions (cherry-eaters make good kissers, and wearing red is a sign of sexual allure, for example). Eureka and Renton’s proverbial relationship walks a fine line between innocent and awkward, as their ages are 30 and 14, respectively, and Eureka has three “children” – whether biological or otherwise remains to be seen. Renton isn’t dissuaded in the least, though the relationship is clearly one-sided. Eureka’s children warn Renton not to “think nasty thoughts” about her. A female crew member is shown in a bath towel, revealing generous cleavage (Renton considers the “soft and smushy” something hidden beneath the towel). When not in her towel, this crew member sports a cleavage-revealing shirt with a bare midriff and poses for pin-up magazines in her spare time. A male character comments on a female character’s underwear when the wind blows her dress up. She retorts with a reminder that said male character once flashed her. Holland is shown without his shirt.

Drug/Alcohol Reference: Beer is mentioned. A character is shown smoking a cigarette briefly.

Other Negative Content: Renton comes across disrespectful at times, particularly toward his grandpa and other authority figures.

Renton Thurston has a lot of expectations thrust on his young soldiers. As the son of the legendary hero, he’s seemingly destined for greatness—in the military (says the government), as a junkman (says his grandfather), as a hero (says the populace).

But Renton would rather lift — aerial hover-board — like his idol, the rebel Holland Novak, who turned his back on the oppressive military government and formed his own renegade group, Gekkostate.

When an LFO mech, Nirvash, literally falls on his doorstep, Renton meets the enigmatic Eureka—a girl with a special connection to Nirvash and also a member of Gekkostate. In an effort to repair her mech, and admittedly smitten with Eureka, Renton agrees to join her and the Gekkostate in the fight against the government. There, he comes face-to-face with his idol, Holland—who’s admittedly not all he’s cracked up to be—and begins to discover truths about his own special connection with Nirvash.

Having never seen the original anime series, I have little to compare this manga to in terms of canonicity. However, when Book Walker gifted me several digital manga to review, this one snagged my attention and — at the recommendation of some fellow otaku — I decided to check it out.

Eureka Seven isn’t anything remarkably new in terms of archetypes and narratives. The namesake character, Eureka, is easily the most interesting of the bunch in terms of novelty—an enigma who neither smiles nor frowns, seemingly androidish at times, and yet somehow neither cold nor mechanical. She carries an aura of mystery to her—an utterly spiritual being of sorts whose connection with Nirvash brings to mind characters like Nausicaa of Studio Ghibli fame.

The remainder of the cast are the usual assortment of misfit heroes who become uncomfortably more human the closer Renton gets to them. They’re easy to relate to, in this regard, with just enough quirkiness to make them interesting and differentiate them from each other.

As for Renton… His is a story I’ve read time and again, an archetype very popular with shonen manga: a young hero rebels against the way of things in order to bring about change. Reading his dialogue (witty and well-written though it is), I couldn’t help but hear Bryce Papenbrook’s portrayal of Eren Yeager from Attack on Titan; particularly with Renton spouting lines like: “A life where it’s enough to be fed? A life lived just to die in the end?” (Compare that to Eren’s “All we do is eat and sleep. We have the peace of mind of livestock.”)

Unlike Eren, though, Renton also has an awkward, boyish side that’s equal parts reckless and helpless romantic. Most all of the humor in the manga comes from one of these traits or the other, particularly once Eureka gets involved and Renton’s one-sided, unrequited crush leads to a number of visual gags.

Though I’ve seen many protagonists like him, I like Renton enough. He’s one part Eren Yeager and one part Naruto, just without the obligatory self-confidence of most shonen heroes. That alone makes Eureka Seven’s formula refreshing, as Renton is forced to wrestle with something that many heroes have handed to them by default.

At its core though, Eureka Seven is inherently familiar. The characters and plotlines fall into archetypes and tropes, with the most original aspect of the plot being “lifting”—or air-surfing—a hobby-turned-combat-technique that involves hovering over special concentrations of air. Everyone from the Gekkosquad to the LFOs use these hoverboards, and I hope to see this concept evolve and take a more center-stage in the story as it progresses. It’s genuinely interesting and deserves an even greater spotlight.

In motion, lifting is a beautiful, and Kazuma Kondou captures the freedom and grace of the hoverboards through kinetic illustrations and dramatic angles. At times, the action can put a strain on the pacing, as obscure shots make it difficult to center the characters and the repercussions of actions, forcing the reader to slow down and backtrack. That said, there’s no denying that the illusion of motion captured within the panels is a visual treat.

Kazuma Kondou adds layers of world-building to an otherwise obscure culture with his detailed line-art. As far as volume #1 is concerned, questions concerning the history of Renton’s world go largely unanswered. Concepts such as “taper,” the substance used to surf on the air, are not explained in detail, though comprehensible enough given their context. Other important questions, such as where the story takes place—is it a planet? modern-day earth?—are left up to the reader’s discernment.

New names and concepts come fast and furious, which makes the reading forcibly slower in places, but the staples of the plot are easy to grasp by the end of chapter one. By the second chapter, the story feels substantially well set-up for the unfolding narrative. Characters are easy to keep track of, with unique designs making the identification process simple. Tight, palpable writing gives the characters believable voices, and it’s hard not to hear the vocal rhythm of an anime dub while reading them.

Having never read a mech manga before, I wasn’t sure whether I would be engaged enough to enjoy Eureka Seven. Pleasantly, that wasn’t the case. The final 10 pages take a surprisingly dramatic turn—one interesting enough to drive the plot deeper and leave a clincher finish. By the end, I was convinced to pick up the next volume.

Eureka Seven doesn’t reinvent the mech genre, but there’s something comfortable in its familiar feats and faces. Featuring some intriguing lead characters, tight writing, and detailed atmospheres, it holds the reader’s attention, even if only on a page-by-page basis. A strong finish ensures that readers are likely to come back for at least one more volume… if not turn entirely to the anime for a more thorough experience.

Eureka Seven doesn’t reinvent the mech genre, but there’s something comfortable in its familiar feats and faces. Featuring some intriguing lead characters, tight writing, and detailed atmospheres, it holds the reader’s attention, even if only on a page-by-page basis. A strong finish ensures that readers are likely to come back for at least one more volume… if not turn to the anime for a more thorough experience.