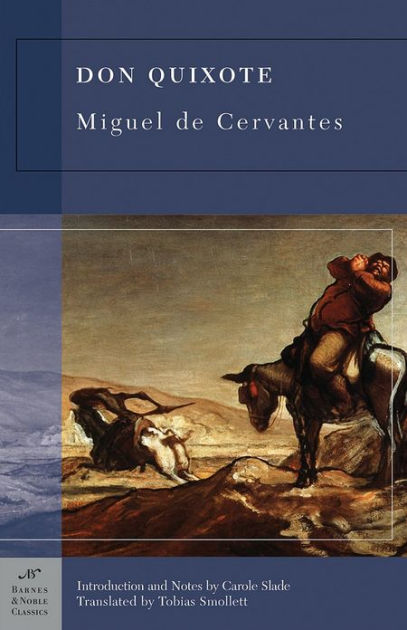 Unlike Shakespeare, Miguel De Cervantes isn’t the household name that many classical post-renaissance writers and play writers are. That said, Cervantes is responsible for one of the most influential and beloved books in the history of world literature. Don Quixote is a long-winded comedic tome, yet hits hard with some of the deepest themes about the nature of storytelling and illusion that you’ll ever read. It has inspired many people, including Terry Gilliam, the film writer of works such as Monty Python and the Holy Grail.

Spiritual Content: Most characters we meet are Catholic and Christianity is referenced constantly.

Violence: Characters duel, brawl and fight to the point of bruising. No brutal gore or severe violence.

Other Negative Themes: None.

On May 19th of this year, Terry Gilliam reached the end of a huge personal journey with the release of his long awaited film The Man Who Killed Don Quixote. The critically acclaimed director of films such as Brazil, 12 Monkeys, Fear and Loathing in Las Vegas, Fisher King and Monty Python and the Holy Grail was finally able to release his passion project after a two decade battle with sick actors dropping out of lead roles, finances dropping out, insurance companies holding the rights to the film from him, and a lengthy last minute battle with his producer over ownership of the film that nearly delayed the premiere. This story is itemized in the brilliant documentary Lost in La Mancha, which details his attempt to shoot the film with John Hurt and Johnny Depp in the early 2000s. The story as a whole is one of profound willingness to go the distance for art in the name of passion. Gilliam really is attracted to the themes and ideas that the original novel put forth in it’s day. In his noble attempt to express his love, he put nearly a generation of time and patience into achieving his latest film. As it has yet to receive a full release, it’s hard to say what that will look like until it gets its wide release later this year. For now, I think the pertinent thing would be to go back and look into the original book to explore why such an influential director would go so far out of his way to make an adaptation of it. This was my mission, and as of February of this year, I was exploring the depths of one of Spanish literature’s most treasured books. I officially finished last week.

Don Quixote is a long book. Technically, it’s two intermediately long books with small typing, but as a whole it’s a nearly 900 page book. The audiobook version I used for a significant portion of the reading was itself 35 hours in length. Reading this book was an undertaking up there for me with reading T.H. White’s Once and Future or the Bible, which both took me significant periods of time as well. Yet, as the final moments of the book drifted past me, what overtook me was less a sense of accomplishment or relief, but melancholy. Don Quixote as a text is properly understood as a comedy, but its final moments measure to the profound status of tragedy as our heroes’ quest is weighted by the central character’s realization of the foolishness of his actions.

One must look to the past to understand the bizarre story of Don Quixote. Thankfully, my copy from the Barnes and Noble Classics Collection comes with an extensive prologue that details much of the history that makes the book contextually more interesting. Following the Renaissance, Medieval Europe went through a profound period of change and progress. The traditions of the past began to slowly erode in the face of gradual technical innovation, colonialism, and international trade. This left much of the old world with a great deal of anxiety. Change always elicits fear. as it presents the possibility that society is moving in the wrong direction. While we can look back at history now with a more powerful critical eye, let us not allow hindsight to inflate our pride. These people were legitimately nervous about their place in an ever-changing world. As a coping mechanism, many people turned to escapism in books, much as they do today. At the time, the preferred genre of choice were the famed Books of Chivalry. They were romantic and fantastical retellings of the stories of Medieval Knights transformed into mythic tales of slaying monsters and saving women. Author and playwright Miguel De Cerventes took issue with the popular form and sought to satirize the genre as he seemed to feel that the books themselves were escapist nonsense that was more harmful than good. With that, the beginning of his story of Don Quixote starts with a 16th century aristocrat who reads Books of Chivalry for so long and with so much passion that he goes mad. Full of vim and vigor, he dresses himself in a rusted suite of armor, mounts a withered old horse, and begins riding across then-modern Spain while attempting to right the wrongs of the world. If someone were to try and write a modern interpretation of this, it would essentially involve a man reading Louis L’Amour western novels until he decided to strap on a revolver and a cowboy hat before walking around a major metropolitan city and calling himself a gunslinger.

The duration of the book’s significant breadth concerns itself with documenting the various misadventures of the Knight Errant as he galavants across Spain. In the book’s most famous scene, Quixote and his trusty assistant, Sancho, come across a field of windmills which the mad Knight immediately misidentifies as giants. Quixote proceeds to storm the giants before a fan humorously knocks him off  his horse. This ends up being the central conceit of the novel and it’s comedic tone. Through his misadventures, Quixote constantly wraps himself in situations that involve him winding up in over his head. Considering the book’s length, we come to see a great deal of these misadventures and gradually watch them change and evolve with our other lead characters. By the second novel, our “hero” has become a renowned celebrity and that begins to factor into the adventures as people begin to interact with him differently. This all feeds back into the previously referenced tragic ending. It is a notably dower ending for such an otherwise gleeful chaotic romp, but it reflects the fascinating subtext of the book that has elevated the story into the realm of one of World Literature’s most revered texts.

There is seemingly a thematic clash between the book’s text and subtext. Cervantes makes it very clear that Don Quixote, as a character, is a fool who causes problems for himself and others. Beyond that text, however, there is a fascinating current running through the story that contradicts this. As Quixote grows into his role, he ends up developing a powerful ability to use his title to help people. Bumbling fool and all, by the end of the book the supporting characters, the story, and the reader genuinely love the lead. That is why the ending hits with such a melancholic feeling. This may seem like a contradiction but, intentional or not, it’s an honest depiction of why the Books of Chivalry were popular in the first place. People were inspired by the stories of Knights Errant storming across Europe slaying monsters and saving women. They weren’t true stories, but they were archetypical expressions of our deepest values as humans. It goes back to what Joseph Campbell described in his book Hero With A Thousand Faces. People are attracted to myths, legends, and religious stories because they teach us things about ourselves. These are stories we as a society need to survive. When we don’t get them from our church, we’ll make them ourselves and drown ourselves in fantasy stories until we go mad. Think about how in our modern world as our society grows farther from God and common decency, and how disagreements of seemingly minor problems like story issues in recent Star Wars movies can send people into violent rants.

The full tragedy of Don Quixote is the reveal of the place in life where honesty about the nature of life breaks down our illusions and we’re forced to admit the things that inspire us aren’t true in the literal sense. It’s a heart breaking realization that destroys our foolish hero. Yet, when he was at his height of absurdity, the confidence that the title of Don Quixote gave our hero inspired those around him. He reunited lovers, entertained the masses, and brought out the best in people around him. At his best, our lead was nothing short of an excellent orator and a wise philosopher, despite his madness. As such, Don Quixote is at once a totally honest comedy and a tragedy. Considering Terry Gilliam’s filmography over the course of his career has been all about the nexus of illusion, dreams, and reality, it’s no wonder that Don Quixote would inspire him so deeply. It’s no wonder he’d be patient enough to wait two decades to show his vision to other people. Don Quixote’s dream is all of our dreams. We are all inspired by grand legends to be better. We all dream of being more than we are. In that spirit, let us all do our best to slay our giants, yet know enough to know when they are actually windmills!

+ Fun, if Highly Contextual, Comedic Prose
+ Fascinating Themes About the Nature of Illusion and Storytelling
+ Melancholic and Emotional Ending

- Excessive Length May Be Difficult for First Time Readers

Miguel De Cervantes' critically acclaimed novel of the Knight Errant of La Mancha is one of the most important pieces of world literature and a wonderful piece of comedic satire. It might be difficult for first time readers, but people seeking complex themes and fun chaotic books would do themselves good to read through this!