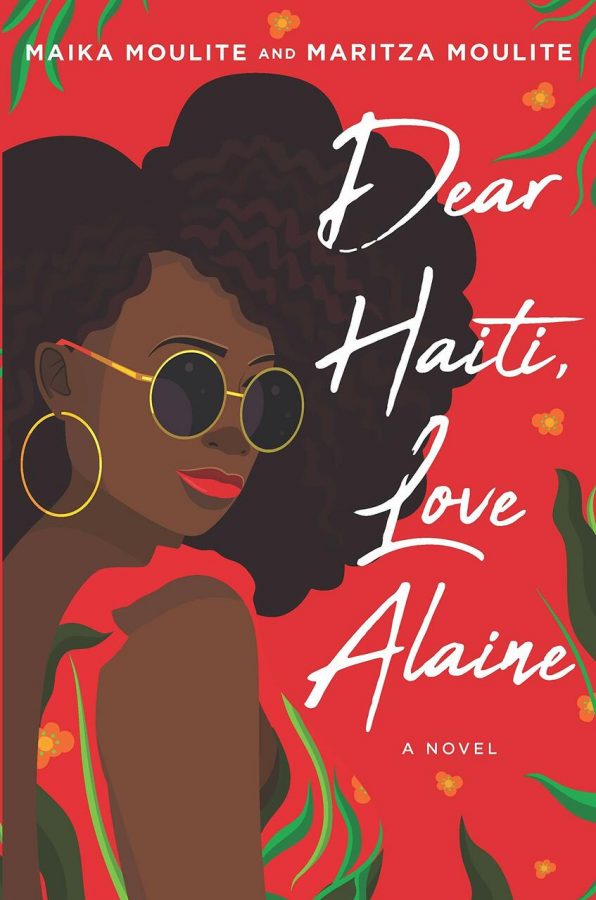 Behold, within the crude photo above is my wife invading one of the shelves of my five bookshelves. After she read the Crazy Rich Asians trilogy, she decided that she wanted to read more literature by Asian authors. After reading Pachinko and The Good Earth, she began to expand her palate globally. While passing through a Barnes & Noble (when establishments like bookstores were open pre-COVID), the cover of Dear Haiti, Love Alaine caught my wife’s eye. While there is much marketing discourse revolving around the viability — really, social science — behind book covers, the boldly brown girl proved irresistible. After finishing it, she thought I should read it as well, to get in better touch with my Caribbean roots.

Positive Content: I had prepared myself for what I’ve become accustomed to experiencing in young adult literature, such as the kind of profanity one expects from unsupervised middle-schoolers and sexual tension thicker than the hardcover text itself. Surprisingly, it is tame in comparison to other YA lit that I have reviewed here at GUG. Additionally Dear Haiti, Love Alaine name-drops a host of important actors in the Haitian Revolution, all of who make for fascinating historical reads: Vincent Ogé, Jean-François Papillon, Léger-Félicité Sonthonax, Benoit Joseph André Rigaud, Dutty Boukman, Cécile Fatiman, Alexandre Sabès Pétion, Henry Christophe, Jean-Jacques Dessalines, Charles Rivière-Hérard, and of course, Toussaint L’Ouverture. The authors, the Moulite sisters, go out of their way to challenge readers to find more information on the ladies Marie-Madeleine Lachenais and Marie Louise Coidavid.

Violence: The novel opens with the cross-face slap heard ’round the world. Otherwise, violence is sparse. A teenage girl suffers a miscarriage, and a character drowns.

Language: I cannot recall any swears that were not censored. For example, a single F-bomb with asterisks comes to mind.

“You will keep your eyes, ears, and legs open for anything ‘important’ you hear and of and from Rivière-Hérard.

The main character, Aline, nonchalantly talks about a sickly boy who has a crush on her. She also spends time doting about an older man she finds cute. A scene not unlike a date does take place; this would not be a YA novel without some of the sappy stuff.

A primary driving force of Dear Haiti, Love Alaine, however, is the lengths that a character is willing to go to escape her rapist. The novel conveys this information subtly, but it is no less present.

Spirituality: The way in which this character escapes her rapist involves Haitian Vodou. The incantation involves a life for a life. The consequences of this spell reverberate in ways that characters must come to terms with. Then again, do they? It is a tradition in Afro-Caribbean literature to be ambiguous about Voudou’s effectiveness.

Racism and Bigotry: The text is actually relatively free of content dealing with outright hatred or discrimination. It alludes to inequality through a non-profit called PATRON PAL, an organization that exists to help children in need in such a way as to prevent Haitian dependency on foreign aid. The impetus to move from post-colonialism toward self-determination is an uplifting message… until it is not.

Dear Haiti, Love Alaine begins with protagonist Alaine Beauparlant illustrating the sundries of existing as a seventeen-year-old student at an exclusive Catholic school. Most importantly, though it is difficult to discern its importance during a first-reading, she describes the nature of her strained relationship with her divorced parents. I have to say that I was bored reading this elongated setup, and that authors Maika and Maritza Moulite benefitted from my “first 100 pages” rule.

Things begin to get started by page forty-five, where the Slap Heard ‘Round the World takes place. Alaine’s mother, Celeste, host of GNN talk show Sunday Politicos strikes Florida senator Andres Venegas during an interview, after he crosses the physical boundary of touching her forearm. I personally believe this to be an appropriate response. A non-consensual touch, especially one initiated by man literally protected by political office, is a violation, an assault. I teach my children, my daughter, to defend herself against the violent act that it is. For the purposes of the novel, though, characters are compelled to interpret Celeste’s outburst as inappropriate.

This Slap Heard ‘Round the World takes place on live television, where everyone who is anyone can see. It unfortunately precedes with Career Day at school, a grandiose presentation project. Alaine’s rival puts on a show that mocks Celeste concerning what NOT to do in a professional setting. In retaliation, she pulls an Addams Family for her presentation, featuring a faux decapitation that goes awry. The fake blood that was supposed to spray on her rival actually targets her hypochondriac would-be crush, sending him into shock. Of course, Alaine earns a suspension from this prestigious academy. Her concerned father then sends her to Haiti to convalesce.

It is not until page 100 that Dear Haiti, Love Alaine drops the megaton that drives the main plot of the novel. Alaine comes to terms with this compelling event for the next seventy pages, up to the point where her tati, Estelle, bestows upon her mother’s diary: “It’s time you knew what stock you come from,” she says (174). The Moulite sisters structure their novel in an epistolary style, but it is not until this moment, where the main voice changes from Alaine to Celeste, that the novel becomes a true collection of epistles. Celeste’s promotion to the role of deuteragonist is the novel’s high point. Alaine’s papi Jules, mami Celeste, tati Estelle, the sisters’ house servant Rosaline, and Andres — yes, the man who would become the senator Celeste would slap on live television — are all accounted for in these diary entries that paint the picture of how all these characters are involved with the megaton event. Alaine then proceeds on a quest to resolve what she perceives to be the unifying conflict.

By the time I arrived at the end, I enjoyed my time with Dear Haiti, Love Alaine. It helps that the book effectively dips its toe into a few of my favorite genres; readers of YA may experience their first exposure to historical fiction and magical realism. However, I also prefer that my novels grab my attention within the first few chapters rather than the first few hundreds of pages. Had I not promised my wife that I would read this book, I might have given up. I am glad that I did not.

+ Unexpected magical realism... or is it magic?
+ Intimacy of the diary effect the epistolary technique provides
+ Deals with the pain of when relationships go wrong and the resulting fallout

Dear Haiti, Love Alaine is a good novel that takes its time arriving at the best parts.