Review – Dawn: A Proton’s Tale of All That Came to Be 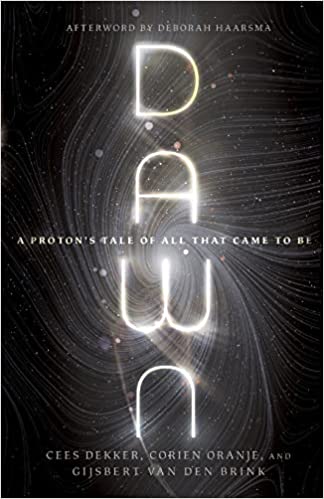 I got into a little trouble last month when I attempted to delve into the controversial subjects of evolution, faith, and how they intersect as ideas. For many, religion and science are about as far apart from one another as humanly possible. Many fundamentalists and atheists are quite happy to keep the relationship that way.

Some Christians, though, speculate about the way these ideas can and do intermingle and try to find complicated, if unconventional, methods by which the two can be fully resolved to one another – either by changing their exegetical approach to Scripture or by interpreting the more outlandish and provocative ideas in Scripture as non-literal.

Three academics, the authors of the book I will be discussing now, have made an effort to explore how the Word of God can fully be resolved to what science tells us about reality, and they tells that story from the perspective of a single Proton.

There have been few premises that have really caught my eye more notably than Dawn: A Proton’s Tale of All That Came to Be. Following a retelling of the natural history of the world and the Bible, the novel purported to be a complete history of the world told through the perspective of a single proton. It floats across time, space, and history; observing major events from the Bible and offering a scientific perspective.

“By becoming a part of atoms and molecules that turn up at some of the universe’s most important moments, our friend Proton witnesses emerging galaxies, the origin of life, its evolution into a wild diversity of life forms, the first human beings, the birth and life of Jesus, the beginnings of the Christian church, all the way up to the present day. Through it all, the mysterious, seemingly unbelievable plans of the Creator continue to unfold.”

The work is a collaboration by three Dutch academics: physicist Cees Dekker, writer Corien Oranje, and philosopher Gijsbert van den Brink. The goal for them seems to have been to find a way to explore the truth of Christianity and the Bible through the lens of contemporary science.

I will sadly say that I found Dawn to be a disappointing read. It’s not bad by any means, but the sheer ambition of its premise promised more than this text likely could deliver. If one wants to see a full outsider’s perspective on the faith from the perspective of the material world, one expects a certain level of deeper introspection and novelty. You could write a philosophical work longer than Tolstoy playing with these ideas.

The book I received was quite short and filled with many moments of wonderful insight and emotion. As Gijsbert writes, “this was not a project with high literary ambitions. In fact, it had to be a story in rather plain language.”

A Story of All That Came To Be

As the title suggests, the story begins with the formation of our narrator “Proton” in the moments after the Big Bang 13.8 billion years ago. Proton spends the first several billion years of its existence in a transformation of primordial change, conglomeration, and evolution. It is bounced across the universe, through the heart of a star, and into the orbit of a rock covered in lifeless proteins that will eventually create the first cells, oceans, dinosaurs, and eventually humanity.

“Two strangers told me about the past, about the beginning of time and space many eons ago. They told me about someone they called the Creator and to whom I apparently owed my existence. It was a bizarre story, and I found it hard to believe” (2).

Eventually, humanity finally does appear. At this point in history, Proton has found itself part of a carbon atom making up a wooden fence near a small African tribe. When the incarnation of the Creator appears before two of the tribesmen — Womantu and Maisha — a kind of spiritual awakening sets forth across the human species, which is broken when the humans are tempted by an unseen force to drink from a water well that the Creator specifically told them not to.

From this point onward, the story of the Bible plays out mostly as normal and specifically notes the philosophical importance of the stories of Abraham, David, Jesus, Peter, and John.

The book is best understood as a work of speculative fiction, assuming one wants to charitably entertain its ideas. Readers will notice that its account of history is a direct merge of the Genesis Creation account combined with the Big Bang and Evolution. This might seem controversial, but the book is smart enough to engage with the philosophical problems this combination creates.

Following the devastation of the dinosaurs by an astroid 66 million years before the emergence of humans, Proton laments the bizarreness of why the Creator would bring such a beautiful, complex, and amazing world of fantastical creatures to light only for them to die. How and why would God do this?

“I know how beautiful it was. I admit it indeed looks rather pitiful to what it used to be. Still, I cant imagine that this will get out of hand. Perhaps the creator needed this step to make something new, something even more beautiful” (43).

The book’s unique blend of materialist science and Christian metaphysics opens up a lot of interesting debate questions that the authors themselves are seemingly sensitive towards.

For one, it acknowledges that creation is a good thing in and of itself, even if it is compromised by death. Most theology coming out of Reformed and Evangelical circles would contest the idea of death before The Fall. However, this book is sensitive enough to propose that a world of evolution, carnivores, survival, and conflict is still a lush, beautiful, and worthy world — nothing short of a miracle that glorifies the Creator.

Secondly, it suggests that pain and suffering are transformational forces that glorify God. In the early millennia, Proton is fearful of the changes that the slow unfurling of the universe imposes upon it. When it is just part of the Sun, it fears that crossing the horizon and being ejected out into space will be its end, but it just proves to be necessary for Proton to fulfill the Creator’s will.

“I had no idea that the Creator was completing his preparations and had begun building the house for the special creatures he had in mind. I had no idea that we would be allowed to be part of this, of the plan he had designed before the beginning of time” (25).

Its most valuable idea is in how it explores the fear of God’s departure. In the vast periods of time between God’s incarnation in the garden and Christ’s incarnation in Judea, Proton comments about the doubt and confusion that separation creates. People begin to wander because they do not know what is happening to them or why. They do not understand how their Creator can leave them alone for thousands of years to wait, growing seemingly ever farther from Him.

Much of the novel meditates on these bittersweet epochs between moments of transformation and salvation, moments when the glory of God clicks into place and the world is transformed to glorify Him. The book is well aware of the pain and discomfort of these long swaths of time and how it affects people, but it falls back into scientific explanations to remind us that waiting is part of creation.

Proton has watched this adventure play out for billions of years. It is more acutely aware of the fact that time and space are just mechanisms that allow the Creator to shape the universe through His will. God’s will prevails. Whether it is the aftermath of the Cretaceous Period, the aftermath of the Fall, the time of the Babylonian Captivity, or the long millennia after Christ’s ascension, all is working towards the final victory, even though we may not feel like it.

Dawn largely falters on its wasted potential. Getting to see the entire history of the universe from the perspective of a proton offers limitlessly story possibilities, yet the book used it as a detached narrator that offers limited commentary on the narrative of the Bible. Proton has no agency in the story, and its role as a narrator is entirely reactionary and emotionally distant.

Likely as a result of Dutch-English translation, a lot of the dialog is pretty thin and offers only surface-level exegesis of the events of the Bible. The result is that a lot of the dialogue comes off as either extremely corny, didactic, and/or preachy.

That the book engaged me as much as it did is a testament to its three authors and their desire to interrogate some incredibly bold and challenging concepts. Corien cites The Space Trilogy as one of its influences, and I can definitely see some of the layers of that idea baked into the design. It’s good enough, though, that I wanted more from it.

- Underdeveloped Premise that Wastes Some Potential
- Weak Dialogue and Exegesis

Dawn is somewhat disappointing but still manages to explore some ambitious ideas well!