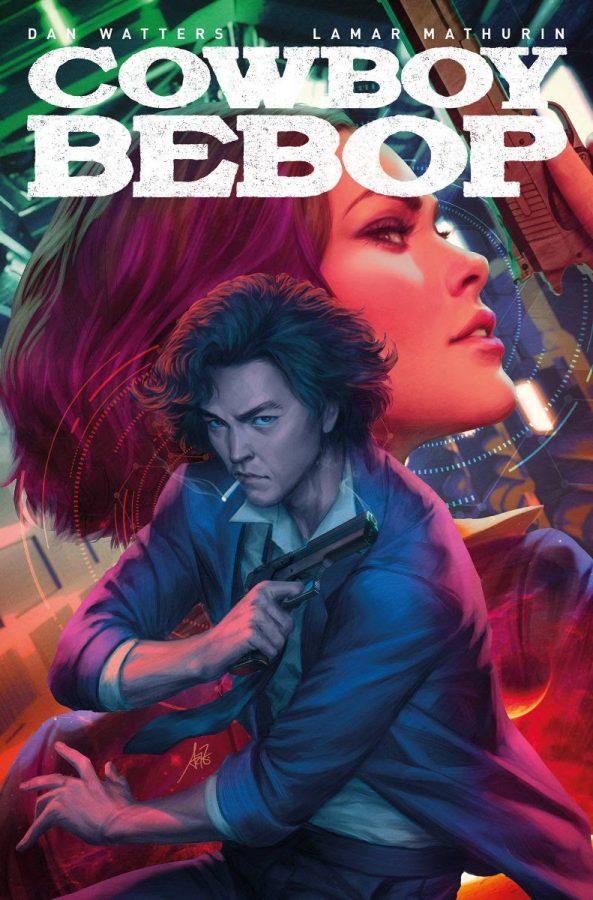 Netflix’s adaptation of Cowboy Bebop was released on November 19th of last year and was unfortunately canceled after one season less than a month later. While I appreciated the show for what it was, fans and critics joined forces with negative criticism. Arcane’s third and final act also premiered that same weekend, which I believe was the driving nail in the coffin. All of that to say, the only thing weirder than a live-action adaptation of Cowboy Bebop is a comic adaptation. After my time with the first issue from Titan Comics, it is unfortunate that the show won’t get a second chance, but maybe it can live on in comic form similar to how some shows have done in the past.

Spiritual Content: A character says he found the “God gene,” implying he can create anything by splicing parts together.

Violence: Characters get punched, kicked, and elbowed in the face. Two explosions occur; one engulfs multiple victims while the perpetrators escape. A security guard gets shot in the head; readers only see his silhouette accompanied by blood splatter. Another man gets shot in the eye; this instance is more visible with darker blood splatter.

Drugs/Alcohol: An early scene shows characters sitting around bars and gambling tables with alcoholic drinks, while some panels show them drinking from a glass. Multiple characters smoke cigarettes or hold them in their hands.

The title of this first issue of Cowboy Bebop is titled “Supernova Swing: Part 1”. We first see the Bebop crew at a casino on the trail of a bounty, and as per usual, things go wrong. However, this bounty is unique in that he wears a particular piece of gear that makes unlucky things happen around him. The crew gets a second shot at their lead and sets out to make a second attempt at catching their big score, which rose in price after the first attempt. So, the results of the failed pursuit can’t be blamed on our favorite space cowboys. This story was much more engaging than I anticipated — my expectations were meager going into this comic.

While I dig the cover art by Stanley Lau, Lamar Mathurin’s art took some time to grow on me. His work on this comic brings a style that compliments the source material. The use of color reminds strongly resembles the intro of both the anime and Netflix shows. The casino, in particular, was an excellent opportunity to showcase that, considering such a place is usually full of bright colors. Then, we see the opposite in more dark and dreary locations with much less color, yet it still lines the pages. I truly began to appreciate Mathurin’s work when I realized how much it resembles the abstract and exaggerated work of Mike Mignola, though I’m not quite a fan of how he draws Spike on some panels.

The action on the pages, whether it’s gunshots, hand-to-hand combat, or even a guy playing saxophone, is a visual treat. We get to see Spike’s signature Jeet Kun Do fighting style on display, as he kicks one guy up in the air in one panel and cracks another in the face with an elbow in the next. Another personal highlight is the chase sequence in which the bounty escapes as Faye chases him down. Those particular moments are accompanied by explosions and graphic imagery of a guard being shot. In short, if you’re looking for something action-packed to read, it seems there will be plenty of it in this series. As this is only the first issue, I expect the dial to be turned up further down the road.

As for when this comic takes place, it seems as though it is outside of the Netflix show’s events. I bring up the timeline because a character who appears in the final episode is nowhere to be found in this issue. They could possibly show up in future issues. I feel that won’t be the case, though I would love to be wrong. My assumption is that this comic exists on its own with anticipation that we’d be getting more from the Netflix show. After the final issue, this comic is likely the last we will see of this interpretation.

After reading this first issue, I’m reminded that I’d like to see the show carry on, but I seem to be part of a tiny crowd that would. “Supernova Swing” is a fun read, but while I’m curious to see where it goes, I won’t be longing to find out either. This comic successfully maintains a strong balance of style inspired by the original show while having to look like the Netflix series. The timing of this release is sadly unlucky, which is ironic considering the book’s theme. I find myself hard-pressed to give you a reason to pick up this first issue, but it might be worth waiting until the full collection comes out in graphic novel form over the summer for those interested. Despite the show’s cancellation, Titan Comics is still releasing this comic, and they have my respect for doing so.

- The way some characters are drawn

For a story about luck, the existence of this comic is as unfortunate as the cancelation of the show.