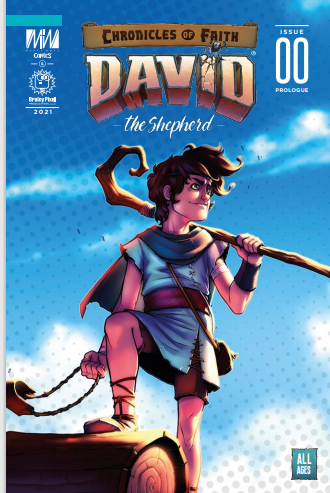 It’s a scene played out the world over. As life in the home winds down for the night, a father draws the blankets over his children. He leans down for one final kiss, and a small voice pipes up:

Ivan Anaya’s new comic series, Chronicles of Faith, opens with such a premise. As David describes his famous duel against Goliath, a young Solomon interrupts. He knows that story, he protests… everyone knows that story. The future king of Israel, perhaps expressing wisdom from an early age, requests a deeper, more overarching narrative. He wants to hear about David’s adventures from the beginning, from his lowly sheep-herding days to his rise of God-fearing king.

“So you want to hear the entire story?” his father laughs before obliging. But he reminds young Solomon of one very important fact: David’s story is not just David’s story. His tale is, more importantly, about a faithful God who helped the shepherd boy ward off bears, lions, vengeful kings, and yes, even giants.

Violence: A young sheep tumbles down a hill, injuring itself. David knocks out the tooth of a bear.

Spiritual Content: Scripture is quoted or paraphrased by characters. The main story focuses on Solomon and David, with panels referencing David’s battle with Goliath, who is called a Nephilim.

Positive Content: David relies wholeheartedly on God both as a young man and a king; as a father, he wishes to use his own experiences to positively influence his son. David braves bad weather and a ferocious bear to rescue his missing lamb.

This reviewer received a copy of this comic for free from the publishers.

According to Mercy Ways Studios’ website, Chronicles of Faith retells the stories of biblical heroes for younger readers. The website promises stories that are both visually engaging, drawing readers into an elaborate world, while also maintaining theological accuracy. Starting with the life of King David (an arc, according to the website, which will last at least four issues), Chronicles of Faith uses the Solomon/David frame tale to guide readers into David’s childhood.

I’m not overly familiar with Bible stories written in a graphic medium. I’ve looked at The Action Bible and know of a few comic series which reinterpret biblical tales with more fantastical settings. Anaya’s methodology feels more straightforward. The Solomon/David frame story is a perfect concept to introduce characters and conflicts, giving David a real, powerful purpose for recounting his formative years. I know the Bible isn’t clear on exactly how or when Solomon learned of his father’s history, but Anaya’s concept is remarkably relatable and wonderfully simple. I remember the years my own father spent reading books to me, fostering my imagination. It makes perfect sense that David could have described his adventures to his son before bedtime. The writer embeds his retelling with David’s desire to teach Solomon, giving Anaya a genuine purpose for sharing stories readers may already be familiar with.

Solomon’s comment about his father’s famous fight resonated with me as a reader from the get-go. “Everyone always says: ‘And David defeated Goliath,’” the boy tells David. You get the feeling Anaya is commenting on how widespread the “David and Goliath” story has become. We call underdog narratives “David and Goliath” stories to epitomize the struggle of the weak against the strong or the small against the big. It’s one of David’s defining moments, frequently reinterpreted in other forms of media (like that time a little asparagus took down a giant pickle). Anaya wisely sidesteps this pervasive plot for a more introspective look at other aspects of David’s life.

We’re introduced to a shepherd watching his small flock yet trusting God in moments of peril or crisis. The issue’s second half details an incident where David rescues a missing sheep from a hungry bear, showing the boy’s courage and faith from a young age. This particular story isn’t specifically biblical – we know, according to 1 Samuel, that David protected his sheep from a bear, even if the details are limited – but that isn’t a problem to get hung up on. Anaya delivers details readers wouldn’t necessarily be provided from the biblical text, not to inflate the story but to give a visual interpretation of what could have occurred. As a result, he constructs an engaging sequence that’s suitably action-packed but clean for his younger readers while relying on themes of courage and trust.

David vs. a Bear

Not all who Wander…

Here and there, Anaya takes a few creative liberties with his source material, but I believe readers would be hard-pressed to complain. David realizes he needs to rescue his missing lamb – a Disney-esque animal sidekick named “Sheepy” – after counting 99 of the 100 sheep in his flock. Anaya, it appears, associates David’s story to Jesus’ parable about the missing sheep. The first episode of the second season of The Chosen used a similar tactic. Jesus, while delivering a sermon, converses with a shepherd who recounts finding a lost sheep. Again, the Bible doesn’t specifically ascribe the lost sheep parable to this individual or David, but both the show and Anaya are making a point. What matters is the story’s message, not the details. By finding Sheepy, David reinforces his trust in God; his story becomes a lesson for us, with David a stand-in for a God who seeks us out when we wander.

This same process also allows Anaya to introduce some tongue-in-cheek humor. During a conversation with Sheepy, David explains that he is a shepherd to the flock just as God is David’s shepherd. Immediately afterward, he mentally notes that he should write those words down (“The Lord is my shepherd…”), a clever nod to David’s contributions to the Psalms. Granted, this level of humor will be most beneficial to readers “in the know,” as it were, capable of catching Anaya’s links to Scripture. But the biblical references themselves point not only to Anaya’s own understanding but his ability to creatively anchor his narrative in faith. Instead of forcing heaps of verses upon his young readers, he ties Scripture into the story itself.

The issue, with its cartoon-esque illustrations, certainly seems geared towards a younger audience. Fortunately, Anaya has not dumbed-down the narrative or redirected its focus. He makes David’s reliance on God effortlessly clear – primarily through panels depicting David praying in moments of trouble – thematically weaving the concept through the entire issue. Younger readers, while hopefully engrossed in David’s adventures, should also grasp the powerful message the writer constructs. If David, even as a young boy, could rely on God’s strength and wisdom during difficult situations, how can readers do the same?

Anaya’s first issue leaves me curious about the scope of the rest of the series. He appears to be using the next four issues to tell more of David’s story, hopefully utilizing the same, strong premise he relies on here. Solomon alludes to other characters and tales from his father’s life – David’s friendship with Jonathan and his flight from King Saul – perhaps foreshadowing the events Anaya may retell with further issues. Familiar as readers could be with the biblical David, they may be curious to follow this series and see how Anaya shows events, not just through biblical exposition, but through David’s perspective. Anaya has positioned himself in a clever spot – though he’s reliant on Scripture, he’s also dependent on his own imagination and storytelling prowess. He strings together elements Scripture may not be as clear on, such as depicting how an actual confrontation between David and a bear could have gone down.

A story for another night…

Readers partaking in this first issue should be interested in seeing where the series goes next. How can Anaya dramatize the friendship between Jonathan and David while remaining biblically faithful? How can King Saul’s rage be displayed in a way to teach younger readers? And how will David’s story remain founded on the cornerstone of God as the series progresses? Anaya never loses sight of his goal during this first issue, and I hope he maintains that central theme – David’s reliance on God and His love (and, by extension, our own trust in Him) – throughout the remaining issues of this series.

- Fans may take some umbrage with a few creative liberties

Ivan Anaya creates an engaging first issue for what should be an inspirational series, particularly for younger readers, as he explores the past of one of Scripture's greatest heroes.