Review – Apropos of Nothing 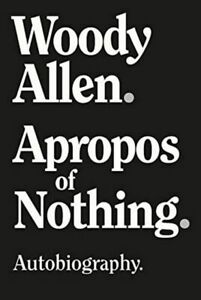 Woody Allen has had an amazing and controversial career. He was one of the most influential and beloved comedians of the 1970s, making great films like Sleeper, Annie Hall, and Manhattan at the height of his success. Then in 1992, he was wrapped up in a horrific sexual abuse allegation that was brought to the forefront again with the onslaught of the #MeToo movement. As a result, his name has become controversial. Last spring, in the midst of this controversy, he released his new memoir, partially as a rebuttal but also as a primer on his extensive career from the 1950s to 2020.

Drug/Alcohol Use: No drug use or heavy alcoholism

Spiritual Content: Themes of nihilism, meaninglessness, atheism, rejecting God, living as a non-practicing Jewish man in modern New York, and growing up in a religious culture

I can’t tell you why Woody Allen is one of my favorite artists. Then again I couldn’t tell you why I love many of the post-modern artists I like in general: Bergman, Welles, Tarantino, etc.

If anything, maybe I just enjoy the honest nihilism underpinning his work. Woody Allen is a philosophical materialist. He isn’t merely disinterested in God or metaphysics. Instead, he believes the universe and everything in it is gradually decaying and that all human effort and meaning will be destroyed with the inevitable heat death of the universe.

His best work all reflect this reality of impermanence. He mostly directs movies and writes books to fill time and fulfill himself creatively, regardless of what the critics say about him. He claims he barely pays attention to film criticism and just produces his work for his own artistic satisfaction. At the end of the day, what’s most important to him is finding some joy and distraction in the drudgery of his otherwise banal and meaningless life, whether that’s in cracking a joke or violating Jewish consumption rules to scarf down plate upon plate of pork ribs.

That’s a major theme in his new autobiography Apropos of Nothing. As the title would suggest, it’s a book about nothing important or meaningful. It’s merely the memoir of his early life as a slacker, know-nothing Jewish kid growing up in a 1940s New York City penthouse, with the caveat of immense wealth and success.

Naturally, we can’t go too far in a discussion of Woody Allen without discussing the elephant in the room – his sexual abuse allegations. The book was released last year. It was originally supposed to be released by the Hachette Book Group in March of 2020. Dozens of employees internally protested within the company on #MeToo concerns regarding his infamous 1992 allegations that he had abused his girlfriend’s adopted daughter Dylan Farrow. I won’t do you the disservice of relitigating the multiple trials, custody battles, government investigations, and the resurgent allegations of the #MeToo movement that serve as the backdrop of this book. It would be inappropriate for me to do so. Plus, other critics have made the case for his innocence or guilt, and I’ll leave it to you to decide if that situation makes the act of reading this book too distasteful.

Woody Allen does not care what the reader thinks, one way or another. The book does spend upwards of a fourth of its page count relitigating the events of his relationship and the ensuing custody battles and offering a comprehensive perspective of the trial from Allen’s perspective. One-fourth of the book is JUST Woody Allen defending himself and providing a comprehensive case for why the allegations made no sense to him and how Mia Farrow’s accusations were manifestations of a very ugly relationship implosion. Interestingly enough, he briefly defends #MeToo, calling it a necessary movement. He does, however, take exception to his name being dallied around with the likes of convicted rapists and media moguls.

There are some interesting discrepancies in the book. He says multiple times that he doesn’t care about or read criticism of his work or life, yet he seems to have sourced a number of his critics for quotes. For someone who doesn’t care about other people’s opinions, he is quite eager to pour out his own thoughts about himself to set the record straight.

Maybe that’s just part of his persona, though. Allen is nothing if not a self-loathing and neurotic man, for better and worse. If there’s anything he deeply emphasizes, it’s that the Woody Allen persona on-screen and the man who created it are two very different people. The self-styled intellectual we see in films like Stardust Memories and Manhattan is little compared to the quasi-intellectual man he claims to be. Sure he likes art and sex as much as the average Manhattanite. However, he hates classical literature, hasn’t seen many of the classics of cinema, and got into modern art so he could talk to women in high school. He’s every bit as self-loathing as his person suggests, but his ego isn’t half what one would expect.

Regardless, I couldn’t help but get sucked into Apropros of Nothing. Woody Allen is a writer who hasn’t produced a meaningfully excellent work of writing in the better part of a decade. This long, meandering, hypocritical work of prose was easily the most enjoyable and Woody Allen-esque work we’ve gotten from the Hollywood comedian in a long time. The voice and attitude we see here is the same Woody Allen we once saw in the 1970s, making classic movies like Annie Hall.

Much of the memoir is just him talking through the events of his career – his early days as a writer-for-hire, his standup career, his short-lived career as a playwright, the chaotic premiere of his first play Don’t Drink the Water (1967), the similar chaos of his first film What’s New Pussycat. It describes his bizarrely successful career as a deeply ineffectual Jazz musician, as well as going into detail about some of the interesting stories behind films like Bananas, Love and Death, Interiors, Zelig, Purple Rose of Cairo, Antz, and more!

All the while, it’s hard to say Woody Allen has some greater point behind the book. His piece is crammed with hundreds of anecdotes, jokes, and references to Hollywood ephemera to the point where it feels comprehensive, yet there’s not a central point to the memoir. As becomes clear, this isn’t a manifesto or a singular work with a point to express. At its best, it’s a riff at the strange pointlessness of a life of incredible wealth and prosperity. It’s a story about nothing. But it’s funny, filled with drama, and builds just to the realization that Woody Allen is a happy old man who has mostly worked out what it is he’s wanted in his life: freedom and love.

Apropos of Nothing may not be the most coherent book ever written, but it’s one of Allen’s best works of writing in decades. Thus, it establishes itself as one of my favorites of his works! If nothing else, it’s a notable piece in the late career of one of our greatest surviving artists.

Apropos of Nothing is a controversial, long, and messy book that thumbs at some of the most contentious issues in modern politics. That said, it's also a joyful, insightful, and engaging work which indulges in life's supposed meaninglessness, as seen by Hollywood's greatest comedic writer.