It’s finally time to see GGO Kirito in action! Well, eventually. You still have to get through most of the episode before that happens. Thankfully, the writers continue to weave an interesting enough story that it doesn’t feel bogged down or weary as we inch towards the episode’s battle. We continue to learn more about GGO, including its legal gray zone status in both America and Japan, as well as the details of how the Bullet of Bullets (BoB) will go down. Oh, yeah, and Sinon finally finds out that Kirito is a guy.

Truthfully, this is the one gripe Christians should have about this episode. There were plenty of ways to have this happen. The writers (and, probably, the original author) decided to have it happen in the changing room, after Sinon (in-game) removes her clothing and is only in her underwear. You can check the content guide for the periods of time where we actually see her standing around in her underwear. Granted, I could try to put a positive spin on this whole situation and say that at least they portrayed Kirito well and made him fess up once he realized that Sinon was that comfortable around him, but why should I? The fact is, there were other ways they could have gone about bringing up this plot point without the fanservice, no matter how mild it may be. Yes, this does ultimately lead to Sinon having a change in feelings towards Kirito, which sparks what I’m going to call a rivalry, but, again, there were certainly more tasteful ways it could have been done. How about Sinon finding out who Kirito really is and thus being spurred on by competition? Wouldn’t that have worked? But, then again, we’ve seen most (if not all) of the female characters in their underwear throughout this show, so they had to keep up with the par, right?

Okay, I’ve spent too long ranting about something that honestly didn’t rub me as raw as it probably sounds. This stuff doesn’t need to be in the show, to be sure, but I’ve certainly seen worse in terms of how graphic the fanservice is. Beyond that point, we finally get to see Kirito enter into his first battle, and while he probably performs better than any newbie realistically would, he certainly doesn’t blow the competition away. Kirito takes a few hits before he figures out a strategy, and his extensive experience with online games thankfully gives us a realistic explanation for why he can adapt so quickly (better than dealing with a Mary Sue character, at least). We also get to see Kirito make contact with Death Gun in this episode, and the information that’s revealed may or may not be surprising.

Overall, “Gun and Sword” continues the strong start that SAO II has had, albeit with a bit of a hiccup that we Christian viewers can agree could have been left out.

Let Kirito’s predicament be a lesson to us all. By allowing Sinon to continue believing he was a girl, he ultimately put himself in an uncomfortable position that forced him to reveal his gender, which–in turn–caused Sinon to be quite angry at him. What started out as a potential friendship has now been wrecked, simply because Kirito wasn’t honest. As Christians, we’re expected to be honest, and to further drive home the point let’s look at what will happen to liars:

Revelation 21:8 – But the cowardly, the unbelieving, the vile, the murderers, the sexually immoral, those who practice magic arts, the idolaters and all liars–they will be consigned to the fiery lake of burning sulfur. This is the second death.

So we see straight from the Bible that lying is a sin. Why else would all liars be destined for the fiery lake of burning sulfur? Let’s face it: lying destroys trust. It destroys relationships. I can honestly say that it very well could have destroyed my relationship with my (then) fiancee, (now) wife. Even though Christ saving me ultimately saved my relationship, there was still a damage to the trust my fiancee had in me when she found out everything that I had been doing. Kirito has lost the friendship of someone he barely knew, but who was nice to him nonetheless. And who knows what kind of repercussions this may have on him in the future? At least in his case he could leave the game and never have to deal with Sinon again. We don’t have that luxury. Is saving yourself a bit of discomfort by telling a convenient lie really worth damaging your relationship with another person? And, more importantly, is it really worth sinning against God?

Violence: A character is slapped in the face (although we don’t see the actual slap); typical GGO violence–people being shot and shot at, plus a character is stabbed (in game).

Blood/Gore: Just the red marks that appear when a character is shot. 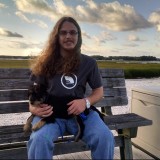 Christian, anime fan, and gamer are a few words you could use to describe me. I've been a Christian since 2012 (and thought I was one prior to that), although I'm far from having the Christian walk down pat. At one point I started thinking about how I could use various things for Christ, and eventually put my thoughts to action, resulting in Cosplay for Christ (my attempt at a cosplay ministry) and Christian Anime Review (my review blog). As you can imagine, I enjoy playing games, watching anime, and going to anime conventions. I also like to build Gundam models, fiddle with the guitar (occasionally), and listen to music (mostly Christian rock and metal).