I’d never been to a holiday-themed convention before Holiday Matsuri, and it was a great first! This festive, three-day event has a been a December treat in Orlando, Florida, since 2011. Though it is a multi-genre convention, it is primarily focused on anime with the latter half its name meaning “festival” in Japanese, featuring chibi snow bunnies as mascots, and starring special guests primarily in anime roles. To say I was psyched to go is an understatement!

Though I could only attend Holiday Matsuri on Saturday, I feel like I experienced some of the best this convention had to offer! Holiday Matsuri may be small, but it is very popular. When my fellow attendees and I drove to the host hotel at the Marriot, we encountered heavy traffic on the way. One of my friends and I actually had to walk the remainder of our journey to the convention (an 8-10 minute walk), while my other friend was stuck in traffic where eventually she was sent to overflow parking and had to shuttle over to the hotel.

When my friend and I reached the hotel, after asking directions a few times, we managed to find the registration at around 12 p.m. where I was shocked to find that the line was nearly non-existent, despite the volume of guests in the halls. We quickly got our wristbands (three-day attendees receive a plastic pass) and headed straight to a voice actor panel, featuring J. Michael Tatum (Attack on Titan, Black Butler), Fred Tatasciore (Mass Effect, Gears of War), Charlet Chung (Overwatch, Call of Duty: Black OPs III), and Brandon McInnis (NANBAKA, 91 Days). We actually passed the ballroom it was to be held in because we thought it wasn’t crowded enough for the panel, especially since it was only half-an-hour before the panel was meant to start. However, we did eventually score good seats and the ballroom decently filled.

I very much enjoyed listening to these four talented actors answer many questions from scores of fans. I laughed out loud at their answers to questions such as “If you could combine two animals which two would you pick?” Tatasciore responded, “A giraffe and a goldfish.” When they were asked which one of their characters’ fictional worlds they would live in, Tatum responded, “Not Attack on Titan.” On a more serious note, I was particularly touched when a man with a stutter asked the actors what advice they had for someone with a severe speech impediment who wanted to make a career in voice acting. J. Michael Tatum replied with an inspiring monologue about how he had a speech impediment himself, much like Alan Rickman and James Earl Jones, and how he developed his strongest voice through acting.

After this great opening event for my convention experience, I hit the vendors hall where I perused the vast array of artwork and wares. Though I’m used to a much larger amount of variety, there was still a decent selection of possible holiday gifts to purchase. The vendor’s section was certainly larger than the artist’s section, which was a bit disappointing to me, but I still managed to find many beautiful artwork and goodies to take home, including fantastic Fullmetal Alchemist, Avatar: The Last Airbender, and Logan artwork at great deals, a Hunger Games and Panera Bread crossover t-shirt half off, and a Fate/Zero keychain featuring Rider and Waver. 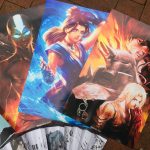 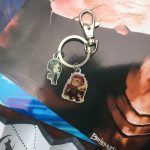 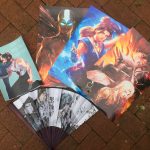 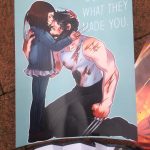 After about an hour walking through the vendors’ hall, I saw most of what there was to see before it was time to get in line for J. Michael Tatum! He is a voice acting legend and a personal bucket list actor I just had to get an autograph from. My friend saved me a place in line, so I didn’t have to wait too long (perhaps twenty minutes) to see the voice behind Sebastien Michaelis, Erwin Smith, Steven A. Starphase, and so many more characters. He was friendly, kind, and quick-witted. I had him sign a Black Butler hand fan next to Brina Palencia’s signature and he told me, “I love meeting my fans.”

The cosplay game was definitely at its height, with many quality costumes creatively made-over in the Christmas spirit! My top two favorites had to have been Ed and Alphonse Elric from Fullmetal Alchemist and the Grinch from The Grinch Who Stole Christmas. My interaction with the Grinch cosplayer made my convention. While waiting in line to see Tatum, I saw this amazing Grinch cosplayer walking by completely in character and making obnoxious and spiteful comments. I asked him if I could have a photo with him and he said, “Sometimes you can’t get what you want in life.” And then he proceeded to stomp away. I pursued, and he consented to a picture. I told him thank you and he told me to scram. 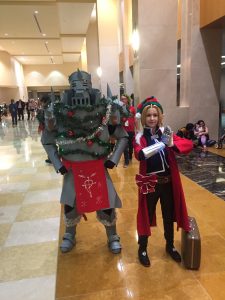 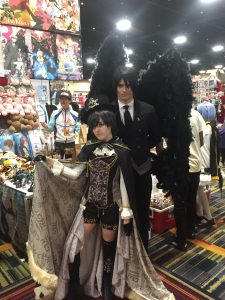 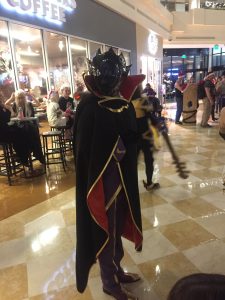 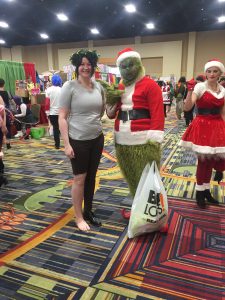 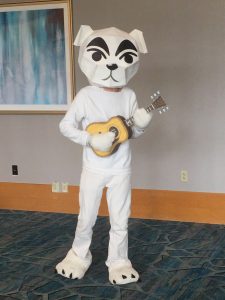 I finished my time at Holiday Matsuri with a photoshoot in front of the Hotel Marriot’s lovely Christmas decorations, including a giant Christmas tree, a garland-wrapped balcony, and an elaborate Christmas display with fake snow, a white fence, fir trees, and even an entire train made out of chocolate! 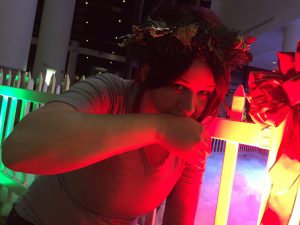 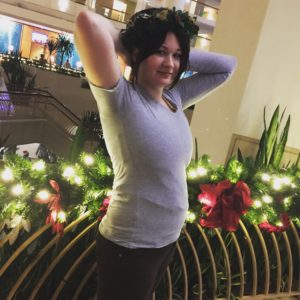 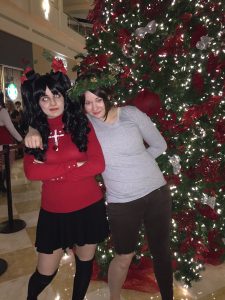 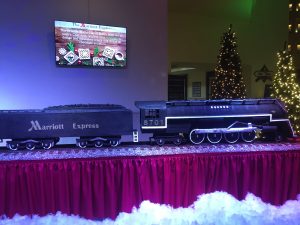 Holiday Matsuri is a quaint but growing convention where you can’t help but get into the Christmas spirit while letting your geeky side shine. I would love to attend again in the future!

Victoria Grace Howell is an artist and aspiring speculative fiction writer. She received Teen Writer of the Year in 2014 at the Florida Christian Writers Conference , a conference she attended since 2010, and the Believers Trust Award in 2015. When she's not writing her books or articles, she enjoys drawing her characters, playing the piano and practicing Kung Fu.